Hello and thank you for joining me again for another episode of my usual musings and ramblings.

Before I go any further, however, I think I need to put things straight. If my last post gave some of you the impression that churning out blog posts has become just another chore, let me tell you that it hasn't and that I have absolutely no intentions to stop blogging. Au contraire, I couldn't live without it and the only regret I've got is that I didn't start blogging sooner. Furthermore, it has been my blog and my wonderful bloggy friends and readers (yes, that's you!) who have kept me sane all these years, in particular the last two! So, let's continue where we left off, shall we?
Saturday the 7th of May had a sunny start, with some patches of clouds in the afternoon. There was no sign of the forecasted rain, but still a bit windy and at 20°C it was the perfect opportunity to wear one of my short-sleeved flower infused Diolen Delights.
Found at Think Twice pre-blog, in the Summer of 2015, there would be quite a few entries if I were to do a Sheila style Flashback on it. I know for a fact that it went to Wales with me in June 2016 and that it accompanied me to Bruges in April 2019, so it's safe to say it's a well-travelled dress! 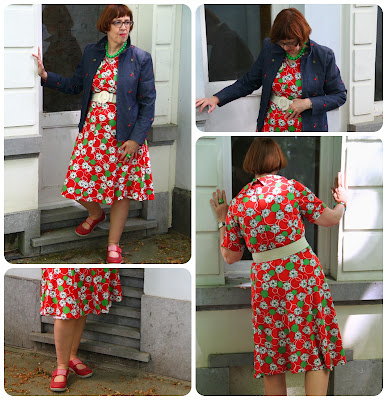 It has also been at least once before to the destination I took it to that afternoon. And no, this is not Dove Cottage I'm standing in front of. Our house might be tiny, but it's still quite a bit bigger than this one, which is part of a row of fake houses. Now, where else can it be than in the very place where nothing is what it seems: Middelheim Sculpture Park.
This make-believe street is a work of art, of course. It's called Surroundings, dates from 1972-73, and its creator is the Italian artist Alik Cavaliere (1926-1998). I forgot to take a photo of the complete installation, but you can see it here, on the museum's website.
Further outfit details:
Flower embroidered denim jacket: Think Twice
Green apple ring and beaded necklace: Charity shopped
Cream stretchy belt and my beloved red Clarks Cloudsteppers: retail 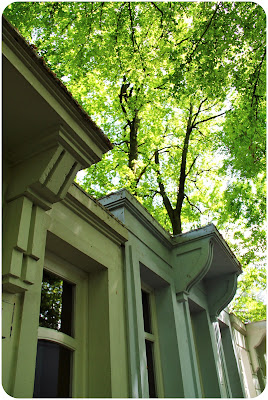 I'm not sure what Surroundings is all about, the but the artist himself summed it up as follows: "I have always used material like a director does, or a storyteller. I work with memory and try to find paths, labyrinths, where I can meet spectators and then get lost with them in the work itself. That can happen both psychologically and physically."
Not sure if that makes you any the wiser though. 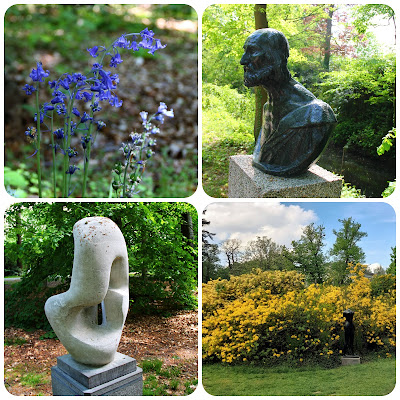 As usual, we wandered at will, without any itinerary whatsoever, meeting works of art along the way. Some of these feel like old acquaintances, like Dr. Koeberlé (1914, top right) by sculptor Emile-Antoine Bourdelle (1861-1929), one of a series of busts which greet you soon after stepping through the park's main entrance.
Among the Bluebells and other wildflowers, an enigma (bottom left), Forme Inhumaine (1954-55) by André Bloc(1896-1966). 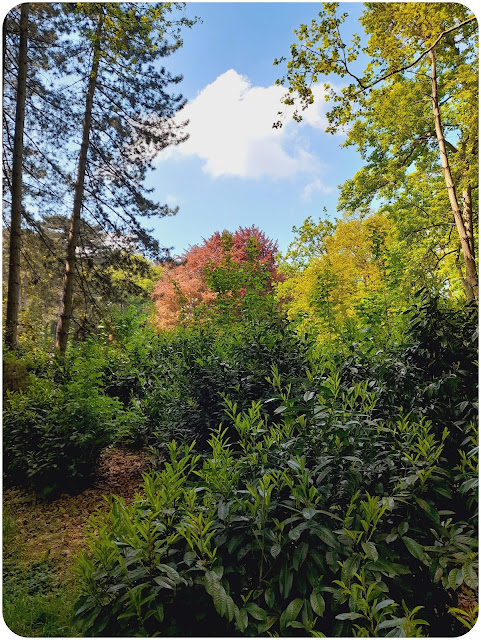 We took the path running at the edge of the park, and were spellbound by this view. Half-closing our eyes, the patch of white clouds seemed to be taking on the form of a snow-capped mountain peak.
The path was lined with a true menagerie of sculptures, as most of them were representing animals of some kind, even if we had to read the plaques on some of them to find out what they were exactly.
There were birds (top left and right), a very obvious bull, and a cow, the latter of which Jos insisted on keeping company as they were both born in the same year! We were nearing the Braem Pavillion by now, its whiteness more brilliant than we'd ever seen it before. Not surprisingly, as its brick exterior is currently being repainted!
Jos snapped the photo below, top left, through one of the wings of the big black bird you can see in the above collage. 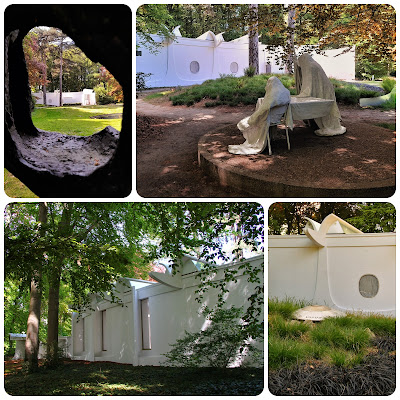 Facing the pavillion are two ghost-like plaster figures seated at a table. This sculpture is called Dialogue (1974) and it's the work of Antwerp-based but German-born sculptor Albert Szukalski (1945-2000).
He used living people as the models for plaster figures, laying lengths of fabric soaked in plaster over their bodies and allowing them to harden. The remaining husks of pale plaster were then coated in polyester to weatherproof them. 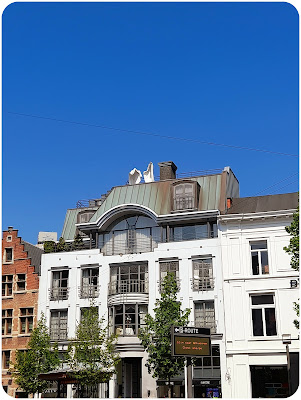 As I was walking to Antwerp's botanical garden the other week, I spotted one of his ghostly works on top of a building. 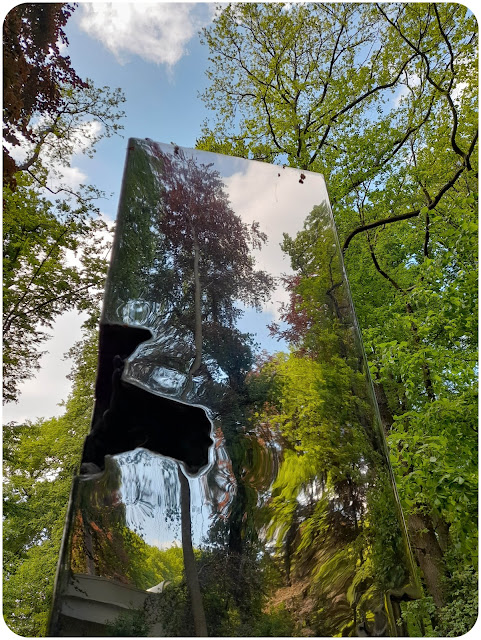 One of our favourites, which we revisit again and again, and which has appeared on the blog many a time, is Kolom by Belgian artist Felix Roulin (1975). This polished metal column has one or more human figures trapped inside, different body parts of whom can be seen through holes in the column.
Its main attraction for me, however, are the distorted reflections it offers, creating endless photo opportunities. 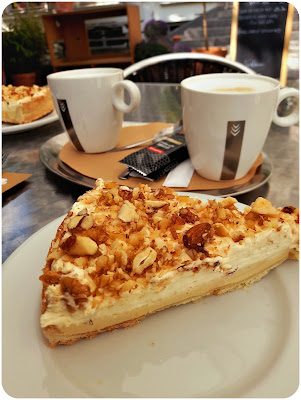 We ended our walk by gravitating towards the museum café, where we sat ourselves down on one of the tables on the terrace and indulged in huge slices of flan with a generous layer of cream and topped with nuts.
Those slices were so huge and filling that we skipped our evening meal and had a quick sandwich instead. I'm making a mental note to order only one slice for the two of us next time! 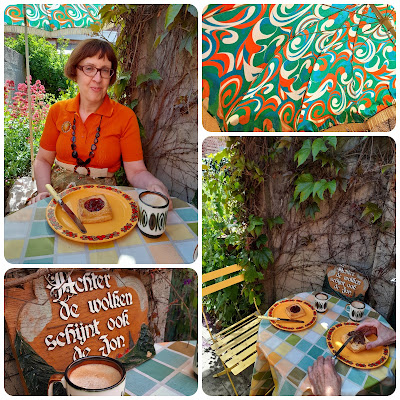 Sunday was a gorgeously sunny Spring day, even if the mercury never reached 20°C.
In Dove Cottage's garden it was a couple of degrees warmer as usual, of course, and we even put up our funky 1970s parasol, which used to belong to my parents.
We were all out of bread, so Jos walked down to the bakery in the village to get a loaf and some pastries, which we ate at our little courtyard table. We used the 1970s Emsa plates we'd scored at the indoor flea market back in April, while the mugs are vintage late 1960s Boch ones. The kitschy sign propped up against the wall of the shed was an old charity shop find and proclaims that the sun also shines behind the clouds! 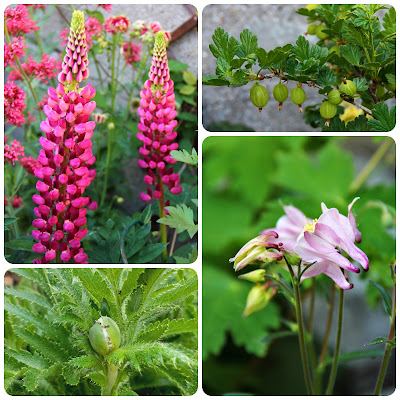 The garden continues to thrive and is becoming lusher by the minute, but this is what caught my eye that weekend. The first flush of the Lupine spikes are now almost over, but here they were still in their prime. They are Lupinus "My Castle", which is one of the tall Russell hybrids.
Once again, our tiny garden will yield a bumper crop of gooseberries (top right) and we were overjoyed to see the first of the flower buds in our Oriental Poppy (bottom left).
Aquilegia "Biedermeier" (bottom right), with its mass of pale pink flowers, seems to be the only of the Aquilegias I planted last year which hasn't been taken over by the overzealous "Nora Barlow". 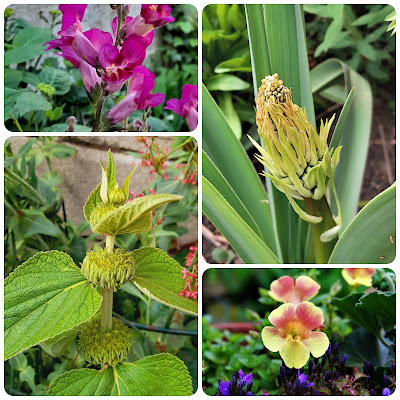 Both Kniphofia (top right) and Phlomis russeliana (bottom left) are slow burners, finally coming to life respectively one and two years after they were planted.
No such problems for the Snapdragons (top left) and Mimulus (bottom right), which are into their second year, having survived the - admittedly mild - Winter in our garden. 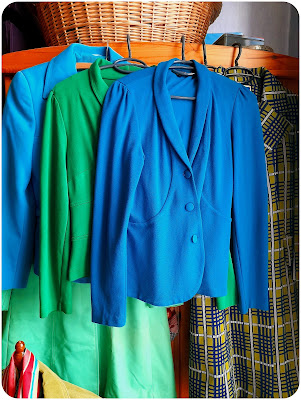 The rest of the day was spent pottering as usual. I did manage to exchange my Winter coats for my Spring ones, hanging some of them outside the full-to-bursting coats wardrobe ready to wear. Blue and green seem to feature prominently! 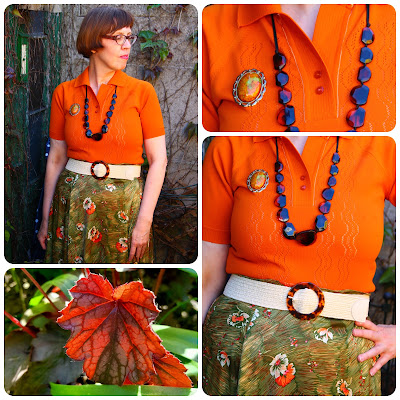 Finally, let's have a proper look at my outfit!
I was wearing the floral wrap skirt I charity shopped back in April, picking up the orange from its floral pattern with a vintage orange polo top. I merged the two with one of my stretchy belts with a faux tortoiseshell buckle.
For some reason, my necklace seems to take on a bluish hue in the photos, but its beads are tortoiseshell as well.  The gold rim of my brooch frames a mottled orange and green centre stone. 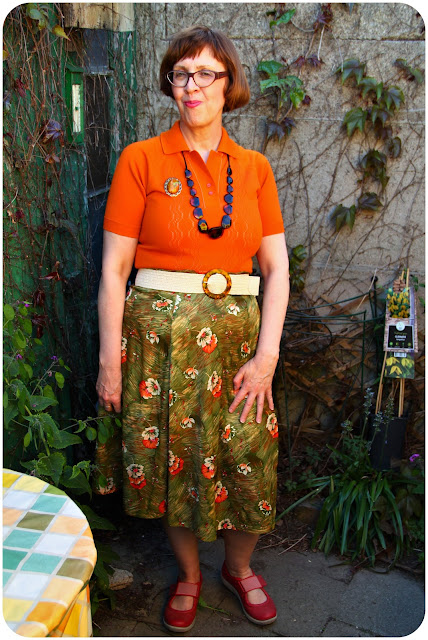 And once again my feet were happy in my ridiculously comfortable Clarks Cloudsteppers! It'll be a sad day when I finally have to let them go ... but let's not think about that just yet.
Posted by Polyester Princess at 19:29