May's penultimate Sunday was a gloriously sunny day on which the thermometer indicated highs of about 22°C. In spite of the perfect Spring weather, however, we were both quite inexplicably in a maudlin frame of mind.

After breakfast, which as on most Sundays consisted of one of Jos's cooked ones, I was aimlessly wandering through our downstairs rooms when I decided I could no longer bear to look at the dusty shelves of our various display cabinets. Admittedly, they were long overdue a thorough cleaning inside and out, so I made a start with the two vintage Barbie cabinets in the dining room. 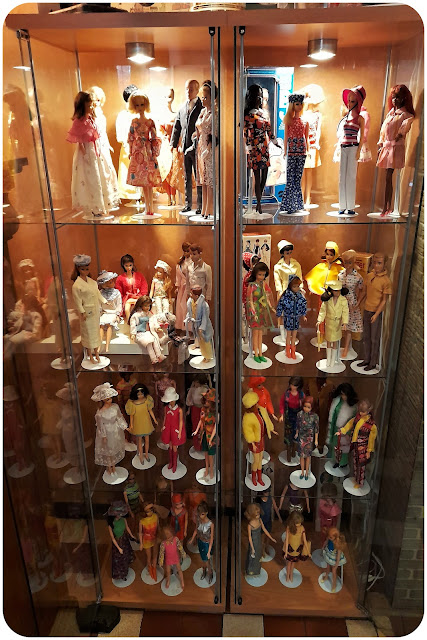 I was originally going to link to a photo of these cabinets from my blog, but much to my surprise I couldn't find one at all. How is it possible I never showed you these in over six years of blogging? Anyway, I had to quickly nip downstairs and snap a photo with my phone.

By the time I was finished, it was almost midday so, while having lunch, we discussed our options for the afternoon. Neither of us was in the mood for a longer walk, but we desperately needed to clear away the cobwebs, so we settled for a stroll in Walenhoek, a nature reserve  about 10 kilometers from our home. 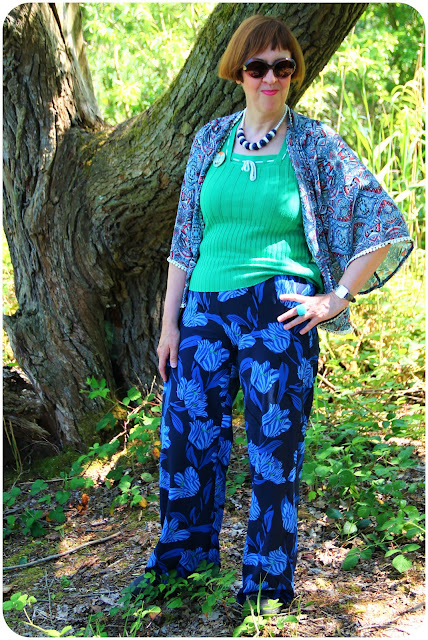 Having learned my lesson after being repeatedly bitten by ravenous insects this time last year, I not only slathered my arms in insect repellent, but also wore a pair of trousers instead of taking the risk of going bare-legged. The latter were a charity shop find back in January, and this was their first outing. 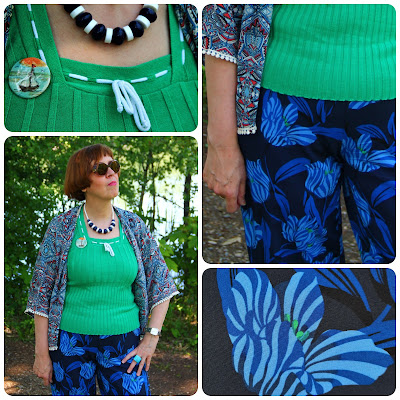 As I'm of the opinion that blue and green should definitely be seen, I combined the trousers with a green, sailor-style, short-sleeved knit top by Belgian label Who's That Girl. This too was charity shopped - my blog says in 2016 - as were the haori style cover-up and the navy and white beaded necklace. The ceramic seascape brooch was picked up in a crafts shop in Cardigan during our wet Welsh holiday in June 2017. 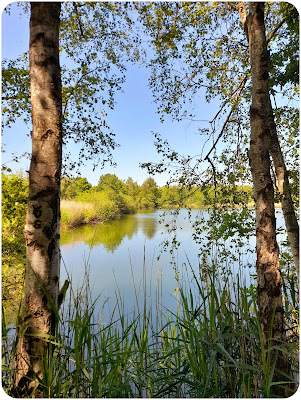 The area doesn't really need introducing, as most of you have walked here with me many times before.
It's one of the local nature reserves established on former clay pits, which the forces of nature soon reclaimed after the industry declined in the late 1970s. Now, it's the perfect place to catch one's breath, often in both senses of the word. 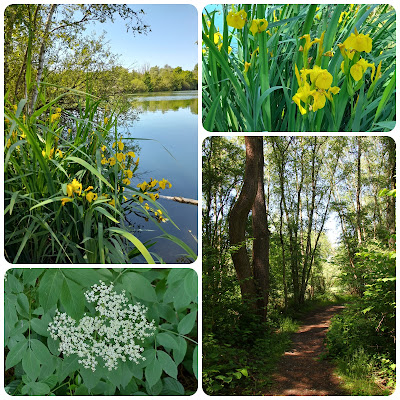 We decided on a short stroll this time, starting on shady woodland paths and making a loop around some of the domain's numerous ponds now flanked by yellow flag irises, their cheerful faces peeking from among their faintly bluish green sword-like foliage. There were frothy Elderberry flowers aplenty too. 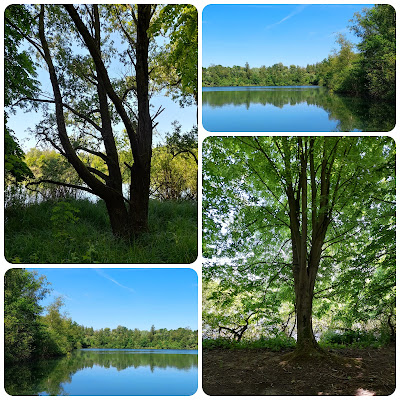 It seemed that quite a few people had had the same idea as us as we met several fellow walkers, either walking their dogs or on a family outing. Sadly, this meant that our favourite bench, on a spit of land jutting out into the largest of the ponds, was already taken.
At regular intervals, there were signs admonishing people to take their litter home. Not that this seemed to be making an iota of difference, as fly-tipping keeps being a major problem here. 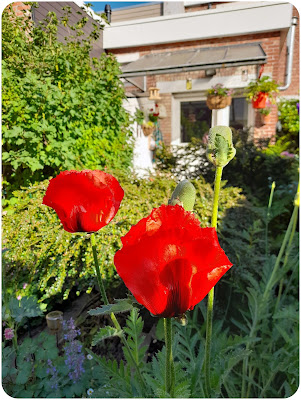 The working week started cloudy and overcast, the temperature again dropping below 20°C. My main gripe with the weather gods, however, was that they flicked the switch of their rain machine just as I was about to go home on both Monday and Tuesday so that I ended up getting thoroughly drenched.
Wednesday's humdrum office day was made better by Jos sending me a photo of the first two of the Oriental Poppies which had burst into life. I always think it's a wonder how those papery petals which have been neatly origami'd inside those tight-fitting buds can turn into such magnificent large cup-shaped flowers!
Equally magnificent are the indigo flower spikes of our Delphiniums they have to share their limelight with. 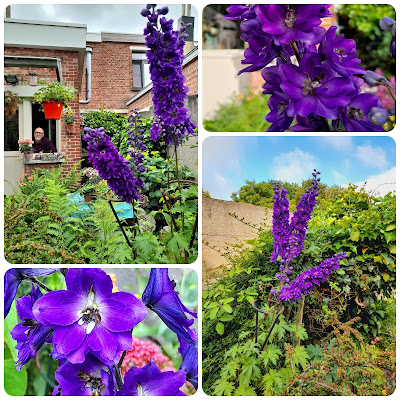 With no further sign of rain on the horizon, and the clouds having made way for some sunny spells, my lunchbreak walk took me to Think Twice (for Kezzie: the one in Kammenstraat!) where I was surprised to see another sales in full swing with everything down to € 4.
I managed to snap up a Berwin & Wolff skirt made in Germany, its hem trimmed with broderie anglaise, and a fudge coloured short-sleeved acrylic jumper with a bunch of tulips in its weave. 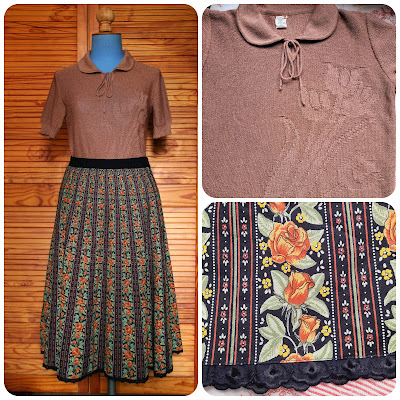 Thursday was Ascension Day, which is a public holiday in Belgium. This meant sleeping just that little bit longer, having a leisurely breakfast and taking my time to select my outfit for the day.
Instead of having the blues, I was wearing them!  After doing my wardrobe changeover, I thought I was missing some skirts, which eventually I found tucked away in a bottom drawer. Among them was this blue on white floral one, which was charity shopped last Summer. 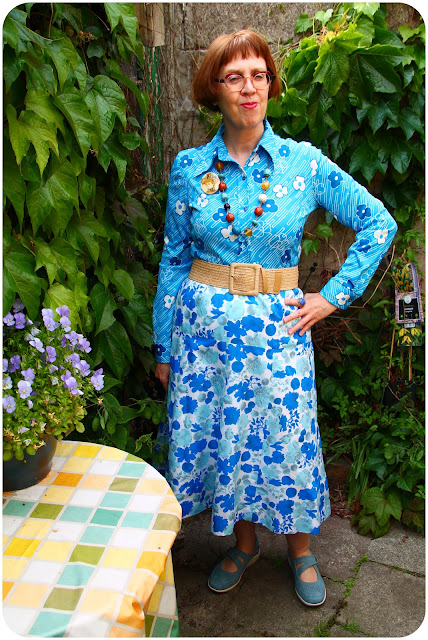 Taking it to my shelf of long-sleeved blouses and holding it up against several of them, it was love at first sight between the skirt and this vintage polyester blouse, with its pattern of stripes and naive flowers in matching shades of blue.
I married the two lovebirds by adding a stretchy raffia belt with a big rectangular raffia covered buckle, added one of my portrait of a lady brooches and a necklace featuring multi-coloured craquelé stones. I matched the latter with my blue-stoned ring. 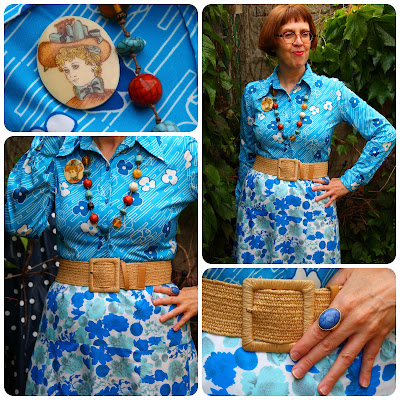 We had our friends Inneke and Maurice over for a long-overdue catch-up involving coffee, tea and apple cake. While Jos and Maurice - who weekly meet for a drink -  were chatting, Inneke and I went through my bags of discarded shoes, from which she selected two pairs. So glad at least some of these are going to a good home!
The rest of the day was spent not doing very much at all. I finally finished the late Lucinda Riley's 800-page The Missing Sister and pottered around house and garden. 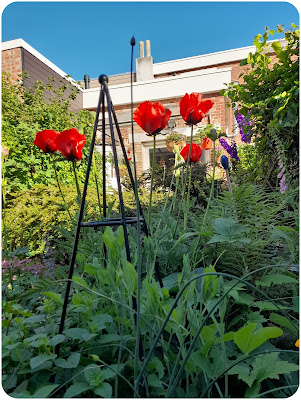 The two initial poppies had now been joined by several of their sisters - there would be a total of twelve in all - and look at how tall the Sweet Peas have become in such a short space of time. They are almost half-way up the obelisk now and I'm hoping they will start flowering soon! 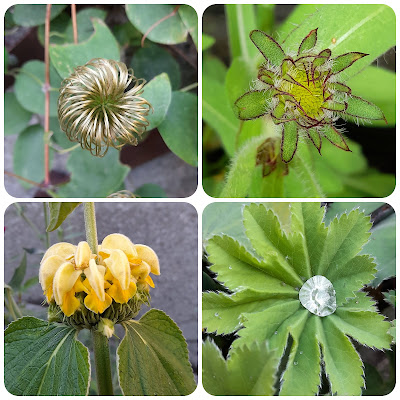 A photographic foray into the garden usually yields some oddities and curiosities. The seed heads of Clematis "Guernsey Cream" are almost as gorgeous and infinitely more fascinating than the flowers themselves.
On the top right, the ghostly beginnings of another survivor from last Summer, Gaillardia "Kobold", will soon develop into dazzling yellow-tipped red daisy-like flowers.
A single raindrop caught in a fuzzy Alchemilla mollis leaf caught my eye, as did the whorled clusters of pale yellow hooded flowers in our Phlomis russeliana. 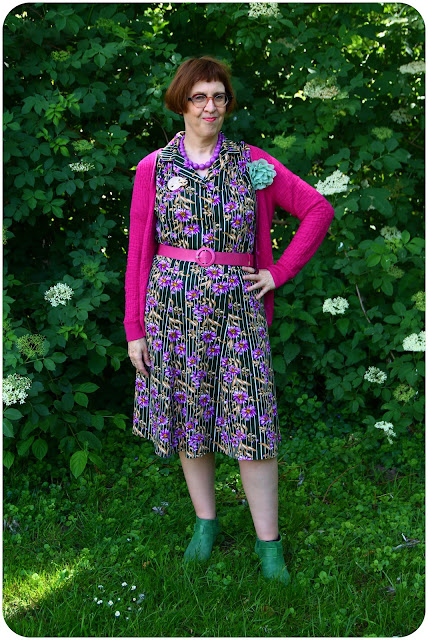 Although most people here took Friday off as well, I opted to go in to the office in order not to get too far behind with work. A decision I regretted by lunch time, as Antwerp's shopping streets were simply inundated with people, which made me turn heel and go back inside.
The measly 17°C we were treated to on Saturday the 28th of May was somewhat redeemed by the day's sunny outlook.
Browsing my wardrobe full of vintage dresses, this forest green frock patterned with purple yellow-hearted flowers called my name the loudest
Although there's no pink in its print,  I thought the fuchsia pink of my cardigan and belt was a close enough relative of the purple for them to get along nicely. My beaded necklace matched the colour of the flowers almost exactly. My faux Lea Stein cat brooch, in its turn, tied in with the fawn colour of the foliage in the pattern. 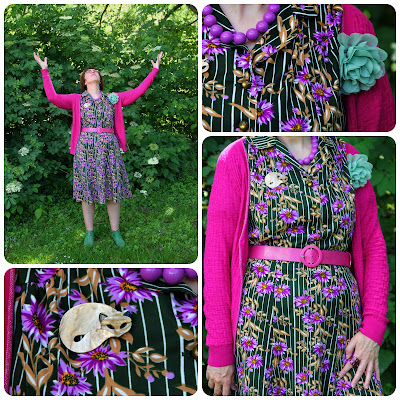 Different shades of green completed my outfit, as I pinned a fern green flower corsage to the cardigan, and wore my favourite bright green suede ankle boots.
We went on an impromptu visit to our favourite three-floored charity shop in Duffel that afternoon, which was unexpectedly successful. I'll show you what I found in my next post. 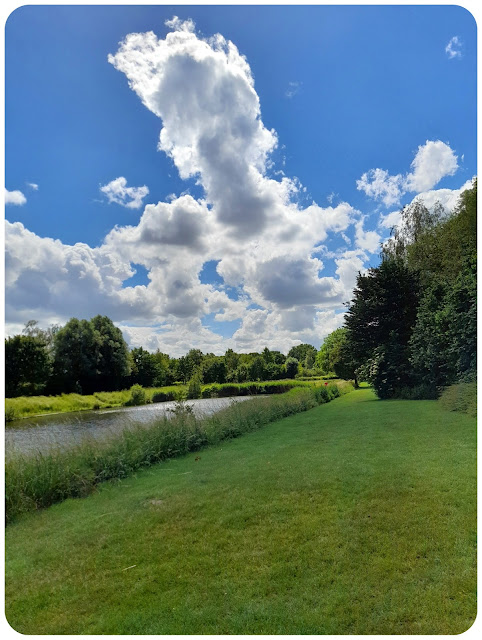 Afterwards, we took a short stroll through the park where we sat down on a bench and watched the world - and in particular, those marshmallow clouds - go by.
Posted by Polyester Princess at 19:27