Time has been slipping through my fingers again, so although the calendar is claiming we've reached the 10th of June, my blog hasn't even made it to this month yet!

In fact, Summer still seemed a long way off on Sunday the 29th of May. At a chilly 14°C and with the odd sunny spell alternating with cloudy ones and plenty of showers, it felt decidedly unsummery, the weather more suited to one of those famously fickle April days.

So, it was long sleeves and layers to the rescue once more! 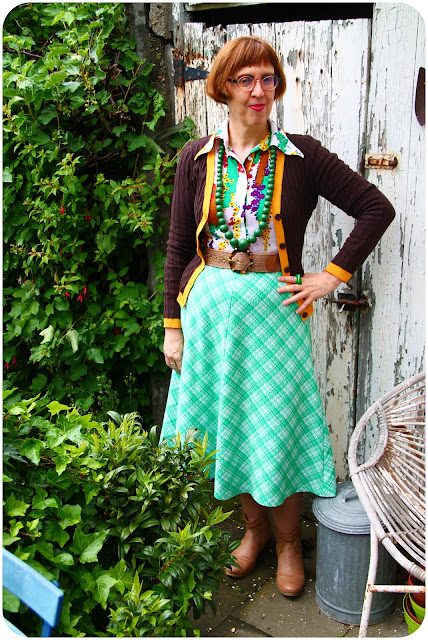 My green and white plaid polyester jersey skirt, which was an old Think Twice find, isn't exactly a Summer one either! Much as I love it, I'd rather be wearing lightweight cotton skirts this time of year.
As its main companion, I went for this wildly patterned long-sleeved vintage acryl blouse, its matching green joined by purple, yellow, red and tan. My blog tells me it was charity shopped in August last year, yet this was its first outing.
No such thing for the yellow trimmed chocolate brown cardigan. This is from a retro label called Zoë Loveborn and came to me by way of a charity shop many years ago. 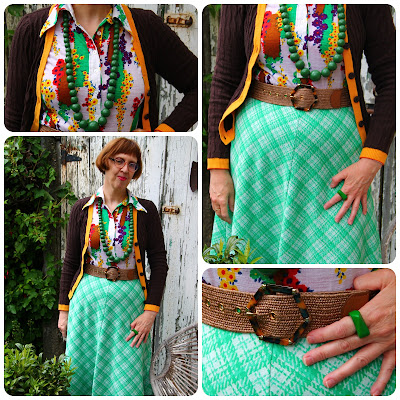 The long green necklace with its wooden beads was a present from my friend Inneke, while both my green plastic ring and stretchy belt with hexagonal faux-tortoise shell buckle were bought on the high street.
While we were taking photograph  I realized that, unusually, I wasn't wearing a brooch. Oh, never mind, surely I was still way more dressed up than the average person on a stay-at-home Sunday! 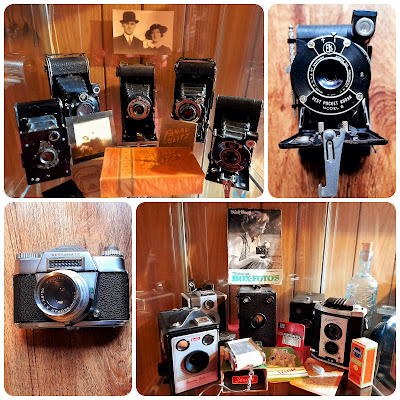 With the weather not playing nicely, going for a walk was out of the question. As was a pottering session in the garden. Instead, we donned our aprons, grabbed dusters, cleaning cloths and glass cleaner spray, and tackled the rest of Dove Cottage's display cabinets.
First up was our collection of antique cameras and photography equipment which lives in the hallway. 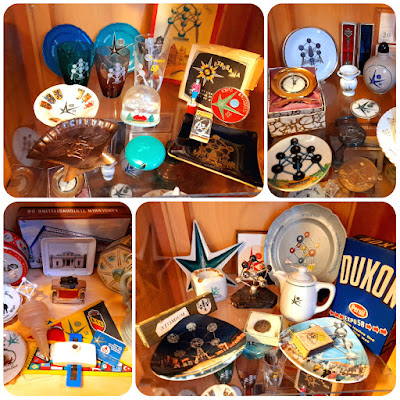 Then we moved to the sitting room where two more cabinets flank our sofa.
One of these contain a collection of Expo 58 memorabilia, which is mainly Jos's field of interest. He's been fascinated by Expo 58, the 1958 Brussels World's Fair which was held from April to October 1958, ever since he visited the fair as an impressionable 11-year old. 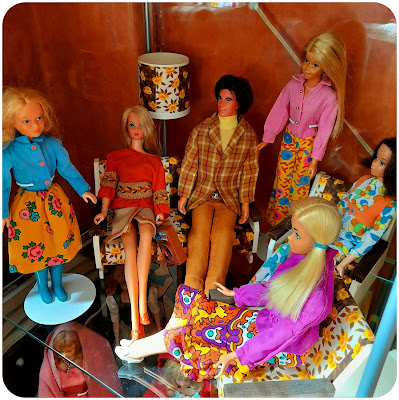 Opposite this cabinet is another one containing more of my vintage Barbies. Although I stopped collecting many years ago, I have close to 100 dolls and even more vintage Mattel outfits, all dating from around 1960 to the mid-1970s.
Here are some of my 1970s dolls lounging in their sitting room! The furniture was a flea market find but the majority of my dolls were acquired either on eBay or at specialist fairs. Finding vintage Barbie stuff on flea markets has become quite a rarity. 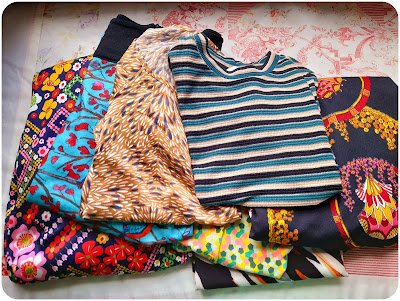 As we had a long weekend coming up - Monday the 6th of June was Whit Monday, a bank holiday in Belgium - I wouldn't be able to take my usual Friday off as well. However, as I couldn't face working a 5-day week, I took Wednesday the 1st of June off instead.
It was another day of sunny spells and showers, the mercury making the effort to climb to 17°C.
As Jos had other obligations that morning, I decided to tackle some of the things on my to-do list, starting with making photos of Saturday's charity shop finds. 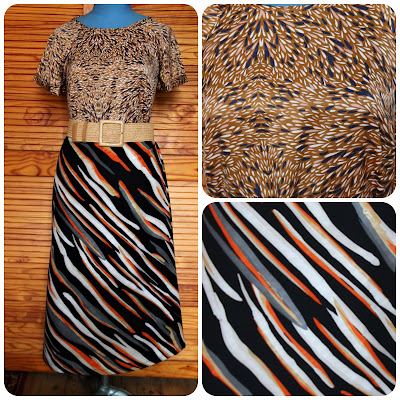 Our visit to the three-floored charity shop in Duffel had been a fruitful one, as I found no less than three skirts, three tops and a maxi dress.
The black midi skirt with its wavy grey, white, orange and yellow stripes is by Claude Arielle Couture, which I'd never heard of but which apparently is a Belgian label. I thought it went rather well with the caramel, white and blue patterned short-sleeved top, which is by the Danish Vero Moda label.
I don't generally look at labels when I'm shopping, but rather go by touch and sight. Neither do I look at size labels too much. Although clothing in this particular chain of charity shops is organized by size, it wouldn't be the first time that they got their sizes mixed up. Plus, sizing can be quite varied, which is why my wardrobe contains everything from an XS to an XL. 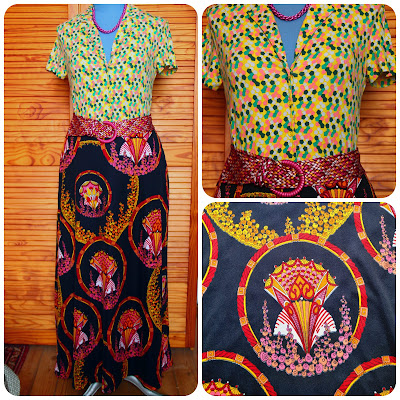 I couldn't believe my eyes when I spotted this vintage psychedelic maxi skirt which, in spite of initial doubts, fits me perfectly. The green, turquoise, pale blue and yellow patterned blouse I combined it with is by the Belgian Wow To Go label, and its pattern is pentagons, not dots. 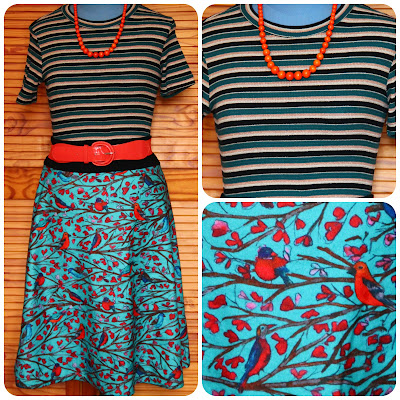 The final skirt and top combo consists of a delightful turquoise skirt in a felted fabric, patterned with orange and blue birds perched on branches, and a black, green and pinkish beige striped top by H&M. If you look carefully at the close-up on the top right, you might even detect a bit of sparkle in the latter.
I won't be giving Angelica the honour of modelling the maxi dress, nor will I offer you a look of me wearing it for the time being. I've packed it away in my holiday suitcase, and hope to give it its first outing in Shropshire. Just look at that glorious pattern, though! 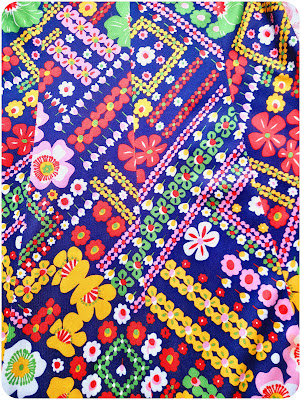 Right, back to Wednesday!
Clearly on a roll after making those photos, I then made a start with sorting out some travel essentials, made a shortlist of the clothes I would like to take on holiday, deadheaded and watered the pots in the garden and whizzed through the kitchen with a cleaning cloth. I had just finished when Jos got home around 1 pm.
After lunch, we drove to our local charity shop for a rummage, finding a couple more things in the process. I'll have to try and remember to make photos for a later post.
I was just on my way to the fitting rooms to try on my finds when I ran into my friend Inez, whom I hadn't seen for months.  A lot of squealing ensued, and we spent a happy hour or so having the mother of all catch ups while enjoying a cup of coffee in the shop's cafeteria. The rest of the afternoon was spent immersed in my latest read, which I find quite unputdownable.
It was back to work on Thursday, where I was faced with an extremely busy day which felt like a punishment for my lovely day off on Wednesday. It was sunny and the temperature had apparently climbed to 20°C. Not that I had time to enjoy any of this, as I worked flat out through my lunch break. 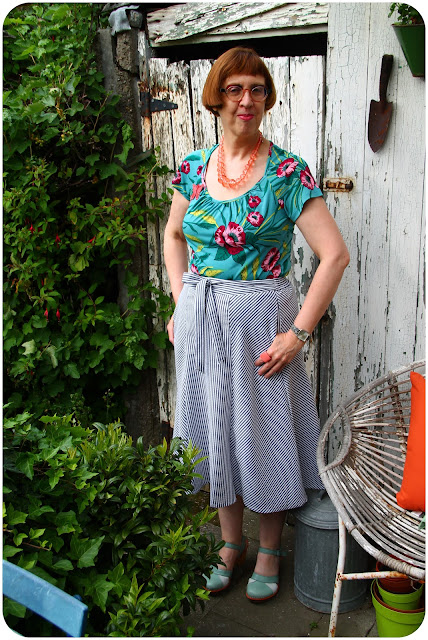 Work was still hectic, but less relentlessly so, on Friday. The weather gods had made another effort and treated us to a sunny and warm day with highs of about 24°C.
I've been seriously shirking my blogger duties lately, hardly ever making the effort to take outfit photos after work. Being home just that little bit earlier that Friday, we stepped out into the garden, so that I could show you what I was wearing. 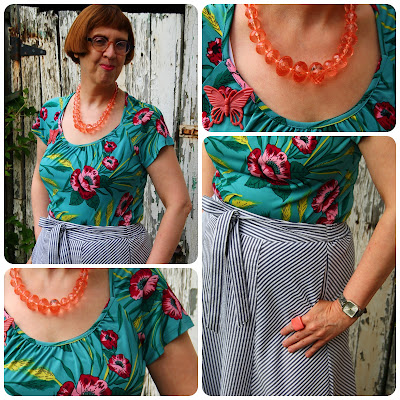 Both my grey and white striped seersucker skirt and turquoise floral King Louie top were recently charity shopped. As was the pink translucent necklace, which I found back in March.
The pink plastic butterfly brooch and ring were both retail buys, which have been in my collection for absolutely ages. On my feet, the ridiculously comfortable ART clogs, which I snapped up at a very bargainous price in a outlet shop last month. 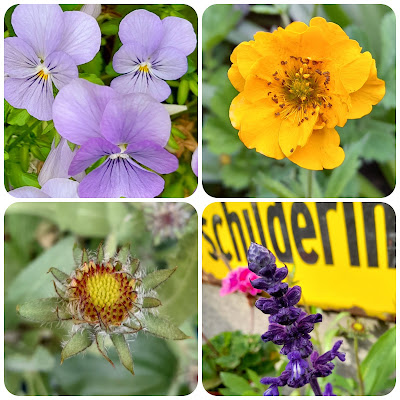 I'm rather strapped for time, so this will be all for this post. But of course, I cannot possibly leave you without a glimpse at some of the treasures in Dove Cottage's tiny plot.
There's the last of the lilac pansies, getting quite leggy now, and the first of the cheerful yellow Geum chiloense "Lady Stratheden", now going into its third season. Deep purple Salvias are thriving as well, while its neighbour, Gaillardia "Kobold", is developing more colour with each day. At the time of writing, the flowers' orange-red petals have emerged, providing a wonderful contrast with the purple of the Salvias. 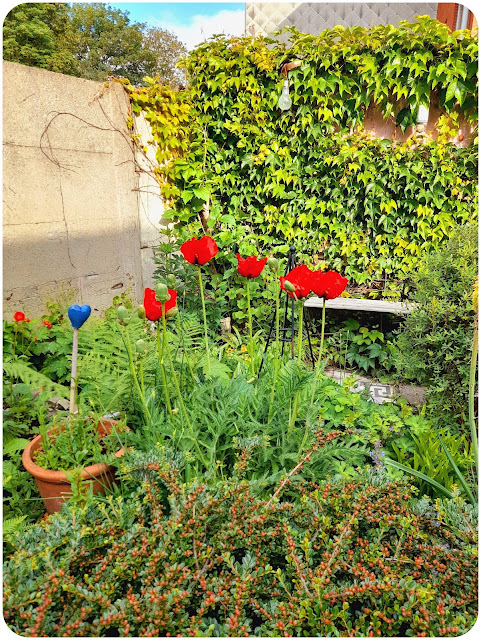 Finally, here's a view towards the bench, its back completely overgrown by Virginia Creeper. It might very well have disappeared completely by the time we get back from holiday!
Here, the Oriental Poppies are still playing as starring role, enjoying their moment before the rains came.
Posted by Polyester Princess at 19:33