Once again, we were greeted by the sun when we woke up on Tuesday the 7th of September.

After our customary fruit and yogurt breakfast - we'd stocked up on fruit at the local supermarket after we'd returned from France on Monday - we repaired to our balcony, enjoying our morning coffee while making plans for the day.

The weather forecast kept insisting that we were in for another scorcher that day, which ruled out doing anything too taxing like uphill walking. Well, we'd already had our fair share of the latter in France the other day and we were definitely feeling the strain. 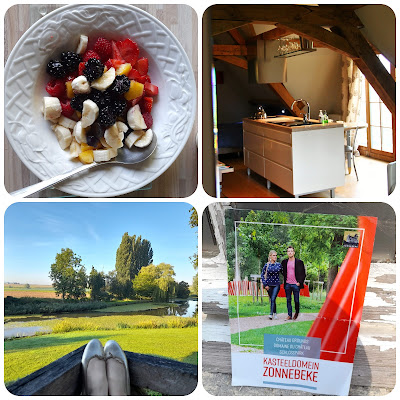 As luck would have it, there was a leaflet among our cottage's holiday brochures which immediately caught our eye. The castle domain in Zonnebeke, established on the site of a former Augustinian abbey (1072-1796), and incorporating the Memorial Museum Passchendaele 1917. A leafy walk and a chunk of World War I history sounded right up our street.

We wasted no time in packing a picnic, but before embarking on our 20-minute or so journey to Zonnebeke, let me show you what I was wearing first. 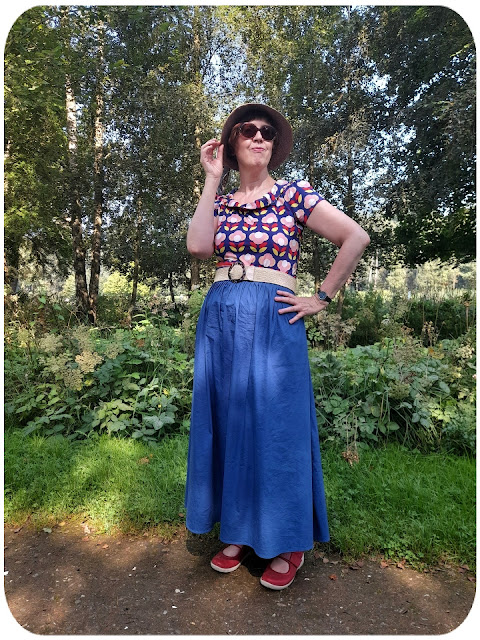 The blue organic cotton skirt I'd picked up in the Mango sales turned out to be such a joy to wear during our little getaway in August, that packing it for our holiday was a no-brainer. The funky floral top I combined it with was a purchase from the high street as well. By retro label Zoë Loveborn, it has been a Summer staple for years. The belt is again one of my favourite stretchy ones. On my feet, another pair of sales bargain Clarks, as I'd exchanged my comfy sandals for my even more comfy Cloudsteppers!
The sun was already climbing towards its zenith by the time we'd parked our car in one of the domain's car parks, a searing orb in a brilliant blue sky. 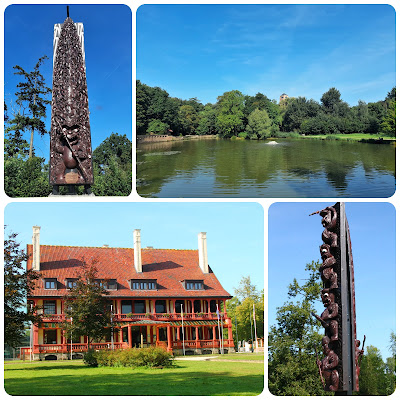 Making our way towards the cover of some trees, we passed the 8-metre-tall memorial honouring the role of New Zealand’s Māori in the First World War. The pou maumahara (memorial carving) was created over four years from 4500-year-old native New Zealand timber by master carvers, tutors and students from the New Zealand Māori Arts and Crafts Institute in Rotorua, New Zealand.

Our leaflet contained a map indicating a 1,9 kilometer walking trail around the estate, and as it seemed to start at the museum and information centre, we walked into its direction. Both are located in a lake-fronted Normandy-style mansion which was built in 1922 to replace a castle bombarded into rubble during the war.

The faintest of alarm bells started going off in our heads when we couldn't find any signs and our fears were confirmed when the nice lady at the information desk informed us that the walk was indeed not signposted. You can't go wrong, she said. You can see the house at all times, she said. But we have a track record of getting lost, we said. I could see her smiling behind her mask. 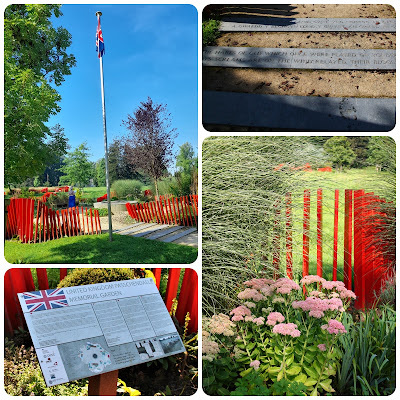 We walked towards the lake as instructed and took the path skirting it, happily breathing in the scent of the late Summer air, a hint of Autumn carried along a whisper of a breeze. Soon we were faced with a choice of woodland paths which we selected at will, without a glance at the map.
Arriving at a clearing, we detected random pools of red picket fences. Some head-scratching followed by a look at the map revealed that these were the Passchendaele Memorial Gardens, a series of eight poppy-shaped remembrance gardens created for the Battle of Passchendaele's centenary in 2017, each one designed by one of the nations that took part in the battle.
The one immediately in front of us turned out to be the United Kingdom's. Sitting down on a conveniently placed garden bench, we looked at the map, which confirmed that we'd already taken a wrong turning. 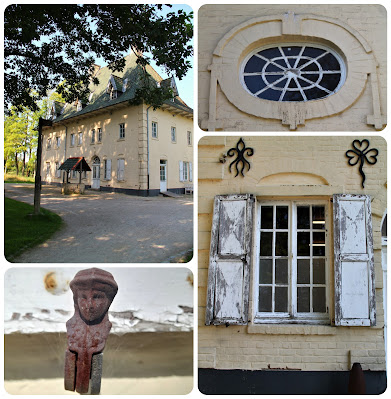 We were supposed to pass in front of Villa Zonnedaele, which we could see shimmering between the trees beyond the gardens, so we made our way towards it with the intention to continue the walk from there. The villa, commissioned by the castle's owner for his eldest daughter in 1933, turned out to be another sad case of neglect. 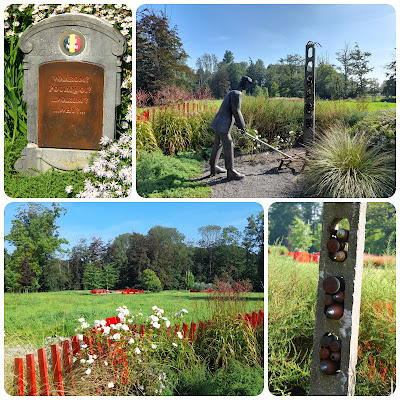 After this false start, we resumed our walk, this time correctly passing all eight gardens, starting with the Belgian one, which you can see above.

The New Zealand garden (below, top left and bottom right) was my favourite, its centre piece a hollow concrete column, the scale of the door requiring visitors to bend low to enter, echoing the physical confinement of the battlefield trenches. 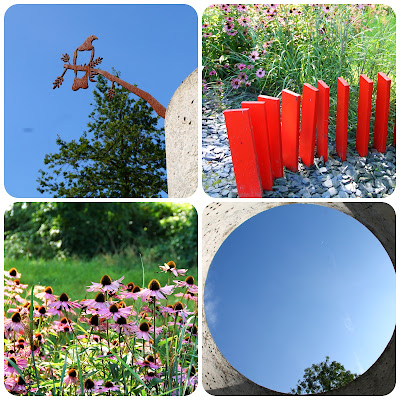 I was also enamoured by the swathes of Echinacea juxtaposed with the red picket fence at the Canadian garden (top right and bottom left).

Two of the gardens were laid out separately from the others, and were somewhat hidden by lush thickets of shrubs and trees, and it was here that we had another wobble. Eventually we arrived back at the chalet, err ... castle, where we searched out a shady bench to have our picnic on. 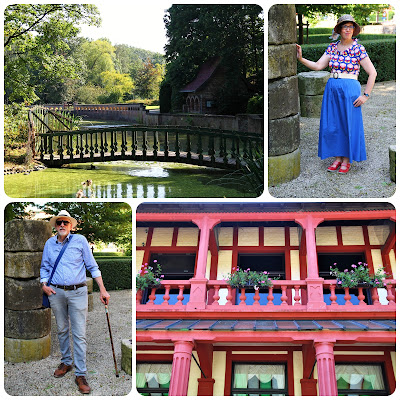 Thus fortified, we were ready for the haunting experience which awaited us at the Memorial Museum Passchendaele 1917.
Aided by audio guides, the museum presents the history of the First World War in a poignant and vivid way, with a particular emphasis on the Battle of Passchendaele. 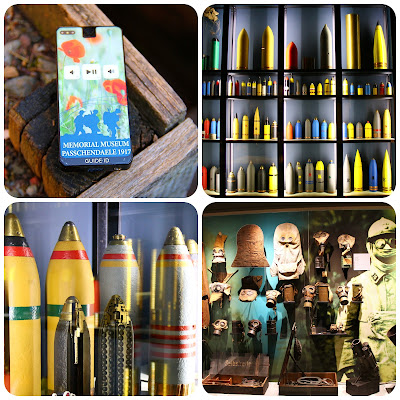 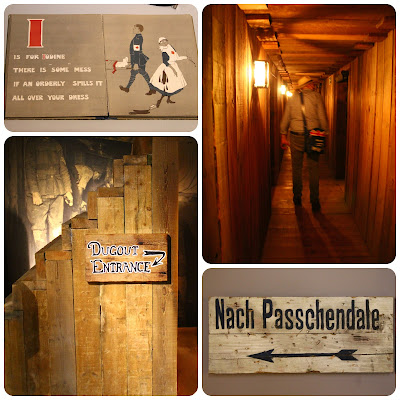 After the museum section, the tour continues with he unique Dugout Experience.  As a visitor, you discover how the British went to live underground in 1917, an oppressive experience that creates a disconcerting picture of the miserable and claustrophobic living conditions at that time. 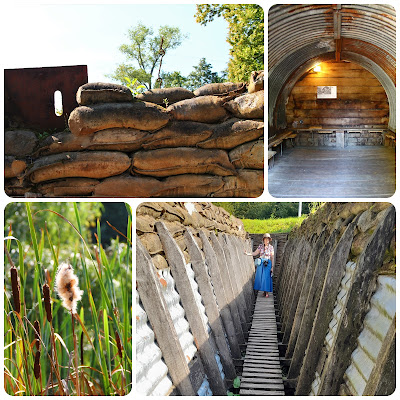 The final part of the museum constitutes a faithful reconstruction of German and British trenches, complete with  original shelters. 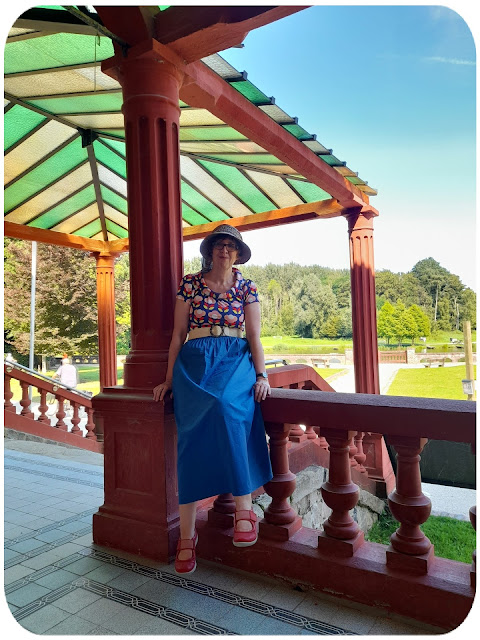 After this almost physical ordeal we felt worn out, which wasn't at all aided by the relentless heat of the sun, as the temperature continued to flirt with the high twenties. We sat down on a bench on the museum's verandah to recover before returning to our sauna-like car and driving home to our mercifully cool cottage. 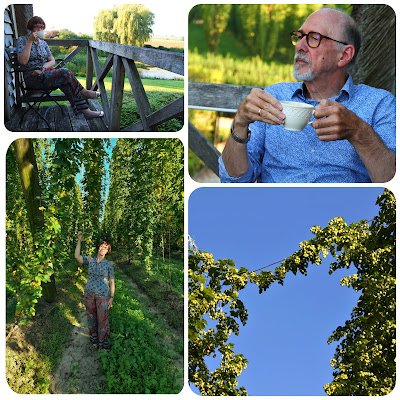 On Wednesday the 8th, the weather thermostat was turned up even higher, the mercury forecasted to reach a scorching 30°C.
Nursing our morning cups of coffee on our balcony and mulling over the day's possibilities, I announced to Jos that I wanted to take some outfit photos in the hopfield across the road. So, before we started the day's adventures, that is exactly what we did. 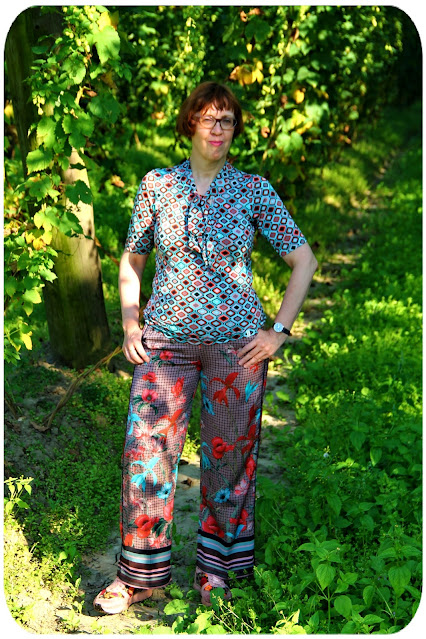 As we'd planned a walk in the woods, I was wearing one of the pairs of lightweight wide-legged trousers I'd thrown into my suitcase. They are Zara by way of a charity shop, and I've worn the pussy-bow top - an ancient retail buy - with it many times before. A tried and tested no-brainer of an outfit. On my feet, barely visible in the photos, my pair of charity shopped pink floral sneakers. 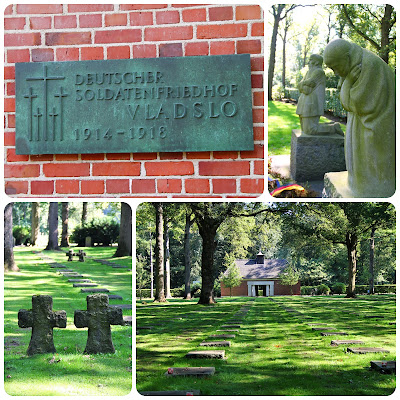 The woods we'd selected for our walk were called Praetbos (bos is the Flemish word for wood), about half an hour's drive from Poperinge. On the outskirts of the small village of Vladslo, near the town of Diksmuide, it's adjacent to Vladslo German Military Cemetery.
Here, 25.638 German soldiers have found their final resting place. With stone tablets bearing multiple names, interspersed with roughly hewn stone crosses, there is a poignant sense of sadness and loss here, yet it feels soothingly peaceful in the dappled shade of the trees. 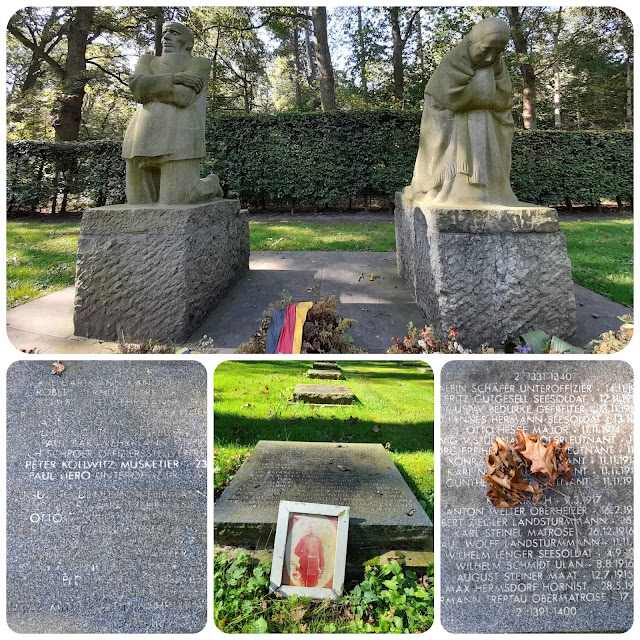 Among the soldiers who rest here is Peter Kollwitz, son of renowned German artist Käthe Kollwitz, who was killed at just 18 years old on October 23, 1914.
For nearly twenty years, Käthe Kollwitz struggled to find a way to memorialize her dead son, discarding draft after draft, and putting the project aside temporarily in 1919. When she returned to the project in 1924, she settled on two simple figures, a mother and father with the features of Käthe and her husband Karl, who would kneel in mourning before the graves. Their son Peter's name is on the tablet just in front of the mourning father. 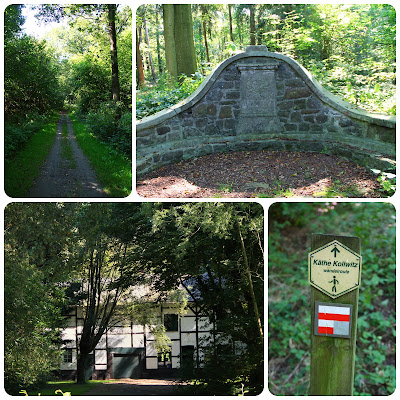 Our walk in the woods turned out to be only a very brief one, as once again, in spite of the leaflet outlining the walk, it was not signposted. 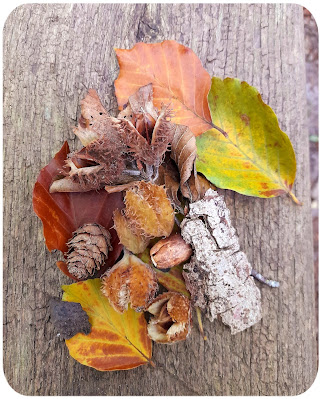 So we just wandered at will and sat down on a bench where I gathered materials for a seasonal display.

The woodland paths were part of a 10,5 kilometer Käthe Kollwitz walk and indeed, her life and artwork ended up being the theme of the day, which continued with a visit to a museum dedicated to the artist in the nearby town of Koekelare. 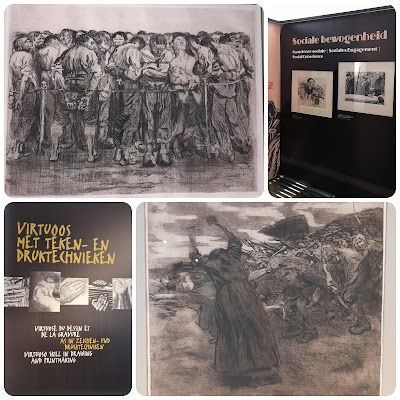 In a unique former brewery setting, the Käthe Kollwitz Museum houses a collection of her original artwork.

Through these, one discovers how Käthe rebelled against war and poverty through her expressionist work. 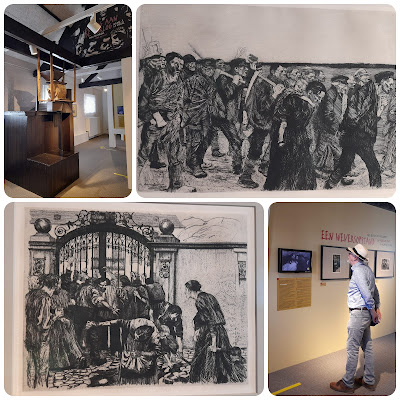 Being directly under the eaves, it was quite warm at the museum, and we were glad to have the space mostly to ourselves, so that we could take off our masks.
We declined a visit to another museum on the same site, which was included in the ticket price, as it was even hotter in there. So, after refreshments on a terrace on the town square, we made our way to the final leg of our day's adventures. 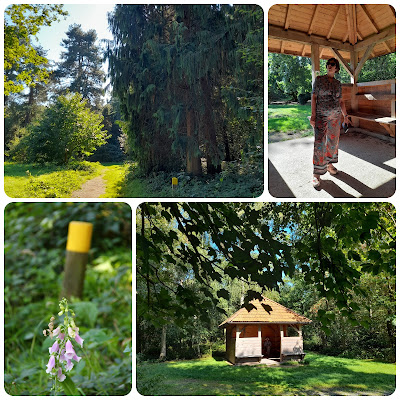 The day ended with a very leisurely walk in Koekelare Arboretum. Here we just had to follow the yellow signs ... Easy peasy!
Needless to say, we still managed to get lost, so when we caught sight of the car park, we decided to call it a day and made a beeline for a our car.
See you next time!
Posted by Polyester Princess at 19:23