Hello my lovelies, how are you doing? I'm doing fine, thank you for asking, although I'm still trying to get my head around the fact that our longed for holiday is well and truly over.  In fact, I am due back at the office tomorrow!

The crazy thing is that it feels as if we were away for much longer than a week, while simultaneously, as if in a parallel world, it seems like it was only yesterday that we packed our bags and drove off in a westerly direction.

Since then, we've been treated to a mini heatwave, and I turned a year older. For those who have been wondering when I mentioned milestone birthday: yes, I did turn 60 last Sunday, which still feels quite unreal and definitely hasn't sunk in yet. After all, apart from feeling relaxed and recharged after our holiday, I'm not feeling any different. 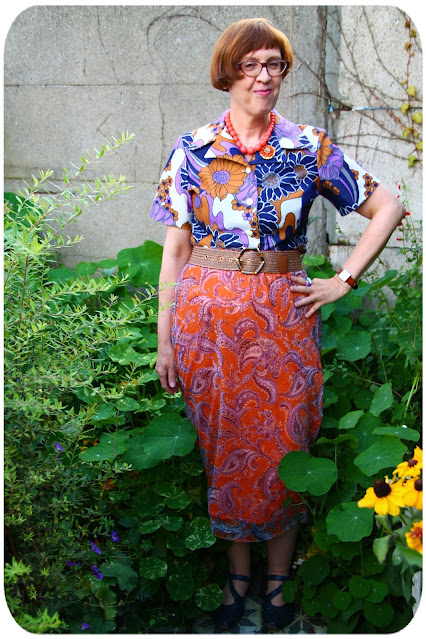 But let's not be hasty: in these photos I was still a 59-year-old, as I hadn't finished blogging about the month of August yet. As uneventful as its final week was, it would be a shame to let the handful of outfits we managed to photograph go to waste.
A short ride in the time machine takes us back to August's final Friday, which my journal tells me was a cloudy day with rainclouds scudding on the horizon and a measly 20°C.
After our customary charity shopping trip - it was my free Friday after all - we only had just enough time for a couple of outfit photos before it started pelting down yet again. 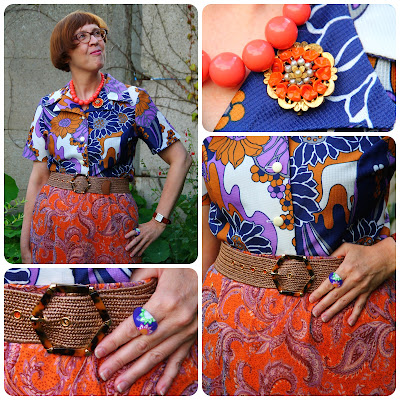 My wildly patterned short-sleeved blouse was a vintage find from Think Twice and has been in my wardrobe forever. It certainly isn't making its debut on the blog! This time, its companion was the high street skirt I charity shopped earlier that month. It's got a gauzy patterned layer over a solid orange one and, apart from navy, it repeats all of the blouse's colours.

Navy is echoed in my shoes and floral perspex ring, while I used orange again for my necklace and brooch. My belt, with its faux tortoiseshell hexagonal buckle, was a rare retail buy back in May. A wise investment, it seems, as I've been wearing it lots. 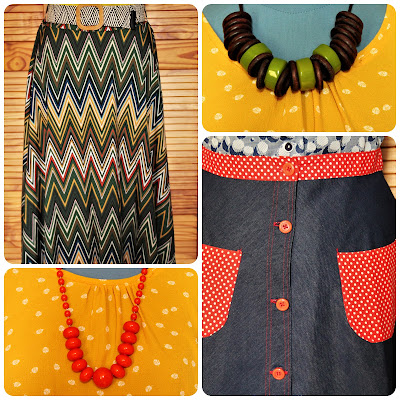 Here's a quick peek at what came home with me from the charity shops that day. However, I'm starting with the vintage denim button through skirt, which is the odd one out, as I found it in a vintage per kilo shop during one of my lunch breaks that week. It fits, although only just, and as it has got zero stretch, I'll have to lay off the munchies for a while in order to comfortably wear it. Being back at the office full-time hasn't been exactly beneficial in that department.

A brief look at the zig-zag patterned skirt, which came on holiday with me and which you'll therefore see me wearing soon! 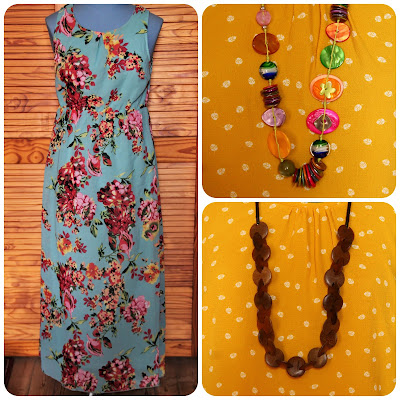 The sky blue dress with its garlands of predominantly pink flowers had me stumped at first. It's got a deep V at the back, which I initially mistook for the front, and almost made me leave it behind as it looked rather weird. It was only when I discovered the label sewn in the V that the penny dropped.

My final finds that day were four necklaces which have joined my burgeoning collection. One can never have enough accessories, surely! 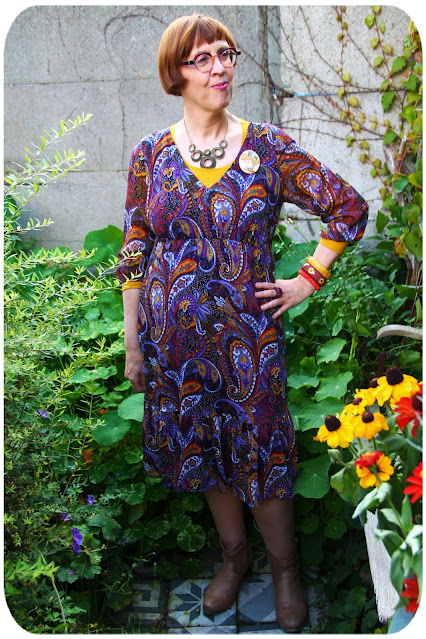 Saturday was another mixed weather day, and although the thermometer only indicated 21°C, it felt quite muggy outside. Inside was quite a different story, though, and I was glad of the long-sleeved yellow t-shirt I layered under my flimsy dress.
The eagle-eyed might recognize it as the purple based Esprit dress with its Paisley-esque pattern I charity shopped the previous week. 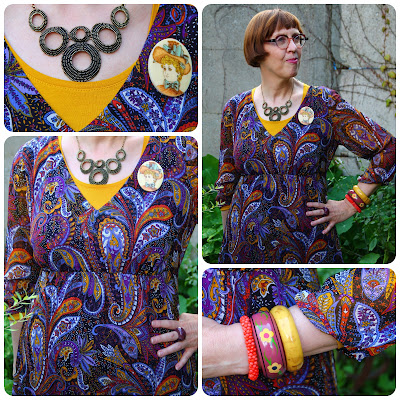 All my accessoires were either charity shop or flea market finds as well, including the necklace, originating from Veritas, a Belgian chain of haberdashery and accessory shops, but found new on card in a charity shop in Antwerp a couple of years ago.

My journal tells me that we ran a couple of errands and were invited by our new neighbours across the street to have a look at their ongoing renovation work. The rest of the day was spent doing some leisurely pottering, including throwing together a couple of things I thought we might need on our holiday. 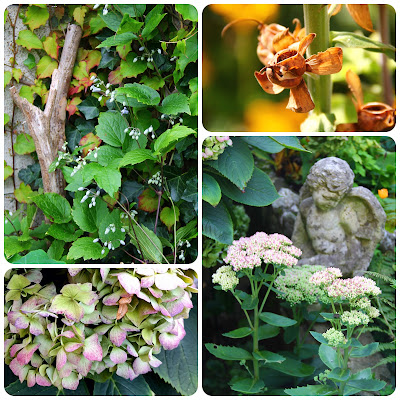 Perhaps a little earlier than other years, our garden's mood is clearly Autumnal, although our herbaceous Clematis, officially known as Clematis jouiniana 'Mrs Robert Brydon', seems to be right on schedule.

I cannot wait for its profusion of tiny buds (top left) to fully open into clusters of lavender blue flowers.

The only outfit I've got to show you in my final, pre-holiday, week is this one. Built around the folksy vintage skirt - a firm favourite - charity shopped last Summer, I picked up the fuchsia colour of the flowers by adding a fuchsia three-quarter sleeved top. I added oodles of blue with my belt, necklace, brooch and cardigan, while a hint of fuchsia reappears in my ring.

Can you believe the proportion of those Nasturtiums though .... 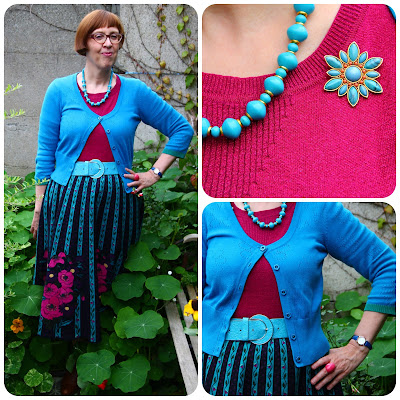 The week before any holiday is always a stressful one for me at the office, as I need to prepare everything for my part-time colleague to take over my job when I'm away.

This time, the stress levels were exacerbated by a crisis at work, while on the evening of my penultimate working day, a crisis of a different kind at our next door neighbours left us reeling.

While I cannot go into detail on either issue, needless to say it was quite a relief when Saturday arrived, with packing for our holiday the only item on our to-do list. 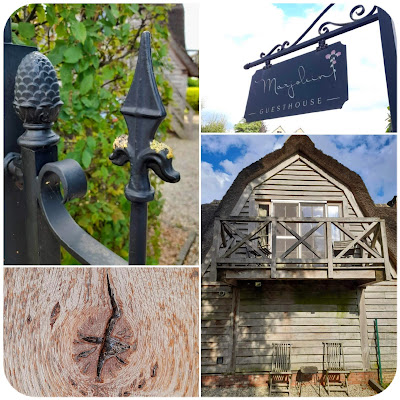 We were due at our holiday cottage on the outskirts of Poperinge by mid-afternoon on Sunday, and as it's only a one and a half hour drive from Dove Cottage, this left us plenty of time for both breakfast and lunch, not to mention giving lots of cuddles to a non-suspecting Bess.

The forecast was for a sunny day, with temperatures nudging the mid-twenties, and indeed as the afternoon progressed the scattering of cotton wool clouds dispersed, revealing a sky of the brightest and deepest blue.

Our holiday cottage, a compact studio above the owner's car port in a thatched oak framed building, will probably need no introduction. This is, after all, our tenth stay here, and the sixth time it appears on my blog. For any new-time readers though, I'll try to incorporate some details in my upcoming travel posts. After making ourselves at home and having a restorative cup of coffee, it was approaching 4 pm when we once again stepped into our car for the 10-minute drive to Poperinge itself. We know our way around a bit by now, and easily found a free parking spot a mere 5-minute walk from the town centre.

As you can see, things were definitely heating up: the thermometer outside a chemist's shop was indicating a mind-blowing 28°C and there wasn't a cloud to be spied in the sky. 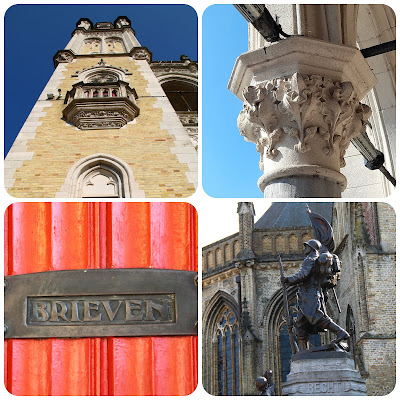 At first glance, Poperinge might be just a sleepy provincial town near the French border in Belgium's rural west. Don't be deceived, though, as it has got several claims to fame.

The area around Poperinge is known as the hop capital of Flanders so perhaps it isn't surprising that it has its very own Hop Museum, which we visited in 2017. 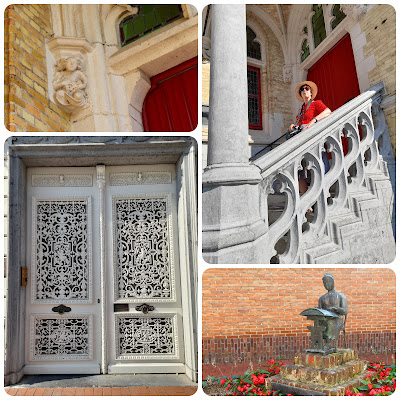 Arriving at the town's market place, Poperinge's imposing town hall, built in 1911 in neo-Gothic style, is a sight to behold.  The building has a slender belfry tower crowned by a dragon and a facade with two superimposed loggias.
And then there's its Great War history, in which Talbot House, opened in 1915 by British army chaplain Philip Clayton as a soldiers' club, is playing a major part. We revisited it later that week, so I'll show you around in a later post. 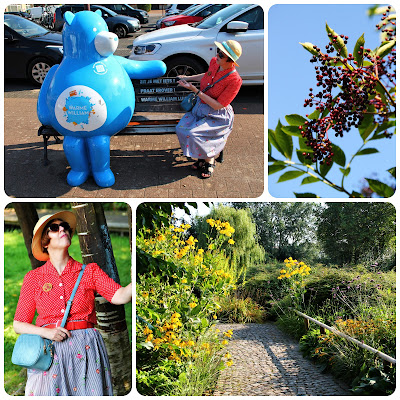 We always seem to end up in Poperinge's Dirk Frimout park, named after one of the town's most famous sons who, in 1992, was the first Belgian in space.
On the way up, we met a pot-bellied blue bear on a bench. This is Warme William, who is the mascot of a campaign to encourage young people to talk about their feelings and to listen to those who are having a hard time. I might not be the right age, but I still had a thing or two to discuss with him ... 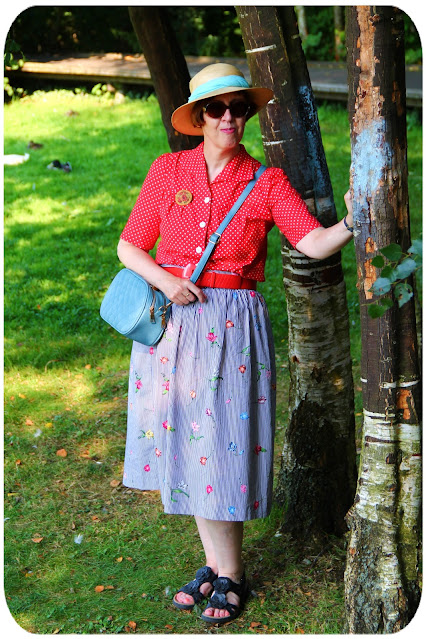 The park offered the perfect opportunity to show you my outfit, which consisted of a flower strewn cotton H&M skirt charity shopped last Summer and a red and white polka dot cotton blouse from Think Twice. Apart from my red belt, my only other accessory was a wicker vintage brooch embroidered with poppies. The perfect accessory for a visit to Flanders Field country! 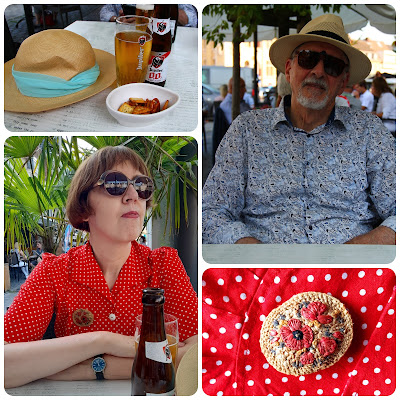 The market place's terraces were inundated with people making the most of the first (and perhaps the last) gorgeously sunny Sunday in a long time. It was nothing short of a miracle that we were able to snap up a table for two and have a refreshing non-alcoholic beer before returning to our cottage. 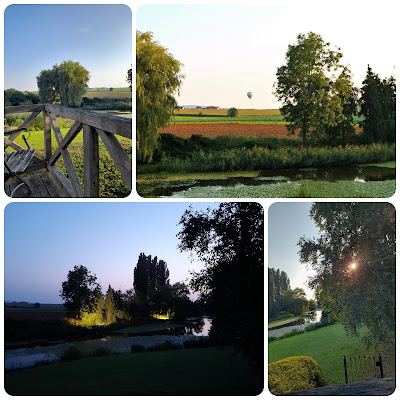 After our evening meal - we'd brought the ingredients for a salad - we sat on our little balcony watching the sun go down over the lake. Just like I imagined doing in my penultimate post!