Time marches on relentlessly. Summer has made way for Autumn and in just a matter of days the calendar's page will be turned to October.

Apart from those which appeared in the episodes of my travelogue, I haven't shared any September outfits with you yet, nor did I tell you about the exciting life (NOT!) I've been leading since we came back from our holidays. Nevertheless, all this will have to wait another couple of days, while I regale you with another post of holiday adventures.

Although the previous episode ended on the afternoon of Wednesday the 8th of September, the day's excitements weren't finished just yet. As we happened to glance through our cottage's front door window, we saw that hop picking had commenced in the field across the road. The one I'd posed in only that morning!

As usual, as the evening progressed, the resident sheep were joined by a fluffle of bunnies. Yes, that really is the collective noun for them! 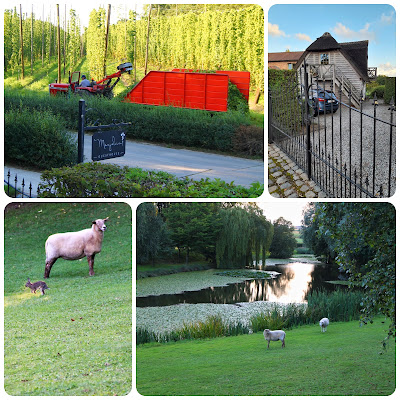 Now let's move swiftly to Thursday! If the weathermen were for once to be believed, it would be a slightly cooler day, the temperature struggling to reach the mid-twenties, and with a strong possibility of rain towards the end of the afternoon.
Hoping the forecasted change of weather would have prevented the worst of the crowds of flocking to the seaside, that was our destination for the day sorted! So, off we went to De Panne, the nearest Belgian seaside resort to Poperinge, just under 35 kilometers away. 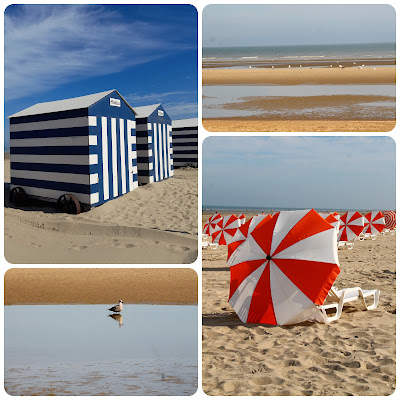 Having found ourselves a spot on a free car park just outside the town centre, we proceeded towards the promenade, where we soon spotted the colourful candy-striped cabins and parasols typical for this resort.
It was busier than we'd expected but probably not much more so than on previous September visits. Not being very good with crowds to put it mildly, Covid-19 certainly seems to have exacerbated my dislike of them. What crowds, I can hear you thinking, there hardly seems to be anyone about! Well, I just happen to be an expert in framing my photographs just so that it seems as if we had the place practically to ourselves! The odd gull notwithstanding, obviously ... 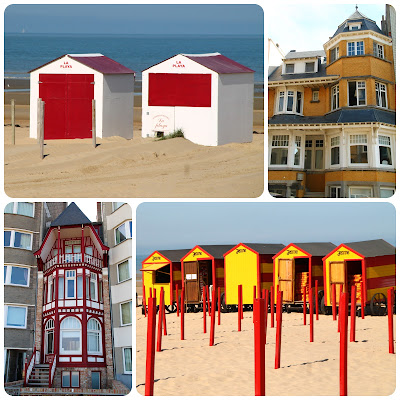 Like most of the Belgian coastline, De Panne's skyline is marred by ugly apartment buildings to cater for the tourists and second-homers. Pranged between these, and holding on for dear life, are some delightful villas from a bygone age. 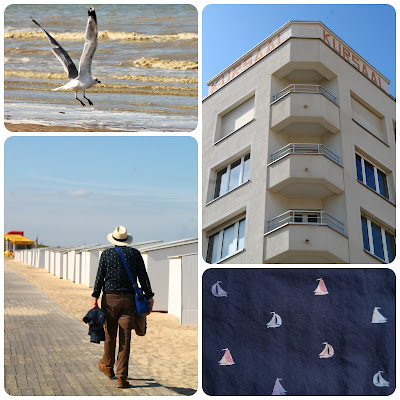 After a stroll along the promenade, we were ready for a spot of lunch at De Kursaal, a long-time favourite whenever we come to De Panne. Originally one of the oldest hotels on the promenade, built in the 1870s, Grand Hotel du Kursaal was completely rebuilt after its destruction in the second war, the floors above the restaurant converted into yet more apartments.
As a nod to our seaside rendez-vous, Jos was wearing a sailing boat patterned shirt ... 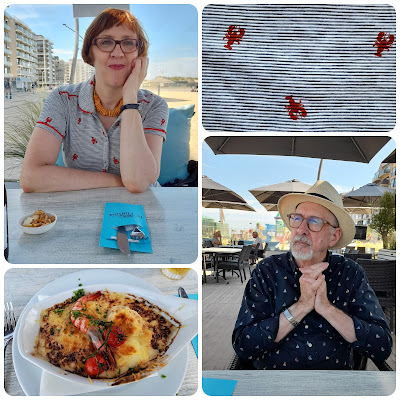 ... while I honoured the occasion by wearing a lobster patterned top!
In spite of the sea breeze, it soon got too warm for the jackets we were originally wearing, especially when seated behind the glass screens enclosing De Kursaal's beach terrace. I had a most delicious fish gratin, which was served in a boat shaped dish! 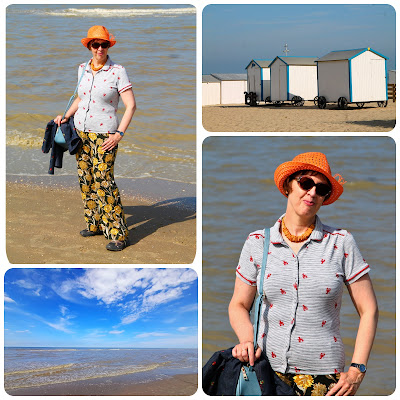 Our plan for the afternoon was a walk along the beach into the direction of France - De Panne is the final Belgian resort before the French border - as it is much quieter there, away from the hustle and bustle of the promenade.
Our first mission, though, was to go and buy a hat, as once again I'd left mine behind in the car. Available in a range of colours, I went for this jaunty orange one! 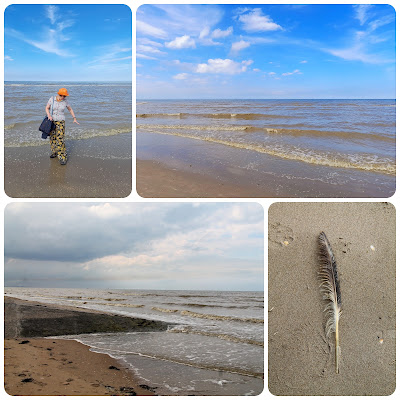 The tide was coming in, and after a game of tag with the rolling waves, we soon had to desert what was left of the beach and make for the safety of the sea dyke.
Meanwhile, ominous looking clouds with a definite promise of rain were advancing from France so, quickening our steps, we hurried back to our car, driving off just as the first raindrops were spotting our windscreen. 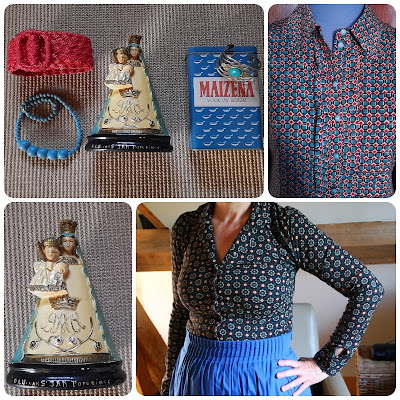 The rain had turned into a veritable deluge by the time we reached Poperinge, where we waited until the worst had passed while parked opposite the town's charity shop.
In spite of its small size, we always seem to strike lucky here. This time, half an hour's rummage yielded two blouses - the one I'm wearing a King Louie - a red raffia belt, a blue wooden beaded necklace and a copper and turquoise cuff. There was also a retro tin for our kitchenalia collection and a delightfully kitschy plaster statue of Our Lady of St. Jan, local to Poperinge. 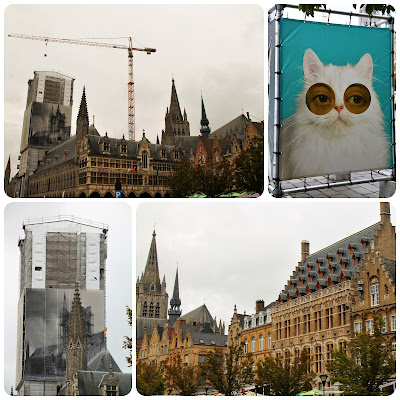 The weather forecast on Friday was quite uncertain and after a bit of dithering we decided that our best bet would be a day trip to Ypres. Not having visited this poignantly beautiful town for a couple of years, we were looking forward to reacquainting ourselves with its delights and perhaps indulge in a spot of shopping.
Sadly, our decision turned out to be a big mistake!
Having parked at the railway station, we walked towards the town centre when, just before reaching the Market Place, we were halted in our tracks by a huge hole in the road where extensive sewer works were taking place. But that wasn't all. There were road and construction works everywhere we turned, the Cloth Hall's magnificent belfry was covered in scaffolding and the Market Place itself was cordoned off due to a car show! 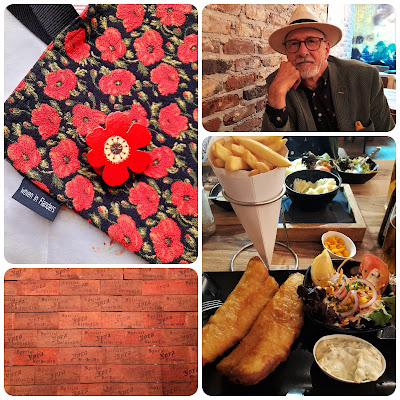 We comforted ourselves with a spot of retail therapy, buying a poppy tapestry bag and wooden poppy brooch at the In Flanders Fields Museum shop. Then we had lunch at one of the restaurants lining the Market Square. Catering for the many British tourists who used to visit here pre-Covid, fish and chips was on the menu, so this is what I went for. And quite delicious it was too! 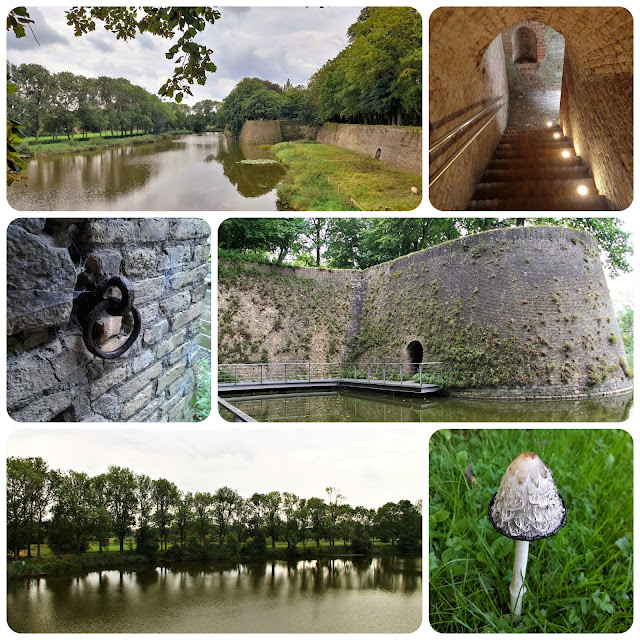 The morning's disappointments were somewhat redeemed by walking back to the railway station the long way, taking the designated footpath along the town's ramparts and moat.
It was a lot busier than usual here too. As luck would have it, a three-day music festival taking place on the outskirts of Ypres was about to go off to a start that day, and we met several groups of youths making their way into town from the railway station.
The same festival made us drive around in circles on our way home, as quite a few roads were closed off. To add insult to injury, the town's charity shop where we briefly stopped for a rummage turned out to be rather disappointing as well. 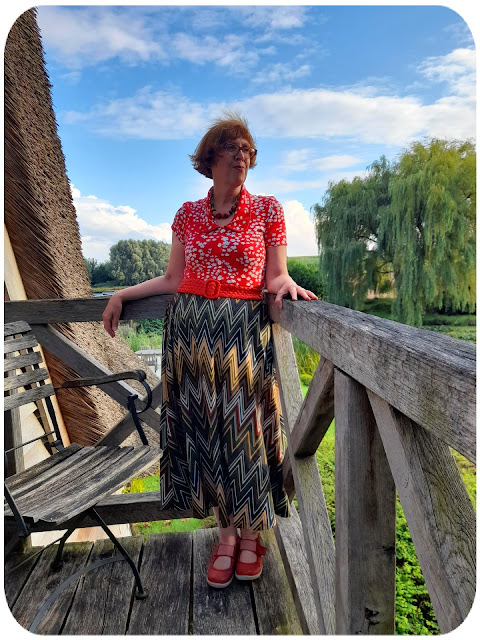 By the time we finally made it back to Marjolein the sun had decided to put in an appearance after all, offering the perfect opportunity for outfit photos on the balcony.
The new-to-me zig-zag skirt I wore earlier that week was now accompanied by a red and white floral top by Belgian retro label Wow To Go, which I think I once bought in the sales, and the red raffia belt I found in the charity shop in Poperinge. 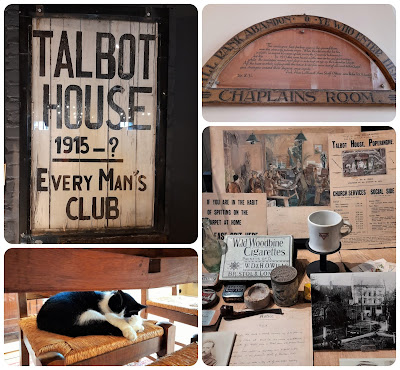 A slate grey sky and a steady drizzle greeted us on Saturday morning. As there was no let-up in sight by mid-morning, we abandoned our plans of going for a local walk and, after checking their website to see whether we needed to book ahead, we set off for a visit Talbot House in Poperinge instead.
Talbot House was founded in 1915. During World War I, Poperinge was used as a garrison town for the British soldiers, with thousands of soldiers passing through the town each day when going to and returning from the front; 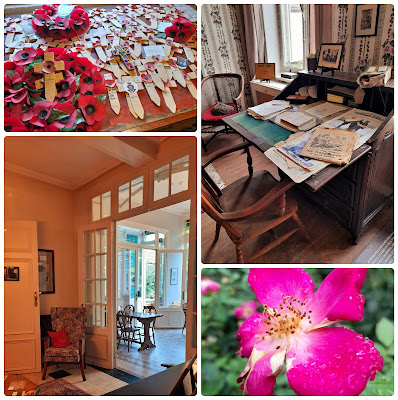 Thus, Talbot House was opened as a club house for all soldiers, regardless of rank, by chaplain Philip "Tubby" Clayton. For many, this place became their home away from home. "An oasis of serenity in a world gone mad", is probably the best way to describe it.
This being our 10th stay in the area, it obviously wasn't out first visit to the house and its garden, but it definitely was as hauntingly moving as ever. 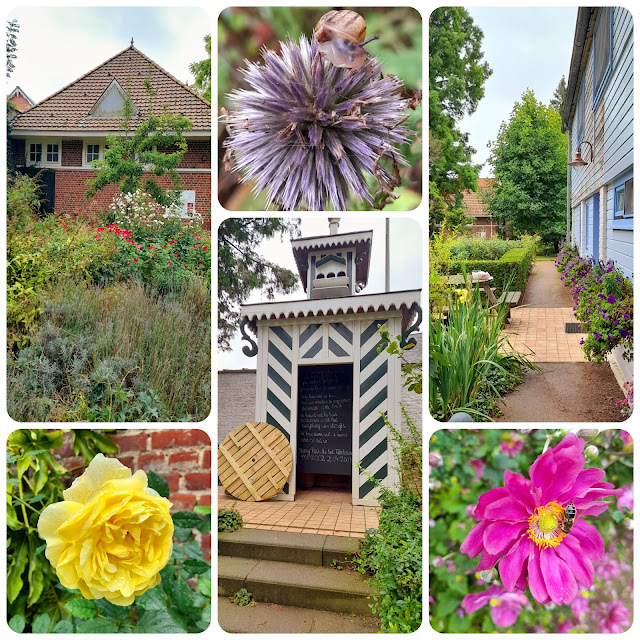 For the afternoon, we'd booked a tour at a hop farm in the neighbouring village of Proven, where we were initiated into the secrets of hop growing. 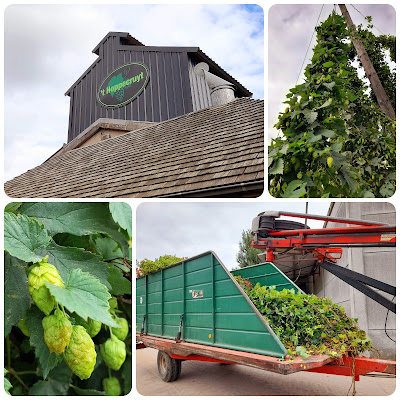 ’t Hoppecruyt is a modern hop farm growing 11,5 hectares of environmentally friendly hops.
The harvest is dried and pelletized on the premises, and as we were visiting during hop picking season, we were able to see part of that process up close. 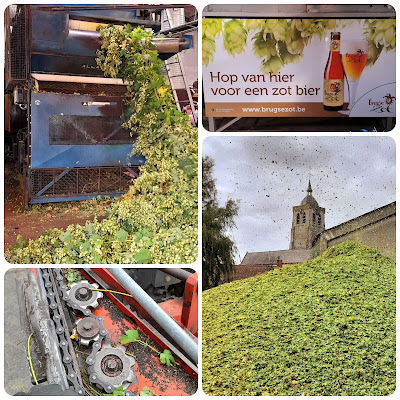 Jos was delighted to learn that his favourite beer, the alcohol-free version of Brugse Zot, is made with hops grown at this particular farm!
At the end of the visit we were offered a free beer from the range produced with the local hops, while farmer's wife and tour guide Benedikte regaled us with an old hop picking song accompanied on accordion. 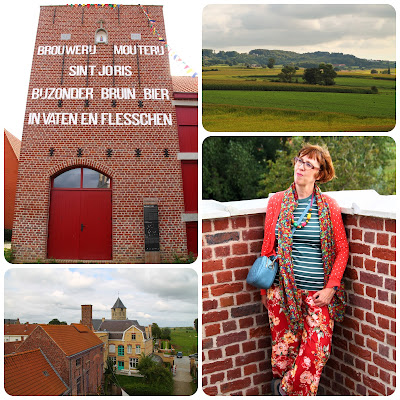 In continuation with the beer theme, our final port of call for the day was Malt Tower St. Joris in Reningelst, another one of Poperinge's satellite villages.
Built in 1913, the brewery malt house now offers exhibition space, as well as a magnificent panorama of the village and the West Flemish hills from its viewing platform.
As a nod to the weather, I was wearing my floral trousers from New Look again, this time combined with a sage green Breton top and a coral polka dot cardigan. 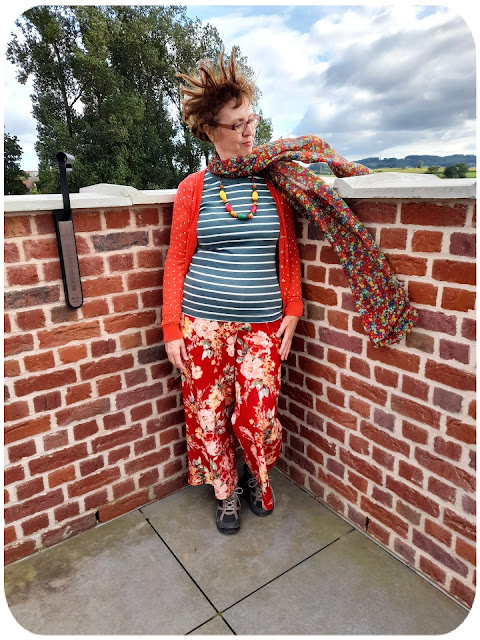 Quite windy it was, as you can see ...
I hope you'll join me again on our final day, followed by some of the promised September outfits, in my next post!
Posted by Polyester Princess at 19:10