Far from the madding crowd

Hello, and welcome to the third episode of my latest travelogue!

We have now arrived on the Wednesday of our week away, which the calendar told us was 2 September. With schools having restarted the previous day, the worst of the tourist season was well and truly over, but we still opted to spend our time as far away from any lingering crowds as possible.

The weather gods kept treating us kindly, so that we could continue to indulge in one of our favourite pastimes and go for socially distanced rambles in the beautiful countryside surrounding us.

What's more, the weather forecast insisted that this would be the best day of the week, with balmy temperatures well into the twenties. 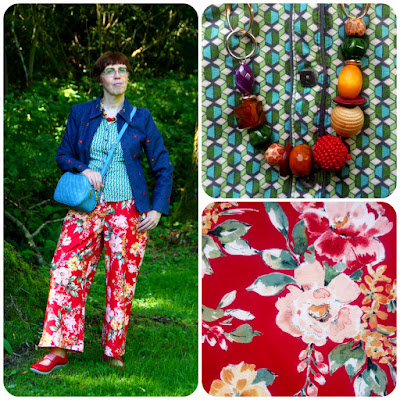 That morning, I pulled another pair of wide-legged trousers out of my suitcase, in a cheerful cherry red strewn with blowsy flowers in pink, peach and green. Same as my other pair, it is from New Look, this one bought brand new in the sales a couple of years ago.
They were actually not the only retail item in my outfit, as my Clarks Cloudsteppers, my blue crossbody bag and my necklace were all bought on the high street. My King Louie top was charity shopped, though, while the flower embroidered denim jacket came from Think Twice. 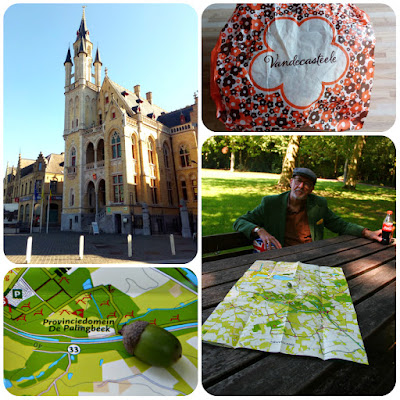 We'd picked a walk starting from De Palingbeek, a provincial estate of about 250 hectares on the outskirts of Ypres. We'd done the same walk six years ago, but when I was googling the exact address of the estate's car park, I saw that the walking map of the area had recently been updated. So, before we set off that morning we went into Poperinge, our nearest little town, to get a new map from the tourist office located in the town's stunning neo-Gothic town hall (top left).
Since we were there, we went to a local bakery and bought a loaf of bread which came packed in a very Polyester Princess-worthy paper bag!
Armed with our map and the picnic Jos had prepared that morning, we entered the car park's address into our car's Satnav and were on our way. Easy-peasy! Or so we thought. But no: the bloody thing took us to a golf course on a single track road and announced that we were there. Of course, there was no car park in sight, so there we sat, hemmed in by the golf course which stretched out on both sides of the road. In desperation we drove around the area's myriad of country lanes until, propelled along by a stroke of luck and a good look at the map, we ultimately made it to the car park. 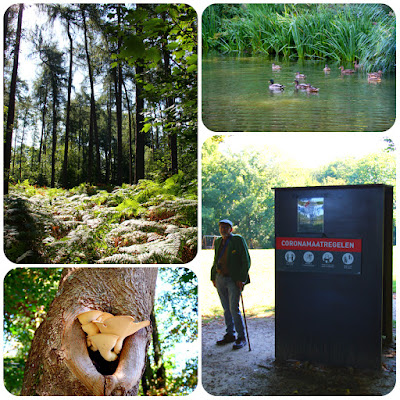 By then, it was past midday, so after having parked our car - which was further thwarted by on-site construction work - we made our way to a picnic site for a bite to eat.
Then, after making use of the on-site hand sanitizing station at the edge of a playground, we were finally ready to start our walk. 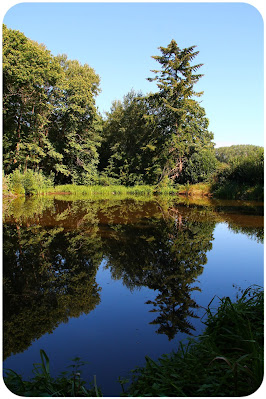 The estate offers a varied landscape of sloping woodland, orchards and meadows, marches and pools.
The latter are often not quite the peaceful pools they appear to be at first sight, owing their existence to mines which were detonated underneath the German positions at nearby Hill 60 in June 1917. 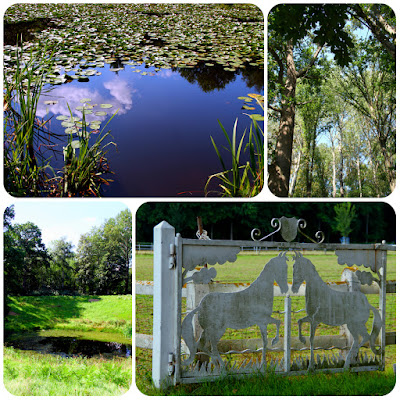 Our walk eventually took us to the most famous of these pools, known as Caterpillar Crater, but once again this had seriously suffered from the ongoing drought, which left the 79,2 meter wide and 15,5 meter deep crater (bottom left) only partly filled. 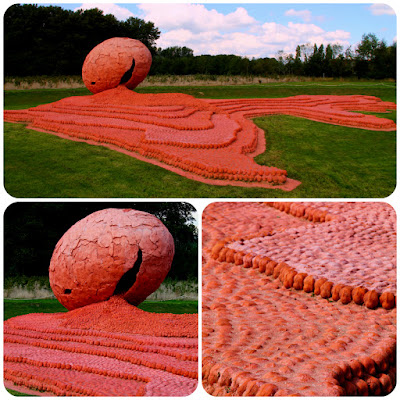 The return journey passed the impressive art installation Coming World Remember Me by artist Koen Vanmechelen. Originally consisting of 600.000 clay heads sculptured by thousands of people from across the globe, representing the 600.000 victims who lost their lives as a result of WWI in Belgium, it was displayed in the estate between March and November 2018.
Many people went home with one of the hand-sculpted heads, but the central sculpture (the egg) as well as 200.000 heads have now received a permanent resting place here. 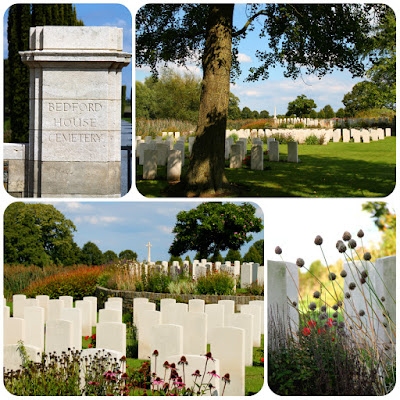 With our walk finished sooner than we'd expected, we thought we'd check out one of the many military cemeteries which are such a feature of the area.  While we were lost on those country lanes that morning, our attention had been caught by the sight of the ubiquitous rows of white headstones nestling in the gently rolling countryside, punctuated by two gazebo-like structures and shimmering like an oasis in the glaring midday sun. Intrigued, we tried to find out its name and exact location, which we soon did. It turned out driving there was only a matter of minutes. 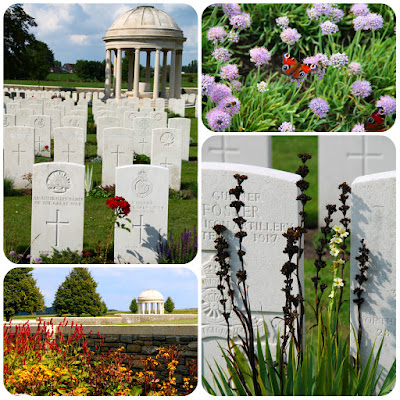 Bedford House Cemetery is one of the largest British cemeteries in the area. It stands in what was once the park of Rosendael Castle, which the British troops renamed "Bedford House" during the war, when it served as a headquarters and a medical aid post. It never fell into enemy hands, but the house was gradually destroyed by shell fire.
The magnificent garden architecture, and the fact that the castle's moat and the remains of its ice house are incorporated into the design, makes Bedford House Cemetery a unique and poignantly beautiful site. 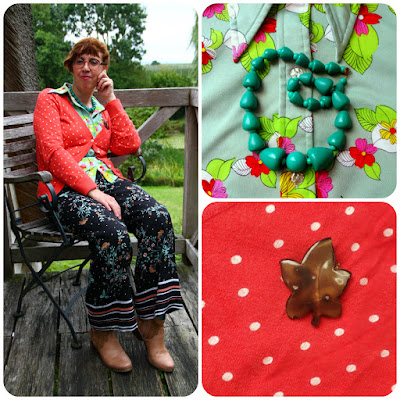 The next day, Thursday, was a total contrast on the weather front, with a dull grey sky and significantly cooler temperatures greeting us when we stepped out onto our balcony.
I was wearing my other pair of wide-legged trousers again, this time combined with a pale green floral vintage skirt, topped by a charity shopped coral polka dot cardigan and accessorized with a vintage necklace and leaf brooch.
No rain seemed to be on the horizon, so we picked another walk for the day, for which I exchanged my ankle boots for my boring yet comfortable walking shoes. 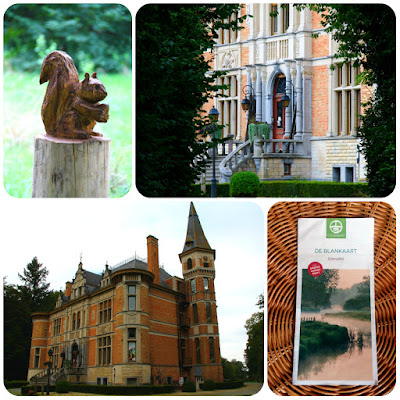 For the start of our walk, we drove down to a different provincial estate, called De Blankaart, which lies just outside the town of Diksmuide, and is about half an hour's drive from our cottage.
Its visitors centre is housed in a picturesque castle, originally built in 1860-1870, although the current construction dates from the 1920s as the destruction of the First World War had only spared its façade.
Located on the edge of the River IJzer's flood plains, the castle is surrounded by a magnificent park. The castle has a permanent exhibition on the area's fauna and flora, but its doors were firmly closed. Free walking leaflets, however, were readily available, as was a hand sanitizing unit cleverly built into a tree. 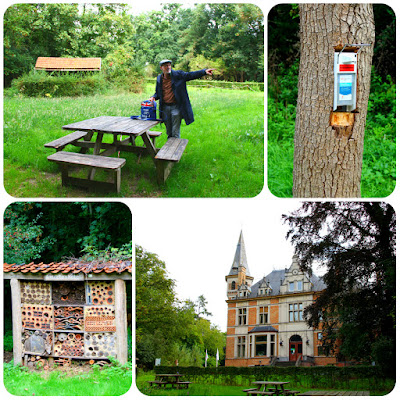 The picnic area was deserted so, while eating our sandwiches at one of the tables, we proceeded to study the map supplied with the leaflet, opting for the 5,6 kilometer walk instead of the longer 10 kilometer one. The shorter walk would follow the longer one's path for a stretch, and would then require a right turn instead of a left at some point. Easy-peasy, no? 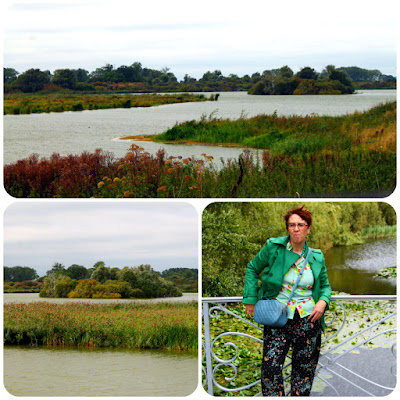 Confidently, we started our walk, following the hexagonal sign posts which initially lead us through some woodland. It didn't take long until we came to the first of many bird hides offering a view of the area's watery grass and reedlands, with the vast IJzer wetlands behind them.
The weather had turned quite windy by now, so that by the time we made it to a decorative iron bridge offering the most enchanting of views of the castle across a waterlily pad filled lake, we were almost blown away in both senses of the word. 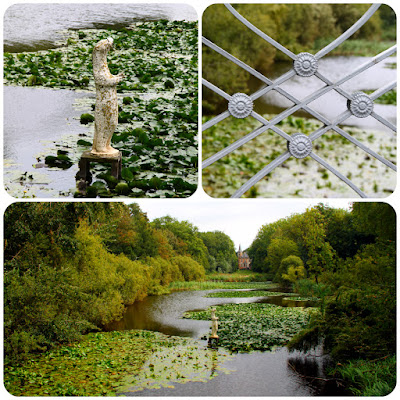 It was here that we met a couple walking their dog, whom we would later meet again at a turning, looking at the rather rudimentary map and scratching their heads. They told us they were still debating whether to do the shorter or the longer walk, and that a right turn indicating diagonally across the meadows would take us to the shorter circuit. With our impressive track record of getting lost, we took no chances, agreed that this was the anticipated right turn, and went ahead, soon followed by the dog-walking couple.
Much to or surprise, though, we found ourselves back at the castle within minutes. Surely we couldn't have walked 5,6 kilometers already, only about a kilometer at a rough guess. The dog-walking couple didn't seem to think anything was wrong, and were last seen cycling off with their dog in one of those carts, but after studying the map once again, we decided to recross the meadow and continue left instead of right at the turning. 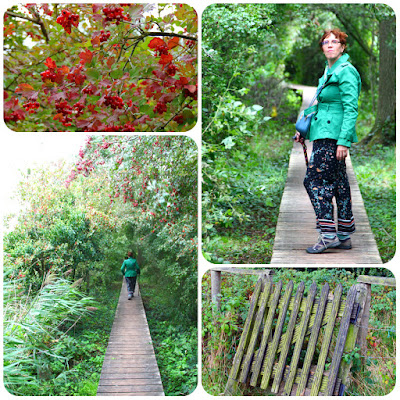 From here, the walk was getting more and more adventurous, leading us through meadows and along stretches of boardwalk, one of them quite higgledy piggledy, with some of the wooden slats broken or missing. Fortunately, the whole thing was supported by sturdy iron grilles! At one point, a gnarled old tree was doing its best to catch careless walkers unawares and reward them with a bump on the head.

Not us, I hasten to add, but on our way back we did meet a lady who was clutching her head after a painful collision with the tree in question. 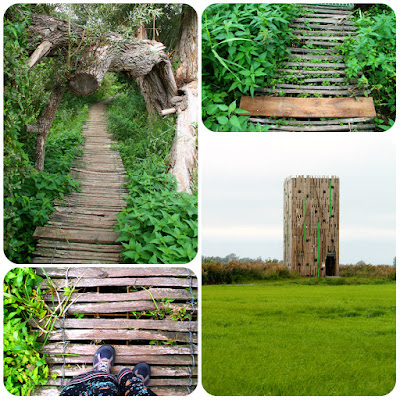 At this point, we still weren't sure we were on the right track and hadn't inadvertently missed the elusive right turning. Stubbornly, we plodded on, alternately propelled along and hampered by the wind which by then had greatly increased in force. When we spotted the tower (bottom right), which apparently was another bird hide, in the distance, we decided to make this our goal and then see if we could climb it and make out our exact location. 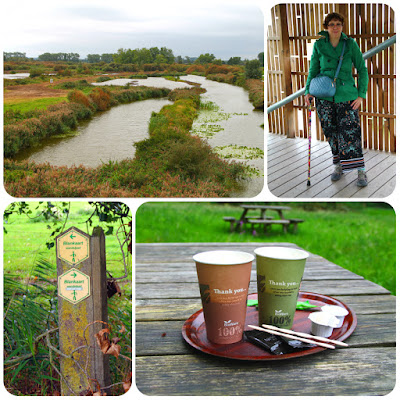 The wind blowing through the open structure was making our ears sting and our eyes water, but climbing to its top floor, which thankfully was not in the open, rewarded us with the most stunning of views over the wetlands. Studying the map once more, we determined we were still on the right track and proceeded until, hey presto, we came to the very spot where the two paths diverged.
Here, the shorter circuit initially took us along a narrow tarmacked lane until we reached a path leading to another meadow, which we had to cross to arrive back at the wonky boardwalk.
We were quite proud of ourselves for having persevered and finished the walk without actually getting lost a second time. As the visitors centre had opened by now, we even treated ourselves to a celebratory takeaway coffee.
"We shall not cease from exploration
And the end of all our exploring
Will be to arrive at where we started
And know the place for the first time."
-   T. S. Eliot,  Little Gidding 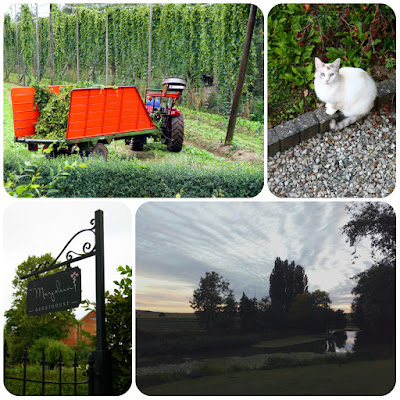 Then it was back to the cottage, where much to our delight, hop picking had started in the fields opposite.
We watched proceedings for a while, while in our turn being watched by the owner's cat, Chablis, who was making the most of the last rays of the sun, which had suddenly appeared out of nowhere.
Another day gone by, and how we wished we could have stopped time, but alas, two more days and it would be all over.
Please do join me again for the final episode of my travelogue in a couple of days. Until then, do stay safe, my friends!