Out of the woods

Thank you for joining me for the final episode of my travelogue!

As our adventures are now several weeks behind us I had to have a sneaky peak in my journal for some of the details, and I'm particularly glad of all the photographs I've taken, each and every one having its own story to tell.

Take this one for instance, snapped near the end of Friday's walk. There's nothing special about what I'm wearing, as you've seen it all before. The glorious floral wide-legged trousers, which I'd only worn two days before, combined with the same flower-embroidered vintage denim jacket. The only difference a short-sleeved green sailor-style jumper, originally from Belgian label Who's That Girl. Charity shopped back in 2016, it has been worn quite a lot over the years, and what's more, it has accompanied me to our west country retreat many times before.

The story this picture tells, however, is written in my tousled hair and smile, one of those smiles which effortlessly reaches the eyes. Taken near the end of yet another gorgeous walk on an equally gorgeous day, it speaks of happiness and contentment in the face of adversity, the blush on my cheeks not just due to that morning's application of make-up, but kissed by fresh air and the rays of the late Summer sun. 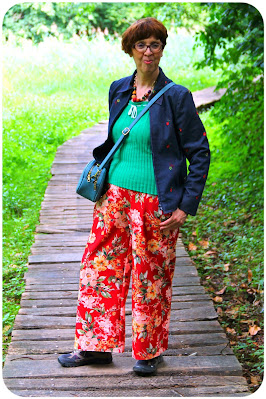 But I'm getting ahead of myself, so let's rewind to Friday morning. The weathermen kept trying to spoil our prevailing good moods by forecasting rain for the end of the week, and indeed we'd initially woken up to a bit of a dull grey day.  However, by the time we were ready to go, the sun had come out of hiding and fluffy white clouds were drifting across a blue sky. 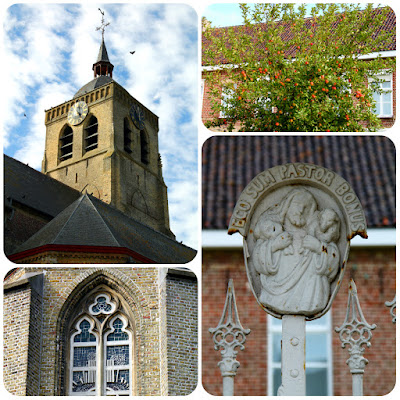 Our first mission of the day was stocking up on provisions in a small supermarket in the neighbouring village of Proven. We were surprised to see that apparently our Satnav knew the location of the shop, so we sat back and, against our better judgment, let her lead the way. Easy-peasy!
Well, what can I say? Having instructed us to make a right turn instead of a left, we were once again left to our own devices, the upside being that we were able to walk past and admire the village's pretty church and vicarage. 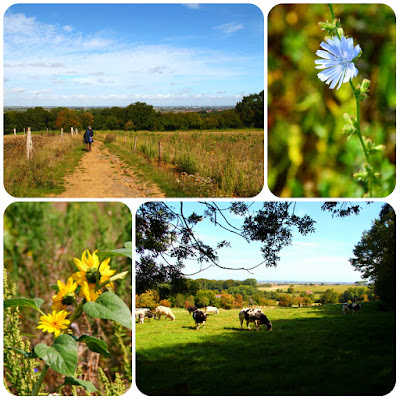 Mission accomplished, we dropped off our purchases at the cottage, and then - in spite of fearing the worst - entered our next destination, which was the nearest address we could find for the car park of the nature reserve we'd picked for the start of our walk.
I'm sure that by now you can imagine our surprise when our journey went smoothly and that for once we reached the car park without having to drive around in circles. 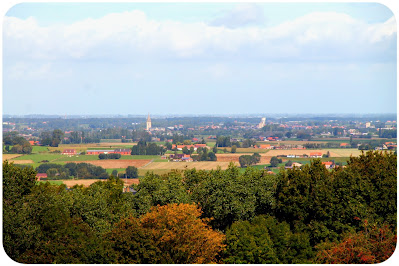 The reserve, which is called Hellegatbos (bos is the Dutch word for wood) lies on the slopes of the 129 m high Rodeberg, one of a range of hills the area to the south of Poperinge is famous for.
Again, this is somewhere we've been before, but the walk we did about three years ago mainly concentrated on the wood itself, where woodland paths and steps endlessly climbed and descended.
This time, after admiring the slightly hazy view towards Poperinge and beyond, we decided to keep the wood on our left and descend into the valley towards the village of Westouter. 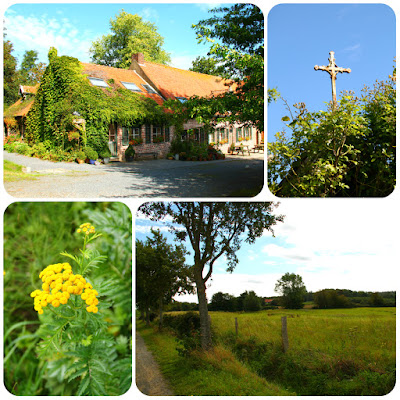 Country lanes took us past idyllic ivy-covered farmhouses and between acres of fields and meadows. The first of the many chapels lining the roads here (there are an estimated 200 of them in the area) was almost hidden from view by shrubs and creepers, its grimy window effortlessly hiding its interior. 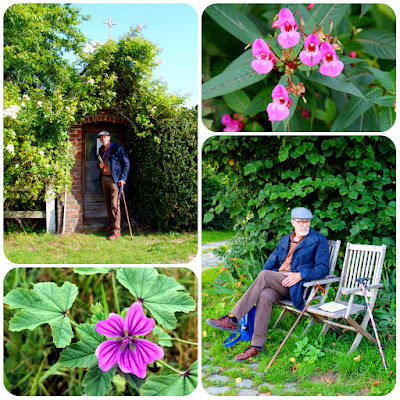 As our walk took us firmly outside the reserve, benches were few and far between. We were starting to get seriously peckish by now, so these two garden chairs couldn't have appeared at a better time. They stood next to the entrance to an exclusive domain with a vineyard and a luxury holiday home, so it is doubtful they were meant for mere passers-by like us! 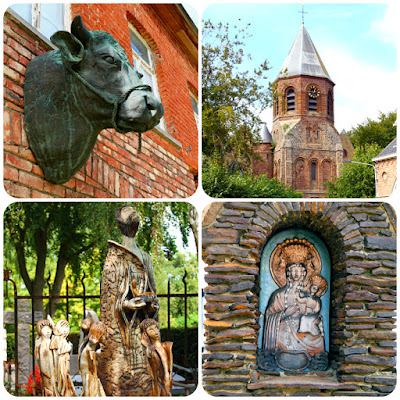 Thus fortified, we continued until we reached Westouter, which we strolled through, briefly visiting the St Eligius church and halting in front of the little chapel honouring the Black Madonna of Czestochowa (bottom right), commemorating the liberation of Westouter by the Polish 1st Armoured Division in September 1944. 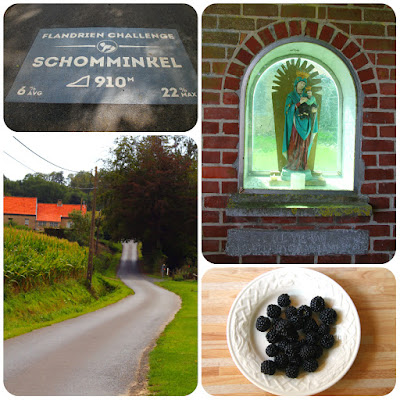 We left the village, walking back in the direction of the wood via the Schomminkelstraat, a small but seriously steep country lane, where a challenge is set up for any would-be cyclists.

Our route thankfully went off-road here, so that our climb to the top was gradual and more gentle.

Before we did so, however, we paused at another little chapel, with Mary and baby Jesus brightly lit by the afternoon sun.

At one point, the lane was lined with blackberry bushes, their juicy fruits ready for the picking. Alas, we didn't have a suitable container with us, so that we had to limit ourselves to the handful we could safely carry home inside our sandwich wrappers. 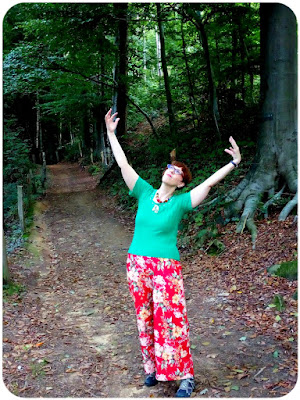 Upon reaching the wood, we still had a serious climb ahead of us, so about half-way we took a breather on a conveniently placed bench. Ah, doesn't it feel good to breathe in that typical end-of-summer woodland air and savour its sensory delights! 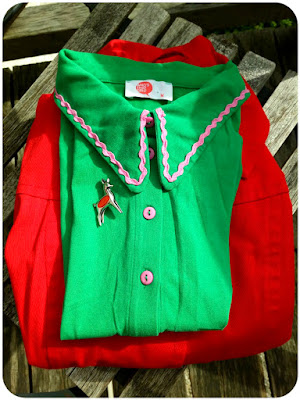 All too soon, we were back at the car park. However, that didn't mean the day's adventures were over. Helped by our Satnav, we pointed our car into the direction of Poperinge, and in particular its small edge of town charity shop.
Pickings were slim, as they were about to do their seasonal changeover, but I still managed to find a red H&M coat, as well as a green sleeveless top trimmed with pink rick-rack from Belgian label Who's That Girl, on the almost depleted but seriously reduced rails. A quick glance at the jewellery display at the till yielded the cutest Bambi brooch, which obviously had to come home with me. All this for a mere € 7! 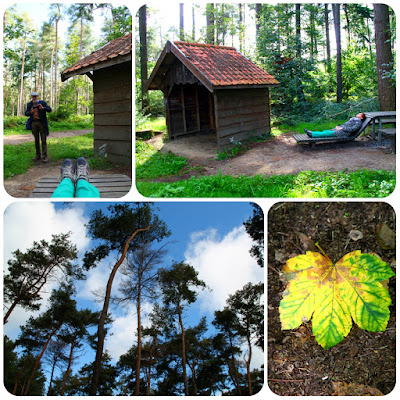 A chilly wind heralding a drop in temperature and the imminence of rain on Saturday made me re-wear Monday's green trousers and dotty Phase Eight raincoat, the latter a Shropshire charity shop find.

It looked set to remain dry in the morning, so we wasted no time in going for the final walk of our holiday, opting for another nature reserve, Helleketelbos. This being only a ten minute drive or so from the cottage, we were there really early.

After parking our car and having a look at our walking map, we set off, soon coming across a wooden shelter and adjoining picnic table with built in sun lounger. 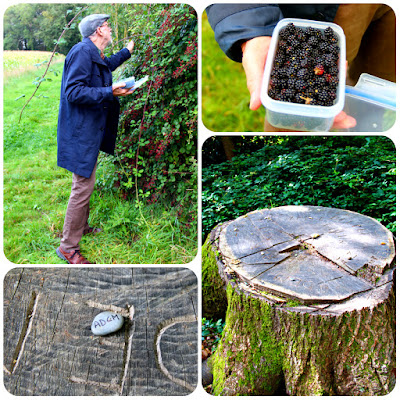 We were intrigued by this tree stump with the words breathe, feel, see, hear and smell carved into its surface, accompanied by small pebbles bearing the corresponding words. The one on the bottom left says adem which means breathe. And that's exactly what we did: breathe in whole lungfuls of soul-restoring, fragrant woodland air.

Bearing yesterday's experience in mind, we'd come prepared this time and were carrying a plastic tub, which was soon filled to the brim when our walk took us past some well-laden blackberry bushes. 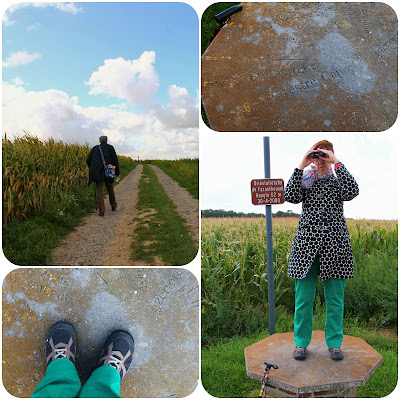 Emerging from the woods, we briefly walked off-map to the Fazantheuvel (Pheasant hill), with its 62 meters the highest point of Poperinge. No sniggering, please! Flanders is, after all, a relatively flat part of the world. 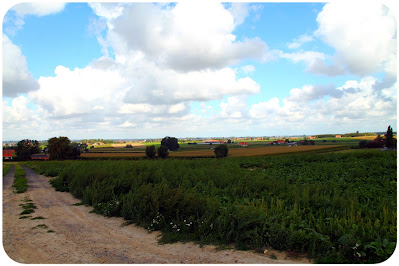 There's a panoramic view across the surrounding countryside and into France which is an almost literal stone's throw from here. A helpful orientation table pointing out the various landmarks was erected back in 2000, together with bench to rest one's weary feet. It was here that, in spite of the blustery wind, we had that day's picnic. 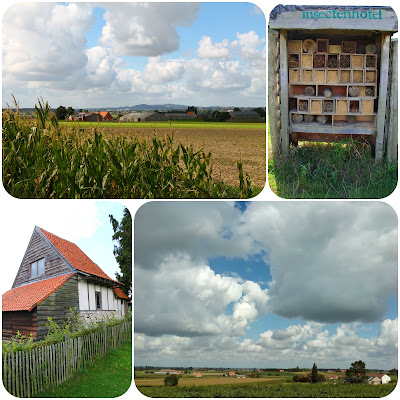 The bump on the horizon on the top left in the below collage is the delightful French town of Cassel, which we visited back in 2017.

It is said that on a clear day you can even catch a glimpse of the sea but in spite of having binoculars with us we never did.

Having made an early start, the afternoon was still young when we finished our walk. On this final day of our getaway, this was the perfect opportunity to visit another chapel. 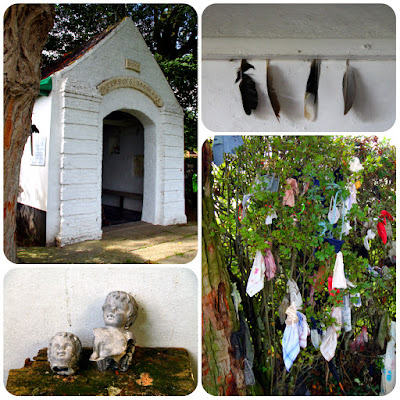 A short stroll from our cottage along a bumpy unsurfaced path, the whitewashed chapel of  Ons Heerens Boompje (literally translated as Our Lord's little Tree) would have been visible from our balcony if a clump of trees hadn't been in the way.
It is a so-called "fever chapel", where people come to pray for the relief of fever and pain as well as miracles in general.
The bushes and trees surrounding the chapel are hung with ribbons, handkerchiefs and other pieces of fabric - indeed in some cases whole garments - since legend has it that this would make fever or pain go away. 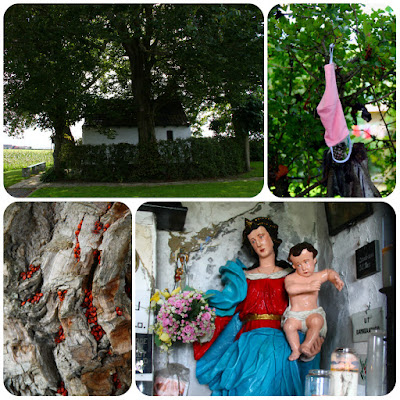 I wasn't in the least surprised to spot a face mask among the cacophony of textiles.
As usual, we burnt some candles and, as we only had a € 5 note, we even took a votive candle back with us as a souvenir to get our money's worth and perhaps invoke the odd little miracle. 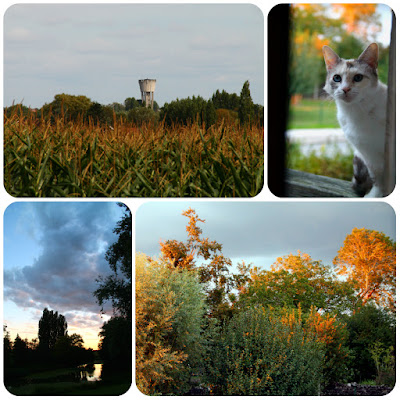 We spotted Poperinge's water tower - a landmark visible from miles around - peeking out above the ripening maize fields on our way back to the cottage, where blue-eyed Chablis was waiting for us.
Sunset that evening provided the grand finale of our holiday week, the sinking sun scattering gold dust and then painting the evening sky with pinks and purples. 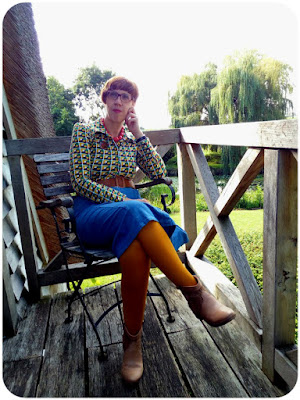 And so, our holiday had come to an end and we would have to return to the daily grind once more.
But not before posing on our little balcony one last time on Sunday morning, looking wistful and prone to a serious case of the end-of-the-holidays blues.