Although I've still got at least two travelogue episodes up my sleeve, I wanted to give both you and myself a little breather, treating you to a catch-up of what else has been happening in September.

Admittedly, I am loath to finish what will probably be this year's final travelogue all too soon, wanting to bathe in its golden hued memories as long as I possibly can. In other words, I am procrastinating!

Plus, I cannot leave it too long to record what normal life - forgive the euphemism - has been like ever since we landed with our feet firmly back on the ground. After all, we are already half-way through September which, incidentally, is exactly six months since things got very pear-shaped indeed.

And let's be frank: that's six months of living a half-life, having one's wings clipped, constantly balancing on a tight rope and treading water. 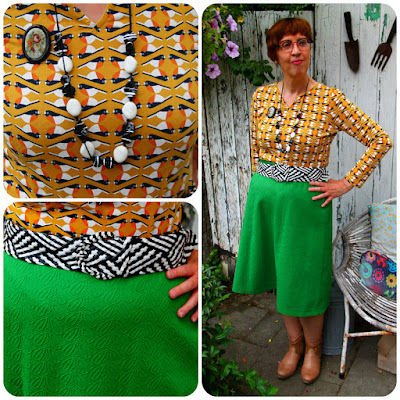 But hey, that's not what you're here for, right? Let's quit moaning and talk about clothes!

Both the skirt and top were unworn items from my travelling capsule wardrobe, so why not give them a whirl instead of putting them straight back into my wardrobe?

The green Crimplene skirt is part of a suit, its companion a short-sleeved jacket, while you might remember the funky, eye-confusing bird-print top as part of a recent charity shop haul. I took my lead from the top's print by adding a black and white plastic woven belt and long necklace. The black-rimmed vintage brooch holds a bouquet of flowers.

Having survived my first day back at work on Monday, which was far less painful than I'd expected, this is what I wore on Tuesday last week. 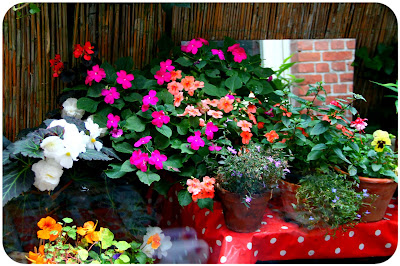 I'd anticipated the worst case scenario of a garden full of wilted patio pots and hanging baskets upon our return on Sunday before last, but thankfully only a handful of plants appeared to have succumbed to our neglect. I immediately set to work with my watering can, giving even the dead-looking ones a thorough soaking.

Apart from two tiny pots of Busy Lizzies, the plants in the passageway have all survived. This photo was taken through our kitchen window, hence the bothersome reflections. 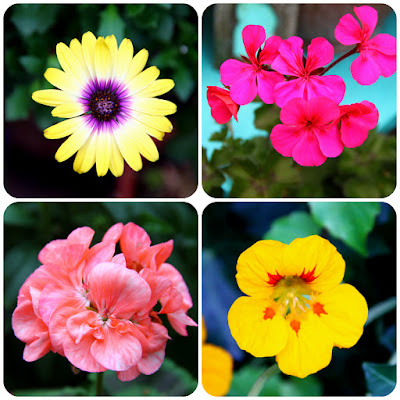 Pelargoniums or annual Geraniums seem to thrive on neglect, as they have all come through unscathed, with those sharing their homes with less hardy annuals having gained the upper hand.

The Osteospermums haven't stopped flowering yet either, and neither have the fleeting but prolific Nasturtiums. 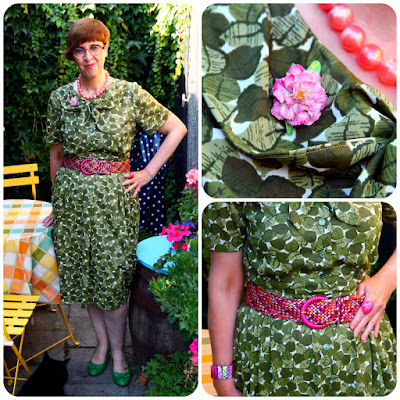 Thursday made me reach for this vintage Casualmaker by Sy Frankl dress which, with its tie collar and satiny fabric, could almost be a carbon copy of the dress I wore a couple of weeks ago. I couldn't believe I hadn't yet worn it this year, which is quite unheard of. No pockets though!
Pink is usually my colour of choice for accessorizing its green leafy print, and this time was no exception. I added a raffia belt which, apart from pink also contains hints of tan, yellow and white, and pinned a pink ceramic brooch to the dress's collar. Further accessories were a pink beaded necklace and plastic ring and pink, yellow and turquoise bracelet. My green shoes were the only retail items in my outfit. 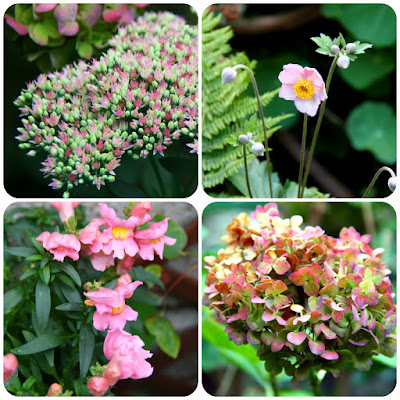 My outfit definitely matched some of our garden's flowers: the bubblegum pink of Sedum spectabile, the first of the delicate, blush pink Japanese Anemones, the dusky pinks of the Hydrangea blooms in their Autumn attire and the cotton candy pink of the Snapdragons. 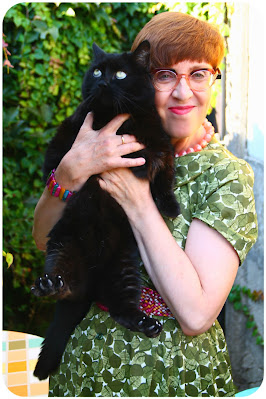 Our little monster seemed to be glad that we were back, although we suspect that what she'd missed the most was being able to go out into the garden. Nevertheless, she did endure - however briefly - a spot of enforced hugging. 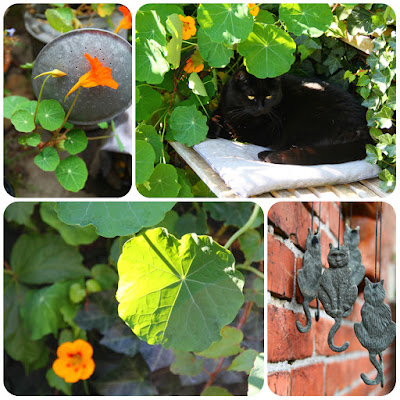 Madam's favourite spot is on her old faded cushion at the far end of the bench, where she is now enjoying the shelter of an umbrella of Nasturtium leaves.
On Friday, our neighbour was having his windows replaced, so we escaped the constant hammering and drilling by going on an extended shopping trip.
We'd even taken a picnic to be consumed at the famous Art Deco water tower. 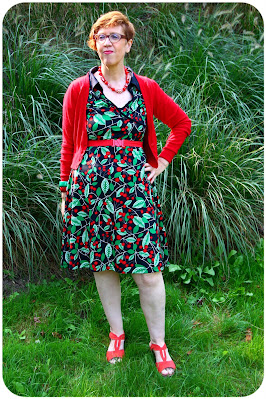 I was wearing the cherry print Zoë Loveborn dress I'd snapped up during our first post-lockdown charity shopping trip back in July. I accentuated my waist with a red elastic belt with flower clasp which used to belong to another dress from the same brand. My red and white spotty necklace came from a beloved but defunct vintage shop, while both bracelets were charity shopped.
It was a reasonably warm but slightly windy day, so I wore a red cardigan on top most of the time I was outside. The tomato red sandals were a sales bargain back in August. 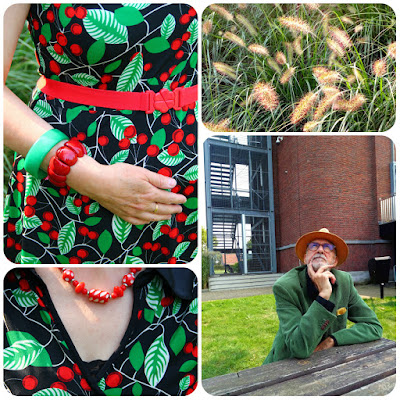 We visited a total of three local shops where I was lucky enough to find several colourfully patterned garments. You'll get to see them in full either on me or my loyal assistent Angelica soon, but here's a little taster. Clockwise from top left are a vintage circle skirt, a King Louie dress, a frilly Kookai shirt, a Saint Germain Paris wrap dress, a King Louie faux-wrap top and a H&M jacket. 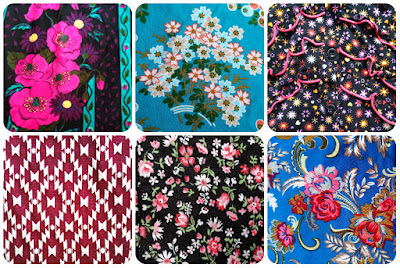 The jewellery displays yielded two beaded necklaces and a handful of modern brooches. The flamingo and stag head are in a soft and squishy plastic, and might have been intended for children, but beggars can't be choosers in these flea market-less age. Besides, I do love their quirkiness.
Our final buy was a 1970s yellow snack-size Tupperware tub, which you can see in one of the upcoming collages. 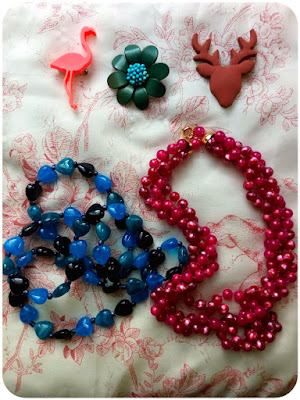 People were generally well-behaved in all three of the shops, although there was a little episode in one of them. We'd gone in together with a trolley but at some point we briefly went our separate ways. I was just about to rejoin Jos, when one of the sales assistants asked me where my trolley was. I truthfully admitted it was with my husband upon which he told me off as if I was a naughty child.  I retorted I couldn't see the problem as there was nobody else in sight so social distance was more than guaranteed. None too pleased, we went to pay at the till, where the same guy turned up and started ringing up our purchases, wearing his mask under his nose. Obviously I couldn't let the opportunity pass. His defense was - wait for it - that his glasses would steam up otherwise! The cheek! 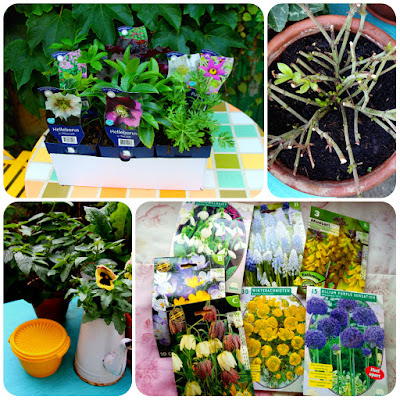 Our last stop for the day was the garden centre, as we needed to stock up on bread mix from their baking department. I'm sure it won't surprise you that I couldn't make it past the display of Spring bulbs without making some purchases. Spoilt for choice, I had to keep the diminutive size of our garden in mind and limit myself to a few old favourites and one oddity, some golden hued grape hyacinths.
And then there was a buy 5, get one free, sale in the perennials department, which it would have been silly not to make use of. We picked three different varieties of Hellebore and a Pulsatilla fort some early colour next year, as well as a Heuchera and an Astrantia.
On the top right is one of our Chocolate Cosmos (Cosmos atrosanguineus) plants, both of which seemed to be write-offs after our week away. I cut them back and then watered and fed them, and now one of them is full of green shoots. Result! The other one, I'm afraid, didn't survive. 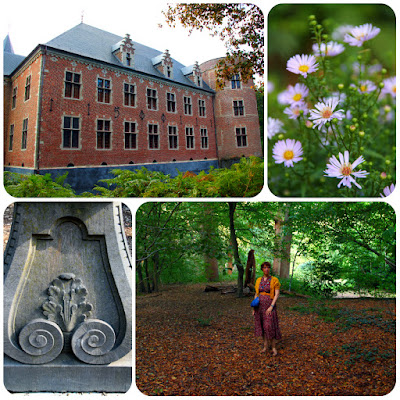 Saturday was another bright and sunny day, the weather slowly but surely gearing up for Monday and Tuesday, for which temperatures in the low thirties had been forecasted.
It was my birthday and although we hadn't anything in particular planned for the day, during a breakfast brainstorm we came up with the idea of driving up to Castle de Renesse in Oostmalle, which is located in the north of the Province of Antwerp. 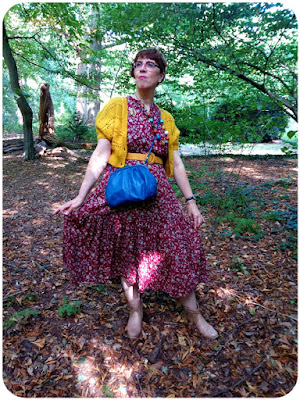 You've joined me there quite a few times before, as the castle is the venue of a small antiques fair taking place twice a year, in Spring and Autumn.
Sadly, no markets are bound to take place until further notice, but the estate and woodland surrounding the castle are the perfect place for a ramble.
I was wearing a new dress for the occasion, and yes, I do mean new and not new-to-me! I bought in the C&A sales when we were looking for a pair of shorts for Jos back in August. It's a fit and flare midi dress with a flouncy hem and I thought its lightweight flower sprinkled burgundy fabric was just perfect for this time of year.
I used contrasting ochre yellow for my belt and batwing cardi, and added a favourite multicoloured beaded necklace. 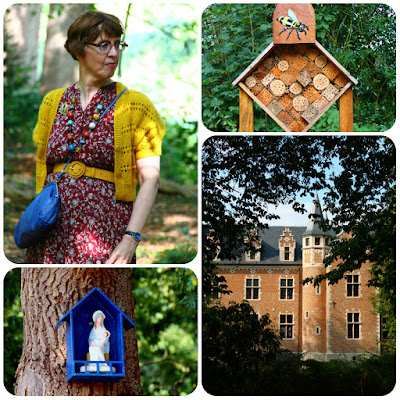 We were pleased to see that the scaffolding, which had been rather spoiling the view the last couple of times we were there, was finally gone. However, we were completely stumped by the fact that there wasn't any water in the moat, leaving the castle's foundations bare.
At first we thought they'd drained the moat as part of the restoration works, but when we passed several sorry looking minor ponds without a drop of water in them, we were starting to get a bit worried.
The alarm bells starting ringing in earnest when, on our way back, we passed the lake in front of the castle. At other times the most picturesque of views, we were now looking at the castle across a muddy wasteland. A newspaper article only a couple of days later confirmed that there was a huge problem which is attributed to a combination of the ongoing drought and drainage caused by two nearby building sites. 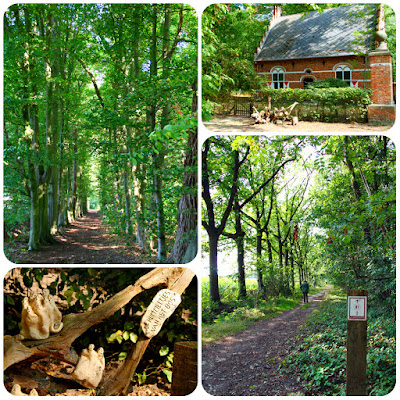 Our walk took us to the outskirts of the estate and, in spite of not having a walking map of the area, we briefly ventured off the well-trodden paths aided by a photo I'd taken with my phone of the map displayed at the entrance.
And no, we did't get lost and safely made it back to the paths criss-crossing the estate, eventually finding a secluded picnic bench in the woods to rest our feet and eat our sandwiches. Just the two of us, a couple of  wood pigeons and a pesky wasp.
We were intrigued by what initially looked like a piece of driftwood in front of the picturesque old bailiff's cottage (top right). 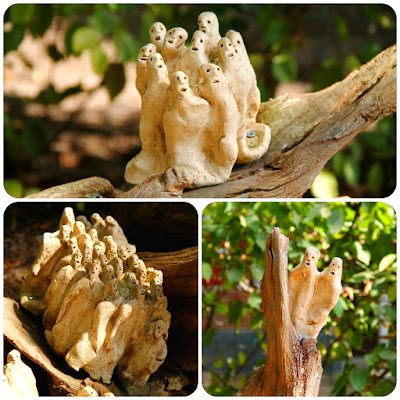 Closer inspection revealed that it was alive with a veritable army of strange looking creatures.
An inscription clarified that these were "de hummeltjes van het bos", for which the closest translation I can think of is "the urchins of the wood". An enchanting encounter although I thought some of the urchins were looking quite startled.
So, that's it for now. I will be resuming my travelogue in my next post and hope to see you there.
Until then, dear friends and readers, do stay safe, positive and as fabulous as possible.
Posted by Polyester Princess at 19:29