It feels as if it was light years ago since my last post when, in fact, it was less than two weeks! But surely that's a good thing, as it means that I was able to get away from it all and leave at least some of my worries behind.

As holidays are wont to do, ours was over in the blink of an eye. Strangely enough, even though the time seems to have passed quickly, the slower pace at which we lived makes it seem as if we were away for more than just the one week. I'm finding it hard to re-adjust to what for want of a better word I'm calling my normal life, which once again involves alarm clocks and deadlines, even if they still only have to be faced two days a week. 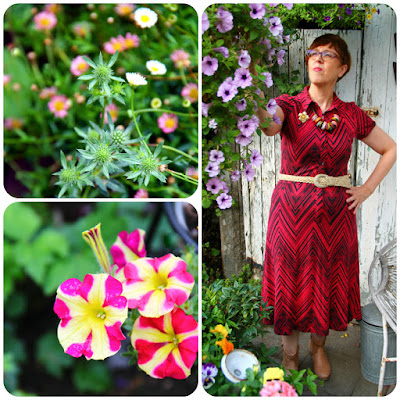 As I'd already hinted in my previous post, the week before our holiday was a hectic one.  Involving three rather than my usual two office days, as well as a visit to the hairdresser, not to mention the dreaded packing, there was hardly any time for outfit photos, which we only managed on Tuesday.

The midi length dress I was wearing, with its striking red and black chevron pattern, is from Dutch fashion label Mexx, picked up for € 4 in a charity shop two years ago. My accessories were a hessian belt, a vintage celluloid flower brooch and a multicoloured necklace from Accessorize, bought when many moons ago they used to have a shop in Antwerp.

I was despairing about having to leave the garden behind, especially our hanging baskets and patio pots, which would have to fend for themselves while we were away. 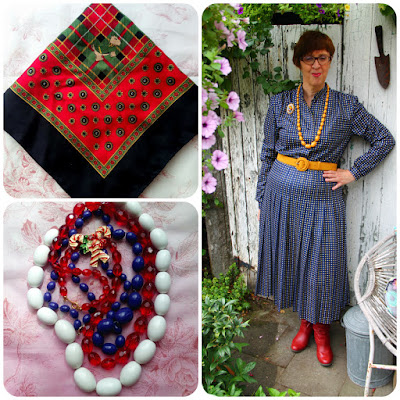 But then I was greatly cheered up by the arrival of the postman with a package which came all the way from the UK.
When out charity shopping, the lovely Gisela from Miss Magpie's Musings, happened upon this long-sleeved and pleated vintage dress, which made her think of me. Its pattern is tiny white and yellow dots, and it came with a self-fabric belt, which for a couple of quick shots I replaced with a yellow one. Expect to see more of it this Winter!
Gisela's package also included a pretty Scottie dog print scarf, three necklaces and a brooch. What a heartwarming surprise! 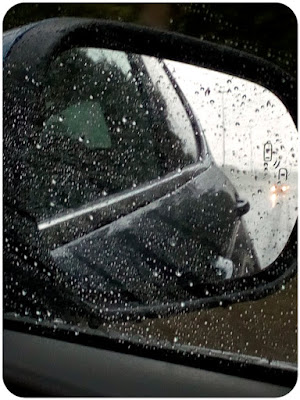 Saturday was spent packing - which went smoothly, as I'd already done it all in my head - and then, finally, Sunday dawned. On a dull, cloudy day, but never mind that.
On a wing and a prayer, I gave all the pots and baskets a good drenching and then we bade Phoebe goodbye, setting off in a Westerly direction just after midday.
The rain, which had been threatening all morning, arrived in a torrent when we were on the motorway. Fortunately, gaps had appeared in the grey blanket of clouds by the time we reached our destination less than two hours later. 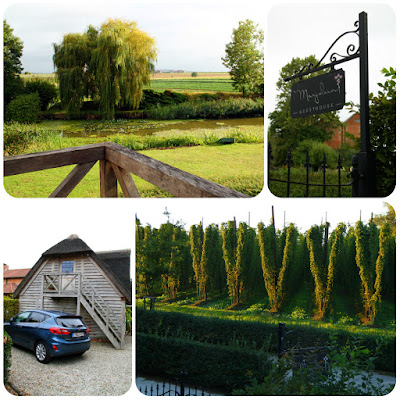 Following all the tight-rope walking and uncertainty of the last five and a half months - not to mention the heart-wrenching cancellation of two holidays - it felt wonderful if slightly unreal to have made it here.
After eight previous visits, the little wooden and thatched studio cottage at Marjolein guesthouse can truly be called a home away from home. Much better than home, actually, as it's so peaceful and quiet.
And then there's the view, which is unsurpassable, with the hop fields across the road at the front and the domain's lake backed by the West-Flemish hills at the side. The weather forecast had promised us mainly dry but reasonably chilly weather for the week, and as we'd planned to do lots of walking, I'd packed several pairs of trousers.
My travel outfit, however, was one of my Diolen delights, in Autumnal shades on a deep purple background. To combat the chill, I added an orange cardigan. The ochre yellow of the print was my guideline for my belt and beaded necklace, while my brooch loosely referred to most of the dress's colours. 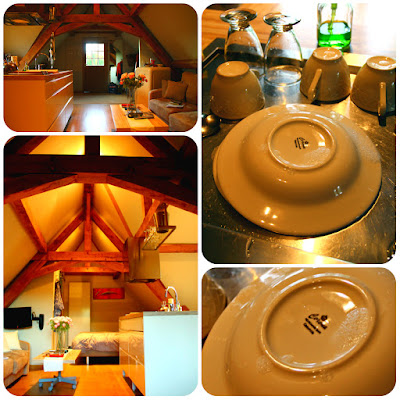 There was no need to leave our little haven again that day, as we'd brought all the ingredients for our evening meal - a salad - as well as breakfast on Monday.
Even doing the dishes was relaxing and it was easy to forget there's a pandemic out there. That's if you don't look too closely at the marks at the bottom of the plates! Arrgh, there's just no escaping it! 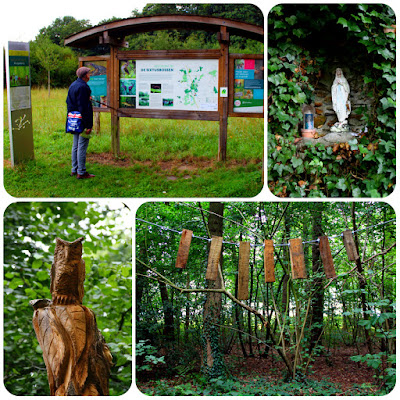 On Monday morning after breakfast, we consulted Jos's weather app, which told us that there might be some light rain late morning, but that there was a 100% chance of rain in the afternoon.
So, instead of our original plan, which was to do a food shop first and then go for a walk, we switched things around and set off for some nearby woods in the morning.
The Sixtusbossen (or Sixtus woods) are a 300 hectares complex of woods, which is cared for by Natuurpunt, the largest Belgian nature conservation organization. 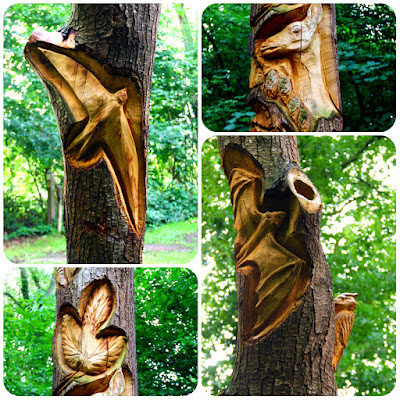 The walk we'd intended to do was supposed to be way-marked, but if it is, we never found any signs, so we just made up our own walk using a walking map of the area.
We'd hardly made a start when some light rain began to fall, so we waited it out in a small clearing surrounded by tree trunks bearing some exquisite carvings of woodland fauna and flora. The rain lasted less than five minutes, so soon we were able to continue our walk. 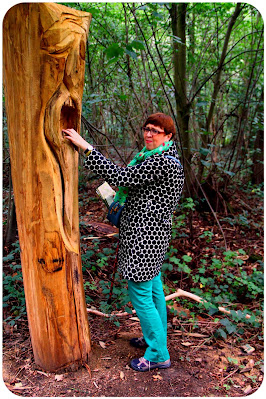 There were surprises around every corner, including a Madonna statue in an ivy clad tree hollow, a makeshift musical instrument and a sad looking green man with the sharpest of teeth. Ouch!
And what about a giant swing set in the middle of the woods? It had been absolutely ages since either of us had been on a swing and we paused here for a while, reliving long-forgotten childhood moments  by swinging blissfully to and fro. 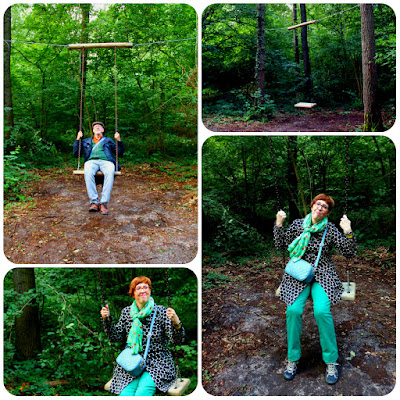 Our partially self-designed walk meandered through a quilt of woods, meadows and fields heavy with crops, with the scent of approaching Autumn tickling our nostrils.
Then, a bittersweet surprise awaited us at the end of a track: Dozinghem Military Cemetery. 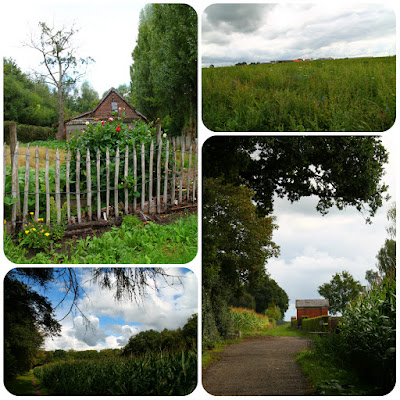 In preparation for the Third Battle of Ypres in 1917, the British army set up a number of extra field hospitals behind the lines. There were three such hospitals in this area, and the soldiers who died of their wounds were buried here. The place Dozinghem does not actually exist. It is the name given to one of the casualty clearing stations by the troops, the others being called Mendinghem and Bandaghem. 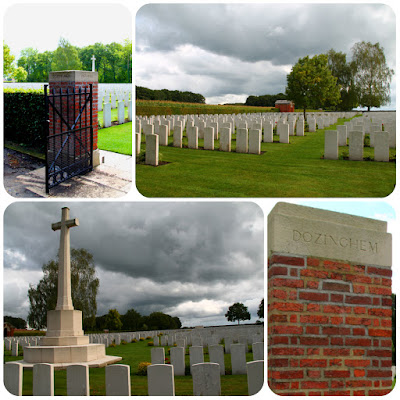 Gem or Ghem is a common suffix in Flemish towns and villages, corresponding to the English gham or ham (as in Birmingham), so naming the hospitals after the verbs "to doze", "to mend" and "to bandage" certainly shows that the British troops did not loose their sense of humour, even during the atrocities of war. 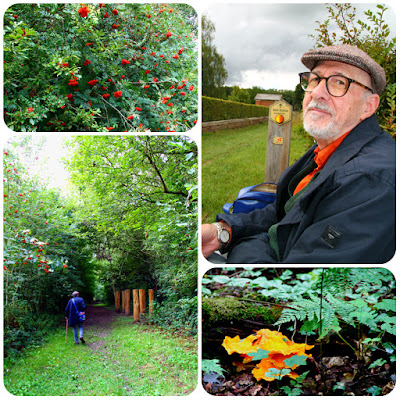 After a spot of lunch sitting on a bench just outside the cemetery, we continued our walk, past trees and shrubs laden with Autumn berries, lethal looking fungi, and the ruins of a spaceship, until eventually we arrived back at our car. 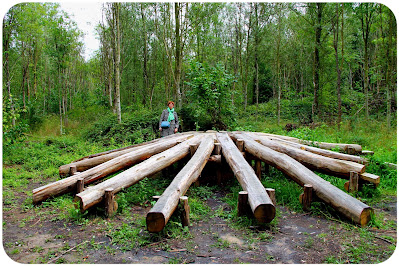 Too early to call it a day, we decided to visit the sleepy village of Westvleteren, its claim to fame being the Abbey of St. Sixtus and, more to the point, its brewery.
Here, the monks of  St. Sixtus have been financing their livelihood and the maintenance of the monastery by brewing the much sought-after Westvleteren Trappist beer since 1839, when the abbey received a brewer’s licence signed by king Leopold I.
The monks only sell to private customers and the famous beers can only be purchased through the webshop and  picked up at the sales centre located at the abbey at certain times. 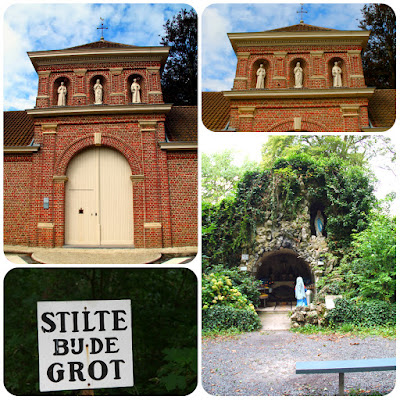 As we do not drink alcohol, it was obvious we weren't there for the beers!
While St. Sixtus Abbey might be a pilgrimage site for beer aficionados the world over, we took a little pilgrimage of our own, by walking along the tree-lined lane at the right of the abbey towards the Lourdes grotto.
Apparently, the shrine was built in 1921 out of gratitude that the abbey and its inhabitants were spared destruction and death during the First World War. 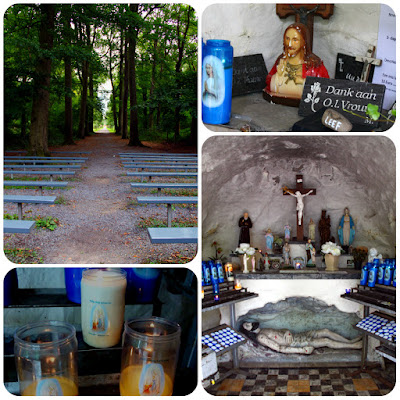 Appreciative of all things kitsch, we can never resist visiting these shrines, and usually spend a little money to burn a candle too. Ours is the one in the middle, which was supposed to burn for two days.
On a wing and a prayer and a burning candle ...
Apart from a grandma and her three grandchildren, who were playfully noisy in spite of the sign to be quiet, there was nobody around, so we sat down on one of the benches to have an afternoon snack.
Then it was back to our car for that dreaded food shop. Back to reality, face masks and ... the silliness of ultraviolet disinfection of supermarket trolleys! 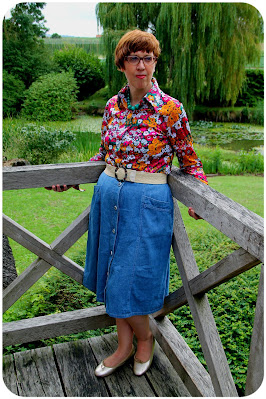 Typically, it didn't rain at all in the afternoon. In fact, the day had turned out to be quite sunny, so back at the cottage I exchanged my green trousers for one of the skirts I'd packed just in case.
The floral blouse was a charity shop find back in February 2019. You've seen it before, but here's a close-up of the print to jog your memory.
So, that was it for now. I'll be sharing more walking adventures in my next post.
In the meantime, as always, stay safe, sane and positive!