We're well into August's final week by now, and the weather seems to have changed completely almost overnight. With the rain pitter-pattering on the landing's skylight behind me and strong gusts of wind making the birch tree in our neighbour's front garden groan and sway, it definitely felt as if Autumn had arrived prematurely on Tuesday. 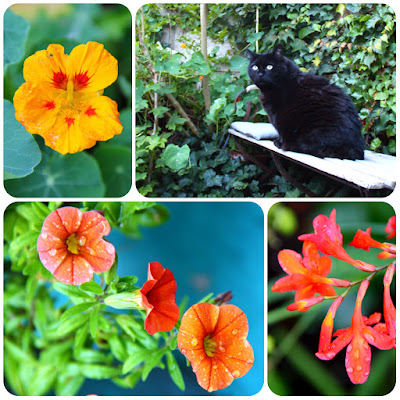 It's hard to believe that only a week before the thermometer was still nudging the low thirties and that we were groaning and moaning about having to live through yet another sweltering, sweat-inducing day.
The few showers we'd had earlier last week had been welcome treats for the garden, the flowers showing off the smattering of raindrops as if they were precious jewels. They were soon evaporated by the strength of the sun, however, as she had another go at putting the plants' resilience to the test. 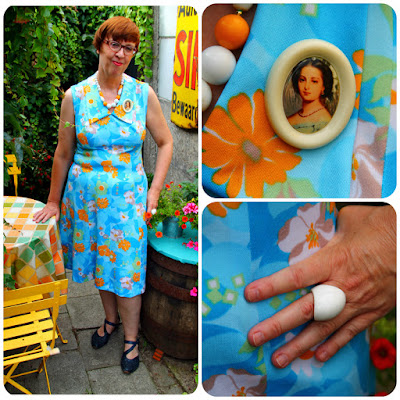 The heatwave decided to give it one final push on Thursday before last.
Browsing my wardrobe for that day's outfit, my eyes alighted on this sleeveless vintage frock. With its drop collar and its cheerful blue, orange and white colour scheme, it has seen the light of day every Summer ever since I found it at Think Twice several years ago.
I picked white and a hint of orange for my accessories, which included a beaded necklace from a sorely missed vintage shop, a flea market brooch and one of my trademark plastic rings.
There had been another National Security Council meeting that morning resulting in a couple of minor relaxations of the rules. No more sneaking around and secretly meeting in the charity shop aisles as shopping in twos would be allowed once again starting the following Monday. 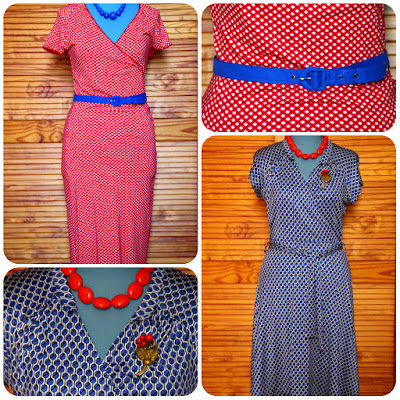 But we were only Thursday, and I was feeling a bit jittery, so I suggested we go to the small charity shop in the next village and try our luck.
This is generally one of the quieter shops, and their stock can be very hit or miss, but it seemed we were in luck this time. While we acted as if we were two strangers, and Jos went off to browse the records at the back of the shop, I perused the well-stocked clothing rails, finding not one but two dresses.
The very hard to photograph red gingham one (which rather looks like polka dots here) is another King Louie, while the blue and white one is from Belgian high street shop Lola Liza. 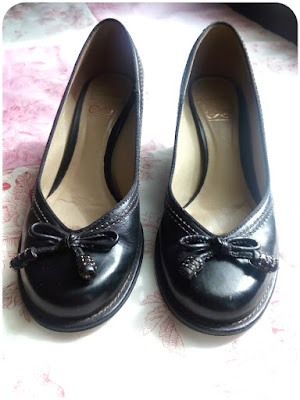 A pair of brand new looking black Clarks shoes in my size for just € 4?  Yes, please!  I already have this model in burgundy (a flea market find!) and they are insanely comfortable. Perfect for Autumn as an alternative to ankle boots. 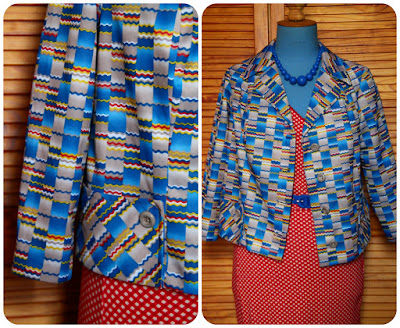 My heart made a little jump of joy when I spotted this vintage hand-made jacket. With its funky and colourful pattern, it effortlessly stood out among the rail of yawn inducing jackets. Its fabric has a deliciously silky feel and it is lined in a shimmering pale blue. 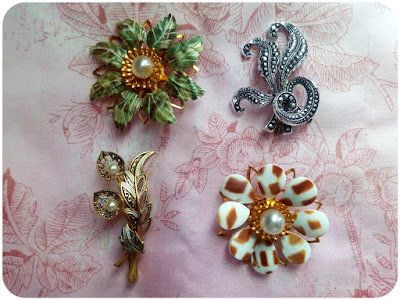 Just as I was about to pay at the till, I noticed a couple of brooches in a display cabinet. Priced at € 1 each, it would have been downright silly not to snap them all up.
All this for just € 22!  I'd quite forgotten how rewarding charity shopping can be.
On our way back home, we stopped at a large local shoe shop, as Jos needed a new pair of slippers. With the sales still ongoing, it was almost inevitable that I too made a purchase ... which you'll get to see later on in this post. 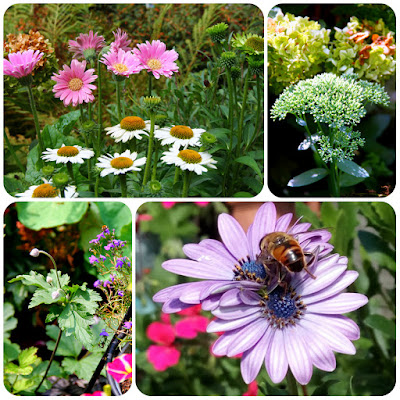 The temperature was supposed to drop considerably on Friday, but the day started bright and sunny, so that soon it climbed back into the high twenties.
The garden is showing signs of impending Autumn nonetheless.  Half-hidden by the faded and drooping blooms of our Hydrangea, the first of the flower heads are appearing in the Sedum spectabile (top right) we planted many years ago. With its fleshy foliage and constellation of tiny, star-like, soon-to-be pink flowers, they are a late Summer source of nectar for the garden's army of bees.
The Japanese Anemone I planted back in July surprised us with its first flower buds (bottom left), while a bee was going crazy over yet another Siamese twinned flower head produced by the purple Osteospermum. 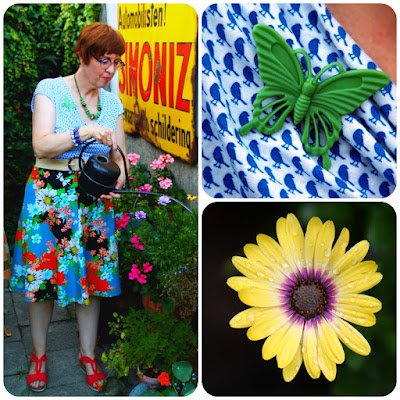 I opted for a skirt and top combo that day, a happy marriage of vintage and modern.
The Diolen skirt with its vibrant flower pattern is one of my favourite Think Twice finds ever and has been with me for many years. The top with its cowl neck and tiny bird print (which unfortunately seems to be disappearing into oblivion in all but the close-up photos) was charity shopped, as was the necklace.
And here's the ubiquitous stretchy belt again, making yet another appearance. The butterfly brooch is one of my modern pieces, while the tomato red sandals are my naughty buy from the shoe shop the day before. 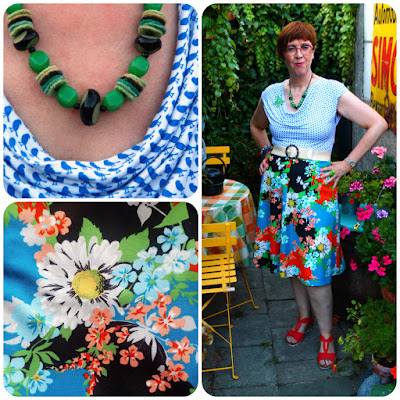 Buoyed by the previous day's success, we were raring to go and check out two of our favourite local charity shops that morning. I have been missing my rummaging fix for far too long already. 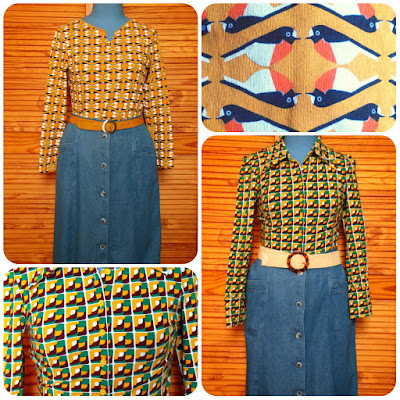 Two groovilicious long-sleeved tops ended up in my trolley. The green, brown and yellow shirt on the bottom right is from Belgian label Wow To Go, and I already have a dress in the same pattern.
A close-up of the pattern of the one on the top left reveals that it is actually made up of birds, which isn't immediately apparent when looking at it from afar. 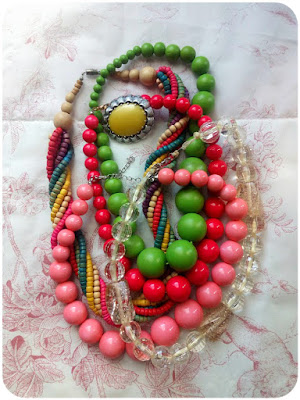 The jewellery display in one of the shops came up trumps as well, with a handful of necklaces and a yellow-hearted brooch. 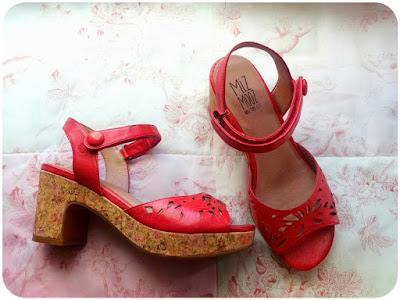 But my best find of the day must have been these glorious cork-soled red sandals from vintage style shoe label Miz Mooz. Again, they look as good as unworn, and the best is yet to come: their incredible € 3,20 price tag! 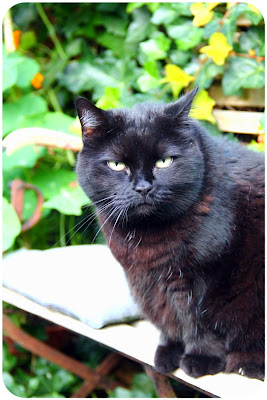 Now, this is where this post would normally have had its conclusion, treating you to a glimpse of Phoebe under the influence!
After ignoring the catmint I'd planted for months, the silly beast has now taken a liking to it after all and regularly takes a good sniff when passing it on her way to the back of the garden.
I was going to publish this post on Thursday and then squeeze in another, to be scheduled one before we leave on Sunday. Being strapped for time with an additional office day this week, there was nothing for it but to make this one a little longer and leave it at that. 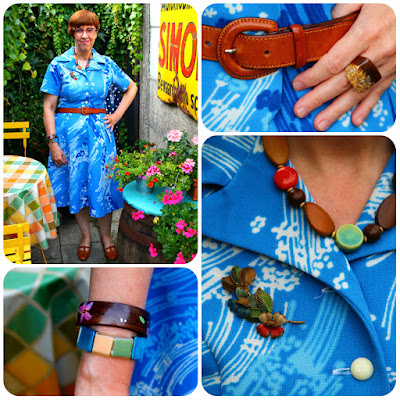 Let's start by having a look at what I was wearing on Saturday. I forgot to make a journal entry, but the polyester frock I'm wearing is telling me that the temperature must have dropped sufficiently enough to justify wearing it. I remember wearing an orange cardi on top for most of the day, which apparently I'd ditched for the photos.
My accessories consisted of a caramel coloured leather belt, an old wood and ceramic necklace, charity shopped bangle and bracelet and a glitter and brown plastic ring. Oh, and my vintage brooch, which was a gift from my friend Inez. 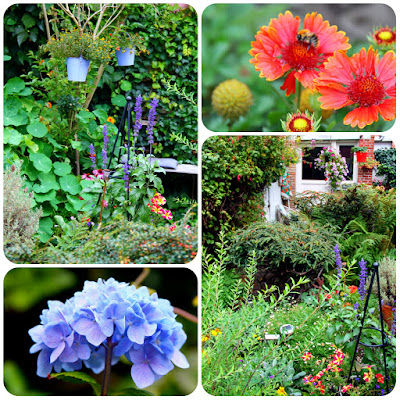 The garden is looking very lush, which I hope it will continue to do for some time yet. We are fully aware we might lose some of the patio plants while we're away, and can only hope for the best. Which would be that it regularly rains in Antwerp, but remains dry in the west of the country! 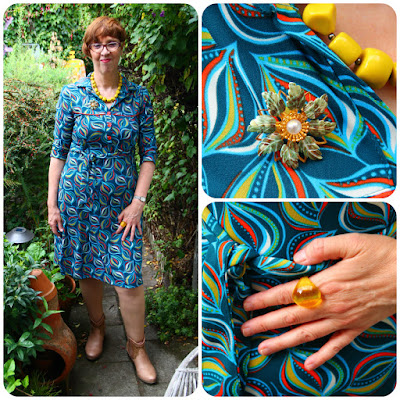 My final outfit is last Sunday's, when we were invited to a bubbled and socially distanced family barbecue at Jos's son and daughter in law. You know, the humble servants of  Lady Abby!
The weather did let us down a bit at first, as we woke up to a grey and rainy morning, but the sun came out later and all was well.
Nevertheless, I'd progressed to wearing three-quarter sleeves, nylons and ankle boots. Couldn't run the risk of catching a chill, could we?
The dress is an old retail buy and I'm still head over heels with its print after all these years. But while I often use red as an accent colour, this time I took the lead from the yellow bits in the print, adding a yellow necklace and ring. The green flower brooch is one of those I picked up at the first charity shop we visited on Thursday. 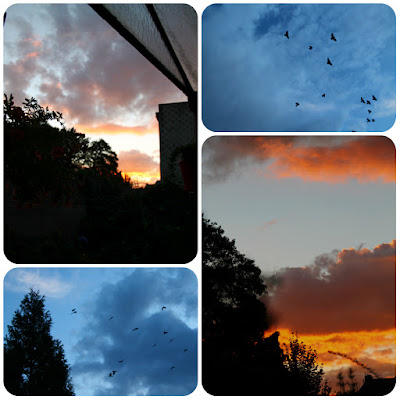 Then the rain and stormy weather came. August rain and skies pitch black with storm clouds. The sky ringing with crows cawing and screeching blue murder. The sun going down while making one more attempt to set the day on fire. An unmistakable scent of pending Autumn in the air.

Did we already have Summer's grand finale?

So, this is it then. I'll be welcoming our week away with open arms.

Stay safe, and I'll see you at the other side!

* From The Unabridged Journals of Sylvia Plath, 8 August 1952:

"August rain: the best of the summer gone, and the new fall not yet born. The odd uneven time."