We're right in the middle of a heatwave at the time of writing. The temperature has been gradually creeping towards the high thirties since Tuesday and I'm currently taking shelter indoors as I feel as if I'm about to spontaneously combust whenever I attempt to take a step outside. It's bearable until late morning and well after 9 pm, but in between our little heat trap of a garden is a no-go area. Plants are wilting before our very eyes and some are slowly but surely burning to a crisp. I've brought my laptop downstairs where it's reasonably cool and I'm sat here writing this post in semi-darkness, as we are keeping the blinds down for most of the day.

I know some of you relish the heat, and I do wish I could bottle up some of our excess degrees and send them off to Vix who, I'm sure, will receive them with open arms! 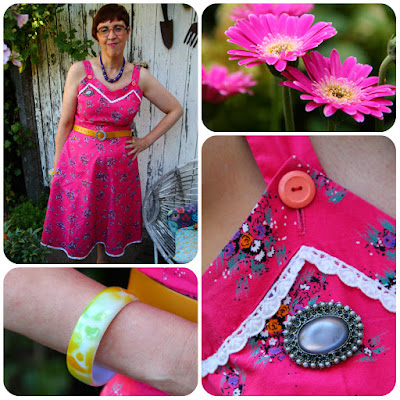 We had a general rehearsal of what was to come on Friday before last, when the sun was out in full force and the mercury gleefully soared to well over 35°C, making it the hottest 31st of July since 1943.

I initially dressed in this pink vintage sun dress, trimmed with real broderie anglaise and sprinkled with clusters of flowers. To counteract all the pinkness, I added a white, yellow and green plastic bangle (a recent charity shop find) and yellow belt. The purple necklace, in its turn, tied in with the lilac flowers in the dress's print. The opalescent purple brooch isn't vintage but has been with me since before my brooch collecting days. Unbelievable as it may sound, it came from H&M. 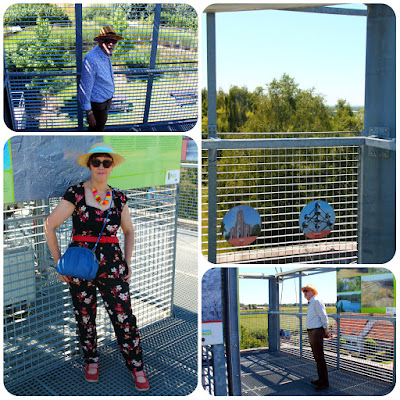 By lunchtime, Jos made sandwiches and we once again drove to the picnic area at the water tower.

As we'd planned a nature reserve walk afterwards, and I didn't want to go bare-legged or shouldered, I changed into something more appropriate. The jumpsuit, which was a UK charity shop find last year, fit the bill perfectly.

After we'd eaten our sandwiches at the shadiest of the picnic tables (visible behind Jos in the photo on the top left), we made the effort to climb up to the platform for a glimpse of the Atomium. Judging from the information panels pointing out the landmarks (top right), it should have been visible somewhere behind those pesky trees! 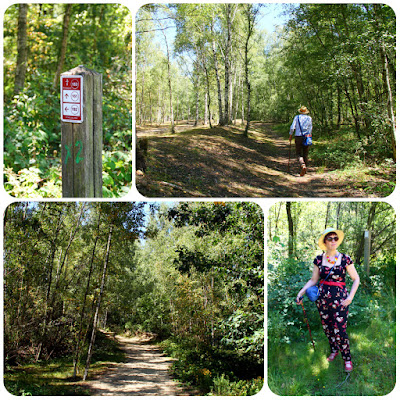 Then we drove to Terhagen for a walk in yet another nature reserve. The village of Terhagen is where Jos grew up. It was smack dab in the middle of brick-making country and, in fact, some of the paths we walked along skirted the very place where once the tiny hamlet called "De Wildernis" had been.

We followed our map and the walking signs through what has now truly reverted to wilderness. Apart from a man on a bike and a single other walker, we didn't meet a soul all the time we were there, so that we could safely remove our masks, which would have been rather superfluous here. 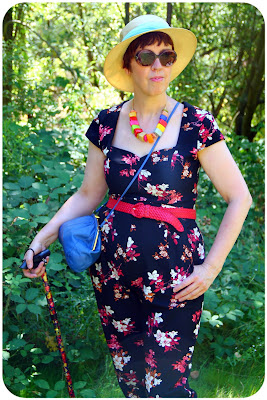 A closer look at my Phase Eight jump suit, with its sweetheart neckline and cap sleeves. In spite of the fact that it fits me like a glove, it was extremely comfortable to wear, without any clinging whatsoever. I didn't even sweat in it very much. My accessories consisted of a red woven belt and a multi-coloured lacquered wooden necklace. Oh, and my sunglasses and hat, which obviously were a necessity in the glaring sunshine and heat. 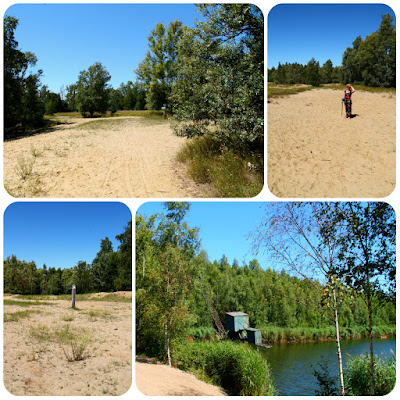 We'd envisioned walking under a shady canopy of trees sheltering us from the sun and all went as planned until we came to a subsidiary of the Sahara: a huge and unforgiving sandpit, which - according to the walking signs - we would have to cross. The sun beat down relentlessly and the sandy soil added its two pennies worth by reflecting the heat, so that it felt like being assaulted from both sides. As I was wearing my Clarks Cloudsteppers on my bare feet, the fine sand kept sloshing over the tops and burning my feet.

I know we should have turned back but I was adamant to have a look at the half-drowned dredger left at the side of one of the ex-clay pits turned pond. 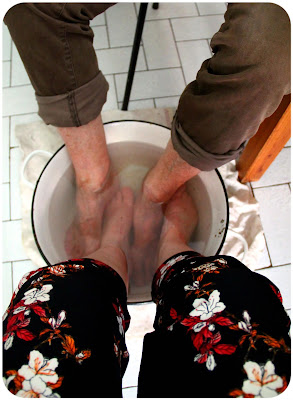 It was the thought of a cool non-alcoholic beer back at home which kept us going. Once there, with our last bit of energy we dragged the enamel tub we keep in the shed into the kitchen, filled it with ice cold water pumped up from the well and ... ah, utter bliss! 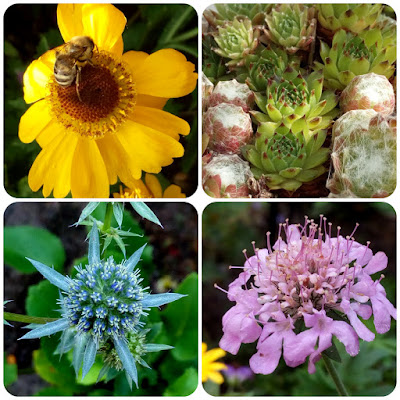 There was a considerable and welcome drop in temperature on Saturday, the first of August. Helped by some overnight rain, the thermometer stuck to the mid twenties, with a mixture of sunshine and clouds throughout the day.

Most of our garden's plants seemed to have survived the previous day's heat unscathed and I was delighted to see that the flower buds in our Sea Holly were starting to show their true colour. 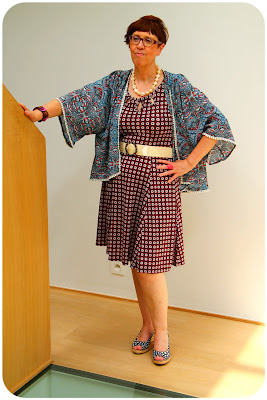 We were on double cat-sitting duties that weekend, both at Jos's eldest daughter's house and his son's.

My outfit choice of the day consisted of the Cassis dress I'd picked up at the charity shop the other week, over which I threw on a lightweight garment I'm keep at the ready on the back of a chair. Charity shopped in June 2019, I think this is what is called a haori. Correct me if I'm wrong, Sheila! 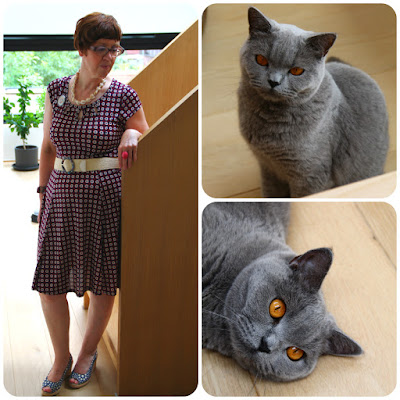 The somewhat haughty Abby was awaiting us at Jos's son's, where obviously we took advantage of their fabulous staircase photo studio.

I accessorized the dress with one of my favourite stretchy belts - I've lost count of the number of times I wore it in the last couple of months - as well as a shell necklace, a circular brooch with flower embroidery, a pink plastic ring and a wood and purple shell bracelet.

Everything but the belt and the Tamaris espadrille wedges were second-hand buys. 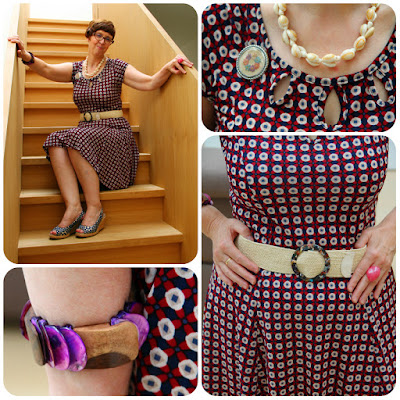 On duty again on Sunday at Jos's daughter's house, where we had to feed the two cats and replenish the drinking water in the bird cage.

I'm head over heels with the magnificent tiles in their hallway! My red and cream sling-back shoes are an old sales bargain, which I keep forgetting about and which I should definitely wear more. 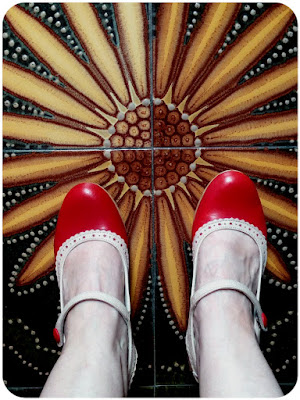 The black cat is called Lies and is a substantially thinner and friendlier version of Phoebe. She came downstairs to greet us, while the tabby cat I've forgotten the name of was too much of a scaredy cat to come out of hiding. It seems we were lucky to catch this brief glimpse of her at the top of the stairs. 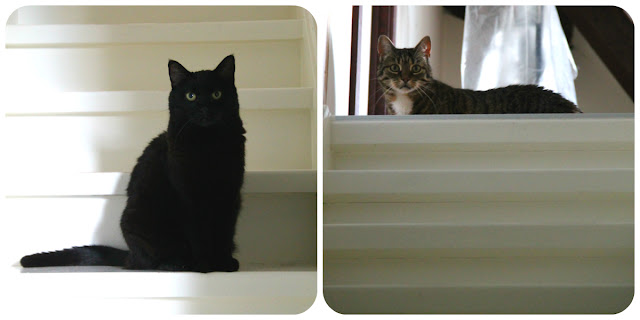 I'll never forget finding this vintage butterfly sleeved dress at a charity shop on my birthday back in 2016, and when I checked my blog to make sure I got the year correct, I saw that I found the sun hat I was wearing for our walk on Friday on the same day! 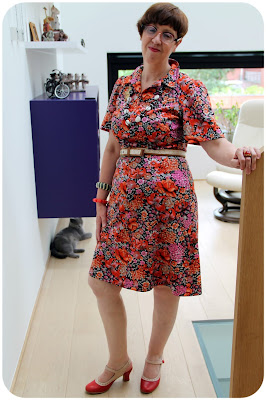 Once again, we made use of the fantastic light conditions and staircase at Abby's headquarters. The lady of the house sat watching us disdainfully  and then decided she had better things to do, like making her toilette! 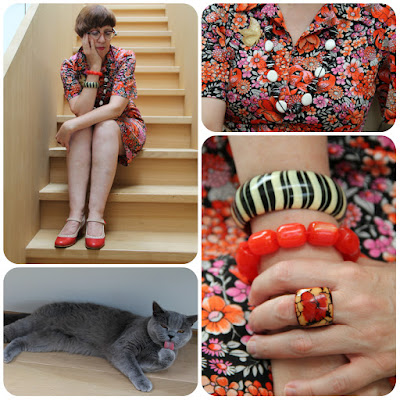 The butterfly brooch I pinned to my dress was feeling quite at home among the profusion of flowers. 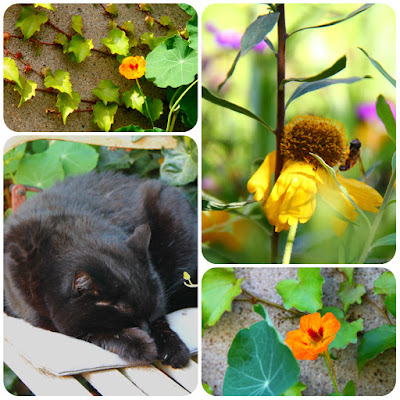 What with all the cats, we almost forgot we have one of our own to keep fed, watered and generally treated like royalty. There's nothing she loves better than snoozing in the garden!

Well, that's it for now. Tales of how we survived the heatwave will be told in my next post.

Until then, keep safe and as sane as possible. And fabulous too, obviously.