Glaciers melting in the dead of night

Our heatwave has finally upped and left, leaving us with much more bearable but still warm enough temperatures in the mid to high twenties range.
In spite of all our efforts, Dove Cottage's upstairs rooms still feel as if we've left the oven door open, and we know from experience that it will take a couple of days at least for things to get back to normal. Until then, there's nothing for it but to bear those sweaty, glacier melting nights!
We were still in the thick of it on Friday before last. With temperatures set to reach 37°C, Code Red weather warnings were issued, advising people to spend the daytime hours in a cool indoor space and keep doors and windows closed to keep out the heat. As usual, not too much exertion and a regular fluid intake were also on the list for surviving the sweltering heat. 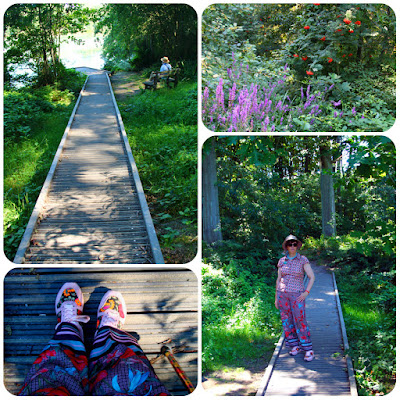 Always contrary and unwilling to face a string of days spent indoors, after breakfast we packed a picnic and drove back to Blaasveldbroek, the nature reserve we only visited on Tuesday.
Those of you who read my previous post might remember that we took a wrong turning somewhere on our way back to the car park, ending up walking along some paths we'd never walked before. It was on one of these paths, not far from a second, smaller car park, that we noticed a boardwalk leading down from the path to a platform at the edge of a pond. We could even make out a bench, but weren't able to go down and investigate as there was someone sitting on it. 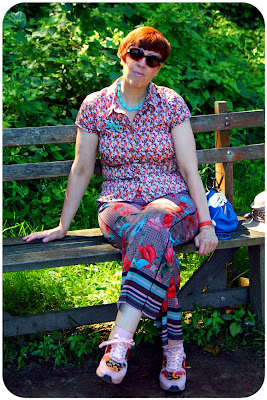 Hoping for a stroke of good luck this early on this baking hot day, we parked our car under the trees in the small car park, and with some trepidation, strolled along the path leading to the boardwalk, all the while keeping our fingers firmly crossed.
There was nobody there, how absolutely divine! We made our way along the boardwalk and sat down on the bench, taking in the view and relishing the fresh and still relatively cool air. The only sounds were the high pitched clucking of a plump of moorhens (had to look up the collective name) and the rhythmic thwoks of an early morning tennis game on one of the courts hidden by the trees somewhere behind us. 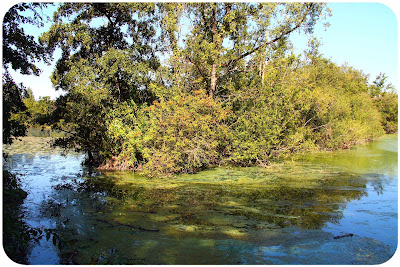 All too soon, the sun's rays pierced through the canopy shading our secluded little oasis, dappling the bench with searing sunlight. We decided to walk into the direction of the visitor's centre, where shady picnic benches would be on offer. 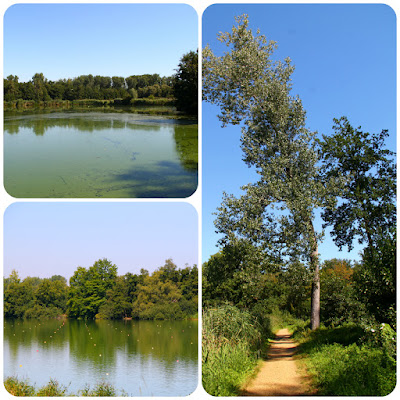 But again, our walk turned out to be longer than intended, taking us along a mixture of sun-baked trails and woodland paths, and along various stretches of water, including Hazewinkel, a well-known rowing course at the edge of the domain (bottom left). 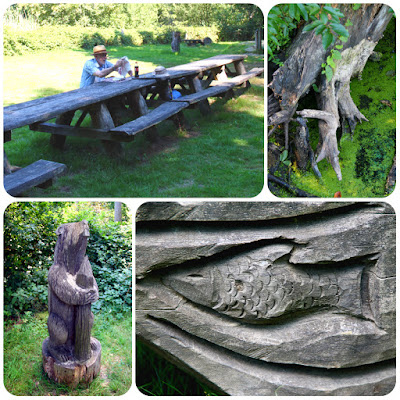 The visitor centre and surrounding picnic area were completely deserted, so that we were spoilt for choice, opting for the long communal picnic table situated on the secluded so-called otter and beaver island.
Afterwards, we trudged back to the car park, making a slight detour to the boardwalk and bench, where we watched dragonflies hovering over the lake in search of a meal. Speaking of the latter, we fortified ourselves for the journey home by eating the waffles we'd brought as dessert. 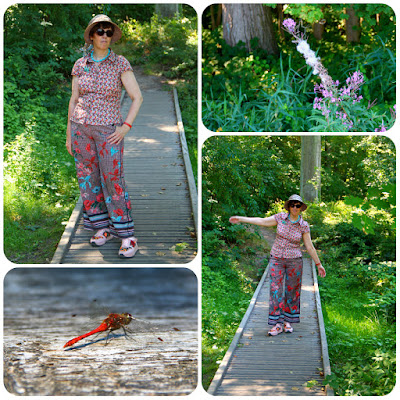 A final view of my outfit, which consisted of the charity shopped Zara trousers I wore on our previous visit, this time accompanied by a printed cotton shirt picked up on a charity shopping trip back in July. 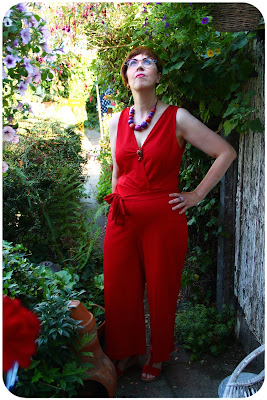 The searing and sultry temperatures continued over the weekend, prompting me to wear clothes I'm only considering on the hottest of days.
Take this jumpsuit, for instance. I'm unashamedly wearing retail here and not even a sales bargain at that. Making a shortcut through Antwerp's walk-through Mango shop, it was love at first sight last Summer. 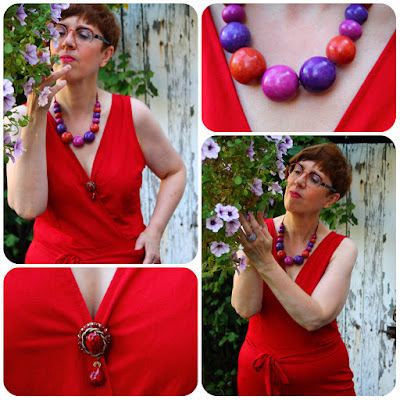 I can report that it was extremely comfortable to wear and didn't cling anywhere. For the sake of modesty, I did pin a brooch to its decolletage. After some trial and error, I found one that fit the bill perfectly! The wooden beads were the only thing I could bear against my skin 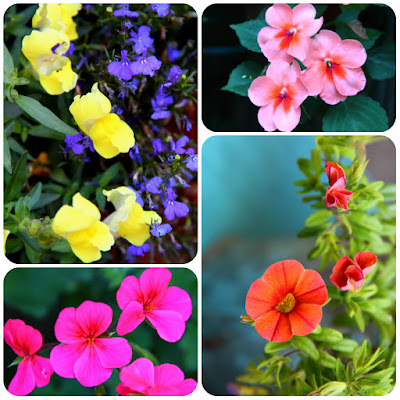 Any gardening is confined to either early morning, when there's still enough shade in the garden to do my deadheading round, or from 9 to 9.30 onwards, for a watering session when the sun has dipped below the horizon.
Hats off to all the annuals who keep going in the face of extreme weather conditions! 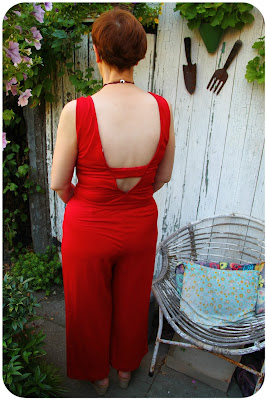 I almost forgot to show you the back of my jumpsuit, which is another reason why I was hardly sweating in it at all! 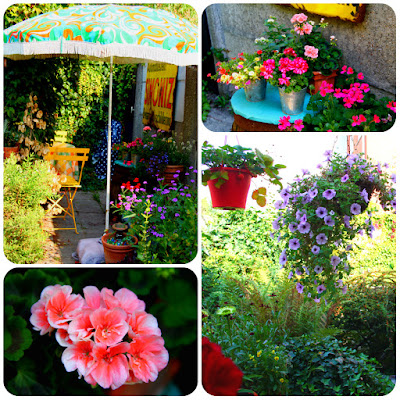 We put up our 1970s parasol - a family heirloom - in our bistro courtyard, even though it's too hot to sit out there. This is mainly for our poor plants' benefit, in order to prevent those residing there burning to a crisp. I even took down the two pots hanging from the brackets of the enamel sign, as keeping them up there would have resulted in their untimely demise. 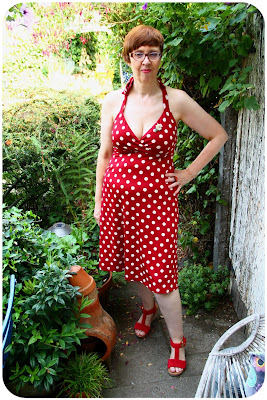 The King Louie halterneck dress I wore on Sunday was another charity shop find, incidentally picked up in the same shop near Bruges as the Zara trousers.
Too hot for accessories, I kept it simple by pinning a vintage daisy brooch to the dress, and briefly wearing a fused glass ring. Shortly after taking the photos, I took it off to yet again wash my hands, and forgot to put it back on.
The red suede Gabor wedges were last Summer's sales bargain. 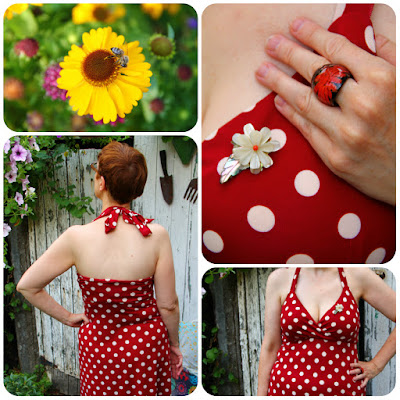 Once again, we mostly took shelter inside, at one point dragging ourselves out of our lethargic states to lug a bag of holiday maps and booklets downstairs.
If all goes well, we will be in our usual cottage in Belgium's west country in two weeks' time. Do keep everything crossed for us please! 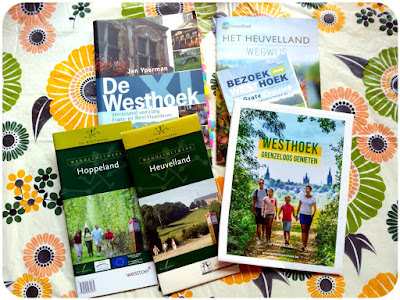 I'm leaving you now with some more garden loveliness, as in spite of it all, and helped with some of our rather sweaty tender loving care, some plants are still thriving.
Our hanging strawberry plant is still treating us to regular berries, while pale pink Malva, lavender Salvia and a happy marriage of Verbena and Rudbeckia stubbornly refuse to succumb to the heat! 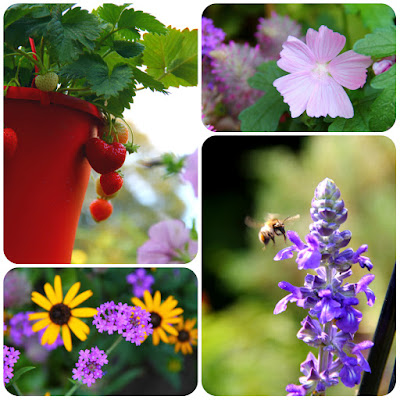 This will be my first post published through the new Blogger interface, so I do hope everything goes well. Wish me luck!
As always, do stay safe, sane and fabulous! Hope to see you again next time!

Posted by Polyester Princess at 15:44