The smell of the warm Summer air

How can it be that we're almost half way through August? Soon Summer will follow Spring into oblivion and, if year after year the swift passing of the seasons tends to take me by surprise, time seems to be speeding by even more relentlessly in this watershed year.

Apart from anything else, the heatwave is playing havoc with my brain, which is doing its very utmost not to melt like the proverbial ice cream left out in the sun.

All my efforts to bottle up at least some of our surplus temperatures and send them off to Walsall have so far come to nothing, so that there was nothing for it but to grin and bear it. 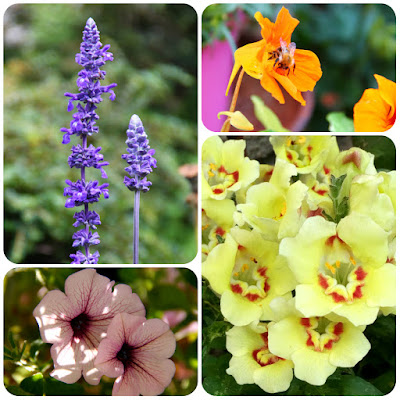 Last week started bright and sunny, with the temperature not climbing higher than a balmy 25°C on Monday.

Watering the patio plants after work, I thought I 'd show you some of our garden stalwarts, which have been going strong for months. The bee-magnet purple Salvia spikes keep flowering as if there's no tomorrow, as do the various Nasturtiums and the pink-veined Petunias in one of our hanging baskets. The pale yellow, maroon hearted Antirrhinum (bottom right) is in its second flush of flowers after I cut them back after the first. Aren't they delightful? 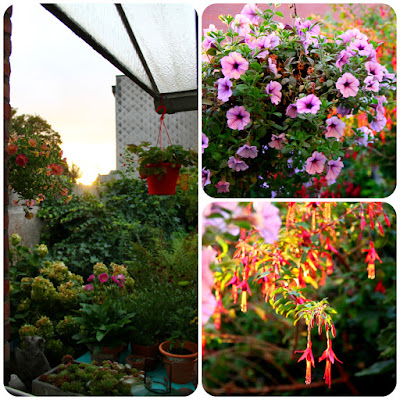 Sunset was magnificent that night, with the sun a blindingly bright and golden-hued ball slowly sinking below the horizon, and coating the garden, and in particular the Fuchsia magellanica ballerinas, in its golden syrup glow.

Tuesday was another sun-drenched day, with the temperature warming up towards the high twenties. With the heatwave warnings plastered all over the news - a welcome change to you-know-what - we thought we'd better make the most of this day and go for a walk before all hell broke loose. 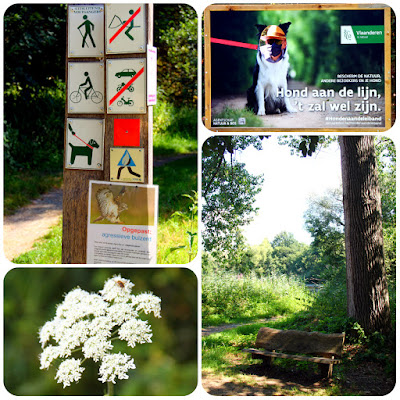 Our chosen destination was our favourite nature reserve, Blaasveldbroek, a magical all-seasons place I've taken you to several times over the years. We used our car's built-in Satnav for the first time for this trip. She seems to be more accurate than our other one, the quarrelsome Marie-Jeanne, but she's got the most irritating computer voice, so the jury's still out.

Our walk, which we began from the main car park, initially had a false start, as the path we intended to take was closed, with a sign warning to beware of aggressive buzzards. Apparently, a couple was nesting there, who were fiercely defending their territory and had already attacked several joggers.

Instead, we took the path leading straight from the main entrance, which had a big billboard reminding you to put your dog on the lead. The eagle-eyed among you might spot Jos's masked face in the dog-faced opening! 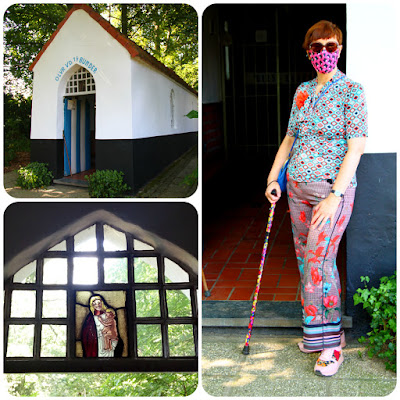 This path soon passes an enchanting little whitewashed chapel, with its open blue and white striped door inviting you inside, where candles always seem to be burning at a statue of Our Lady's feet.

Legend has it that the statue was found in the nearby pond in 1636 and that, even in the harshest of winters, the spot in which she was found never freezes over.

At that point, we removed our masks, which are mandatory whenever we venture out in public, only putting them back on briefly whenever we met other people, who were mostly doing the same.

As a footnote, things have changed yet again yesterday, with masks now only being required in busy places. Makes sense, doesn't it? 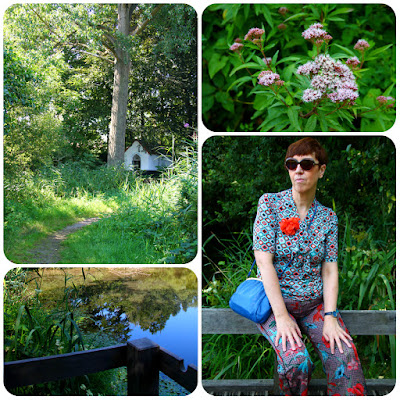 As a direct result of all the mask wearing, I hardly ever seem to wear lipstick anymore, which I think makes me look quite pale and colourless. I miss wearing lipstick!

We sat for a while at the edge of the pond, with a lovely view of the chapel half hidden away between the trees, listening to the welcome sound of silence and breathing in the intoxicating Summer scents.

The wide-legged trousers I'm wearing are Zara, and a lucky find in a charity shop near Bruges. The groovily patterned pussy-bow blouse is an old retail buy and matches the trousers' colours so perfectly that I often seem to be wearing them together. 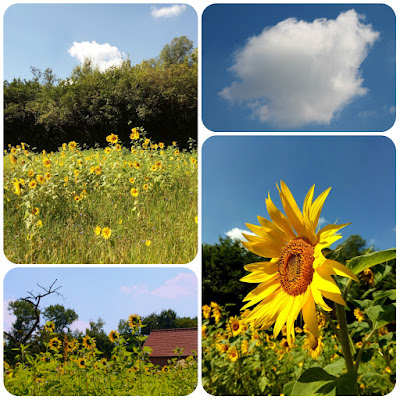 There's a visitor centre at the heart of the domain, with a sprinkling of picnic tables, which is where we were headed.

We were delighted to see a field of sunflowers edged with cornflowers and poppies, planted to provide a fast food restaurant for insects. Obviously, the sunflowers were the showstoppers here and looked particularly striking with the blue sky as a backdrop. 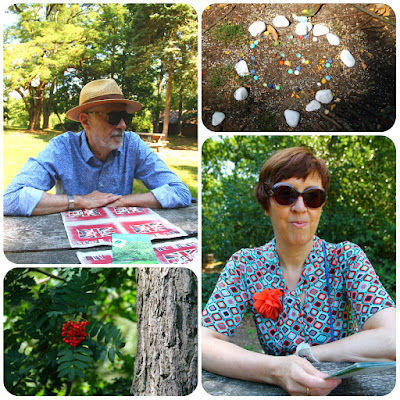 There was only a handful of people around and we found a quiet and shady table under the trees where we hungrily devoured the sandwiches we'd brought.

Behind the picnic tables dotted in this wooded area is an imaginative playground, which includes some oversized musical instruments. Surely these are meant for kids of all ages! 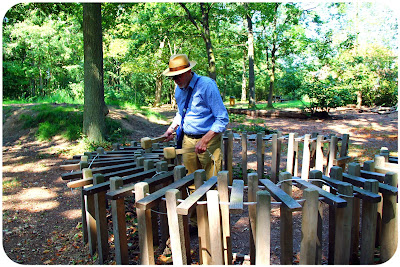 Attempting to make our walk circular, we continued along a path we thought we'd taken many times before. This would eventually skirt some of the domain's ponds and, after a right turn, take us back to the main path.

Well, that was the plan anyway! 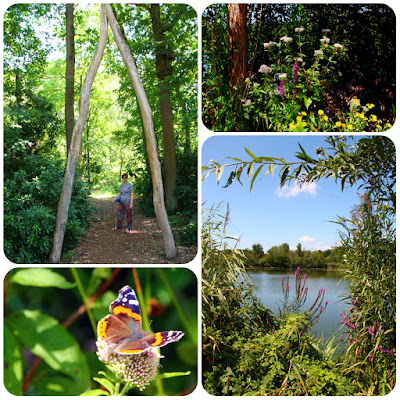 After a while, though, Jos said he thought we'd never been that way before, as he didn't recognize the ponds we walked between. I was still adamant we would end up where I thought we would, and told him it only looked different as we usually walked here in the opposite direction. 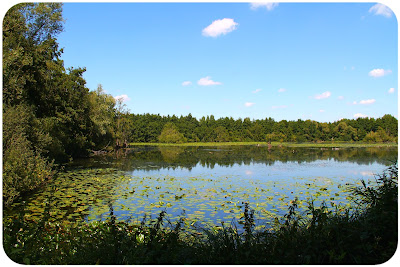 Turned out Jos was right after all, although neither of us could put a finger on what went wrong.

Eventually, we started recognizing some of the landmarks and found ourselves finally back on track. 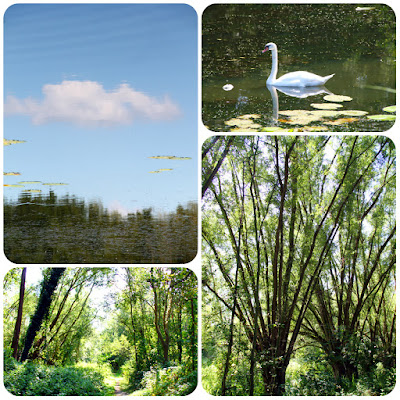 We still did a circuit, albeit a longer one than initially intended, and discovered some delightful new paths along the way. We would, in fact, be back there sooner than we thought! 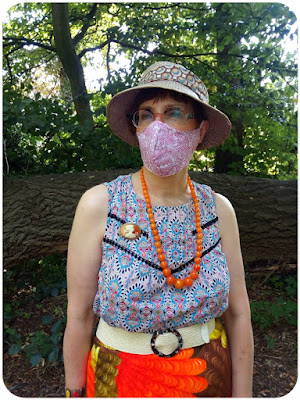 Not the next day, though, which was another one of my office days.

The heatwave was now in full flow, the temperature easily reaching the 30° C mark by the end of the day and continuing to go up on Thursday.

At such temperatures, by late morning the heat trapped within the walls of our tiny 4,5 x 10,5 meter garden becomes quite stifling, so that, until the sun goes down, it is a no-go area for non-lizards like us. 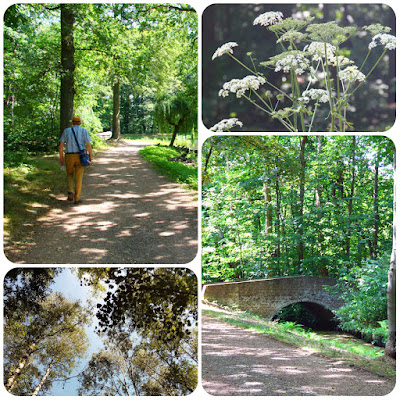 After Jos had done the food shopping, we quickly slapped a couple of sandwiches together and hopped into our car for a picnic in the shady municipal park of Boom.

Here, we did some more of the courtesy mask wearing and went in search of a rather elusive shady bench. 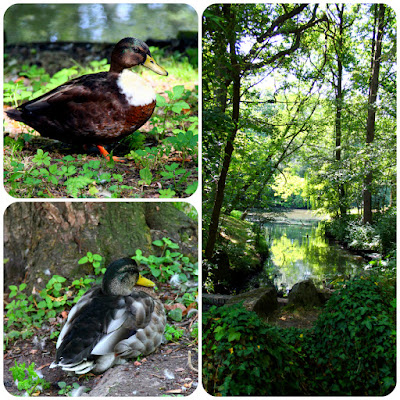 I quite pity the ducks who live here, as most of the ditch leading up to the main ponds was dry, with the water in the latter a murky green. Most of them seemed to prefer dozing on the edge anyway. 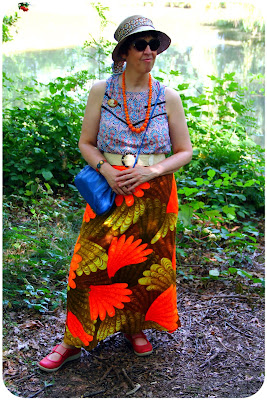 I was wearing my all-time favourite maxi skirt, all glorious curtain couture, and picked up at Think Twice in June 2019. There's not much of a colour match with the cotton top, a UK charity shop find last year, but it looked and felt right the minute I put the two together.

The omnipresent stretchy belt was making another appearance, as did the blue bag, which is just big enough for essentials, now of course including face mask and hand sanitizer. 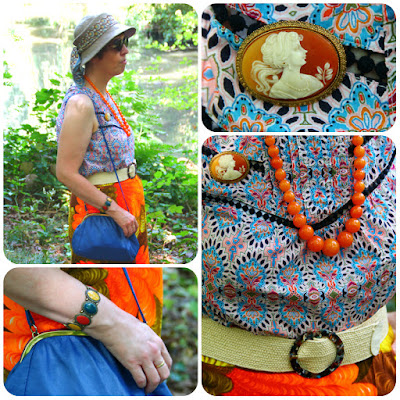 I picked up the orange in the skirt by wearing an orange beaded necklace and pinning a cameo brooch on a burnt orange background to my top.

The multi-coloured bracelet was a last minute addition, while my heatwave outfit was completed by my scarf-wrapped sunhat and sunglasses.

After our circuit of the park, we drove home, where we crashed in our darkened sitting room. At one point, I even fell asleep on the couch, which is quite an unheard of occurrence.

As is watering the plants at 9.30 after the sun has gone. It's quite dark by the time I've finished, so the days are definitely getting shorter. Which neatly takes me back to the beginning of this post!

Until next time, do stay safe, sane and positive, my dears!