I'm currently counting down the days (10 to go at the time of publishing) to our little holiday in Belgium's west country. We'll be staying in our usual little thatched cottage overlooking a picturesque private lake and I'm keeping my spirits up by imagining sitting on the cottage's terrace and enjoying the view over the fields towards the hills on the French border in the distance.

I'm fully aware that things might be just a little different from our previous eight (!) visits, but I expect that being able to escape the rut I seem to be in lately and having a well-needed change of scenery, will be balm for the soul nonetheless.

But I'm getting ahead of myself, so let's pick up where I left you in my previous post, which was smack dab in the middle of the mother of all heatwaves! 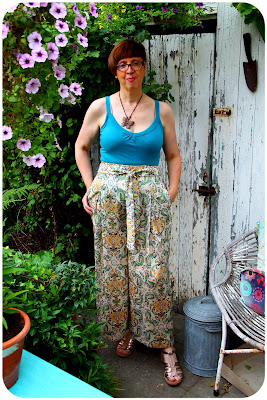 Temperatures were expected to come down from their great heights in the days following the weekend before last. Or at least, that's what those bothersome weathermen had us believe. But no, the mercury still gleefully climbed towards the mid-thirties on Monday. To say I was glad to escape to the coolness of my airconditioned office is quite an understatement.

Sadly, back at home some of our plants didn't cope all too well with the relentless heat. So, it's goodbye to the Iceland poppies, which have literally burnt to a crisp, while the glossy dark burgundy leaves of our Heuchera "Black Sea" have definitely lost their original colour and sheen. 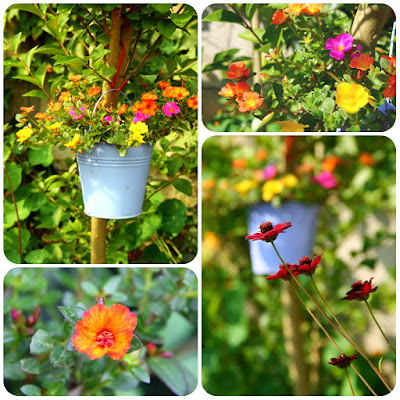 Then there are those plants which seem to thrive in hot weather. Take our Portulaca, which is living happily in its lilac tin bucket suspended from one of the branches of our rampant privet. It is a small, succulent annual with fleshy foliage and colourful blooms that vary in colour, from yellows and tangerines to hot pinks and reds. The tiny flowers close when the sun goes down, but every morning they greet the day again with their cheerful little faces.

On the bottom right, you can catch a blurred glimpse of them behind the chocolate scented flowers of Cosmos atrosanguineus. Another hot weather lover, these are just starting to dwindle after having flowered profusely for months. 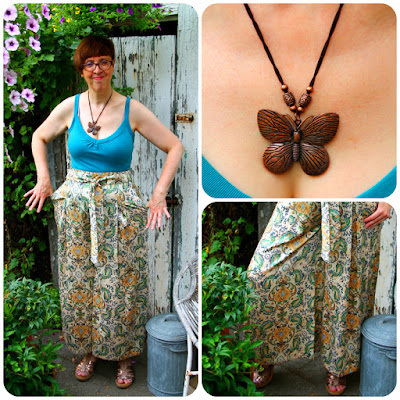 Yes, alright, I can hear you thinking, but what about your outfit? And are you wearing trousers again? Well, yes I am, and what's more, I bought them in the sales during lunch break on Monday. They're from the same Mango shop where I'd bought the red jumpsuit last year, and I knew resistance was futile as soon as I clapped eyes on them.

Not only do they look fabulous, with their Paisley-esque yellow, green and turquoise print on a creamy background, they are easily the most comfortable trousers I've ever worn. Plus, they have pockets! 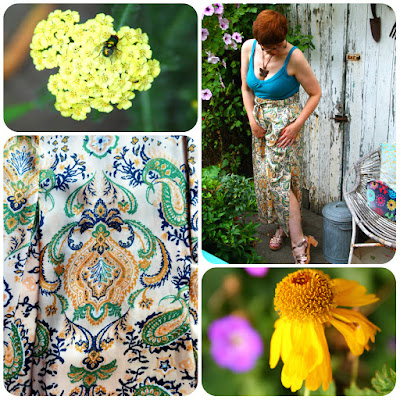 They also have huge slits on the side of each wide leg, offering sufficient ventilation on a hot day.

Of course, I had to wear them immediatly on Tuesday. I've had the teal H&M top I was wearing with it for eons. Admittedly, I'd forgotten all about it until I recently found it tucked away at the back of a drawer. The butterfly pendant was among the charity shop jewellery haul of a couple of weeks ago. 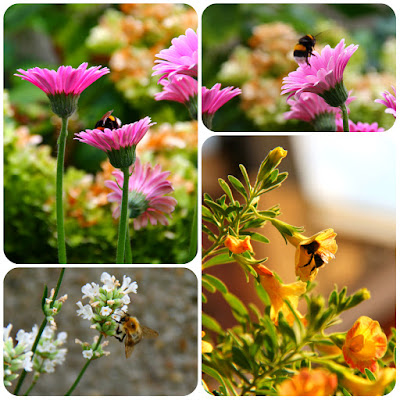 Being another 30 degrees plus scorcher, I started the day with some early morning gardening accompanied by the busy bees taking full advantage of our garden's spoils.

As Jos was in need of a pair of shorts, we tried our luck at the local C&A shop, where fortunately we found what we were looking for. Then, after lunch, I caught up with blog comments and continued making holiday plans.

I also sorted my growing collection of face masks which at the latest count number more than twenty! 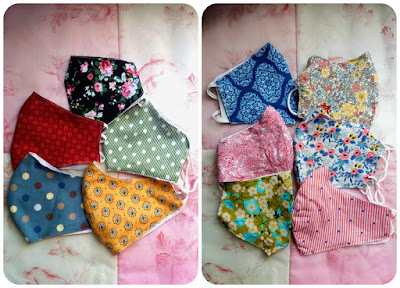 I recently found a little shop around the corner from my office selling a huge selection of cheerfully printed cotton ones, so I admit I went a bit crazy. The nice girl at the till even offered me a reduction! She was admiring the curtain couture skirt I was wearing and we ended up talking about second hand shopping as well as venting our thoughts and frustrations on the current C-word situation and its do's and don'ts. I left the shop a much happier person!

These are some of the masks I bought, minus those which are currently in the wash and those which Jos has claimed for himself.

As they needed a home of their own, I offered them this small pink polka-dot suitcase, which I think is most suitable! 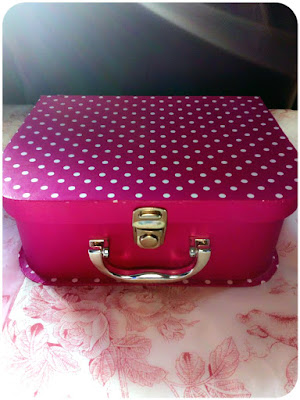 That evening, we were regaled by a thunderstorm and heavy rain, which unfortunately only cooled down things slightly and very briefly. It did mean only having to water a couple of pots under the awning, though.

Jos, who is even less heat resistant than me, couldn't resist nipping out into the garden in his pyjama bottoms and offer his thanks to the rain gods!
And all the while, the sun kept on doing its daily descent, shining like a fiery ball between the trees, with the rain pouring down in buckets. 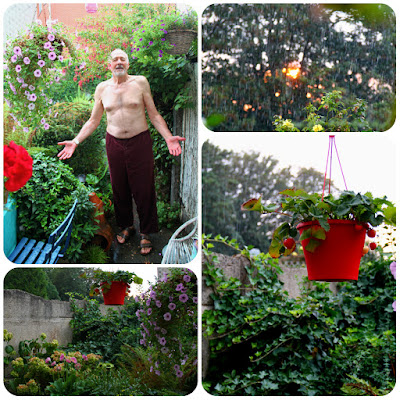 There was still no escaping the heat on Wednesday before last, except for at the office with its deliciously cooling bur rather noisy airco.

Promises, promises! It should have been relatively cooler that day, but the temperatures still hovered around the mid-thirties. That afternoon, I had a long talk with my lovely boss, during which we agreed to continue with the temporary part-time unemployment after the initial end date of 31 August which, in all honesty, I'm finding quite a relief. 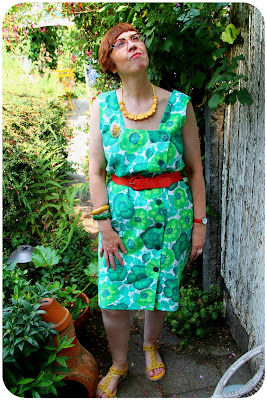 Thursday was a very clammy and stifling day, again with temperatures of well over 30° Celsius.
By mid-morning I was already sweating profusely, in spite of wearing this cool cotton piqué Summer dress. A € 2 flea market find back in April 2018, I had to use my very limited sewing skills and move the already asymmetrically closing buttons a bit, as initially it was a bit too big on top. 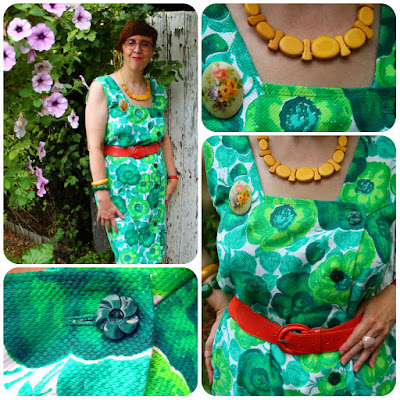 I just love its blowsy green flower print and bottle green flower-shaped buttons, which is why I grabbed it from that flea market rail without giving it any further thought.

Its companions that day were an orange half-elasticated belt, one of the recently charity shopped Les Cordes necklaces, a floral brooch and yellow and green bangles. 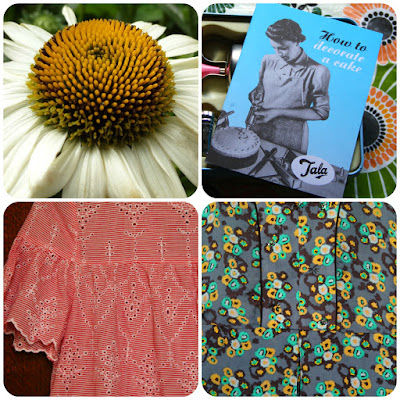 A slightly cooler day on Friday, the temperatures finally dropping into the high twenties.
After our usual fruit and yoghurt breakfast, we decided to throw caution to the wind and drive down to the local charity shop. What with the latest restrictions which only allowed solo shopping, we hadn't been to any charity shops for weeks. I'll show you the things we found properly in my next post, but here's a little taster.
The Echinacea "White Meditation" was brought back from the garden centre, which we visited afterwards. 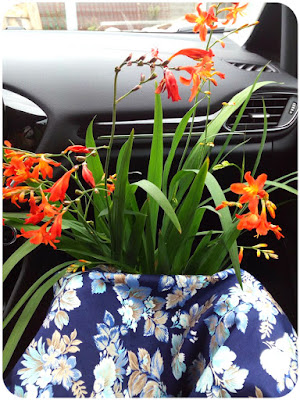 After much deliberation, I gave in and finally bought a Crocosmia. This one is called "Carmine Brilliant" and as it didn't fit into the booth of our car, it shared the passenger seat with me! 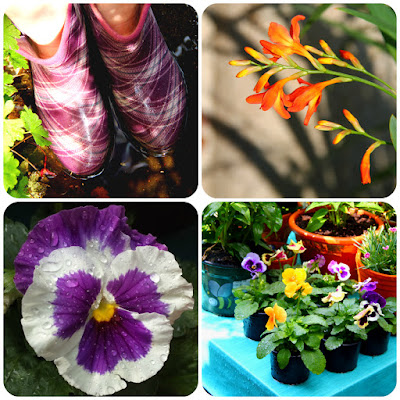 It started pelting down as soon as we got home, turning our dusty garden path into a minor river. At one point, I needed my ankle booties to wade through the puddles to the end of the garden.
The pots of pansies which had made their way into my shopping trolley were looking a bit sorry for themselves at that point. 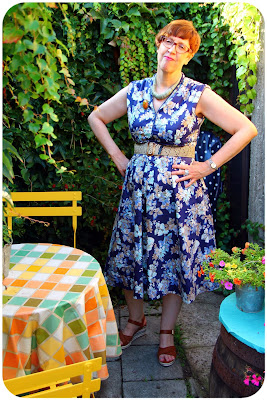 Showers came and went all afternoon, so that once again I was saved the task of watering the majority of the patio plants.
During one of the sun's brief visits, we were able to snap some outfit photos, so that I could show you the wonderful floral dress I was wearing. Instantly evoking holiday memories, it was a gift from Vix when we met up last year, and worn to visit a dream of a garden only days later. 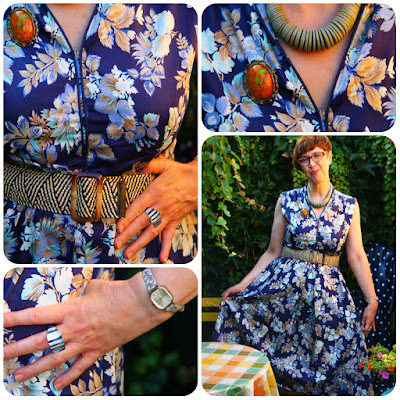 Further holiday memories were provided by my necklace, a charity shop find during last year's west country holiday. The brooch and ring were flea market finds, while the stretchy belt, with its funky triangular pattern and mock tortoiseshell buckle, was a sales bargain back in June.

So, that's it for now. I'll be back with those charity shop finds and more outfits on Sunday.

Until then, keep on keeping safe, my friends!