Before I get off on another one of my ramblings, I would like to report that at the time of writing I'm feeling a whole lot better and the wobbly episode of the last two weeks or so seems to have subsided somewhat.

We are also heading straight into a longish heatwave - I'm wilting already at the mere thought - but that will be for a future post.

For now, I'm taking things up where I left them, which is on Sunday before last. My journal tells me we slept late, until an unheard of 8.30, then had eggs and soldiers for breakfast, after which I washed my hair. Oh, what exciting lives we're leading! 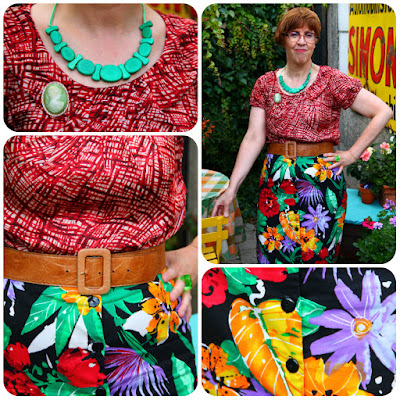 The overnight rain had left a somewhat cooler day in its wake, but it was still warm enough to wear short sleeves for most of the day.

I bought the top I'm wearing in a charity shop during last year's UK holiday. It's from the Betty Jackson Black label for Debenhams and although it's 100% polyester, it has a cool, silky feel.

I combined it with two of my post-lockdown charity shop finds, an exotic flower printed C&A button through skirt, and one of the Les Cordes necklaces I picked up during our most recent trawl. 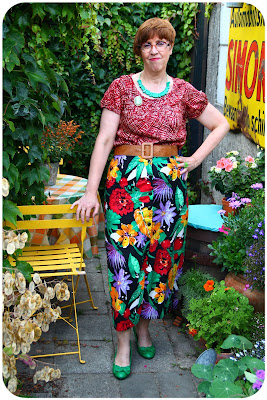 The belt was charity shopped as well, while the green-backed Cameo brooch was a flea market find. In fact, only the green shoes aren't second-hand. They are an old retail buy from a local shop.

For once, there wasn't much forward thinking involved in my outfit, it all came together quite naturally, and it was definitely an A+ in the feel-good category!

Among the silver pennies in our honesty, which you can see on the bottom left of the outfit photo, a handful of new, tiny purple flowers have appeared out of nowhere (top left), while the bees keep flocking to the Chocolate Cosmos still flowering prolifically in its pot. 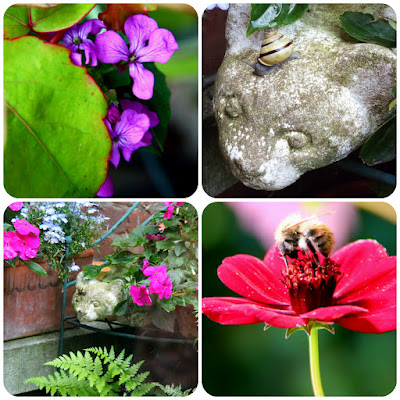 While having breakfast, I noticed a stripy little snail going for a slide on our stone cat's head, making its way towards the poor thing's eye. Of course, I just had to nip outside to take some snaps!

The rest of the day was spent doing some lazy pottering and going through the contents of yet another sitting room cupboard. Nothing even remotely exciting to show you, so instead I'll treat you to some more of the art which is dotted around Dove Cottage.

The common factor here is that these were all charity shop or flea market finds. 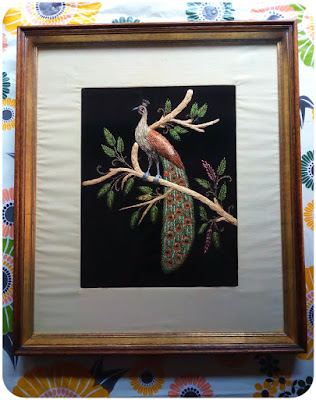 We had to take this framed 3D embroidery of a peacock from the wall to photograph it properly. In its daily life it resides in a dark corner of our dining room, where it is illuminated by an uplighter lamp in the evenings. Being a fan of all things peacock, it caught my eye in a charity shop several years ago. 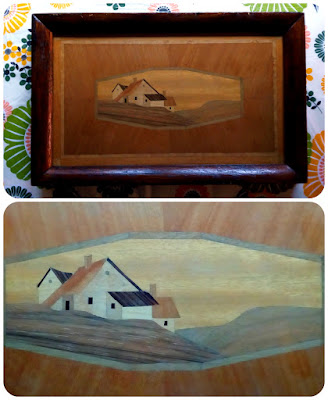 On the opposite side of the dining room is another uplighted piece which we had to take down for photographs. Another charity shop find, this stark image of a desolate house among gently rolling hills is entirely composed of wood inlay. 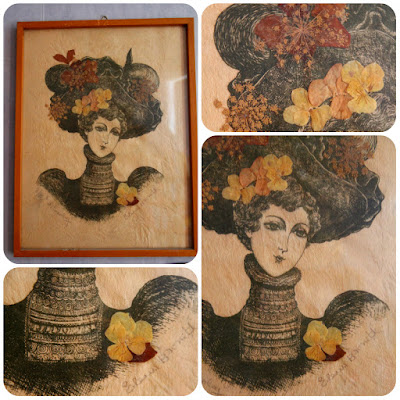 Upstairs, among the wall of heads in our spare room, is this magnificent drawing of an ornately  dressed and hatted lady. Found at an otherwise disappointing flea market, the work contains several dried flowers, particularly adorning the lady's outrageous hat! 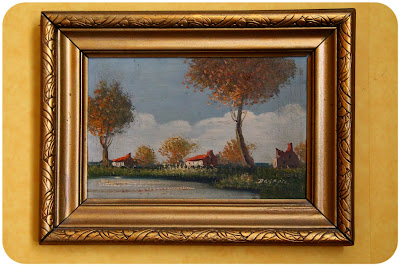 I fel in love with the colours and the timelessness of the landscape in this painting when I laid eyes on it in a charity shop many years ago. It is a real painting, not a print, and it is taking pride of place in our bedroom. 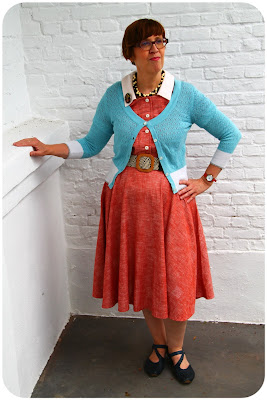 Monday was a moderately busy day at the office, during which I kept checking the news to find out what the National Security Council, which had been in meeting since 8.30 that morning, had in store for us. As I already told you all about that in a previous post, I'm fast forwarding to Tuesday and, in particular, to what I was wearing.

I have reason to believe that this pinkish red textured cotton dress was handmade. With its short sleeves, wide skirt, solid white cotton collar and cuffs and row of white buttons at the bodice, it reminds me a bit of a vintage waitress dress. Again, this was an absolute joy to wear. 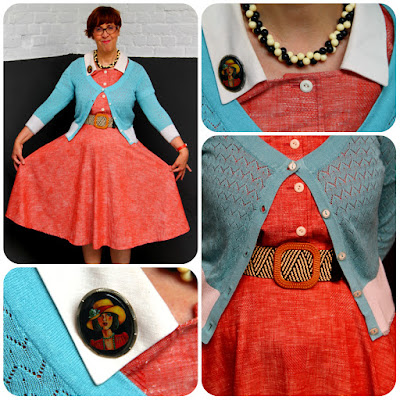 I wore a lightweight baby blue and white openwork cardigan on top, and accessorized the dress with one of my lady brooches pinned to its lapel, a black and white beaded necklace and a stretchy black and white belt with tan plastic buckle. Both the latter and my navy shoes were the only retail items in my outfit.

We'd woken up to grey skies, which alternated with periods of sun throughout the day.

After our usual fruit and yoghurt breakfast, I walked to the chemist and the organic village shop, after which I dusted the hallway and the dining room. I then tied up some straggling Clematis shoots and gave the Astilbe we'd planted and which wasn’t looking too fresh, an extra watering. 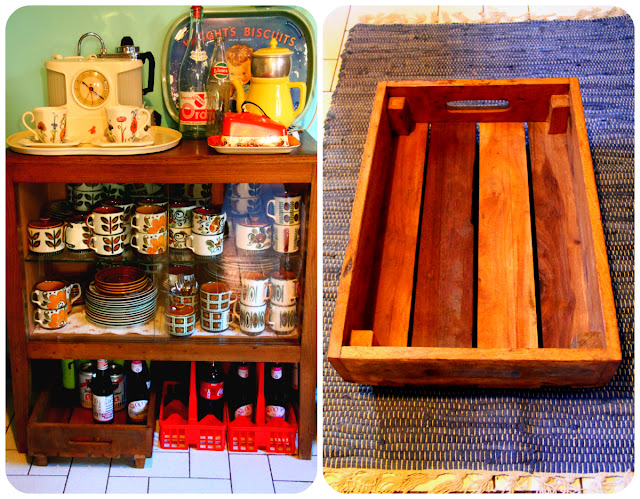 In the afternoon, we drove down to the garden centre, as we needed more bread mix. We also had a € 35 voucher to spend courtesy of our loyalty card so, as this would be be last time we'd be able to go in together, we wanted to have a look at some shallow wooden crates we'd spotted on a previous visit.

For years, we had been storing our supply of drinks under the high-legged China cabinet in our kitchen and although we had been using two vintage plastic bottle carriers for some of the bottles, the rest was all jumbled together willy-nilly, which was both impractical and unsightly.

Aided by the voucher, we bought two of the crates, but after we got them home it turned out that, as I'd feared, the 33 cl beer bottles were too tall to fit underneath the cabinet, so that we were only able to use one of them. The second crate is now awaiting a new purpose. 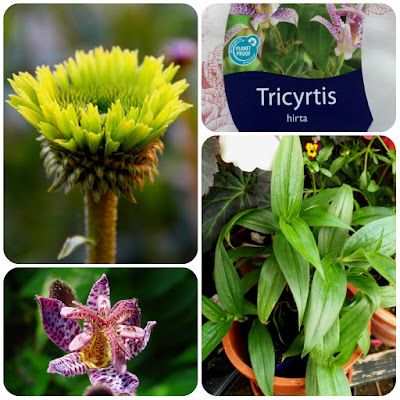 We also bought an Asplenium for the hallway, as well as two more garden plants: an Echinacea 'Green Jewel' and a Tricyrtis hirta, which is better known under the delightful name of Toad Lily. We used to have one of these in our garden before the Big Neglect, and I was overjoyed to find another one, even if it still has to flower. The photo on the bottom left is of the one which lived in our garden sixteen years ago. 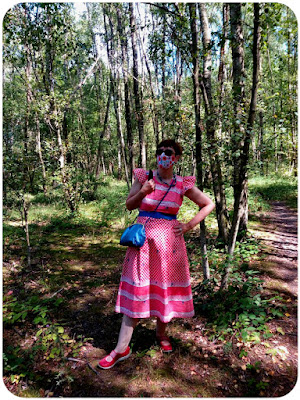 As I had a hairdressers appointment for a colour and cut at 8.30 on Wednesday, I went into work quite a bit earlier so that I could check my mails before I had to leave.

Apart from that, the rest of the day was quite uneventful. As people are actively discouraged to come to Antwerp, it was a lot less crowded on the streets when I left the office to go to the pick-up point after work. At one point, I was the only person walking along a traffic-free stretch, where I usually have to slalom between hordes of shoppers. 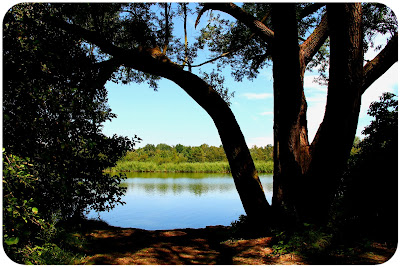 Thursday was a sizzling Summer's day, with temperatures soaring to about 28°C, so once again we drove down to De Walenhoek, the nature reserve in Niel where we'd been for a walk the previous week. With mask wearing now compulsory in public, we wore ours until we were well away from the car park, keeping them at the ready for when we met other people.

We started our walk from a different car park, where a path soon descended towards this blue lagoon of a lake which we could see shimmering between the trees. 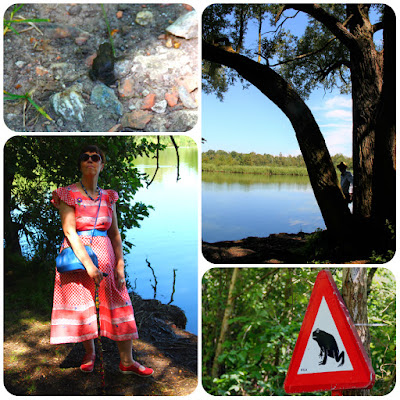 I'd just photographed the frog traffic sign when Jos suddenly pointed to a tiny black frog - much smaller than the one on the sign - crossing the path. Not the sharpest of images as the little creature had the annoying habit of hopping away just as I was clicking the shutter!

This episode made me think of a similar sign we met in Pembrokeshire, which had another, handmade sign next to it showing the real size of the frogs. 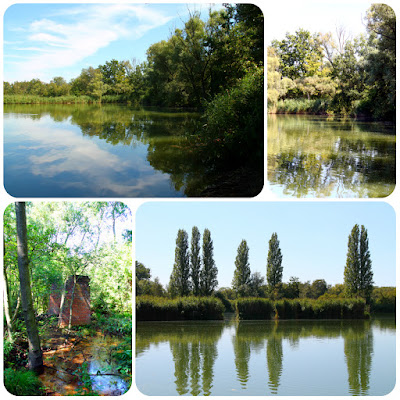 Again, we meandered between the ponds, eventually ending up where we'd walked the other week. Making our way back to the car park, we once again came upon some relics from the past, when the area was a hive of brick-making activity. Now, the quietness was only pierced by bird calls and the buzzing of insects. Oh, and the rhythmic tick-tock sound made by my walking stick. 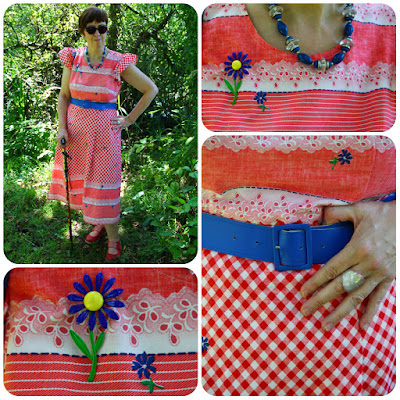 Before I bid you goodbye once more, here's a look at my outfit.

This dress, handmade in a sturdy but cool cotton, is a masterpiece in illusion. What at first sight looks like strips of broderie anglaise is in fact just part of the print, which also features stripes, checks and tiny yellow-hearted blue flowers. The frilly cap sleeves were perfect to protect my shoulders from the sun.

Picking a brooch obviously was a no-brainer! I added more blue in the form of my belt and beaded necklace. The latter also has opalescent white beads, which in their turn match the ring I'm wearing.

I'll be taking you along on another walk in my next post but until then, stay safe, sane and fabulous!