Day in, day out

It never ceases to amaze me how time flies, even in these precarious times, when everything's out of kilter, and nothing is as it was. This would be the time for the first of the outdoor flea markets but I don't miss them as much as I thought I would. Also, at this time of year, the countdown to our UK holiday would have started and I would already have been stressing about packing. This is a much harder nut to crack, but I'm not allowing my mind to dwell on it too much, saving my energy for the ongoing home and garden projects here at Dove Cottage.

As I already mentioned in my previous post, Thursday before last was a bit of a meh day. It took until the early afternoon before I could even bring myself to do anything useful and, as I'd had more than enough of attacking the kitchen with my cleaning cloth, I decided to make a final effort and finish it there and then. 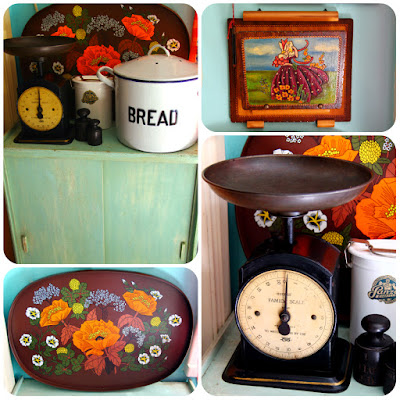 Opposite the big kitchen cupboard is an equally big window and wedged in between the latter and the doorway to our dining room is a tiny cupboard with sliding doors. To my slightly colourblind eyes - I have problems differentiating between certain shades of blue and green - it is blue and always has been, but I'm being told that to some eyes, it might very well be veering towards green.

Whatever its colour, it started life as a doll wardrobe made by my Dad as a Sinterklaas present for a 3-year-old me. There was a little bed as well but that's no longer with us. The wardrobe was passed on to my sister, who then passed it on to her daughter, and it was only by pure coincidence that we were able to save it from ending its life at the dump.

It now holds a myriad of smaller kitchen necessities, while providing yet another surface for displaying kitchenalia, such as a 1970s melamine tray, antique kitchen scales and weights and a well-used bread bin. 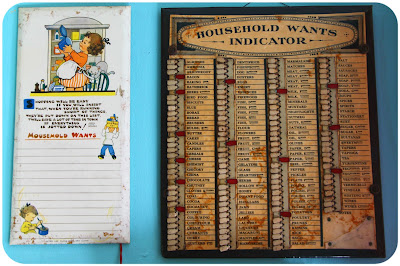 The larger one on the right was found in an antiques shop in Lewes, East Sussex in 2005, and dates from the 1920s to 1930s, while the smaller one is a 1930s Lucie Mabel Attwell designed wipe clean one complete with its original pencil. This was picked up in Bridgnorth during our penultimate Shropshire holiday in 2018. 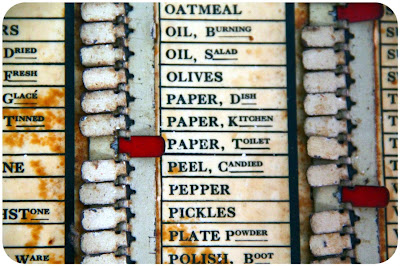 Here's a closer look at the larger one, which basically consists of a shopping list with metal tabs in front of each item. These tabs can be turned to indicate the required items. I've turned the one for the all-important toilet paper as an example!

It seems that in the last couple of years, this particular one has become even more desirable as apparently it features in Downton Abbey's kitchen! 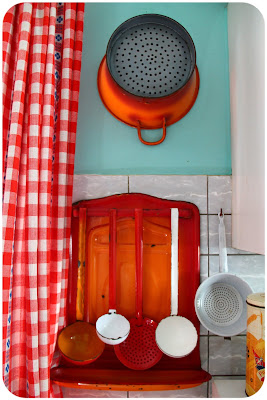 On the other side of our kitchen window, some vintage orange and white enamelware is on display. There's a utensils rack with an assortment of ladles and strainers, and a colander hanging above it.

On to Friday, with sunnier and slightly warmer weather making a return. 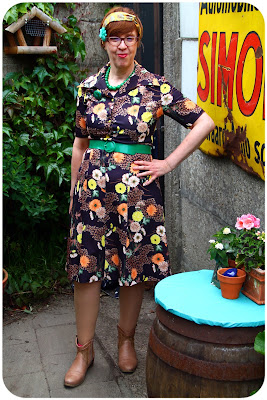 Dipping into my wardrobe, I found this dress winking at me. In a deep chocolate brown with an orange, yellow, green and light brown floral print, it hadn't seen the light of day at all last Summer, as it was a just a tad too snug on the hips. A more healthy lifestyle - and less snacking - has certainly been a positive side to all this, inadvertently nipping inches off my hips and waistline without the need of a diet. 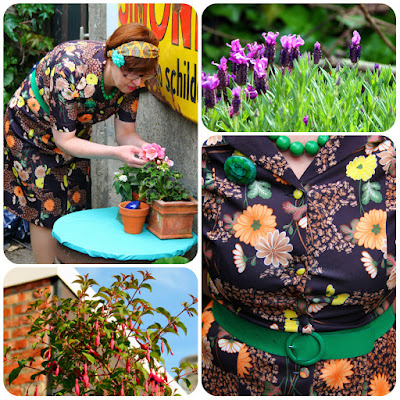 Green was my colour of choice for my accessories, a vinyl round-buckled belt, beaded necklace and  a green floral brooch. I even added a green hair clip to my #Coronahair solution hair band.

Oh, and did I mention my green fingers? I'm so glad I took up gardening again and rediscovered that I actually had them. Especially as green is my favourite colour :-) 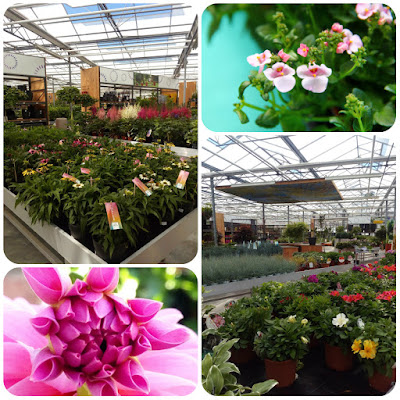 Fridays usually mean a trip to the calm oasis provided by our favourite garden centre. Now that all other shops had re-opened, it was even quieter than usual. Look at all that space, with nobody else in sight, enabling us to browse the well-stocked aisles at ease.

Apart from a few more plants, we bought a bag of garden compost and some solar garden lights to replace our decrepit ancient ones which had long ago run out of steam.

We discovered there is a home-baking department as well, so that we were able to grab some bags of bread mix, which aren't available at our smaller supermarket. 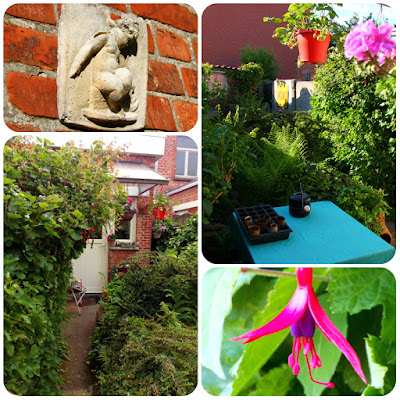 Back at home, Jos took the secateurs to the giant currant bush, giving it a bit of a haircut, so that we can now walk to the bottom of the garden without getting tangled in its branches. He had to sacrifice some of the currants for this, but these would probably have either been damaged by us trying to squeeze past, or been eaten by the local population of wood pigeons.

The upside is that our Fuchsia magellanica now has more room at the top! 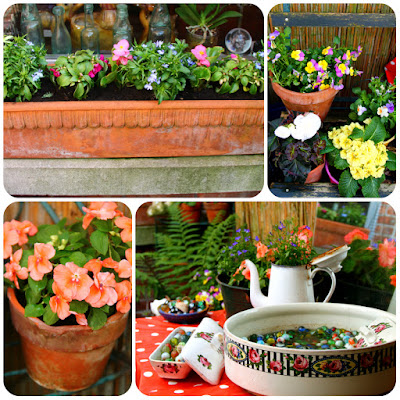 Meanwhile I got busy in the passageway next to our kitchen, replacing the tired looking Primulas and pansies in the window box with Lobelias, Busy Lizzies and Begonias.

I replanted the yellow Primula, which was still in reasonable nick, as well as the leggy pansies, into pots, allowing them to live out the rest of their lives on an old garden chair turned plant table in the passageway.

The rusty enamelled coffee pot in the garden bathroom was planted with a spare Lobelia. 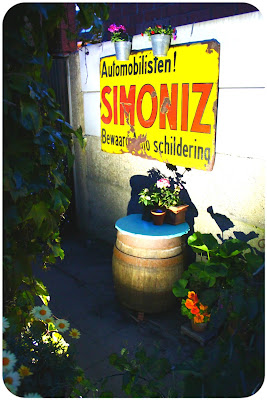 Jos's final job of the day was dotting the garden with the solar lights we'd bought. One of these is a spotlight, which he used to illuminate the enamel sign in the courtyard.

That night, we waited anxiously for darkness to fall, so that we could see the full effect, which was definitely worth waiting for! Can't wait for a balmy evening to sit out there and enjoy our little secret garden. 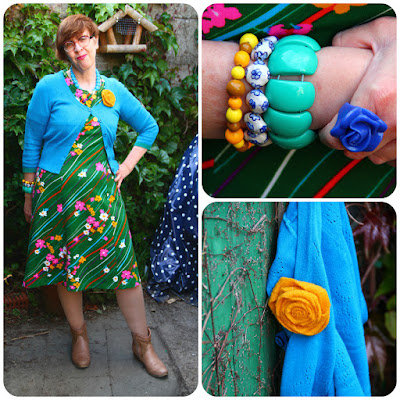 More of the same weather on Saturday before last, sunny but not quite warm enough to go without a cardigan.

My outfit that day was based around one of my Diolen delights, a green dress with a print combining flowers and stripes in a multitude of colours. It was made in France, proudly bearing a Françoise de France label. It's not in the best of conditions, but it was a Think Twice sales bargain and I found its print utterly irresistible.

I added a blue cropped cardigan, its three-quarter sleeves trimmed in green, as well as blue beads and a blue moulded flower ring. A bevy of bracelets and a yellow felted flower pinned to my cardi completed my outfit. 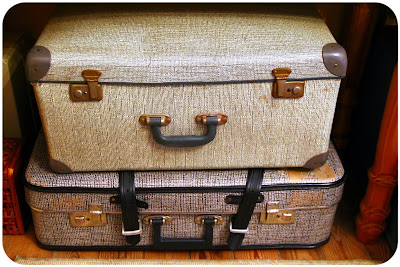 While having a good old rummage upstairs, I made a discovery - or should that be re-discovery - which put a huge smile on my face.

A week or two ago, I got up one morning, determined to wear a particular dress - the top one in the below photo - but I couldn't find it anywhere. I'd already resigned myself to the fact that I'd probably sold it, although I couldn't for the life of me understand why, when I suddenly thought of another dress I was missing: the green and white one in the photo, to be exactly.

After racking my brains as to where it could be hiding, I had the brainwave to open the bottom suitcase in the above photo, which I initially thought only held some coats. Well, what can I say? Not only did I find both dresses, but many more to boot! 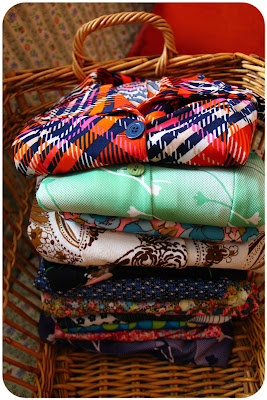 Other things I did that day was clipping Jos's hair again, and make an appointment with my hairdresser for a colour and cut on the 3rd of June. Huzzah!

I did some more work in the garden too, potting up a couple of annuals and adding more perennials to our new border: another Scabious, in a dusky purple, and Erigeron, or Mexican fleabane, which has white daisy flowers blushing with pink while they age. 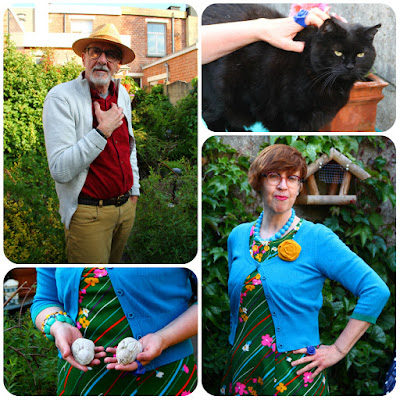 When we were clearing some of the rampant groundcover, we unearthed two tiny stone rabbits I'd forgotten all about. One of them needed a good wash as he had been half buried under some soil and was absolutely filthy, poor thing. I bet they're happy to be reunited. 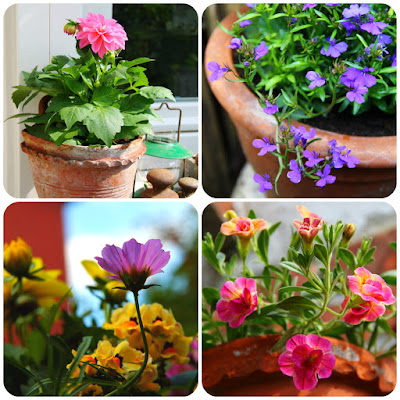 Look at all those cheerful blooms! Clockwise from top left are a candy pink Dahlia, some purplish blue Lobelias, pink cheeked double Million Bells and a symphony of pink Cosmos and yellow Nemesias.

I'd just finished my planting when our neighbour popped his head above the garden wall for a chat, telling us he and his wife were separating - #Coronadivorce - and they were selling the house, which means we'll be getting new neighbours in the near future. Fingers crossed they'll be nice people! 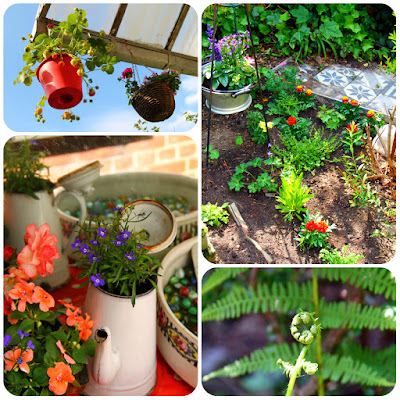 We would be in for warm Summer weather in the week to come - gone again at the time of writing - but that will be for my next post.

Until then, keep on keeping safe, my friends!