Now that the temperature has taken a tumble from its lofty heights, normal service can be resumed and my travelogue can be continued.

Just a little word of explanation, though, before I proceed. The round-up of outfits in my previous post was from the weeks before we were hit by the heatwave. My actual heatwave outfits will feature in a future post and will not contain any polyester or - god forbid! - cardigans and jackets!

But let's pick up where I left off, which was at the end of our first holiday week.

Having made a foray into Wales to visit Powis Castle on Friday, our original plan was to continue to Welshpool, the nearest town of any significance, in the afternoon. However, as we couldn't tear ourselves away from the splendour of the castle's garden, we decided to leave Welshpool for another day. 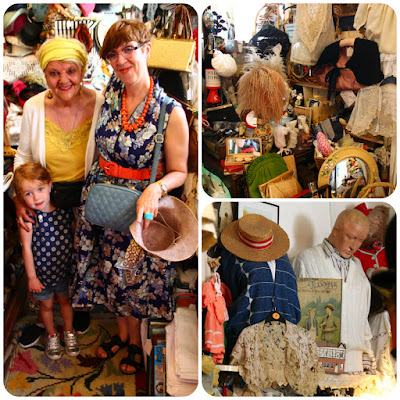 Well, that day came already on Saturday, which turned out to be another glorious summer's day.

But why did we choose to spend it in a town, you might ask? Well, we wanted to pay a return visit to Ashmans Antique and Old Lace, the treasure trove of a vintage shop we'd discovered last year, and as the shop is only open on certain days of the week, our visit couldn't be put off any longer. 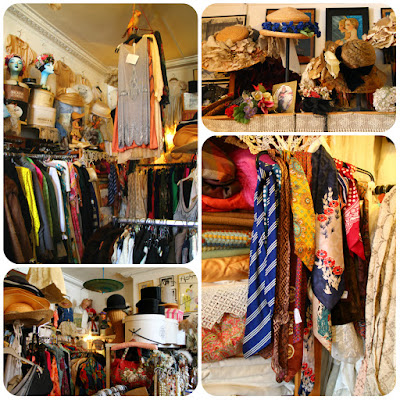 We were chuffed to bits when it turned out that the shop's lovely owner, Diane, recognized and remembered us from last year. And even if this was our second visit and thus we were well prepared for the sight that would greet us, we still felt quite overwhelmed and lacked several pairs of eyes to register all the delectable vintage goodies on display and crammed into every nook and cranny.

While we were browsing, a small girl came into the shop. Her name was Poppy, and she turned out to be daughter of the hairdressers next door. Diane told us she was in there all the time, and frankly speaking, who can blame her? 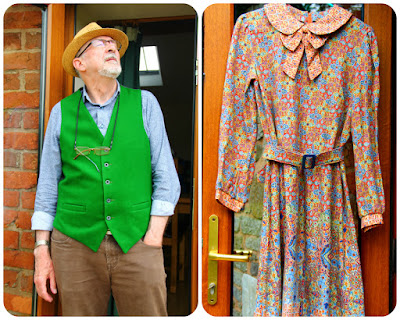 And even though trying things while the temparature was rising was quite a sticky business, there was no way we could have left empty handed.

Jos selected a bright green waistcoat, while I fell head over heels for this Viyalla dress, by which I will remember this dreamy summer's day come winter.

Having made our purchases, Diane gave us both scarves as presents. Aww, isn't she sweet? 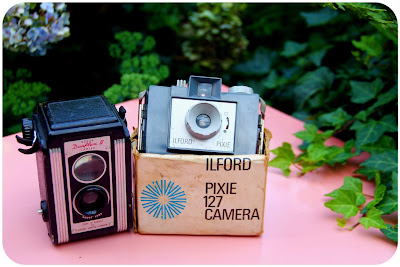 After saying our goodbyes, we walked back along the High Street, where I found a delightful Zara blazer in one of the charity shops, which you will get to see in one of my next posts.

By then it was time for lunch, which we had at a café, after which we walked back to our car. But not before wandering into the indoor market based on the lower level of the Town Hall. There was a stall selling all manner of vintage cameras at small prices, where Jos selected these two for our collection. 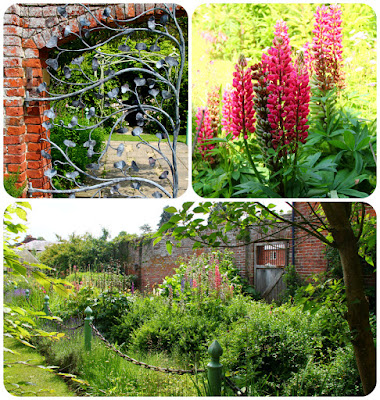 Looking for somewhere to visit in the afternoon, I'd stumbled upon Glansevern Gardens, less than a 10-minute drive from Welshpool.

Romantically positioned on the banks of the River Severn, the gardens offer 25 acres of diverse landscape and imaginitve planting in a beautiful parkland setting with sweeping views over the Kerry Hills and Mid Wales.

Once we'd stepped into the original walled garden through the ornamental Ginkgo gates created by local blacksmith William O'Brien, it became clear that quite by accident we'd discoverd a gem of a secret garden. 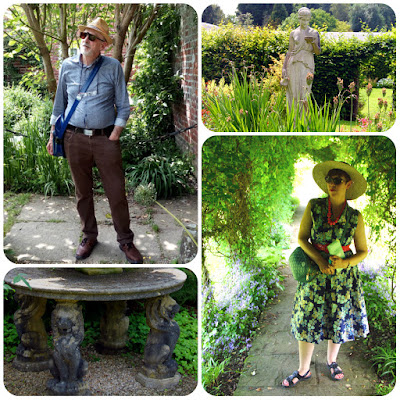 Near the house the gardens are quite formal, with carefully laid out garden beds. There is a Wisteria Walk, a Georgian orangery, lushly planted herbaceous beds and traditional long borders.

The walled gardens are laid out as a series of themed rooms, including a White Garden, Cutting Garden and Rose Garden. 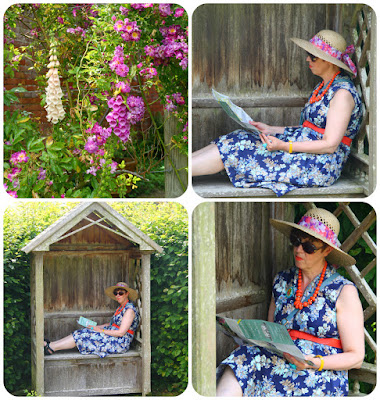 From the walled garden you pass to the Victorian Grotto and Rockery, first laid out in the 1840s, but alas these were currently being restored, so that we will have to pay a return visit next year to see them.

From here, a path leads to the Folly Garden and Wildflower Meadow. With its wildflowers growing among tall grasses and its dappled shade provided by trees, this part of the garden particulary appealed to me. And at every turn there were sculptures to admire or benches to rest upon. 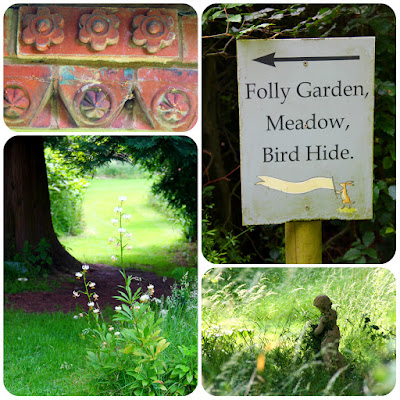 My heart belongs to this kind of garden, where a timeless magic seems to linger, making one's heart leap for joy, and finding peace in its primeval lushness and greenness, before the inevitable draught of high summer kickstarts the irrevocable process of decay. 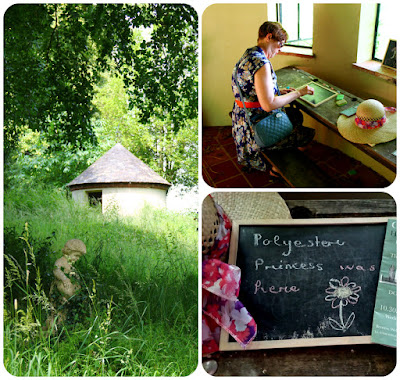 I stepped inside the coolness and tranquility of the folly, indulging my inner child by making use of the chalks and chalkboards provided.

Then we proceeded towards the 5-acre lake, catching glimpses of Glansevern Hall along the way.

The house itself, built by architect Joseph Bromfield for Sir Arthur Davies Owen between 1801 and 1806, and one of the best examples of Greek revival style, cannot be visited. The Owen family was one of the most powerful - and most ancient - families in Wales. 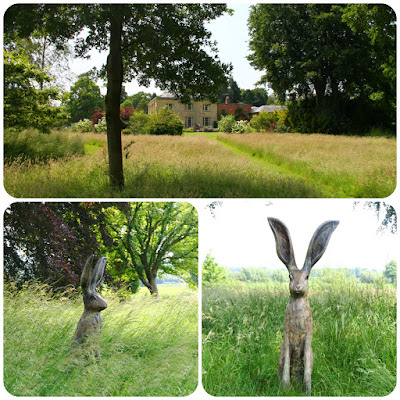 My favourite sculpture was this hare which seems to be framing the distant hills with its ears. How utterly enchanting! This made us both think of the uncanny uncounter with a hare late at night on one of our first days. Glimpsing into the darkened garden before going off to bed, I thought I detected some movement at its far end. When the mysterious creature lifted its head, I could see its enormous ears, prompting me to call out to Jos that there was a giant rabbit in the garden. Then we realized it must have been a hare. Never having met one face to face (so to speak) before, I was quite unprepared for its size. 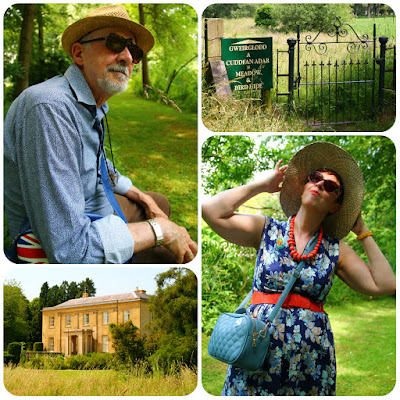 The lake has been called "the biggest bathtub in Wales", and for good reason. When it was dredged and 200 years worth of silt removed, the owners found a huge oak plug at the very bottom, stopping the entrance to an oak drainpipe. The plug measured 18 inches across and was fitted with iron handles. And just like a bathtub plug, when it was removed, the lake did indeed drain. 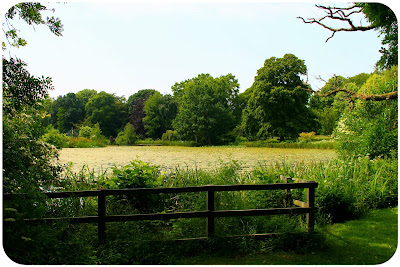 The Lakeside Walk is a delight, meandering through dappled, wooded shade, with plenty of peaceful places to sit and stare. At the end it takes you over an iron footbridge offering splendid views across the lake.

The path then continues through mixed woodland and a water garden planted lushly with a variety of water-loving plants. 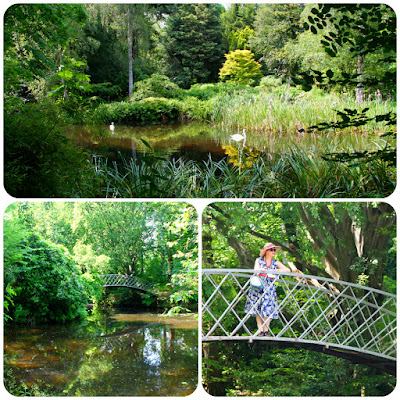 At one point it leads you past the island and its iron gazebo, a haven for visiting waterfowl. There's a boardwalk leading up to the island, but this too was being repaired, offering yet another reason for a return visit. 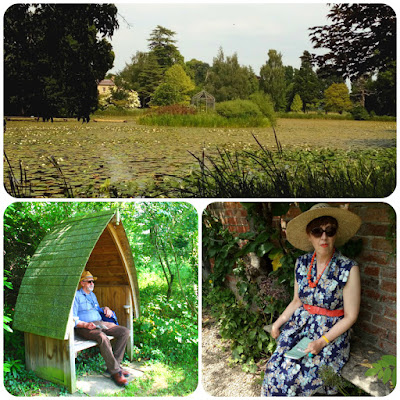 This peaceful and tranquil garden has it all and it's certainly the ideal place to while away time on a warm summer’s day.

At the end of our walk, the Potting Shed Café in the courtyard awaited us with a selection of delectible cakes. We opted for white chocolate filled brownies, which we washed away with the inevitable cappuccinos. 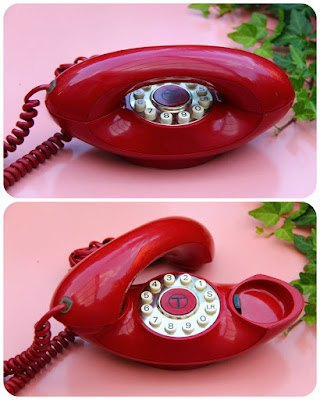 In a shed near the courtyard all manner of bric-a-brac and vintage objects were on sale. We had a chat with the friendly chap who owned the place and told us he'd just opened a matter of weeks before.

The red 1980s design telephone found its way into our hearts and was obtained by us for a very reasonable price. We only realized how reasonable when we spied its rather indescript beige twin being sold for a much higher price in an antique centre in Shrewbury. 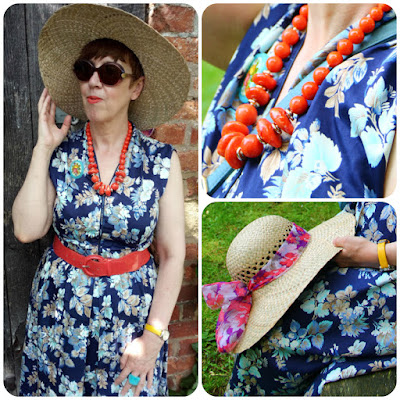 I'll end this post by telling you some more about my outfit.

The eagle-eyed among you might have spotted that this is one of the dresses Vix gave me as a present when we met up. It was the perfect day for wearing it and an utter joy to do so. I combined it with my stretchy orange belt and orange beaded necklace which I'd brought with me.

And isn't the hat delightful? Here I have to admit that it's actually a retail buy. I bought it in the National Trust shop at Powis Castle as I'd stupidly forgotten my hat in the car. But I didn't have a wide brimmed one like this yet. Plus, it will help pay for the upkeep of the property. I know, excuses!

I've got something rather special coming up in my next post, so I hope you'll travel with me again!