Isn't it heartbreaking how time seems to whizz past when you're on holiday?

Getting up at the crack of dawn to start your journey on what is essentially the first day of your  holidays, those two weeks you have been looking forward to seem like an eternity.

All too soon, though, it's time to pack up again and return to the daily grind.

Blogging about it all has the added bonus of re-living your holiday, so let's get this started, shall we? 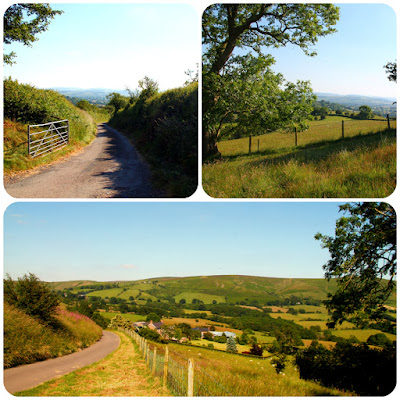 After our long journey, which started at 4.45 am on June 22nd, we arrived in Shropshire by mid afternoon. Our holiday cottage is tucked away in a tiny hamlet nestling in a valley below the Long Mynd mountain range, and is reached by a winding and rather bumpy single track road, 1,2 miles from the nearest two-lane one and just over a mile from the nearest village.

We were delighted to have the sun with us as we'd been hearing tales of torrential rains and floods in the weeks before our departure. We'd even driven through a partially flooded road on our way up. 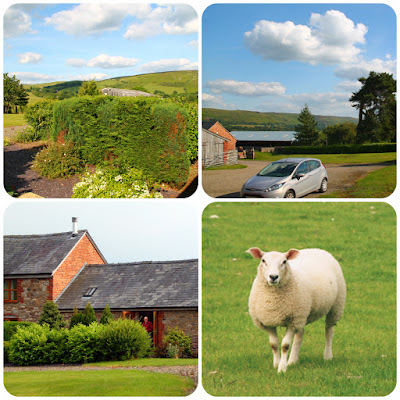 The cottage, formerly a cowshed, is part of a working sheep farm and apart from the hypnotizing soundtrack provided by the bleating of sheep, the chirping of birds and the buzzing of insects, it is peacefully quiet.

The view is magnificent too, with a different part of the Long Mynd visible from each window. 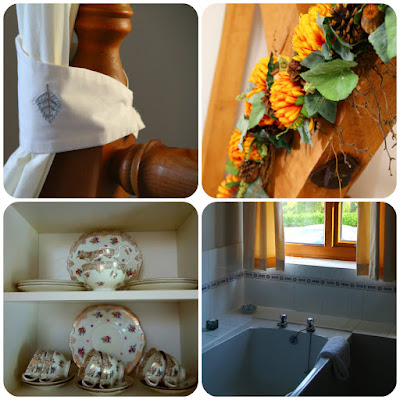 We'd booked the same cottage as last year, so we knew what to expect. Still, it was a nice surprise to find most of the cottage redecorated, making it even lovelier than before. 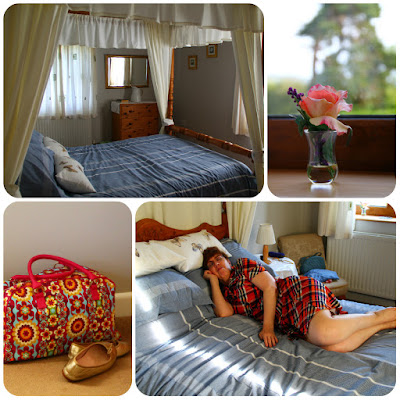 After the initial excitement of our arrival, it was time to wind down and have a nap, as we were quite exhausted by then. 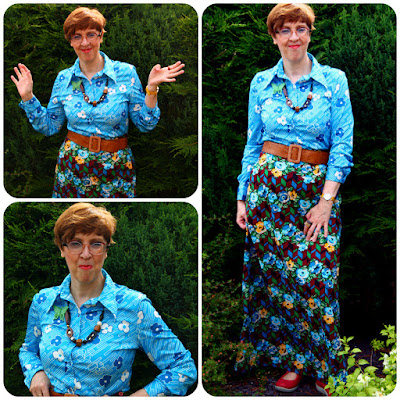 No rest for the wicked, though, as we were up bright and early again the next morning.

Although the sun was there to greet us, it was a bit chilly, and the weather forecast was yet again indicisive so, taking no chances, I wore a long sleeved blouse with the maxi skirt I'd chosen for the occasion. The occasion in question was the long-awaited yearly blogger meet-up with Vix and her partner Jon.

I'm sure you can see how excited I was! 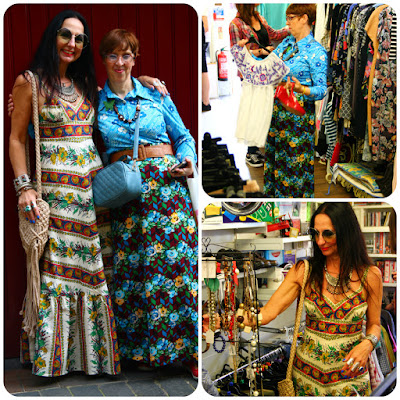 Almost equidistant from both Vix's and Jon's home and our temporary one, the town of Bridgnorth is where we'd chosen to meet.

Bridgnorth is a market town which was founded in the 11th century and is virtually unique in England, being a town of two halves, with High Town perching on a sandstone cliff overlooking the River Severn, and Low Town built along the river's banks.

We met up in High Town and, after lots of squealing, exclaiming and of course, hugging, we made our way into the town centre where - oh joy of joys - quite a few charity shops were open for business in spite of this being a Sunday. They must have known we were coming! 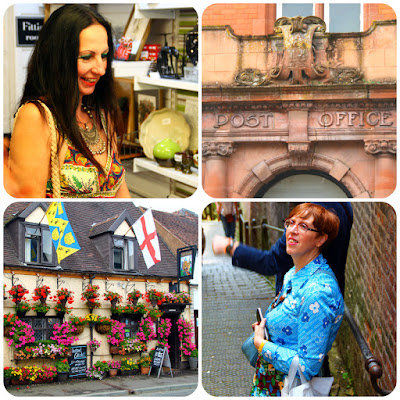 As you've probably noticed, I was already in luck, as I found both the pristine pair of red Clarks shoes and the top I am holding up above. 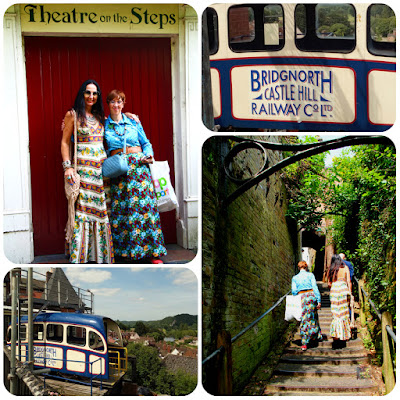 High Town and Low Town are connected by several steep flights of steps, although the less able or energetic can make use of the funicular, or Cliff Railway, the oldest (it opened on 7th July, 1892), and steepest one in England, which makes the dizzying journey countless times a day, from 8 am to 8 pm from Monday to Saturday. 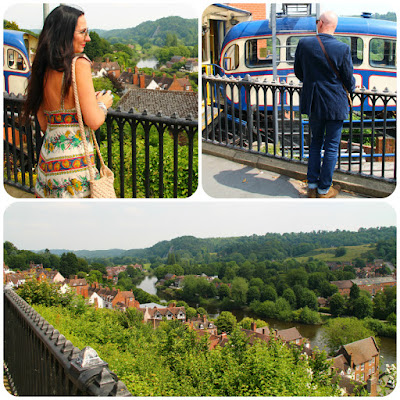 I bet Jon was secretly pleased that it only opens at 12 am on a Sunday!

Beyond the cliff railway terminal in High Town, there are wonderful views of Low Town and the Severn valley from Castle Walk, which leads all the way to the landscaped Castle Grounds. 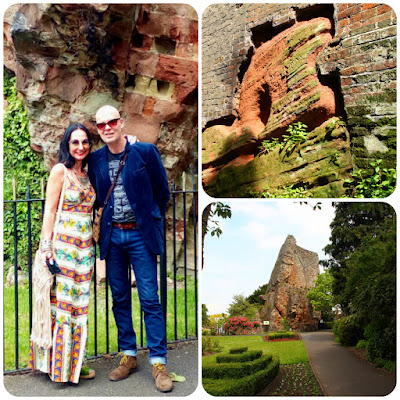 Here, all that remains of the once mighty castle, a gigantic fragment of the Norman keep, leans at an impossible angle courtesy of the Parliamentarians in the Civil War. 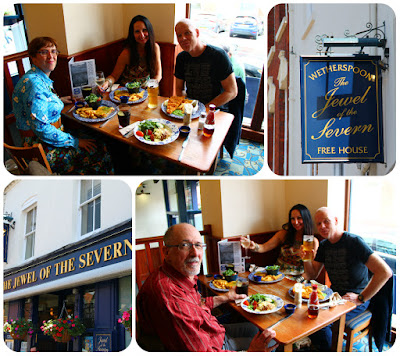 Back in town, it was time for lunch, which obviously was had in the local Wetherspoon, the delightfully named Jewel of the Severn. 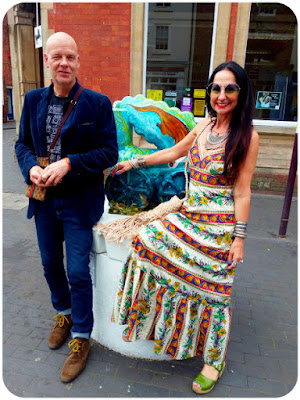 After lunch, and before we made our way to our cars for the next part of the day, it was time for some state portraits, posed in front of one of the 12 artfully decorated locomotive sculptures, which form the Bridgnorth Art Trail project. This one is called Platform Severn.

You can see our portrait here in Vix's post. 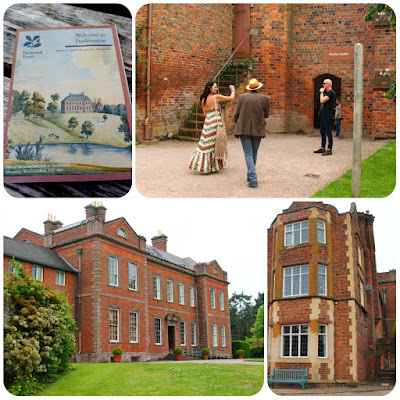 But as I already hinted, the day wasn't finished yet. It was time for some culture, to be found a mere 10 minutes' drive away at Dudmaston, a National Trust property which comprises a stately home with galleries, gardens and parkland.

As it was quite late in the day, we only had time to visit the house, which dates from the 17th century, and adjoining galleries.

The estate was passed to the National Trust by its last owner, Rachel, Lady Labouchere, in 1976.
Sir George and Lady Labouchere started collecting Modern Art in the 1950s while Sir George was working for the British Embassy in Brussels. The Laboucheres installed the galleries you can see at Dudmaston today. 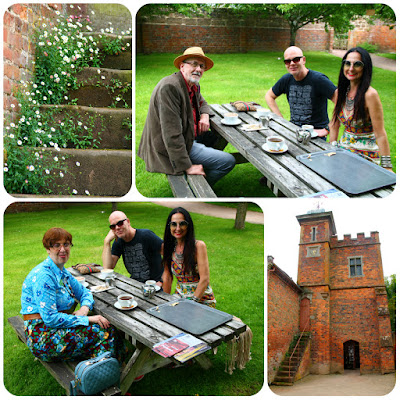 Having completed a tour of the house and galleries, we were gasping for a drink, so we plonked ourselves down at one of the picnic tables in the orchard for restorative cups of coffee and tea.

It had become quite overcast by then, and the air was turning oppressive, threatening rain. I was rather envious of Vix's airy Summer dress, which she'd had the forethought to wear, feeling more than just a tad overdressed in my long sleeves.

All too soon and with heavy hearts, it was time for goodbyes, as Vix and Jon were leaving for Glastonbury the next day. 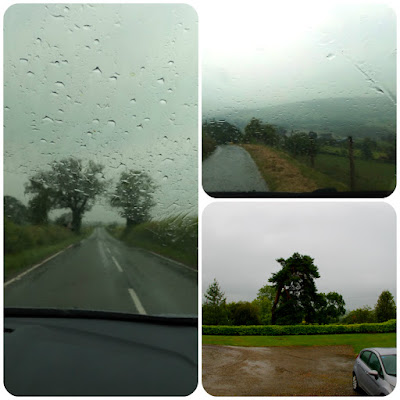 The weather gods, who had been kind to us throughout the day, regaled us with the first drops of rain the minute we stepped into our cars, unleashing torrents of rain on our way back, requiring the use of our windshield wipers at full tilt.

Back in our single track lane, we found our lovely view almost totally obscured. 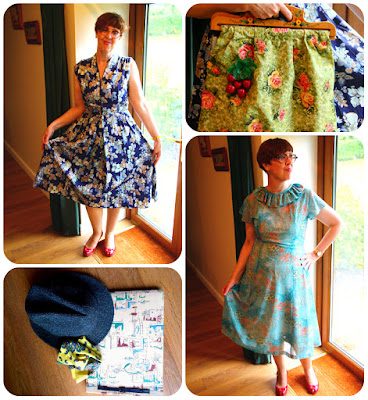 Having arrived back safely, it was time to unpack our presents.

Jos's included a Harris Tweed hat to add to his collection, a pocket square and an amazing vintage photo album. Mine were two fabulous frocks and the most darling wooden handled fabric bag with a plastic cherries brooch pinned to it.

Those of you who follow me on Instagram might have seen that I already wore the dress for one of our outings. Yes, you have read that right. It wasVix who gave me the final push to join Instagram, so that you can now follow me @polyester_princess61.

I hope you'll join me again for the next installment of my travelogue.

* From A Shropshire Lad, by A.E. Housman
Posted by Polyester Princess at 16:37