Too hot to blog

For the last couple of days, Belgium has been in the throes of a record-breaking heatwave. If we were happy to have avoided the first heatwave, which hit Belgium in the last week of June, by escaping to the UK where temperatures were much more bearable, we now had no choice but to bear the full brunt of it.

I'm absolutely no good with hot weather, which renders me rather useless, especially when the mercury rises to 35° Celsius and higher, so my first thought was to go AWOL, as the mere thought of writing the next episode of my travelogue left me exhausted.

But then I had a brainwave! Ever since I'm on Instagram, I've been making the effort of having my outfits photographed on an almost daily basis. And since this blog is outfit-based to begin with, what better opportunity to show you what I've been wearing since my return to the daily grind. 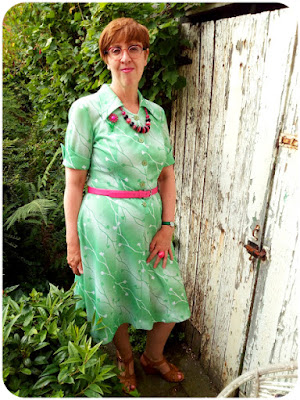 Having returned home on Saturday the 6th of July, I fortunately had two more days to adjust before I was due back at the office on Tuesday.

For my first post-holiday working day, I wore this green and white floral vintage Hyltea of Sweden dress, which I accessorized with lots of pink. It was a mild Summer's day, not that I remember much of it as I spent it trawling through 700 plus emails and feeling a bit sorry for myself. 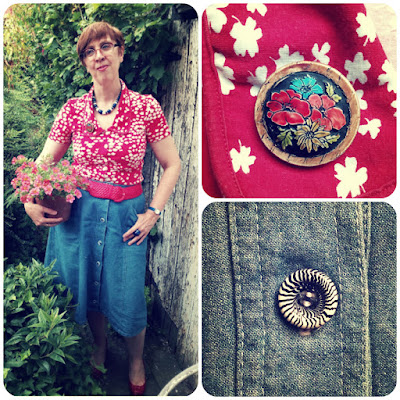 I'd been hunting for a decent denim skirt for a while when I happened upon this button-through one at Think Twice. It had the most hideous buttons, but once again my button stash came up trumps and yielded these navy and white swirly ones which fit the bill perfectly. So much better!

I was feeling blue and seeing red in more than one way on Wednesday, as even more backlog was generated at work due to the installation of new computers.

But never mind that, let's have a look at the rest of my outfit! I wore the skirt with a red and white top charity shopped back in June, to which I pinned a vintage carved wooden flower brooch. A navy and white beaded necklace and red woven belt completed that day's outfit. 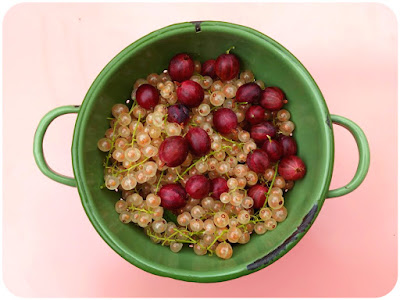 In spite of the fact that our white currant bush had been ransacked by the resident wood pigeons, there were still more than enough left to add to fruit salads and for Jos to make two pots of jam. We were able to pick some juicy, ruby red gooseberries too! 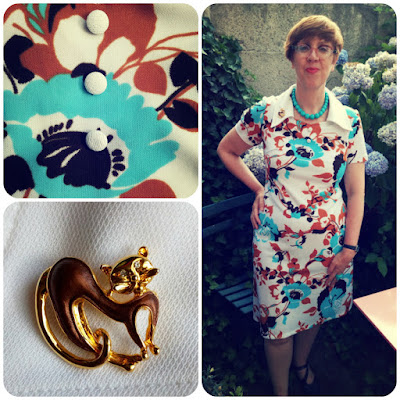 I hardly ever wear white, but gladly make an exception for white with a flower print. I have several such vintage frocks in my wardrobe, but it had been a while since this one got an outing. I love its unusual blue, brown and black print and the row of three white buttons at the yoke.

The print's colours were the inspiration for my blue beaded necklace and the brown-bodied cat brooch, which was a gift from the lovely Goody!

That was Thursday's outfit sorted! 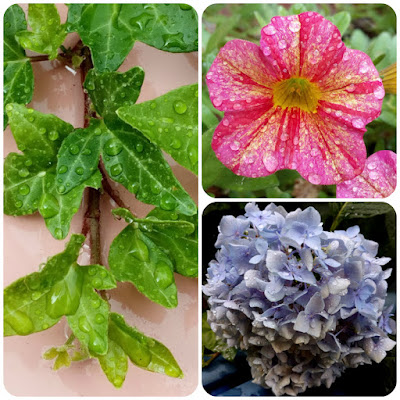 Friday was a bit of a sad day as we had to go to a funeral.

In spite of its sunny start, a leaden sky forewarned that a storm was brewing on our way back home. Sure enough, we hadn't been back for long when the heavens opened and we were treated to a torrential curtain of rain, which turned the garden into a jewellery box of raindrops. 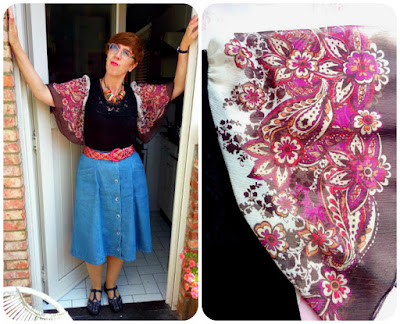 I changed out of my funeral get-up into Wednesday's denim skirt, which I now combined with the butterfly sleeve top I bought in a charity shop in Shrewsbury. Suggestions were made as to the origin of the sleeves and both a scarf and a tablecloth were mentioned.

I was wearing my Hotter shoes, which I charity shopped on the same day as the top, for the first time, but the jury is still out on them, as I'm sure they would have given me blisters if I'd worn them for any length of time. 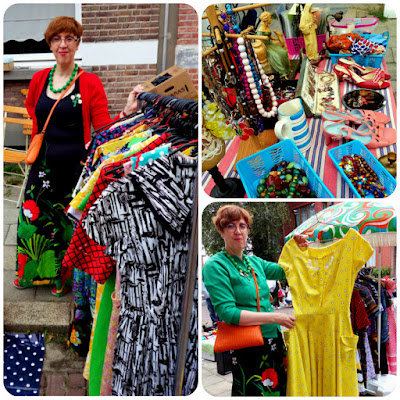 Saturday was hectic as it was spent preparing for the yearly flea market held in our street and the surrounding ones. I hadn't seen most of my stock for nearly a year, so there were quite a few surprises, and as usual one or two frocks might have made it back into my wardrobe ...

We were up around six-ish on Sunday morning, when vendors started arriving in their cars and putting up their stalls. What luxury to just have to open one's front door and bring everything outside!

I was wearing a black maxi dress, its top plain with one or two random flowers, and a huge, full-blown flower print on the skirt. I initially wore a thin, cropped red cardigan, but it turned out to be chillier than expected, so I soon exchanged it for a warmer, green Tricel number. 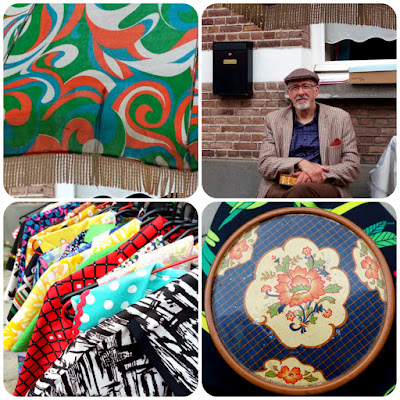 At first, trade was slow, but soon my rail of colourful vintage clothes attracted quite a few browsers, even if it didn't always result in a sale. I lost track of the number of times I heard the sigh: I wish I had the guts to wear that!

One lady eagerly rummaged through the clothes, telling me she used to wear vintage all the time, but had stopped doing so. I had a bit of a secret chuckle when I heard her boyfriend/husband remark that now she looked just like everybody else!

My proudest moment came when I had a return visit from a lady who'd bought lots of stuff from me last year. She actually had other plans for the day, but insisted on coming along first. Once again, she left with armfuls of dresses, skirts and tops. She even came back for more at the tail end of the market. 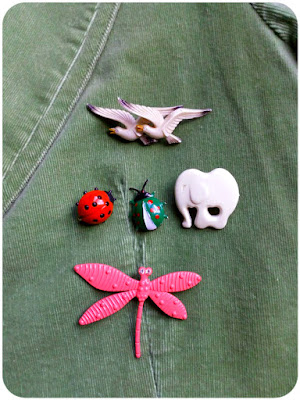 I was feeling a bit knackered so only made a short foray myself. These five animal themed brooches, all from the same seller, and a moss green corduroy jacket, were my only finds. 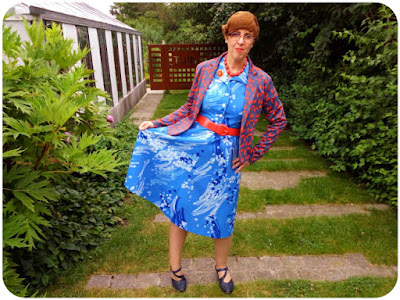 Back to work on Monday, although I allowed myself the luxury of making a later start.

I wore a mood-boosting combination of blue and orange. My azure blue and white vintage dress was accompanied by an orange belt, brooch and necklace. The midnight blue jacket sprinkled with orange leaves was a charity shop find from last year, which should definitely come out more. 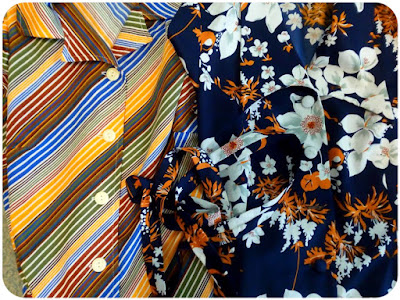 I strolled to Think Twice during lunch break, just for a browse, but these two vintage frocks insisted on leaving with me. They'll be worn on the blog soon, I promise. 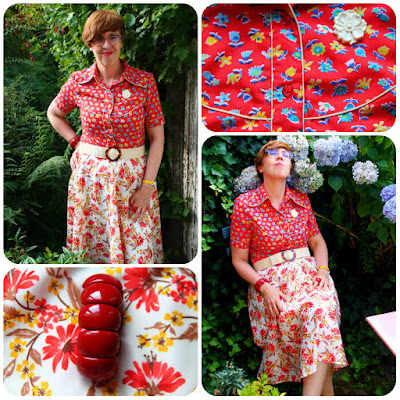 Tuesday's outfit wasn't featured on Instagram. This skirt and blouse combo has already made it to the blog before. I dare anyone not to smile at spying this happy marriage of floral prints. It certainly made me smile!

Both the skirt and blouse are vintage and so is the flower brooch. 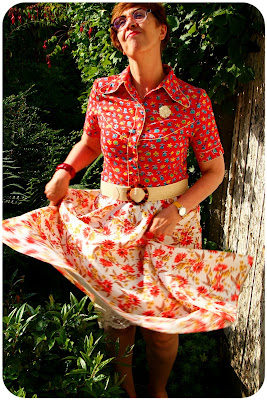 The skirt has got just the right proportions for a good twirl, offering an unintentional peek of the lacy border of my vintage slip. Oops! 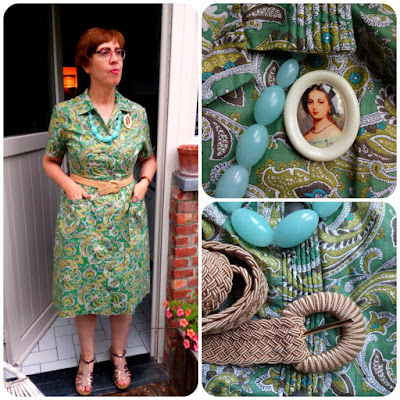 Skipping Wednesday, as no outfit photos were taken, Thursday's frock was a vintage cotton one bought from Ashmans Antiques and Old Lace in Welshpool last year. We have paid the shop a return visit this year, which you will read all about in the next episode of my travelogue.

This green Paisley print dress is an utter joy to wear, even though I didn't pick the right day for it as it was slightly chilly. I picked up the aqua bits in the dress by wearing pale aqua beads. Other accessories were a large oval brooch with a portrait of a lady, and a tan coloured woven fabric belt. The rose gold sandals have cork soles and heels and have been on constant rotation as they aren't just pretty, but pretty comfortable too! 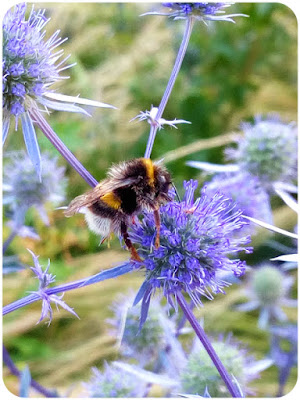 Things started warming up ever so slightly on Friday. As always on my way to the bus stop, I stopped to admire the imaginatively planted deaconry garden, catching this busy bumble bee on camera.

The dress I pulled from my wardrobe for the final day of the working week was this coral one in a lightweight Diolen, its print featuring green and blue. 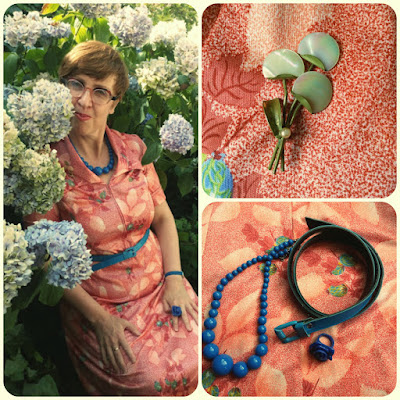 The brooch I was wearing is a posy of gold metal flowers finished with mother-of-pearl.

Our Hydrangea bush is just the perfect backdrop for outfit photos in Summer, but you should look at the poor thing now, as it has suffered terribly from the heat.

Weather permitting, my next post will be business as usual when I continue with the next installment of my travelogue. Hope to see you then!