Summertime and the living is easy

The weather gods must have finally taken pity on us, as the view framed by our cottage's window on Thursday was bathing in plenty of sunshine.

This prompted me to wear one of my favourite frocks, a vintage red checked wrap dress sprinkled with white flowers and edged with white rickrack. If that already sounds delightful, what about butterfly sleeves? Check! The dress is fit and flare and has revealing tendencies, so vintage slip to the rescue! My Clarks Cloudsteppers, the most comfortable shoes ever, were a perfect match. 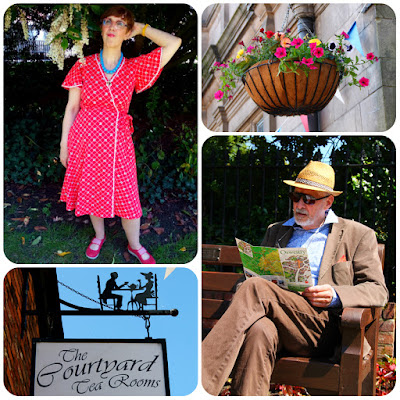 We'd slept a bit longer than usual so that we reached our destination, which was an hour's drive from the cowshed, by late morning only.

Oswestry, a charming little country town close to the Welsh border, is in the North of Shropshire, an area we hadn't visited before. However, it was by no means the first time that I had been there! As a 15-year-old, while travelling to Wales with my parents and siblings, it was the first UK town I ever set foot in. Not that we stayed there for long: on passing a little corner shop, my Dad stopped the car and sent me to buy groceries. 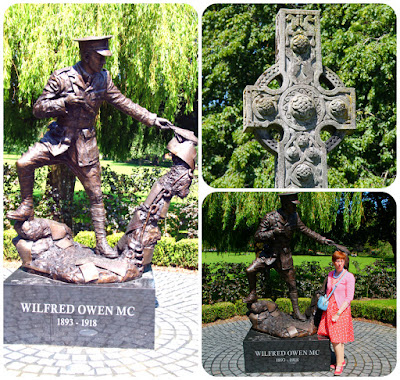 Back in the here and now, we easily found a parking spot near the town centre and, halfway up the High Street, we perched ourselves on a bench in the town park, Cae Glas Park, to get our bearings.

The war poet Wilfred Owen (1893-1918) was born in Oswestry, and although he only spent a few years of his life here, his family's connection with the town goes back generations, and his grandfather was once mayor of the town. In 2018, a statue to him, created by local artist Tim Turner, was unveiled in the park. 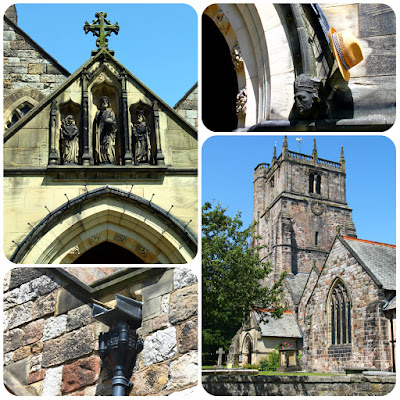 Just a short stroll on the High Street takes you to St. Oswald's Church, which was completed in the early 1670s. Oswestry is said to be named after king and saint Oswald, and the name is thought to be a corruption of "Oswald's Tree". 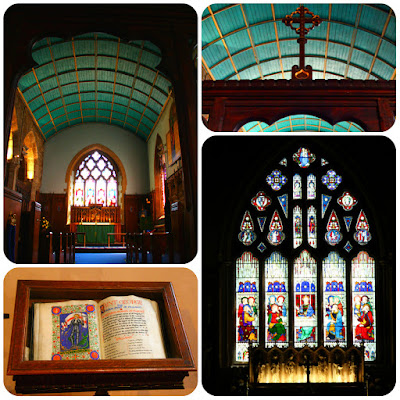 Oswestry is a traditional market town with award-winning markets, both indoor and outdoor, drawing visitors from all parts of Shropshire and Mid Wales. 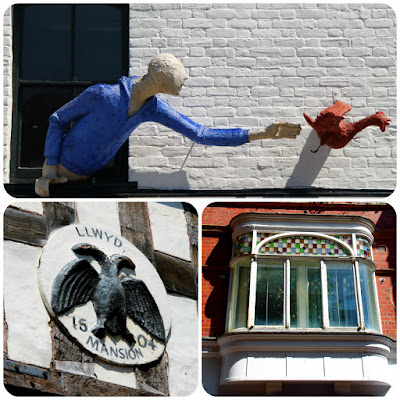 The town has an eclectic mix of independent shops selling anything from bric-a-brac to books, as well as quirky antique shops and galleries.

The sculpture of the man chasing a chicken was aptly displayed above USA Fried Chicken in Willow Street. 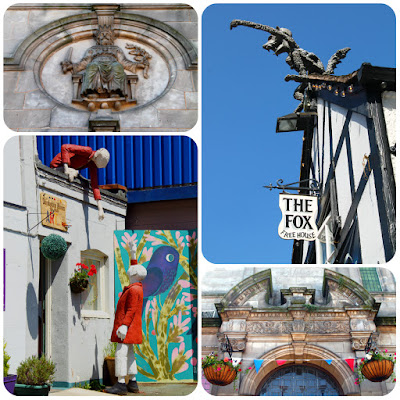 Lunch was had at the local Wetherspoon, named after the war poet, and housed in an ugly 1960s/1970s monstrosity of a building, which we believe used to be the post office. Inside, it was light and airy, and the fish and chips we had was delicious. I made a photo of both our plates as proof to Vix that Jos didn't have his usual jacket potato! 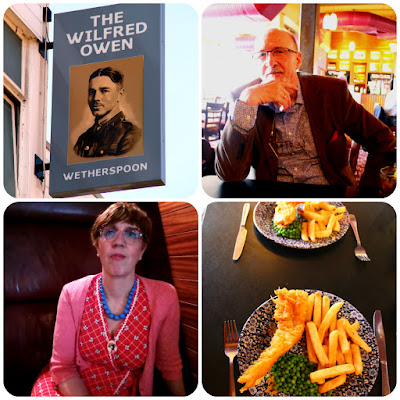 There were charity shops galore as well, and I think we visited them all, finding treasure in many.

My finds included two cotton summer tops and a pair of wide-legged trousers, which you can catch a glimpse of on the bottom right. I also found the first of my brooches, a delighful Lucite one. The chap volunteering in that particular shop was a bit of a brooch collector himself resulting in a good chat about the subject.

Then I found Jos this amazing pinstriped linen H&M jacket, just as he was lamenting the fact that he hadn't packed a light-weight jacket. 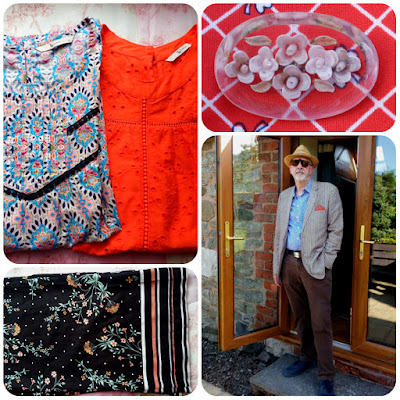 Things were starting to heat up on Friday, when temperatures reached heights of about 25° Celsius.

The perfect day for a visit to another National Trust property and an amble through its gardens.

Powis Castle is just across the border in Wales, the road meandering along the border, welcoming us to Wales one minute and back to Shropshire the next. 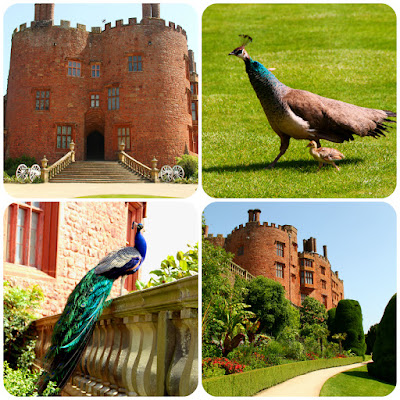 We visited this magnificent medieval castle, built on a rock above its terraced gardens, last year as well. This was on a day with a rainy start, from which we sheltered by starting with a visit to the castle itself to view its amazing collection of paintings, sculpture, furniture and tapestries.

This time, we decided to visit the gardens only, but not before making the acquaintance of Captain Peacock, his wife and their peababy, who were begging for crumbs in the courtyard. 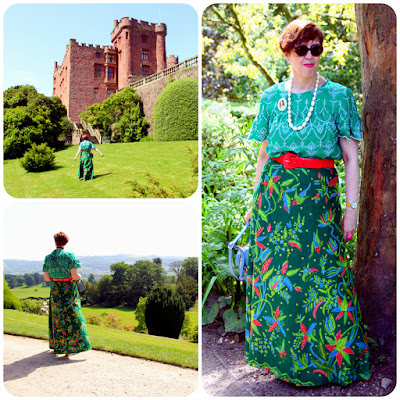 Here's a look at my outfit, which might very well be my favourite of our holiday. I felt fantastic in my vintage waxed cotton maxi skirt combined with a cotton peasant top I bagged in the New Look sales last Summer. A red vinyl belt, oval vintage brooch bearing a portrait of a lady and ivory coloured beaded necklace completed by outfit. Oh, and my faithful Cloudsteppers, which really make me feel as if I am walking on air. 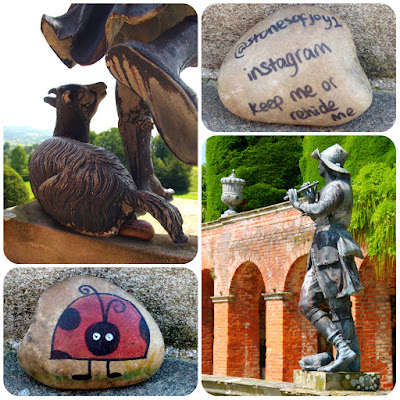 The world-famous garden, overhung with clipped yews, shelters rare and tender plants. Laid out under the influence of Italian and French styles, it retains its original lead statues and an orangery on the terraces.

I was photographing details of one of the lead statues, when I spotted this stone of joy painted with the cutest of ladybirds from @stonesofjoy1. I was thrilled to bits. I'm still not sure if I will rehide it here in Belgium, as I am very tempted to keep it as a souvenir. 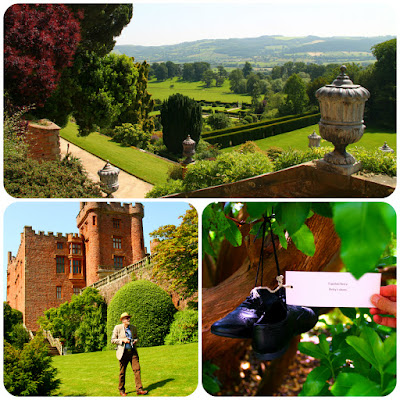 There were some curious objects hidden away in the trees, like this pair of shoes, which bore a note in both English and Welsh that they were Betty's. These were part of a children's trail laid out in relation to a project about a group of pupils and teachers from the Ashford Welsh Girls School, Middlesex, who were evacuated to the castle in 1939.

Exploring the garden, we wandered the Italianate terraces and marvelled at those spectacular yew hedges and lavish herbaceous borders. 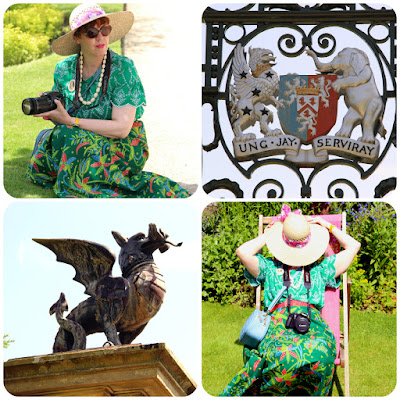 Arriving at the bottom level, we briefly sat down in one of the deckchairs on the lawn, but the sun had become too hot by then, so that after a visit to the lavs (there was a queue!) we sought out the shade once more. 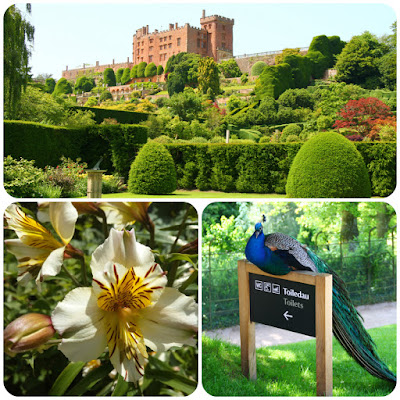 This we found in the woodlands opposite the castle, where several walks have been laid out. Our weary limbs, and my rebelling knee in particular, dictated that we take the least streneous one, which at one point passed a tranquil, reed bordered pond. Here, I left Jos sitting on a rough-hewn wooden bench, following a path that brought me to the igloo shaped ice house! 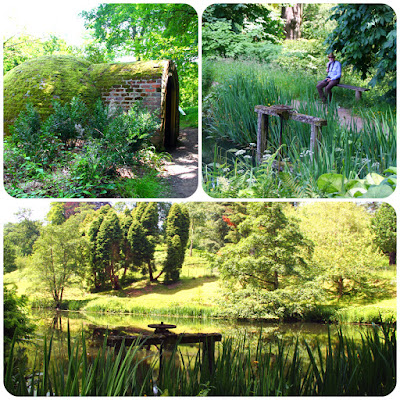 Retracing our steps to the garden coffee shop, we grabbed the last shady table and sat down with cups of cappuccino. Here, more crumb-begging was being done by this funny chap, which we'll call Mr. Humphries.* 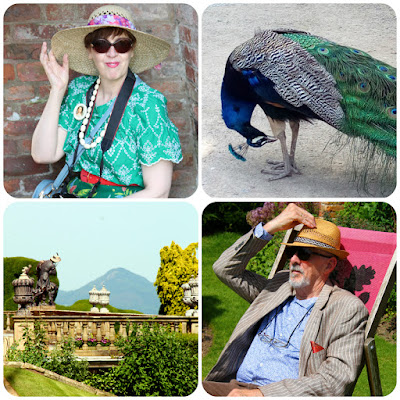 The sun still blazing, hazing the view towards the mighty Welsh mountains, we said our goodbyes to Powis Castle and drove back to England.

*Back in early Spring, two new peacocks arrived at Powis Castle and those who follow the castle's Facebook page like I do were asked to choose names for them. By popular vote, they were named Captain Peacock and Mr. Humphries (my choice as well) after the characters of the legendary British sitcom Are You Being Served. I'm not sure if I got the names of the actual peacocks we met right.

Finally, even if I'm not exactly wearing shorts, and it's Sunday already, I am linking to Nancy's Fancy Friday.
Posted by Polyester Princess at 19:35