Holiday preparations are in full swing here at Dove Cottage!

Today was my last day at work and tomorrow we'll finish the dreaded packing. I've already packed away most of the essentials, but there are clothes and shoes strewn all over our bedroom. Whittling them down to a manageable pile, while still leaving me with enough to cover four seasons isn't the easiest of tasks.

Then, on Saturday, we will be getting up at the crack of dawn for the start of our journey, which will once again take us to Shropshire and the Welsh Borders in the UK.

And on Sunday ... well, we've already got a little treat planned for that day! 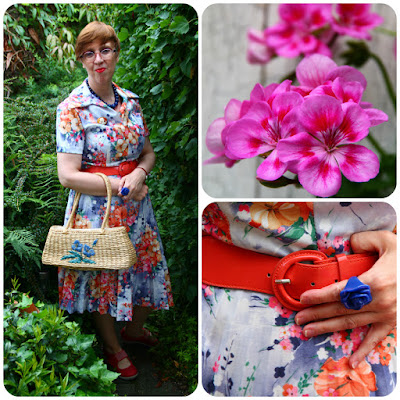 But before I bid you au revoir, I still have to tie up the loose ends of the last two weeks.

So, let's start with this frock, which I wore two weekends ago. Lovely though it is, it didn't make the grade and won't be travelling with me. I mean, look at those pleats! I don't think they would survive the journey unscathed.

It's been in my wardrobe for absolutely ages, and it was in desperate need of another outing. Its print, which has more flowers than the average garden, never fails to put a smile on one's face. 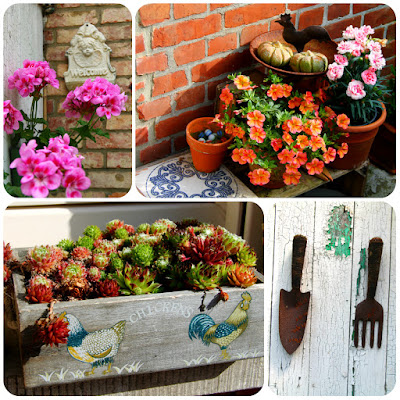 Especially when worn to - finally! - our first outdoor flea market of the year!

We'd been on tenterhooks all week, as stormy weather had been predicted, but fortunately the worst of the wind had died down by Saturday night, with Sunday dawning an almost picture perfect early summer's day. 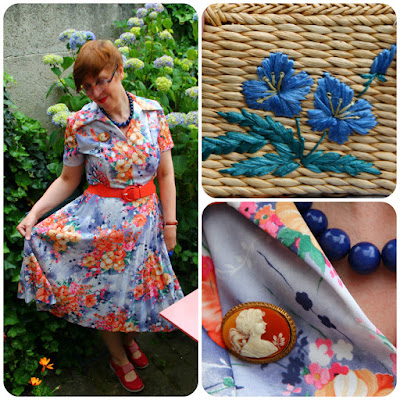 Orange being the most predominant of the print's colours, I accessorized the dress with an orange belt and one of my Cameo brooches, which has an orangey background. The dress's navy bits were picked up by my beaded necklace and flower ring.

On my feet, my trusted Clarks Cloudsteppers. This was a huge flea market, so we had a lot of walking to do.

My straw bag with its appliqued cornflowers was just the right size to carry essentials. 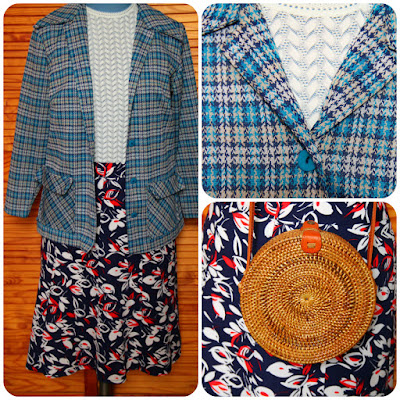 Sadly, this year's edition of the flea market, which we've been going to for many years, was a bit of a disappointment. The fields and surrounding streets where the market was held seemed to be colonized by stalls selling cheap tat, toys and children's clothing, leaving only a handful of  stalls worth looking at.

I did manage to find a couple of things, though, so that the journey wasn't a completely wasted one: a vintage skirt and jacket, and a round wicker bag, which I had been on the lookout for but wasn't prepared to buy new. 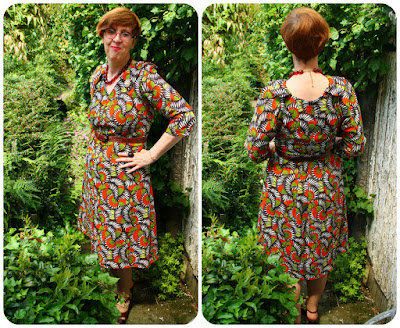 The next day, Monday, was a holiday in Belgium, but as the weather wasn't on its best behaviour, alternating sunny spells with bouts of rain, we stayed at home, doing some pottering and a bit of lounging.

The dress I plucked from my wardrobe was charity shopped on Retro Day back in March, and this was actually its first wear. It is clearly and a bit clumsily handmade, and features a deep, collared V-neck and three-quarter length sleeves. Upon seeing its colourful, exotic print, you might be forgiven in thinking that the fabric is waxed cotton, which it isn't. It's a kind of thin terry cloth material, for want of a better description. 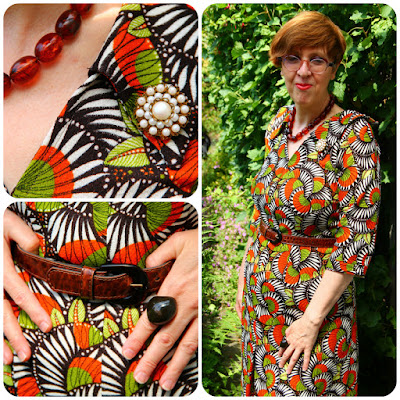 I pinned a pearly brooch to its collar, which somewhat disappeared into the print, and opted for shades of brown for the rest of my accessories. 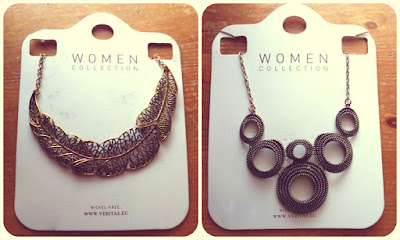 Back at work, I spent one of my lunch breaks visiting a new charity shop selling only clothing, which has recently opened in a side street of Antwerp's main shopping thoroughfare.

The shop is nicely laid out and the stuff they sell is above average but generally a bit on the expensive side. I mean, a King Louie dress for € 24 ... no, thank you!

Nevertheless, these two necklaces, still on their retail cards, came home with me. They were € 3 each, which isn't too bad. 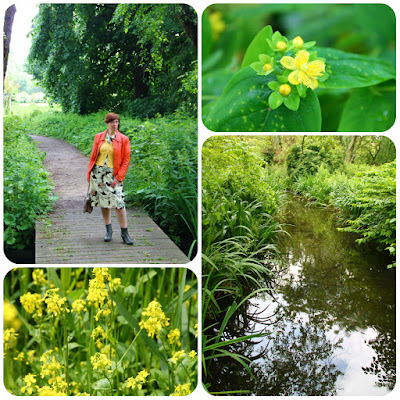 We woke up to torrential rain on Saturday. In a lull between two showers, we made it to our garage without getting wet, and went off for our usual charity shopping trip.

We'd taken the camera, jokingly telling each other that it might clear up later so that we could take outfit photos in the park. Well, wouldn't you know, by the time we got there, the sun was out!
Miracles do happen! 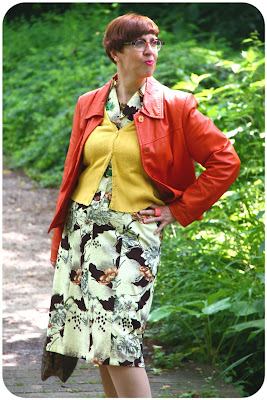 Here's a look at what I was wearing.

The dress is another one I've had for ages. Its floral print features coral, brown and green on a pale lemon background. I'd set out wearing both a cardigan and my orange leather jacket, but with the sun shining it turned out to be too warm for both. 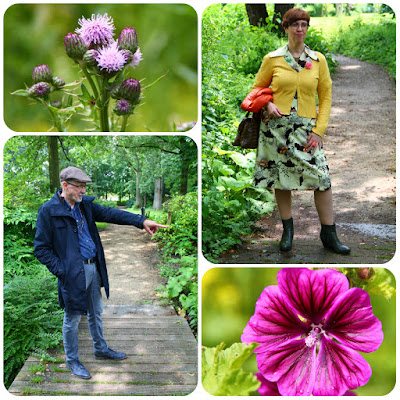 My yellow cardigan, with its pattern of hearts and tiny heart buttons, is King Louie, and was charity shopped earlier this year. The flower brooch I pinned to it is actually a hair clip! 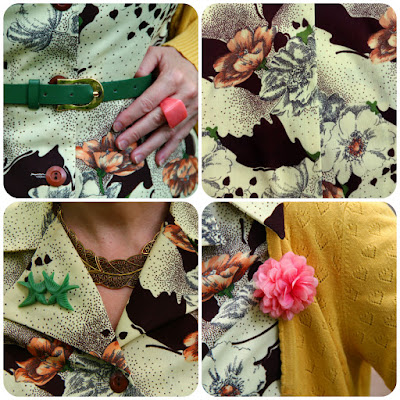 The dress has got a tie belt, but in honour of the small splodges of green in the dress's print, I substituted it with a green leather one. I also added my green "birds in flight" brooch to its collar.

Further accessories were a chunky coral ring and one of my new necklaces! 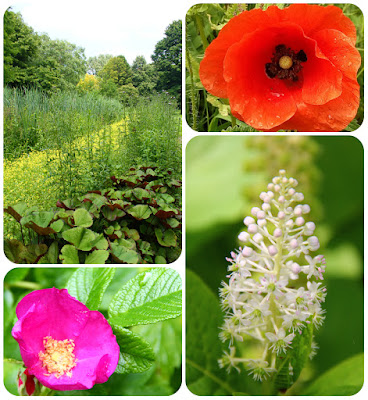 Having completed our circuit of the park which not only looked but smelled heavenly, especially after the rain, we walked over to the charity shop across the road. 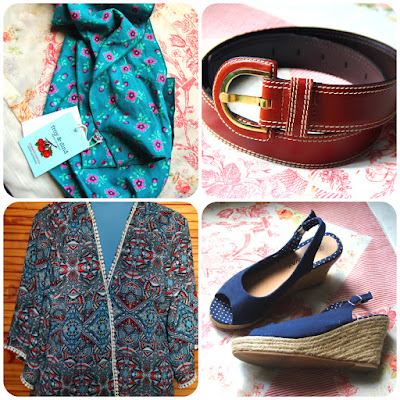 I've donated quite a few bags of clothing in the last couple of weeks - I actually spotted one of my vintage short-sleeved jumpers on the rails - which made it a completely guilt-free shopping experience.

My finds, clockwise from top left, were: an organic cotton scarf from Antwerp label Froy & Dind, still bearing its tag, a wide, red-brown leather belt, a pair of navy espadrille wedges and a short kimono cover up. 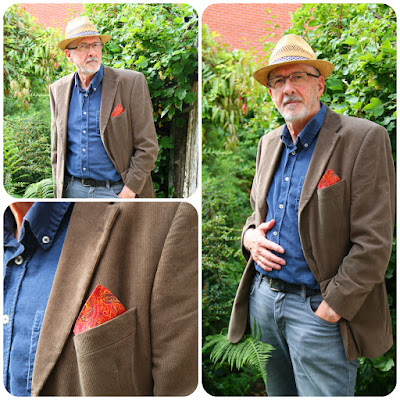 But the icing on the cake was this soft-as-butter taupe cord blazer for Jos. The pocket square is made from an orange Paisley print tie, which I found still packed in its plastic wrapper.

As the rest of that weekend and the following week was a flurry of last minute preparations and wrap-ups, that will be it for the month of June.

So, there will be no posting from me for about two weeks, as I will be mostly off-line, although I might be reading your blogs whenever time and WiFi allows.

See you in July!

Posted by Polyester Princess at 19:49