The joys of second hand shopping

In the week after our mini heatwave, temperatures plummeted considerably, and we were back to what passes for Spring in this part of the world. In other words, we were treated to rain, sunny spells and thunderstorms, more often than not all within one day.

On Saturday before last (yes , I know, I'm lagging behind again), the weather was quite stormy.

A gale force wind put paid to any walks in the park, as they were all closed for safety reasons. 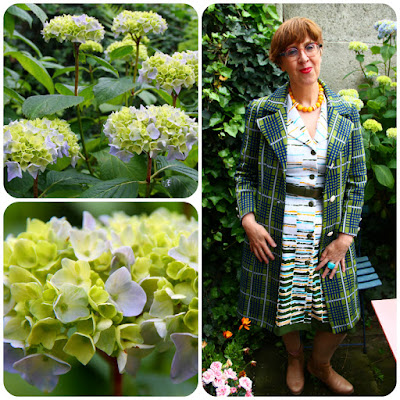 I plucked this half-forgotten frock from my wardrobe. Strictly speaking, I didn't actually forget about it, but I'd mentally put it into the "to be tried one more time" pile, as it was a bit tight in the chest area, which caused some gaping. As it fit me perfectly otherwise, I managed to solve the problem by adding a press stud between the first and second button.

Some kind of outerwear was needed, so I wore my Lilli Ann Knits coat on top. I love this coat to bits but I'm trying to wear it only sparingly as it's not in the best of conditions, with lots of loose threads which seem to multiply with every wear. 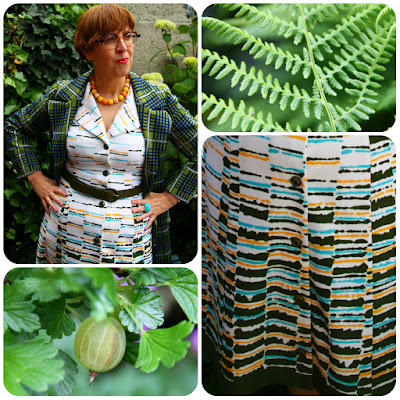 I thought its chartreuse, white and navy plaid worked well with the dress's higgledy piggledy stripey print featuring forest green, turquoise and yellow. Judging from its condition and that of its label (it's made in England, by Leygil London) I don't think it was ever worn.

The dress buttons all the way through with forest green buttons and I added a belt in the same shade of green. To tie in with the yellow, I added a yellow, orange and white beaded necklace, while the turquoise bits were matched by my chunky turquoise ring. 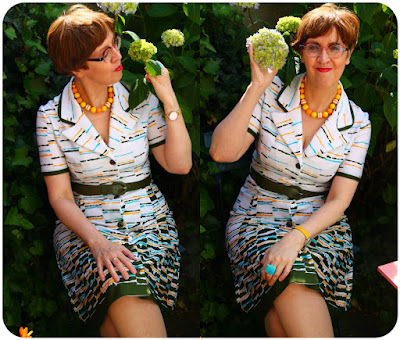 While I was sitting here in the garden, in the calm after the storm, I suddenly remembered I had yet to show you my Think Twice bargains of the week before. Well, I did mention a bagful of bargains in my previous post, didn't I? 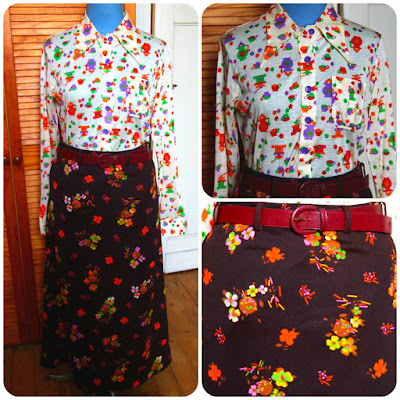 I will be putting this chocolate brown floral maxi skirt away for Autumn, as it's a heavy, lined Crimplene. On the other hand, I could very well be taking it with me to Shropshire, as I've been hearing tales of dire weather conditions.

The 1970s shirt, with its dagger collar and purple buttons has the funkiest of prints featuring coffee pots, cups and old-fashioned coffee grinders! How is that for a pick-me-up? 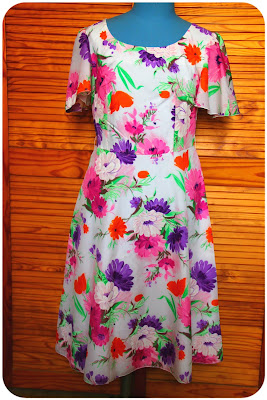 I'm hoping to wear this floaty Trevira number with its blowsy flower print and frilly butterfly sleeves as soon as it gets warmer again.

But then again, it will be a toss up between this one and the cotton deckchair striped Summer dress I picked up at the same time. Double breasted and with a wide notched collar and a half belt at the back, it is a true classic. Its label says Jan Sue of California. 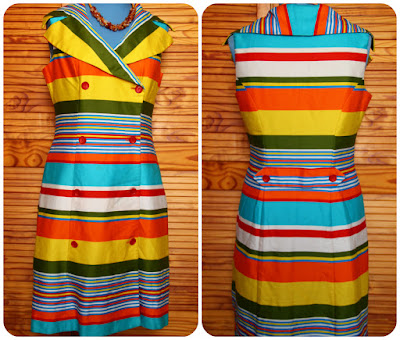 Oh, the joys of second hand shopping! You never know what you'll find, which makes it exciting, you won't end up looking like everyone else and you're making a statement against fast fashion, all at the same time.

Are you participating in Slow Fashion Season? You can sign up here. The idea is that 10000 people commit to not buying new clothes from 21st June - 21st September to raise awareness to the fact that fast fashion is one of the most polluting industries in the world.

There's just 6 days left to register: just click on the link, enter your email address and click Take Part. It's easy peasy, so just do it. At the time of writing, over 9700 people have taken the pledge. Oh, and second hand shopping is allowed! And it so much more fun, too! 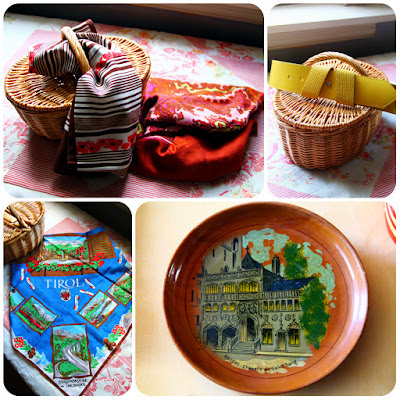 And that's what we did to defy the weather last Saturday. If you've been following my blog for a while, you'll know that Saturday usually is our charity shopping day. Even if we come back empty handed, which happens from time to time, the thrill of the chase never pales.

This time, we found a mini picnic basket, which - surprise! - I'll be using as a handbag, several scarves, a yellow belt and a hand-painted wooden souvenir plate depicting the Basilica of the Holy Blood in Bruges. 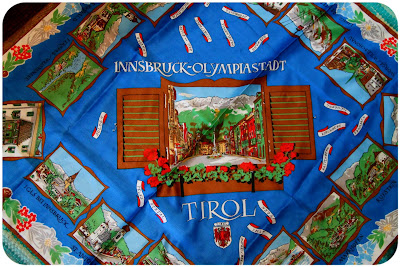 One of the scarves is a souvenir too. I was drawn to its vivid colours and the image of the shuttered window with its box full of geraniums at its centre. I'd seen the name Tirol, but it was only when I looked at it more properly at home that I realised it's a souvenir from the Winter Olympics held in Innsbruck. Some googling revealed that the last one was in 1976, but there was another one there in 1964 as well. My guess is that it is from the former. 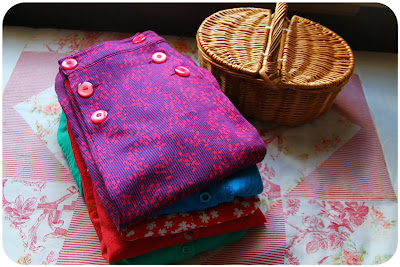 At another shop, I ended up trying on an armful of clothes, which all came home with me, as did the necklace I'm wearing below.

The skirt and blouse are both from Belgian label Wow To Go, while the cropped cardigan is from Zoe Loveborn, a brand which used to be sold at a local chain of shops. I've got quite a few of their cardigans, all bought second hand over the years. 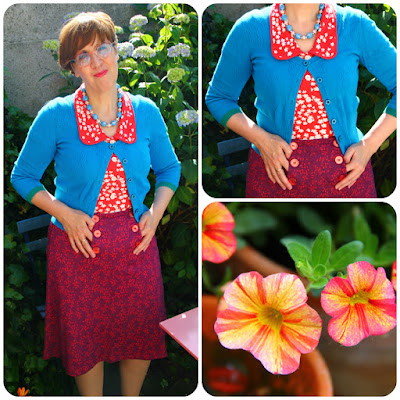 This short, cobalt blue raincoat was also part of my catch. It's from Vero Moda, and will be a welcome addition to my travel wardrobe. I thought my Tirolean scarf looked just perfect with it. 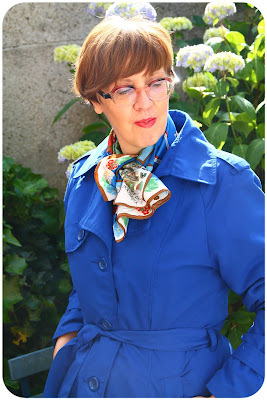 Heading back from the fitting rooms, and walking past the rail of dresses, a flash of colour caught my eye.

This groovy wrap dress is from H&M. It must be well over 10 years old and I remember it vividly, as I used to own it dress in a different - much more sedate - colourway. I almost instantly regretted not getting this colourful version, but never went back for it.

I no longer have my other dress, as I donated it to charity when it no longer fit me, and I obviously wasted no time in making this one mine! 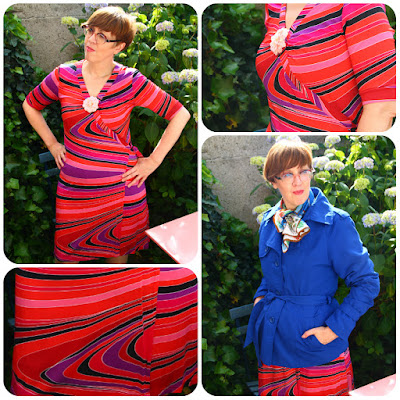 All I'm wearing in these two outfits, as well as two long-sleeved tops which I've added to my travel wardrobe, cost me the princely sum of € 25. Yes, that includes the raincoat!

If you haven't done it before, browsing charity shops for your fashion fix might seem a bit daunting at first. But persevere, and you will be rewarded. Don't be put off, if at first you find it a bit overwhelming and you don't seem to find anything you like. Don't go shopping with a list, but keep an open mind, and dare to step out of your comfort zone once in a while. 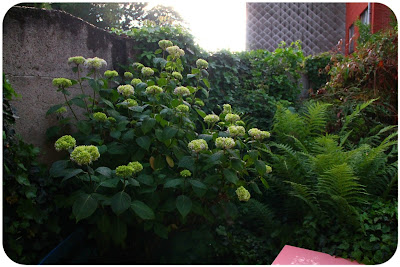 Once you get the hang of it, you'll never go back to retail. But that's what it's all about, isn't it?