We have just survived the first of the really hot days this past weekend, with sweltering temperatures of over 30° Celsius. I know that some of you thrive in this kind of weather (yes, I'm looking at you, Vix!) but I'm finding it increasingly hard to cope with.

But before I tell you about what I wore and did to stay cool, I'm taking you back to the weekend before last, when there was still enough of a chill in the air to wear not only Crimplene but one of my lightweight Summer coats as well. 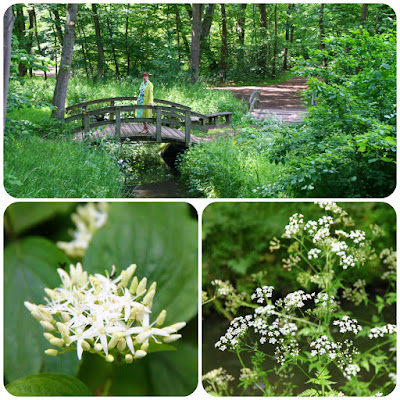 On Saturday, en route to the charity shops, we stopped at the park in Boom. And no, it's not pronounced the way you think it is, the "oo" is phonetically represented by [o:] and sounds roughly like the "o" in "born". 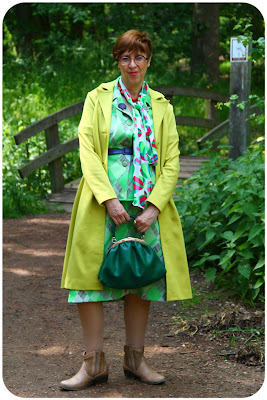 Admittedly, I didn't really need the coat by the time we got to the park, but as I don't think it has ever made it onto the blog, I decided to wear it especially for you! The things one does for blogging!

Another Think Twice bargain, I actually didn't have to think twice when I spotted its lemony loveliness on the shop's rails two years ago.

Wearing it is the ultimate pick-me-up on a sluggish day, as it provides the visual equivalent of an energy drink, but without the caffeine hit and the sticky sugar hick-up. 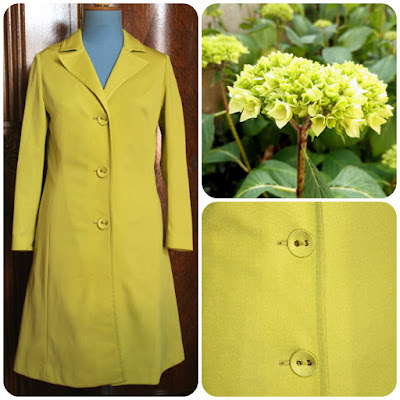 In real life, it does look more lemon than lime, but either way I seem to both blend in with and enhance the greenery of the park, while contrasting with the magenta hues of the Rhododendrons.

I even attracted the attention of the resident bees and butterflies, who must have mistaken me for a flower. 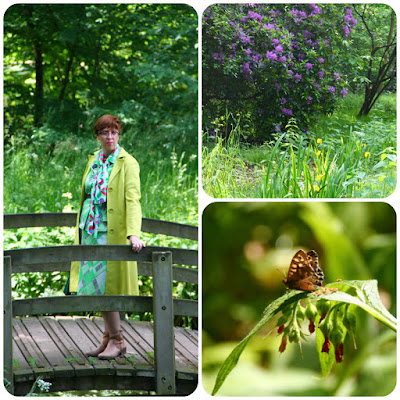 Underneath the coat, I was wearing a much neglected Crimplene skirt suit with a short-sleeved jacket.

In fact, I have several of these in my wardrobe, as for some reason I quite simply cannot resist them.

But the bottom line is that although I do tend to wear the skirts, I don't wear them very often as suits, as I think they are tricky to style. When does one wear them, for starters? When the weather allows for short sleeves, it's usually much to warm for them. And although I could layer a long-sleeved top under the jacket, I'm not sure that it's the look that I'm after. 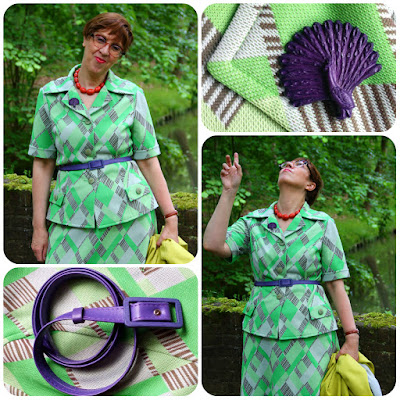 Anyway, that morning I decided to bite the bullet and pulled this one out of my wardrobe.

The jacket being a bit boxy, it obviously needed a belt. I went for contrast by choosing a purple vinyl one, staying with the same colour palette by pinning a purple peacock brooch to the jacket's collar. 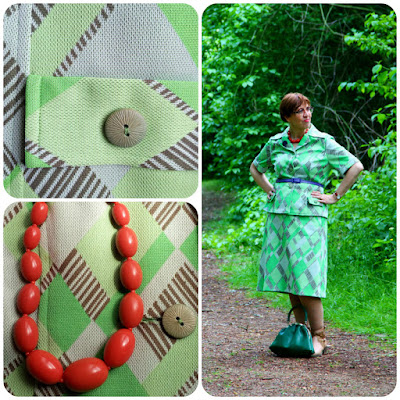 Not wanting to be too matchy-matchy, I picked a vintage orange beaded necklace, found at an antiques centre in Newcastle Emlyn, Wales a couple of summers ago.

I've just noticed that, although quite unintentionally, it matches Jos's shirt! 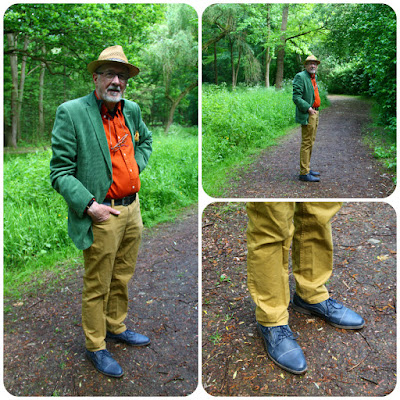 Isn't he looking dapper in his colourful attire? The blue shoes are a recent buy from a local shop. He bought another pair, in pale blue, as well.

At the charity shop, I had a good old dig in a huge box full of scarves, coming up with these three. The pale green, metallic finish shoes, which looked as good as unworn, were a no-brainer. 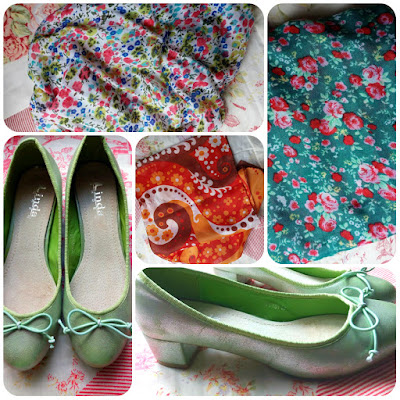 While queuing at the till, I spied this gorgeous pendant necklace. It looks slightly Art Deco to me, so I gave the honours of showing it off to the gorgeous green-dressed Art Deco lady who lives on our bedroom's mantlepiece. 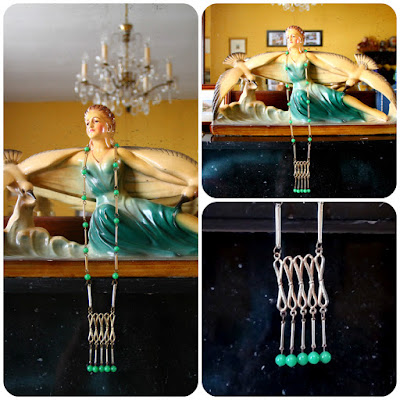 The weather continued to be sunny, albeit quite windy, on Sunday.

Sheltered from the elements, Dove Cottage's little walled garden is thriving.
Sadly enough, only one single Allium globe appeared amid the greenery provided by the rampant ferns. I must take note to plant some more in the Autumn. 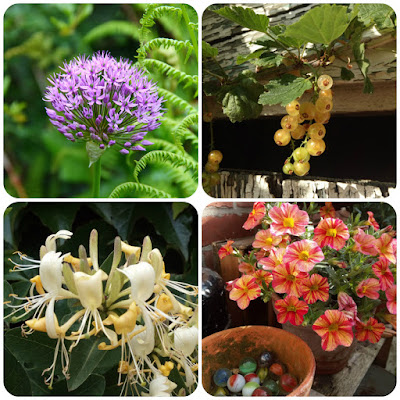 Year after year, the honeysuckle growing against our garden's back wall, delights us with creamy flowers emanating the most heady of scents. We found this baby climber, aptly named Honey Baby, at the garden centre shortly after we moved into Dove Cottage.

And look, here are the first of what looks to be a bumper crop of white currants, most of which will probably be eaten by greedy wood pigeons. But they're welcome to them, as we love watching their clumsy acrobatic antics. 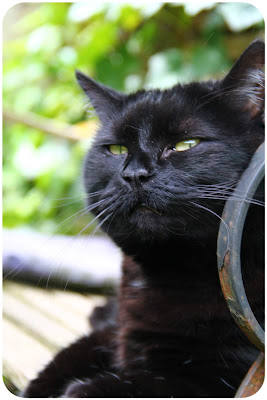 And here's the indisputable queen of our garden! There's no keeping her inside at this time of year, when there are all these sensory delights out there, not to mention the wildlife she is keeping a watchful eye on. She's no match for the wood pigeons, but field mice, beware! 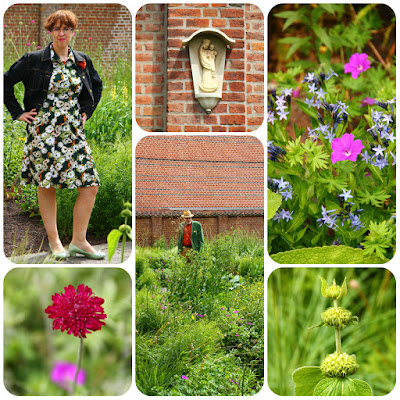 That Sunday was Election Day and, apart from the European Parliament, here in Belgium we were also voting for both the Regional and Federal governments.

Our polling station was at the local library and on our way back we took the opportunity to take some photographs at the exuberantly planted front garden of the deanery.

The eagle-eyed will notice that I'm wearing the shoes bought at the charity shop the day before. 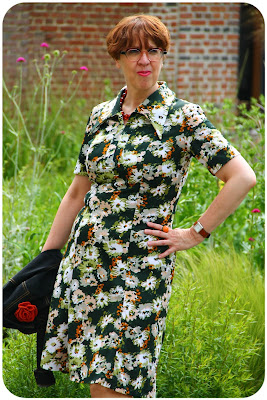 That's if you can take your eyes off the flower-strewn Diolen dress I'm wearing. The flowers in question, in white, pale grey, moss green, pink and orange, are floating on a background of darkest green.

In other words, the perfect dress to pause and pose among the flowers!

Linking my lemon coat to Nancy's Fancy Friday!
Posted by Polyester Princess at 19:33