In the weekend before last temperatures soared to Summer heights.

They had been on the rise since a couple of days, as if to ease us gently from Spring into Summer, when suddenly they were turned up to full volume, reaching the high twenties by Saturday.

It was the First of June and, while Summer hasn't officially begun in the astronomical sense, it does mark the start of meteorological Summer. And oh my, did it start with a bang! 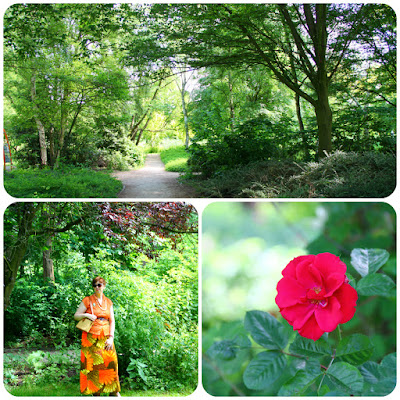 Enticing us with the first of the velvety red roses, the park near our favourite charity shop was beckoning us to come in and stroll along its shady paths.

Birdsong floated down from the leafy canopies and summertime pollen triggered itches and sneezes. 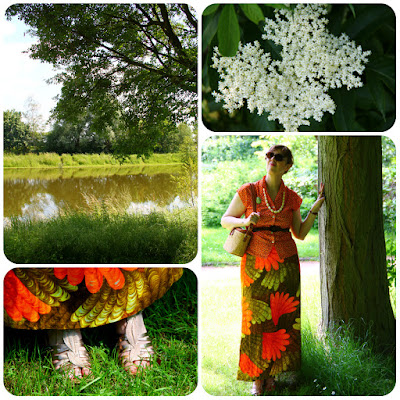 I'd picked up the maxi skirt I'm wearing here just days before at Think Twice, one of a bagful of € 4 sales bargains. It's handmade and the fabric suggests curtain couture, and isn't that print fabulously suited for a Summer's day?

And look: bare feet and sandals! No close-up of my badly painted toenails, though. I'm such a Clumsy Fingers in that department. 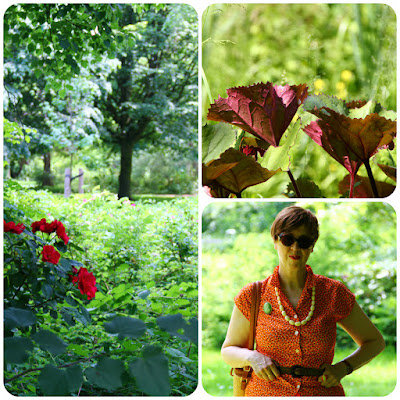 I shopped my wardrobe, as they say, for the vintage orange cap-sleeved blouse, with its melange of black, white and peachy spots.

A pale green cameo brooch was pinned to it, and I added a string of carved, ivory coloured beads and a brown moc-croc belt with a tortoiseshell buckle. 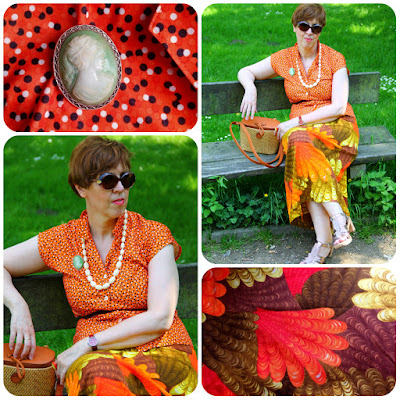 The only retail items I'm wearing are the sandals, snapped up in last Summer's sales, and the basket bag, which was an impulse buy from a high street pop-up in Antwerp. No regrets, though, as it's fast becoming my most worn bag.

The frames of my sunnies, on the other hand, are the bargain of the century. They are from Rodenstock, and I found them in a charity shop for € 0,50 back in 2013. I had them fitted with prescription lenses and they are still going strong after six years! 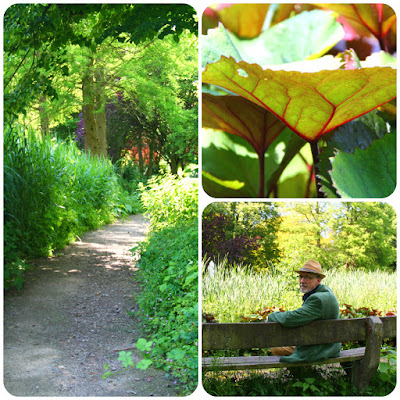 The thermostat was cranked even higher on Sunday, when the mercury climded to the mid-thirties.

The heat which was trapped within the walls of Dove Cottage's garden drove us inside, but rather than succumb to indolence, we racked our brains for a cool place to escape to. 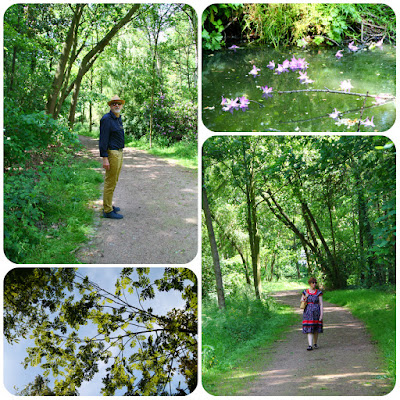 Once again, the park in Boom, which is only a 15-minute drive away, came to our rescue.

As Thursday had been a public holiday, and lots of people had Friday off as well, most of them must have flocked to the seaside, so that we had the park virtually to ourselves. We even found a parking space in the shade. 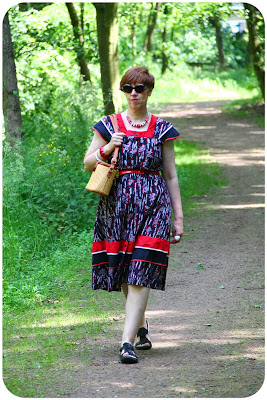 Boom's delightful town park, all of 27 hectares, used to be part of a larger wood which, in 1925, was turned into a park. 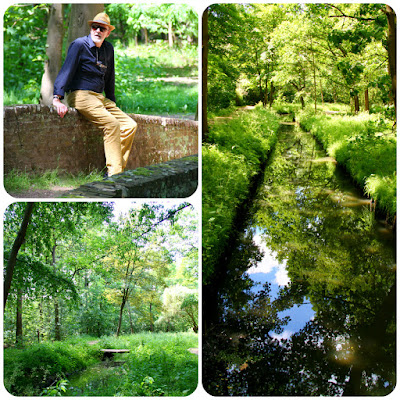 It is triangular and shape and laid out along the banks of a brook, the Bosbeek (beek is Flemish for brook), which meanders through it. 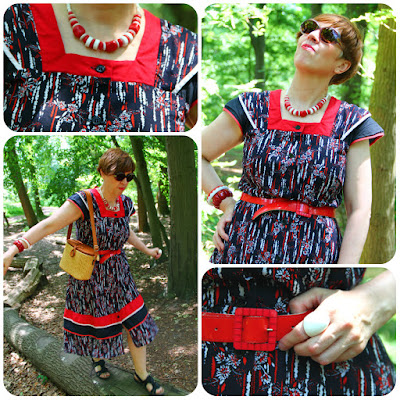 The cotton 1950s Summer dress was another one from that week's Think Twice bargains.

It's still a bit wrinkly, as I'd washed it but couldn't muster the energy to iron it. Still, I was adamant to give it its first wearing, as it was perfectly suited to the weather.

I added a red vinyl belt, a red and white beaded necklace and a couple of plastic bangles in similar shades. All accessories charity shopped, except for the white plastic ring, which is an old retail buy. 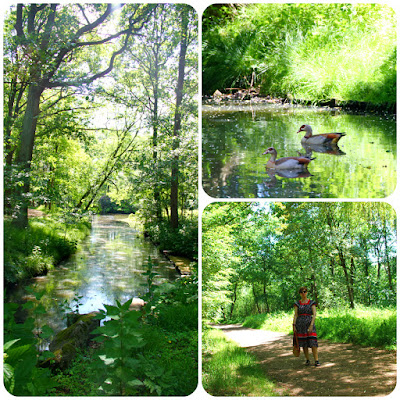 The brook's water is quite murky in places, its surface milky and opaque, which made the ever-changing mosaic of light and shade created by the gentle breeze confuse eyes and camera lens alike. 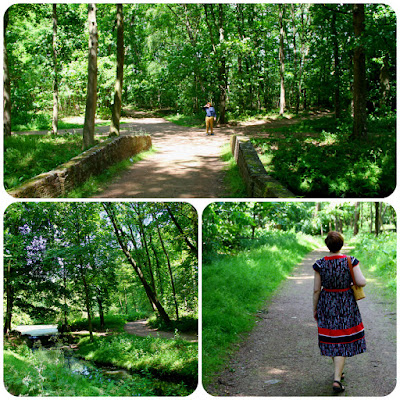 Several paths converge at a clearing. Now which one shall we take? And do we need to leave a trail of breadcrumbs to find our way back?

It's early Summer, and the trees have donned their best verdant hues, while the grass verges still have a freshness they will have lost in a month or so. 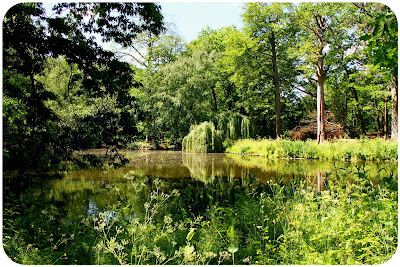 The brook ends in a series of pools, where the water is like a freshly cleaned mirror, shimmering in the haze of the afternoon. 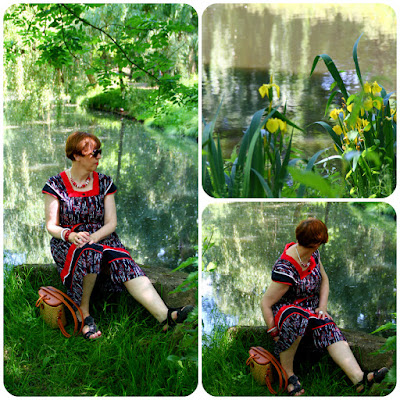 Circling it and arriving at the brook once more, we crossed a bridge to return along the other side.

But first it was time to rest my feet while reclinng like Little Mermaid on a rock at the water's edge, with the pond a dream-like mirage behind me.