The promise of Springtime

Ah, the first flowers of Spring! Those bashfully nodding snowdrops, the trees and shrubs clad in delicate blossoms and the daffodils with their frilly petticoats! Nothing bashful about them, that's for sure!

Nothing bashful about Dove Cottage's first Spring flowers either.

Many years ago, in a moment of madness, we planted a climber to grow through our lilac tree.

The climber in question is Clematis armandii, also known as evergreen or winter flowering Clematis. In our garden, the first flowers usually start appearing in March. It is a vigorous evergreen climber with long, leathery and glossy dark green leaves and clusters of creamy white flowers. 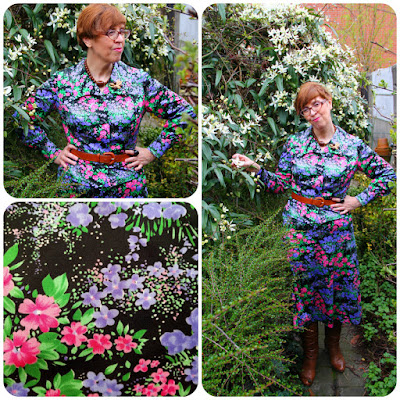 For the first couple of years, the plant presented us with only a handful of flowers. But ever since Jos started pruning it back rigorously after flowering, as the poor lilac tree was buckling under the climber's weight, more and more flowers appeared each Spring.

Now, there are literally hundreds, and their sweet almond scent, which carries far and remains trapped inside our garden walls, is quite intoxicating, especially on a warm, still day. 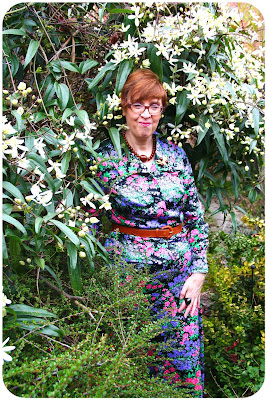 Trying to compete with this profusion of flowers may seem like a daunting task, but it's nothing my flower power wardrobe can't handle.

I dug out this lightweight skirt suit which was charity shopped back in 2015, its dense floral print not one for shrinking violets. There's no label so I suspect that it was handmade, and it's fully lined, producing a satisfying swish-swish sound while prancing around in the garden. 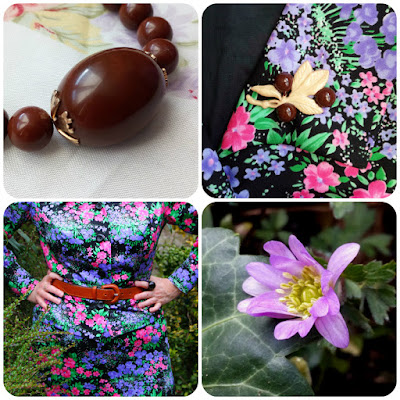 A caramel belt was added to define my waist, and I added chocolate beads and a brooch with cream leaves and chocolate berries.

Although not a patch on the Clematis flowers, this coy little Anemone managed to grab my attention by peeking out from the rampant ivy leaves it is surrounded by. 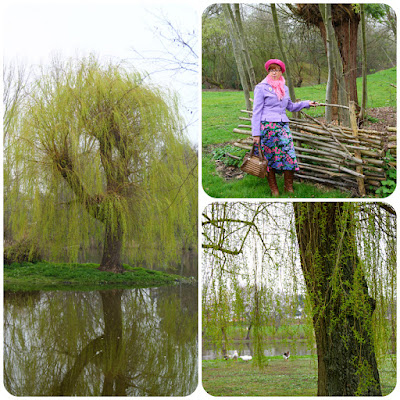 It was the Saturday before last and, after a couple of gorgeous Spring days, the sun had decided to play hooky once more.

After a quick dash to the charity shops, we made an equally quick tour of the park, which seems to be getting greener by the minute, the weeping willows sporting hazy curtains of golden green. 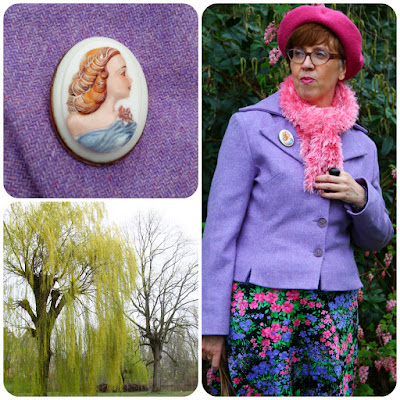 Tired of my Winter coats and jackets, I tempted fate by wearing my lilac tweed jacket which I picked up at Think Twice in the Autumn of 2017, pinning a celluloid cameo brooch to its collar.

My raspberry beret and fluffy pink scarf, which were flea market and charity shop finds respectively, complimented the flowering currant bush with its drooping clusters of pink hued flowers. 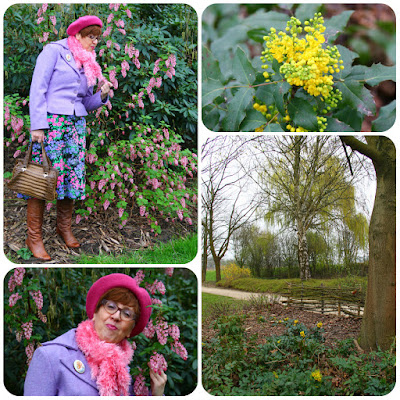 A bright blue sky greeted us on Sunday, and the sun was out in full force, as if she had to make up for her absence on Saturday.

Although it was still a bit windy, the day was definitely too good to be wasted inside, so we ventured out for a short walk in one of our favourite parks, Middelheim. Those of you who have been following by blog for a while might remember that this is not just an ordinary park, but includes an open-air museum of sculpture. 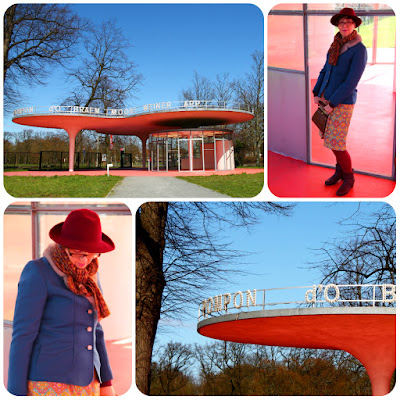 We entered the park through its east entrance, passing through this simultaneously futuristic and retro looking structure. Its three slender pillars rise up into a three-fold, mushroom-shaped canopy, which seems to be inspired by those iconic 1950s petrol stations. The names of some of the artists whose work is represented in the museum are incorporated in the canopy.

This is, in fact, one of the museum's works of art, which is called Artiesteningang (Artists' Entrance), by John Körmeling, a Dutch artist who occupies the no man’s land between architecture and art. 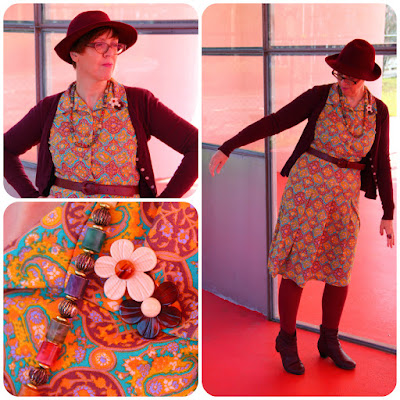 I was wearing a long-sleeved frock I bought during Think Twice's latest sales days, at the same time as the green dresses I've shown you in one of my previous posts, but which I didn't tell you about as I knew I would be wearing it very soon.

Here's a close-up of its psychedelic print, which includes red, orange, lilac, turquoise and burgundy, the latter of which I repeated in my cardigan, belt, opaques and boots. The multi-coloured beads were a flea market find many years ago, while the cream and tortoiseshell flower brooch was charity shopped. 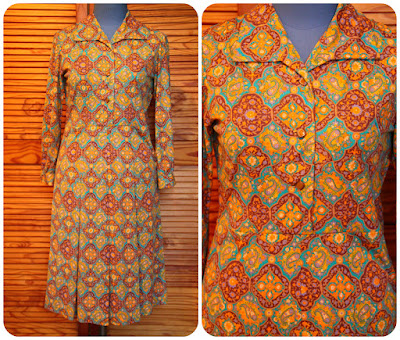 We meandered through the park, our itinerary decided by our mood and the fact that some parts of the park were closed off as a result of the recent storms, which had made quite a few hapless victims among the park's ancient trees. 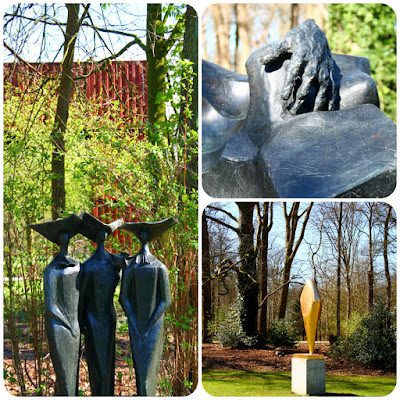 The red container you can see behind them is also part of a work of art, by Belgian artist Luc Deleu. 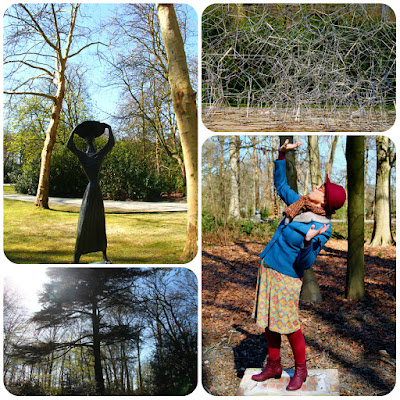 My own hat was a last minute addition to my outfit, as I'd left the house hat-less, and this one happened to be in the car.

You've seen it, and the teal jacket, before. I've been wearing that jacket a lot lately. Teal really is a surprisingly versatile colour. 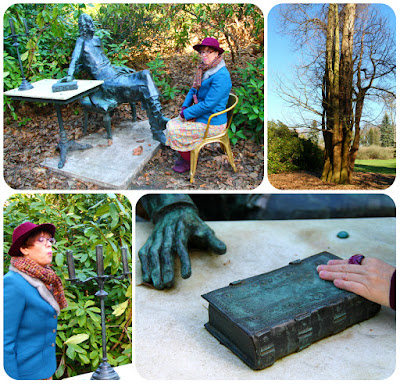 I briefly joined the Professor (1969), a creation of Hungarian sculptor Imre Varga. After talking about poetry and the meaning of life, we shook hands, and I left him to his peace and quiet, blowing out the candles which had been burning rather pointlessly on this sunny Sunday afternoon. 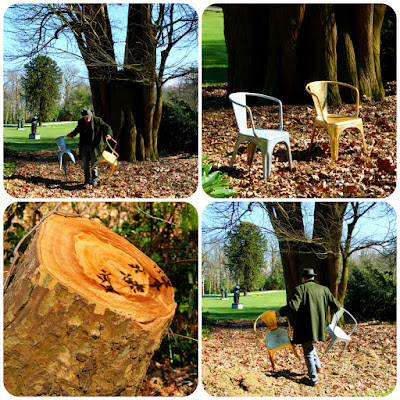 Then we pulled up some chairs made of silver and gold, and sat in a sunny spot watching the world go by until it was time to go home.

Linking my pink and lilac outfit to Nancy's Fancy Friday linkup!
Posted by Polyester Princess at 19:35