A walk in the woods

After being plagued by April showers all week, it was a relief to be able to sample the delights of Spring on the Saturday before last.

Such a gorgeously sunny day it was that I was prompted to wear white, which is practically unheard of. Well, not plain white, obviously. I confess to not even owning any plain white garments. I do have several white, printed Summer frocks, though, which at the time of writing are still stashed away in the linen chest which holds my out-of-season clothes.

I also have a handful of long-sleeved ones, which for some reason I've been utterly neglecting. Trawling my blog, I could only find two occasions when I was wearing such frocks (here and here). 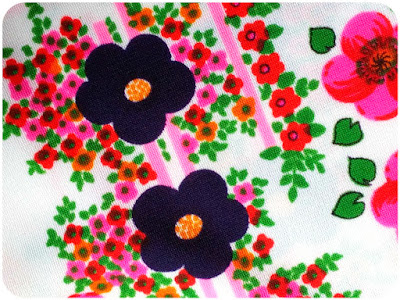 But let's get back to that Saturday morning. Standing in front of my wardrobe, I was feeling a bit bored with most of what I saw: that end-of-season boredom which happens twice a year, regular as clockwork, in April and October. Then this delicious print caught my attention.

I fell head over heels for this handmade dress at Blender Vintage Shop at the end of 2013. Gingerly lifting it from a rail full of colourful vintage attire and taking it into the fitting room with some trepidation, I squeed with utter joy when it turned out to be a perfect fit. 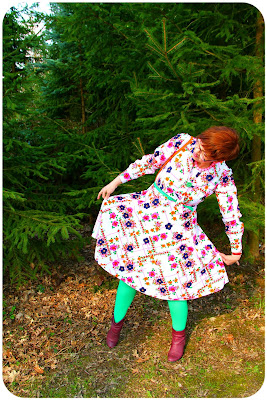 That Saturday morning, I decided to give the dress another outing, as it matched my mood and the weather perfectly. I love its fit and flare silhouette, with its wide circle skirt, which was made for ... yes, you guessed it: twirling! 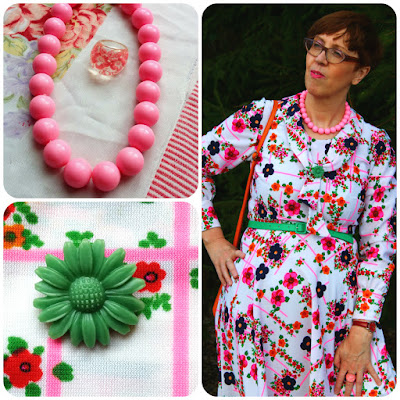 My first thought was to accessorize it with pink, but after adding my pink beads and a translucent ring containing pink flowers, I thought adding more would make it too sugary. So I went for green, starting with green opaques, then a slim green belt.  The dress's shawl collar ends in a fiddly little tie, which I secured with a green flower brooch. No harm in adding more flowers, is there? The brooch is modern, bought from a small shop in Antwerp. 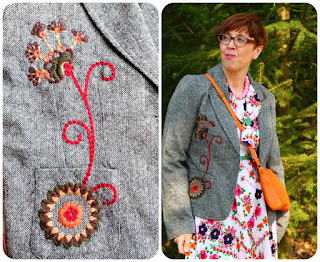 There was no need for a hat or scarf and indeed I could even have left my jacket behind. The jacket in question, a grey tweed one, was charity shopped last October, and has embroidery down one side. My orange leather bag was a sales bargain earlier last year.

We are always looking for new-to-us walking areas not too far from home and, after we were told about a small nature reserve in a neighbouring village, called the Uilenbos (transl. Owls Wood) by my godson, we were eager to go out and explore it. 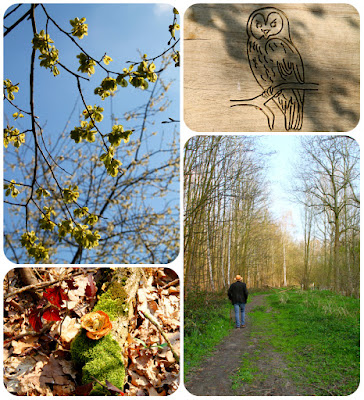 However, it took us quite a while to find the reserve's entrance and starting point for the two walks which have been lead out, as it wasn't very clearly signposted. Eventually, after getting directions from a fellow walker, we found it and, leaving our car in a grass verge at the side of a rather busy road, we finally set off. 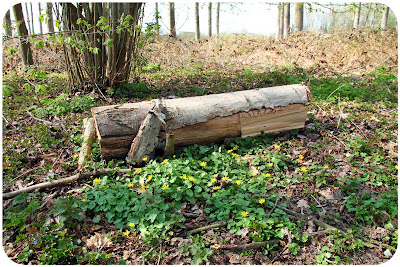 Bees were busy visiting the yellow flowers of lesser celandine, a flower which William Wordsworth (he of the host of golden daffodils!) seemed to be fond of, as he wrote no less than 3 poems about them!


Pansies, lillies, kingcups, daisies,
Let them live upon their praises;
Long as there's a sun that sets,
Primroses will have their glory,
Long as there are violets,
They will have a place in story:
There is a flower that shall be mine,
'T is the little Celandine.
From To The Small Celandine, 1802-1807 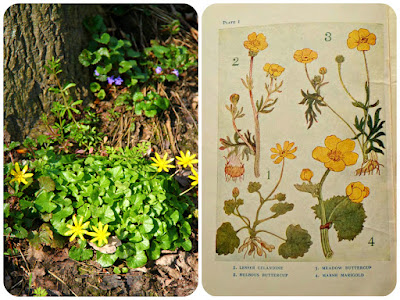 Some may consider this a weed and it is indeed quite invasive, but as it's one of Spring's earliest flowers, it's hard to find fault with so much yellow cheerfulness! 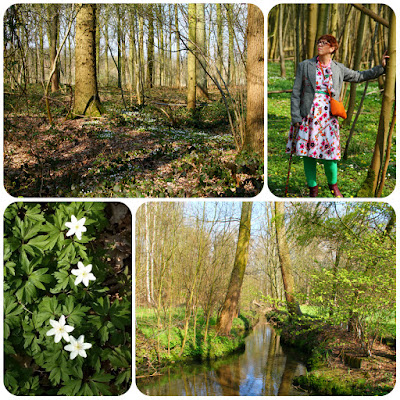 Venturing deeper into the reserve, the magical sight of hundreds of wood anemones caught us by surprise.

A spring delight, the wood anemone grows in dappled shade in ancient woodlands.In spite of their innocent and fragile appearance, these star-shaped flowers spreading like a veritable galaxy across the woodland floor, are quite poisonous!

The botanical plate featuring the wood anemone (below), as well as the one featuring the lesser celandine (above) were both taken from this delightful flower book found at a UK charity shop during one of our holidays. Although no publication date is mentioned, there is a handwritten dedication inside, dated Christmas 1942. 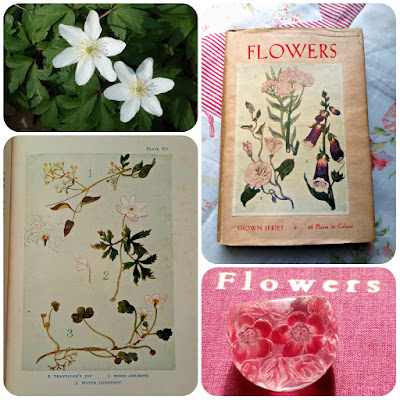 Uilenbos is a recent acquisition by Natuurpunt, which is the  the largest Belgian nature conservation organization, and was opened to the public in the Autumn of 2017.

The small reserve of 17,5 hectares consists of two thirds of dry oak and beach wood and one third of wet woodland intersected by a quietly gurgling brook. 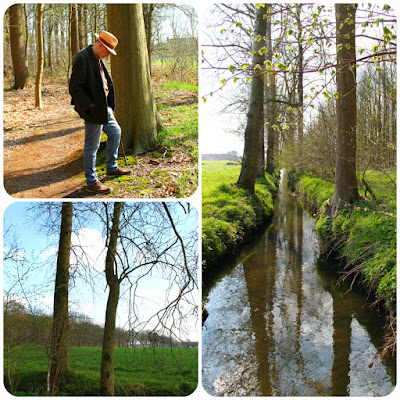 The area is of high natural value as it is the habitat of several rare species of plants and birds, including at least 5 species of woodpecker. I couldn't find any mention of owls, though ...

The wood's dense undergrowth of bracken is the perfect hiding place for the resident population of deer, who come here to give birth to their fawns in May. Hence, part of the reserve is off-limits between May and August. 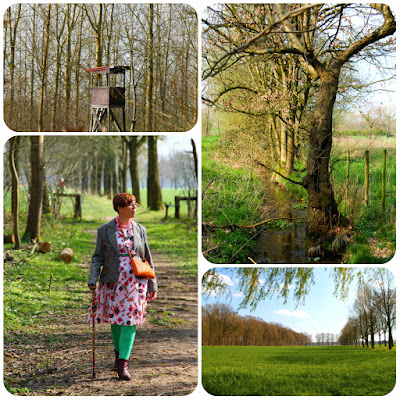 We walked our own combination of the two available paths, enjoying being out and about on such a glorious day, taking in the sights, sounds and smells of early Spring.

As we'd forgotten to take a bottle of water, we were gasping for a drink by the end of our walk so, on our way home, we stopped for a well needed cup of coffee at a nearby charity shop, which has the added bonus of a small café. 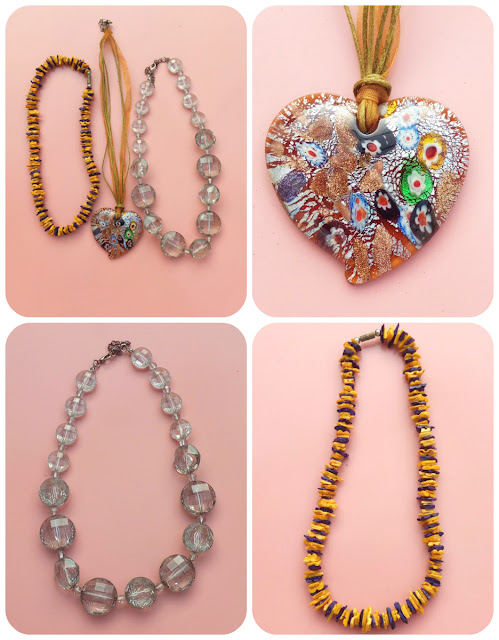 And since we were in a charity shop, it wouldn't hurt to take a look around, would it?

I only struck gold on the jewellery front though, taking home these three necklaces. I'm particularly enamoured by the heart shaped pendant, which is made of glass and looks like a slice of one of those Millefiori paperweights.

But I still have to show you the previous week's finds as well, starting with a camera, in its original packing and accompanied by its instruction manual, for our vintage camera collection. A remnant from the Retrodag, its price was reduced to € 3. 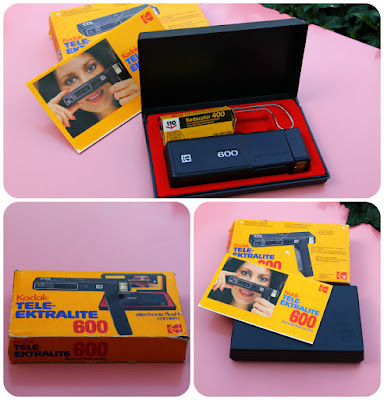 The Kodak Tele-Ektralite 600 pocket camera has a folding cover that becomes a handle when you use the camera, with ability to switch from normal to tele lens. It was manufactured between 1980 and 1982.

The set still contains the Kodacolor 400 film which came with it, but unfortunately the box mentions that it has to be developed before September 1982! 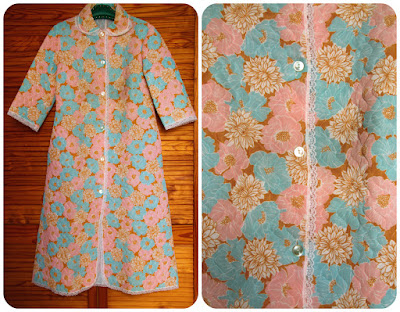 In spite of the fact that I already own several vintage quilted dressing gowns, there's always room for one more, especially if it's in as pristine a condition a this one. 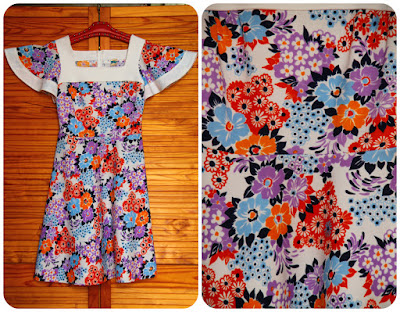 Last but not least! I still can't get my head around the fact that I missed this vintage Diolen dress on the Retrodag itself, but here it was hanging among the other remnants.

The Summer frock has got the most delightful floral print and a deep square neckline edged in white. But its most outstanding feature must be the jaw-dropping angel wing sleeves! Obviously I can't wait for the perfect Summer day to wear it.

I had to tape the sleeves to the wardrobe doors in order for you to fully appreciate the size of them!

Linking to Patti's Visible Monday at Not Dead Yet Style and Mica's Weekday Wear Linkup.