Away from it all

We'd planned the perfect getaway. At least, that's what we thought! We'd booked a mid-week break at Het Soetewater, a B&B in the rural area around Bruges, leaving on the Tuesday after the Easter school holidays in Belgium. In addition to avoiding the worst of the crowds, this would give us a head start, using the long Easter weekend - my office closes on Good Friday as well as Easter Monday - to pack and generally get into holiday mood.

But, as is often the case with the best laid plans, it didn't turn out quite like we'd imagined.

Our new neighbour, who has bought the house next door which had been empty for years, chose the Easter break to completely renovate his roof down to the roof-beams. Being highly sensitive to noise at the best of times, this came on top of weeks of ongoing renovations at my office building.

It's a good thing the weather was gorgeous, so that we could make our escape for a couple of hours, but still my nerves were frayed by the end of each day, and blogging or reading required the aid of some white noise, found on YouTube, played through my headphones. 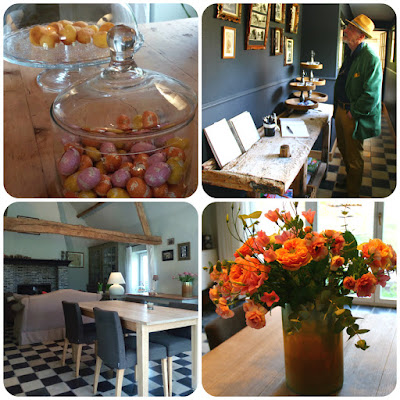 Needless to say, we couldn't get away fast enough on Tuesday, and after an hour's drive, by early afternoon we were happy to find ourselves in a completely different, and mercifully quiet, place!

It was our second stay at this delightful B&B, as we'd been staying there courtesy of Jos's children last year, and we were welcomed by our hostess, Veronique, with a cup of coffee and home-made cakes. Not to mention a choice of scrumptious mini chocolate Easter eggs, a huge glass bonbonnière of which was at our disposal in the cozy breakfast/sitting room, and which I confess was virtually empty by the time we left. 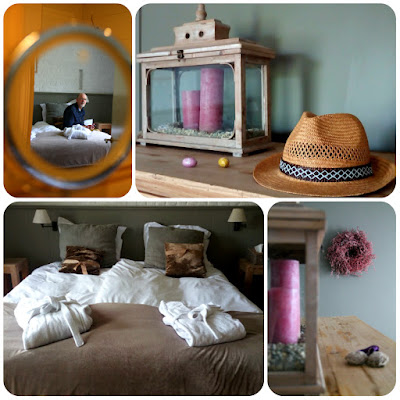 Housed in what used to be the barn belonging to Veronique's parents' farmhouse, our room was comfortable and spacious as well as tastefully decorated, with the equally spacious but cosy bathroom having the luxury of both a huge bath and a shower. 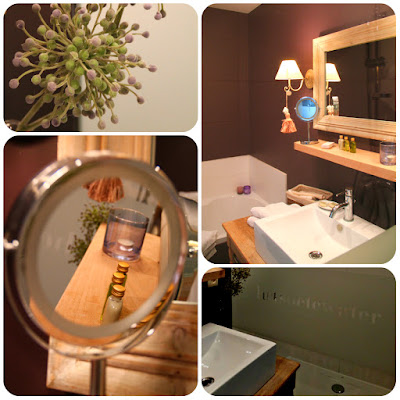 Having re-acquainted ourselves with our surroundings, it was time for a first outing to Bruges.

It was mid-afternoon by then so, rather than using the cheapest parking option at the station, which includes free public transport to the city centre, we made use of a huge, underground car park in a central location situated a mere stone's throw from all the main tourist traps attractions. 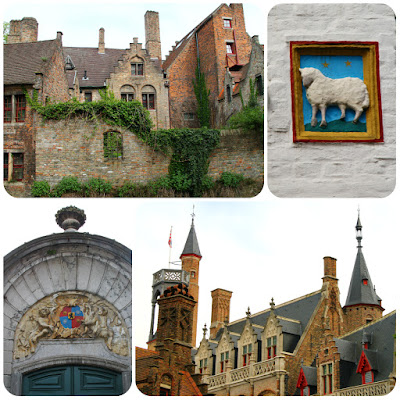 We had no itinerary but to wander around this magical, dreamlike city, which even after several visits didn't fail to captivate us.

Wanting to avoid the crowds, we immediately veered off the main shopping street leading all the way to the Markt, the epicentre of all things touristy, opting for narrow, cobbled back streets off the beaten track, until we reached the busy Dijver canal. 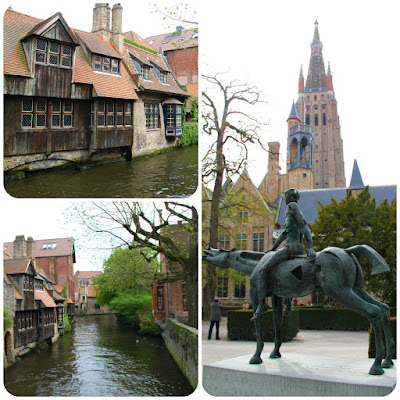 Not quite ready to face the crowds just yet, we entered the picturesque courtyard garden belonging to the 18th century Arentshuis Museum. The garden contains an arrangement of bronze sculptures called The Four Horsemen of the Apocalypse, the works of Belgian sculptor Rik Poot, and created between 1981-87.

One of Bruges' picturesque canals virtually runs underneath the building and through the garden, with a constant stream of canal boats taking tourists on 30-minute boat trips along the city canals. It's quite a feat to photograph this fairytale like stretch of canal without one of these boats marring the view! 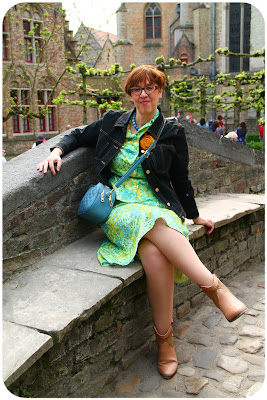 In the corner of the courtyard, there's an eternal bottleneck created by a tiny hump backed bridge, or rather, by the selfie-stick wielding masses intent on taking their picture on it.

The ancient looking Bonifacius bridge dates from early 20th century and is one of Bruges’ youngest bridges, a fact that most people seem to be blissfully unaware of.

By some stroke of luck, there suddenly was a gap in the crowds, so that I too could have my picture taken there. Snap! Jos had to be really quick, though. 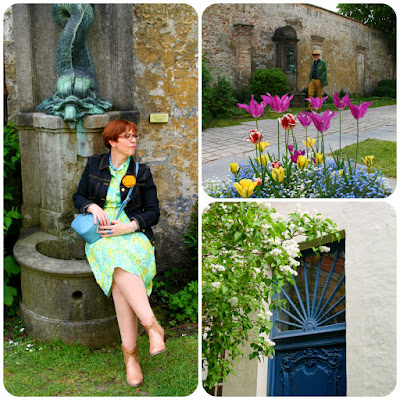 A note about my outfit. It was a gorgeous, yet slightly windy day, so I wore my dark denim jacket with a yellow felt flower pinned to it, over a vintage, flower sprigged two piece, accessorized with a mid blue belt and beaded necklace. My emergency booties (see here) must be one of the most comfortable pairs I've ever worn. And enter my new zipped-top cross body bag, which turned out to be the perfect travelling companion.

We meandered through the garden of the Groeninge Museum, which offers a varied overview of the history of Belgian plastic arts, to re-surface once more onto the crowded Dijver canal. 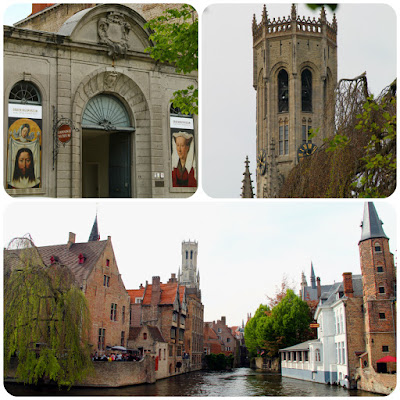 A short walk brought us to one the most photographed spots in Bruges, the picture postcard perfect Rozenhoedkaai.

I was able to snap around the many canal boats again, but note the mass of people queuing for boat trips on the left, just to the right of the weeping willow.

The tall tower just off centre belongs to Bruges' iconic belfry, a close-up of which you can see on the top right. 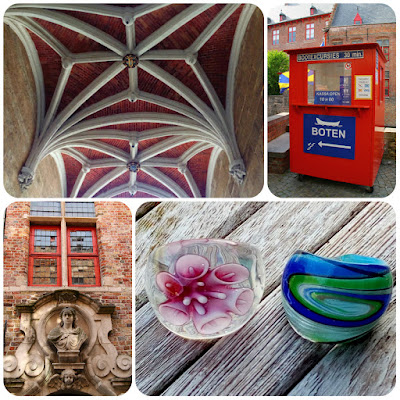 Here, the crowds are virtually unavoidable, so, taking a deep breath, we dived in and made our way past the boat tours' ticket office towards the Vismarkt (Fish Market) from where a narrow alley would take us under an archway to Bruges' most opulent square, the Burg.

Among the hustle and bustle there was a stall selling stunning fused glass jewellery, where I succumbed to these two rings. 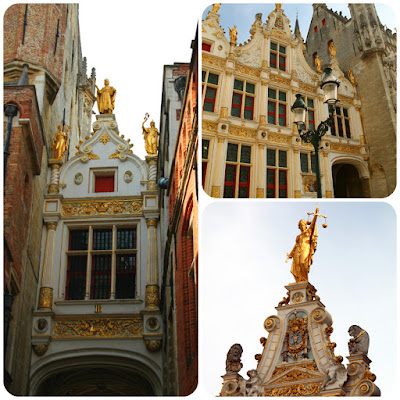 The weather was in stark contrast to last year's, when we visited the Burg on a grey and rainy day.

Now, a blue sky with fluffy white clouds was the backdrop to the square's collection of stunning buildings vying for attention.

The gilded reliefs and statues adorning the Brugse Vrije (Liberty of Bruges) glinted in the sunlight, crowned by the blind-folded statue of Lady Justice balancing her scales. This was the place from which independent magistrates exercised jurisdiction over the region from the late Middle Ages until 1795.  It later served as the Court House and today it houses the city council administration. 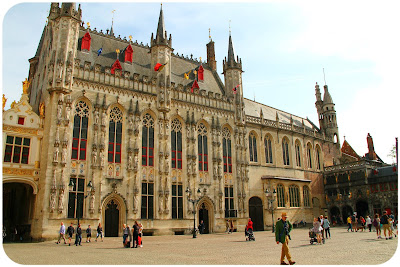 Next door is the awe inspiring gothic City Hall, its facade clad with statues representing the Counts of Flanders and biblical figures. It was built in 1376, making it one of the oldest in the Low Countries. 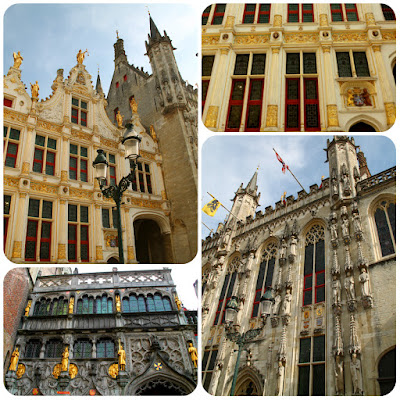 The low, dark building tucked away in the corner is the Basilica of the Holy Blood, which is famous for a crystal vial reputed to contain a drop of Christ's blood brought back from the Holy Land in 1149. The facade of the basilica with its three arches and gilded statues was erected between 1529 and 1534. 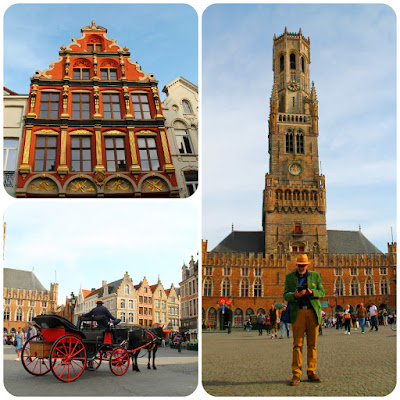 Leaving the Burg, we finally made our way towards the Markt, lured by the siren call of the tall belfry tower, which is Bruges' most distinctive landmark. The 83-meter-high belfry is one of the finest bell towers in Belgium. Construction of the tower, which still contains a carillon of 47 bells, began in 1282, and the crowning octagonal upper section was finally completed in 1482.

At the Markt, those tourist who haven't succumbed to a boat trip, are persuaded to fork out for a ride through Bruges' historic winding streets by horse-drawn carriage.

Pangs of hunger dictated that we search out a place to eat. Our favourite among the many cafés lining the square turned out to have its closing day, so we reluctantly selected another, joining the throngs of tourists, while soaking up the historic splendour around us. 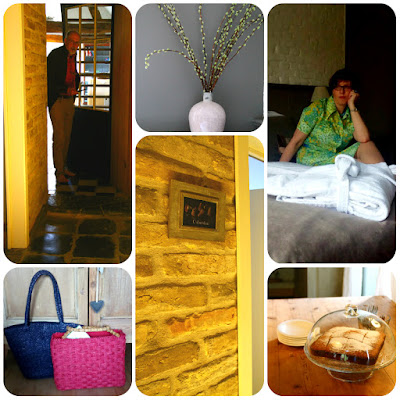 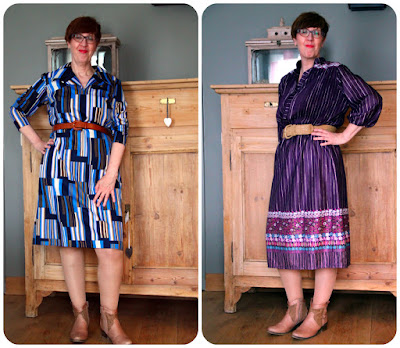 But not before showing you the two frocks I found at Think Twice, which we happened upon quite by chance. Yes, really! I'm sure you'll agree that, with prices down to € 2 that day, it would have been silly not to buy them.

I hope you'll join me for the continuation of our travel adventures in my next post!

Linking once more to Patti's Visible Monday at Not Dead Yet Style!