All's fair at the castle

During two weekends a year, in Spring and Autumn, Castle de Renesse is the romantic setting for a small antiques fair, which we have been visiting for quite a few years now.

The castle is located in the sandy soiled and pine rich countryside to the north of Antwerp, just over half an hour's drive away. 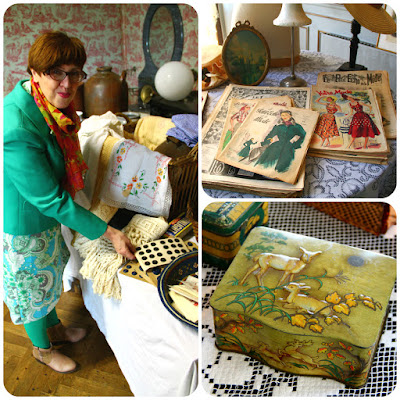 Landscaped gardens and parkland complete with a picturesque lake and a couple of smaller pools surround the castle, blending seamlessly into ancient woodland.

As quite miraculously we always seem to have the weather gods on our side on our outings to the castle, an hour's browsing of the stalls set up in the castle's rooms is usually followed by a picnic and a meander through the castle grounds and beyond.

On the first Sunday of April, the weather gods were more than compliant, with lots of sunshine and temperatures of up to 20° Celsius. 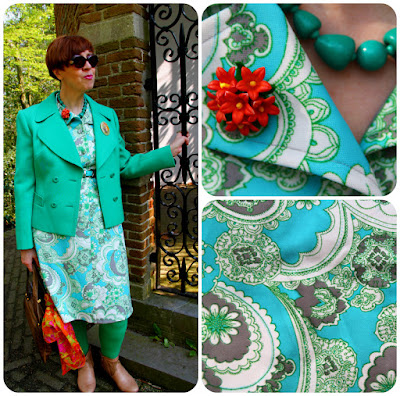 I very daringly opted for short sleeves, choosing a turquoise Crimplene frock with a groovy cream, green and grey print. For contrast, the dress's collar was adorned with a posy of cheerful orange flowers, but indulged some matchy matchy-ness by choosing green beads and a turquoise belt.

Green opaques balanced the outfit, and my feet were more than happy in the emergency booties I was obliged to buy a couple of weeks ago.

As I was mentally going through my jackets for the perfect one to wear, I was reminded of a green new wool suit I bought at a vintage market several years ago. Its jacket turned out to be the perfect match, even if, combined with the sweat-inducing Crimplene, it would be much too warm later in the day. 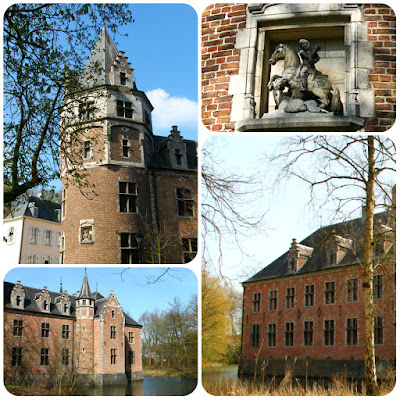 Making our way to the bridge which would take us to the castle's courtyard, we were disappointed to see that scaffolding had been erected, spoiling the enchanting view of the castle and its reflection in the moat.

It's a good thing we'd been there before, so that I could pinch some of the photos I'd taken on previous visits for you to admire. 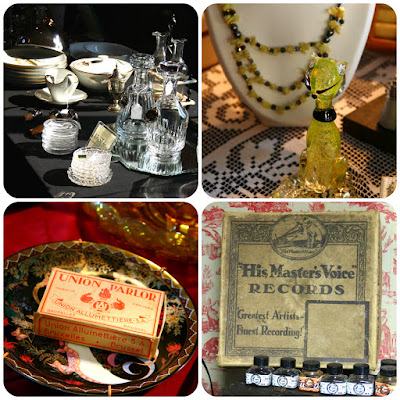 Against the faded grandeur backdrop of the castle's interior, all manner of delectable objects are displayed, many of them with a price tag well beyond our budget.

However, there are still enough reasonably priced goods on offer for us to return year after year.. 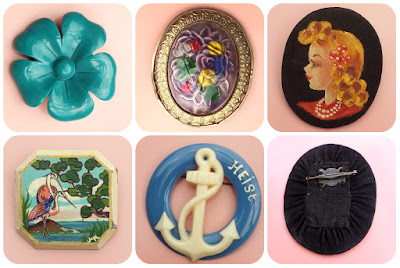 Following her absence last Autumn, we were relieved to see that the Brooch Lady was once again presiding over her folders of brooches. As she's well into her 80s we were more that just a little bit worried. It turned out that she'd taken a fall back then, but had now sufficiently recovered to take up her pitch at the castle again.

These are the five brooches I bought from her.

The brooch on the top right dates from the second world war. It is handmade and the beautiful lady with her 1940s up-do and string of pearls is painted directly on a piece of fabric. Below, on the bottom right, you can see how the brooch's back has been constructed.

The plastic anchor brooch is a souvenir from a Belgian seaside resort. 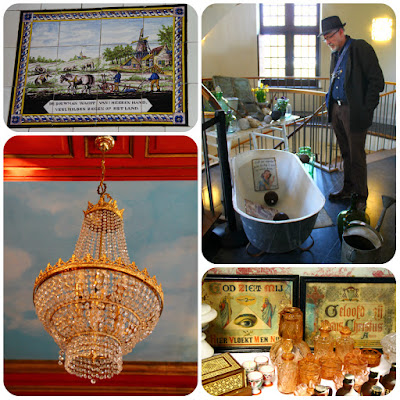 By lunchtime, we picked up our picnic basket from the car, and made our way to the one and only picnic table in the vicinity of the castle.

It offers a fabulous view of the castle across the lake but, as even from this distance the scaffolding was all too prominent, no photographs were taken this time, except for the sunbathing tortoises and the topsy-turvy duck performing its ablutions. 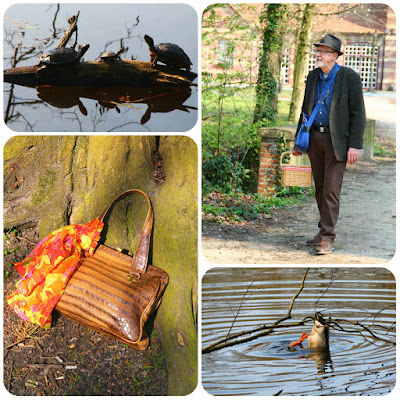 By then, I'd removed the chiffon scarf I was wearing and tied it to my handbag's handles. Do take a good look, as it'll be the last you'll see of it. It was only by the end of our walk that I noticed its absence ... 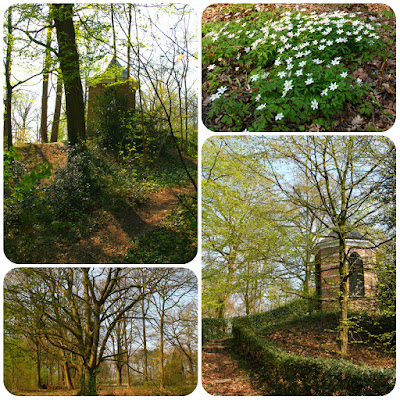 Our walk took us pas the ice house, which has a gazebo built on top of it. This is more of a folly than a real gazebo, as there is no entrance at all.  One can only walk around it and glance through its intricately grilled windows.

The ancient oak tree on the bottom left has been cordoned off to protect it, with the path which used to run next to it diverted to the other side of the picturesque pool you can see below. 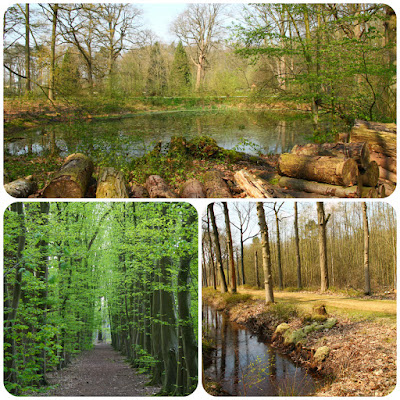 What a joy it was to be walking along this delightful avenue of trees. Clothed in clouds of youthful green, a gentle breeze sighing among them, they seemed to be whispering secrets. 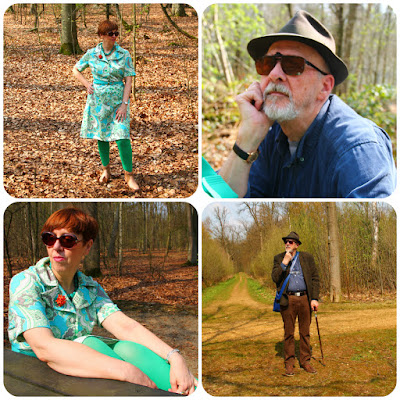 It was while we were taking a break at a picnic table hidden in the woods that I noticed my scarf was gone. I scanned the straight road we had just walked along but to no avail. Back at our starting point, we were both in need of a restorative cup of coffee which, in a mad moment, we decided to accompany by ice cream with hot chocolate sauce. Little did we know that they would be so huge! 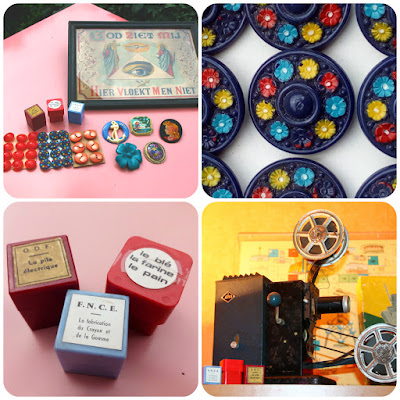 I'll finish by showing you our other finds of the day.

There are always vintage buttons galore at one of the stalls upstairs, and I picked up three cards for my stash. How charming are those navy celluloid ones carved with red, turquoise and yellow flowers?

The mystery objects on the bottom left are tiny boxes containing 35 mm film reels. There was a whole box of them, from which Jos selected these three for our manually operated toy projector. Dating from the 1950s, it was given to Jos by his brother-in-law in the early 1960s. 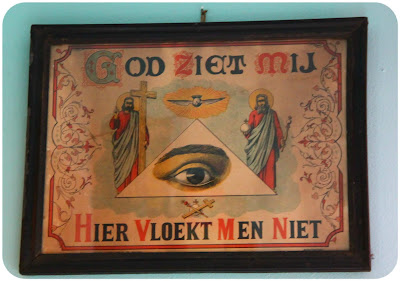 Finally, joining our collection of kitsch is this old religious print. Adorning the mantlepiece of many a Flemish living room back in the day, it admonishes not to swear, as god can see you. As I'm always pointing out to Jos, it doesn't mention that god can hear you, so we're quite safe with this on our kitchen wall.