Who was it again that said April is the cruellest month?  Ah yes, it's the opening line of  T.S. Eliot's The Waste Land. Published in 1922, it is a landmark of twentieth century poetry.


April is the cruellest month, breeding
Lilacs out of the dead land, mixing
Memory and desire, stirring
Dull roots with spring rain.

And although volumes have been written by fellow poets and critics alike on Eliot's modernist masterpiece, the fact remains that, indeed, April can be quite cruel. After the long Winter months, April contains the promise of Spring which, more often than not, it is unable to deliver on. It keeps teasing us with a handful of mild and sunny days, only for it to become cold and wet again, as if to spite us. 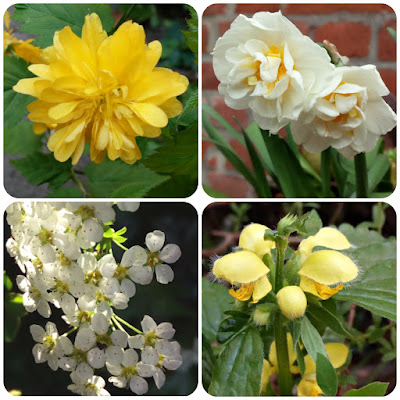 This year, we have been counting our blessings as some of April's true Spring days coincided with the weekend. Take last weekend, for instance, when, miracle of miracles, it turned out to be fine on both Saturday and Sunday. 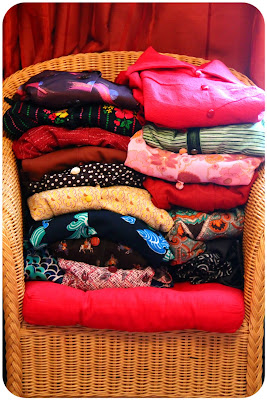 As Sunday was already spoken for, we meant to take it easy on Saturday, but just lazing around wasn't quite what I had in mind. In fact, my original plan was to crack on with my bi-annual wardrobe change-over. The lure of being out and about was too strong, though, so I left the Winter clothes I'd taken off their hangers, ready to be put away in favour of a glut of Summer frocks, piled up on a bedroom chair. There will be rainy days to get on with this task soon enough! 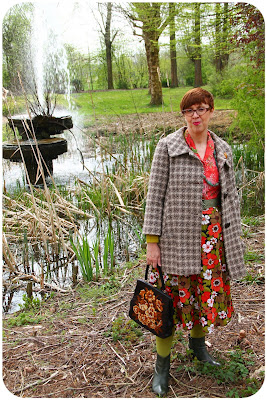 The short, brown and cream checked swing coat I was wearing was charity shopped in February last year. Although it does look deceptively like a vintage 1950s one, it is modern, from Spanish brand Sfera.

It has got a little half belt quite high up in the back, which in the photo below makes me look like the hunchback of Notre Dame. I was, in case you are wondering, getting a pesky stone out of my shoe.

The shoes, or rather boots, in question were a serendipitous charity shop find back in December, found just after I'd given up on my search for boots in this exact shade of green and succumbed to a pair from a regular shop. But not to worry, as I've been wearing both pairs! 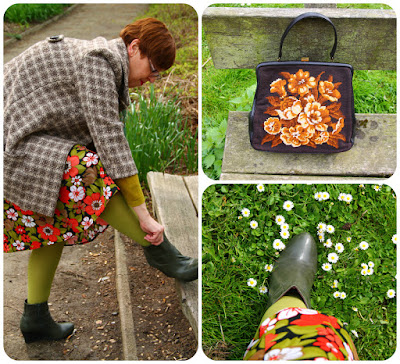 The daisies are back! Oh, how I love daisies in a lawn! They remind me of Summer holidays spent in my childhood garden, camping out in my Dad's scruffy old tent pitched up on the lawn.

Note my lime green opaques and my tapestry handbag in hues of chocolate and caramel. 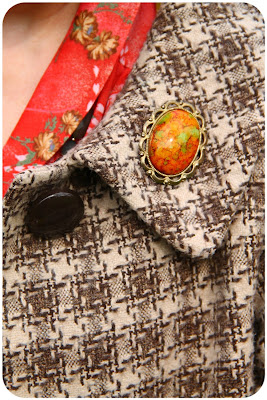 The coat's generous collar called for a larger brooch, so I opted for this one, with its oval orange and green mottled stone. 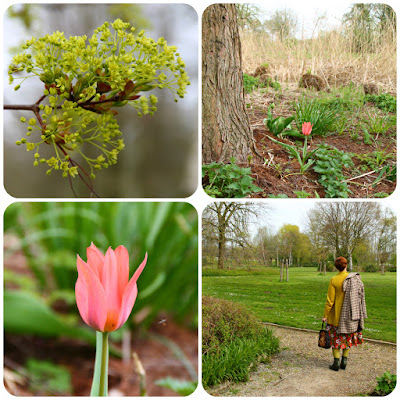 The park is almost literally being transformed before our very eyes. Plants which have lain dormant during the Winter months are one by one receiving their wake-up calls.

Look at that forward little tulip showing off the latest fashion in mellow coral. She and I were wearing similar colours, did you notice? 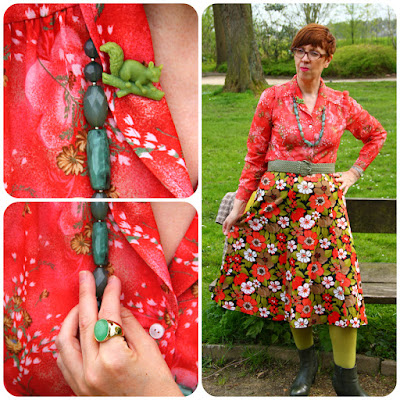 I last wore this crepey blouse, a bargain from Think Twice, on a mild Autumn day, but surely its colour suits every season.

I combined it with the bright floral skirt I picked up at the Retrodag back in March and added a sage green woven belt, a string of jade green beads I bought from H&M eons ago and a gold tone ring with a green stone.

My green squirrel brooch insisted on coming along in the hope of catching sight of its red cousins living it up in the park. 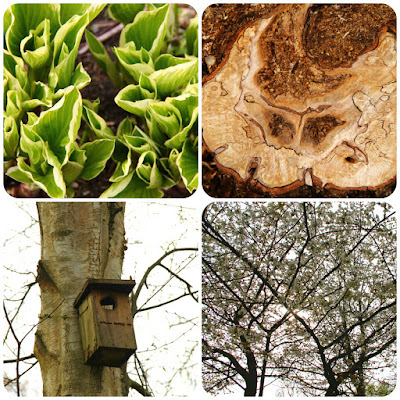 Quick, let's snap the new Hosta shoots before they are being devoured and decimated by the resident population of slugs and snails!

Beneath the frothy white blossoms, several nesting boxes were waiting for lodgers to come and raise their families. 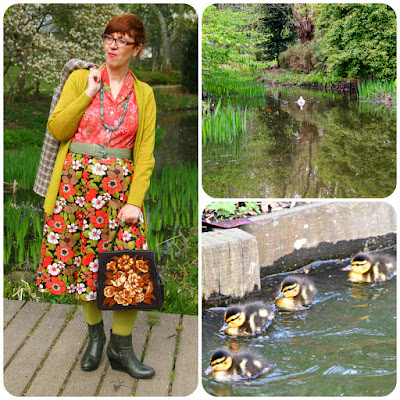 We stood and watched the antics of a clutch of fluffy ducklings out exploring with their Mum. There were a total of five, including a wayward one which Mum had a hard time keeping in check, and which consequently isn't in the picture. 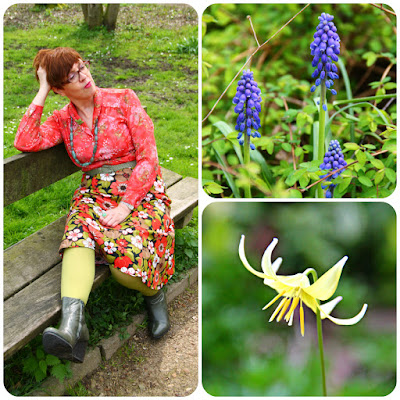 Spring flowers are scattered like gemstones in the park's hidden corners, spikes of grape hyacinths with their tiny blue bell-shaped flowers and a single delicate dog's tooth violet.

I could sit here for hours, watching the flowers grow.

Instead, we sauntered to the charity shop which is a 5-minute walk from the park. 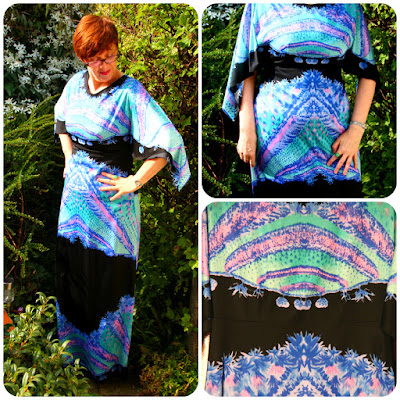 Not expecting to find much, I halfheartedly scanned the rails of tired looking fast fashion cast-offs, when suddenly ... Well, what can I say? How amazing is this vintage maxi? How fabulous is that print? And those sleeves! They make those on last week's Diolen dress pale into insignificance!

The label says Modelly, which I couldn't find anything about. 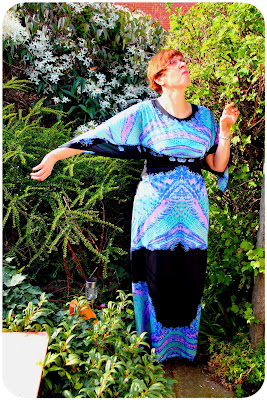 I had to put it on for a photo session when we got home. Here I was just about to demonstrate the ginormity of the sleeves, when I suddenly noticed our neighbour was up on the roof.

I'm sure they all think that we are a bit weird but frankly speaking, I don't give a damn!