If all goes well, by the time you are reading this we are having a little break, enjoying some dolce far niente at a Bed & Breakfast near Bruges.

As I still hadn't finished telling you about the weekend before last, I thought I'd squeeze in one more post and schedule it. After all, it wouldn't do to post about my mid-April adventures well into May! 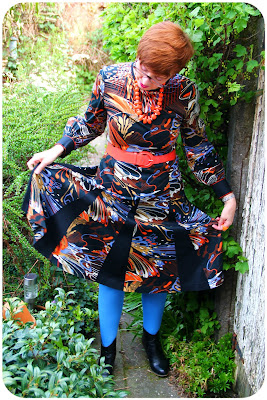 It was Sunday the 14th of April, and the sun which had saved the day on Saturday had packed her bags and gone elsewhere, leaving us with an impenetrable grey sky and a hint of frost.

Out of my between-the-seasons capsule wardrobe, I pulled another long-sleeved frock which was actually well overdue an outing.

Black, with a swirly kaleidoscope print, its plain black cuffs trimmed in orange and with orange stitching at the yoke, it has a close fitting bodice and a flared skirt. 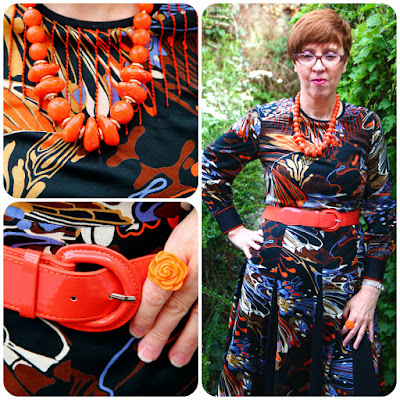 Here, the kaleidoscope print is joined by panels of plain black material, significantly augmenting its swoosh and twirl factor. 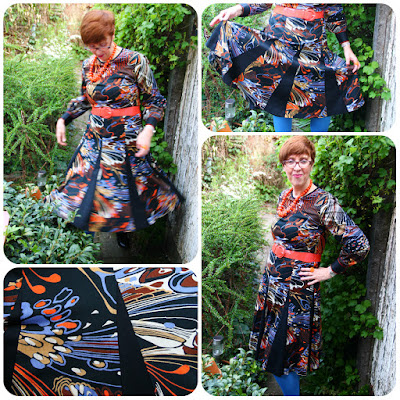 Over the years, the belt, which was an old retail buy and is still a firm favourite, had developed a couple of chips in its buckle. After giving it some thought, my Eureka moment arrived in the cosmetics aisle of the low countries' equivalent of Superdrug. This Rimmel nail polish, called Ora-Ngy Vibe, turned out to be the perfect match! 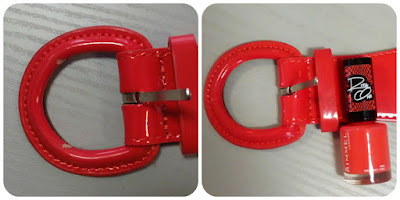 My outfit was completed with blue opaques and cardigan (not shown), while the icy temperatures dictated that my teal jacket with the grey fur collar had to work for its money again.

To tie in with the orange in the frock, I pinned an orange based brooch to the jacket's collar and wore my orange beret. 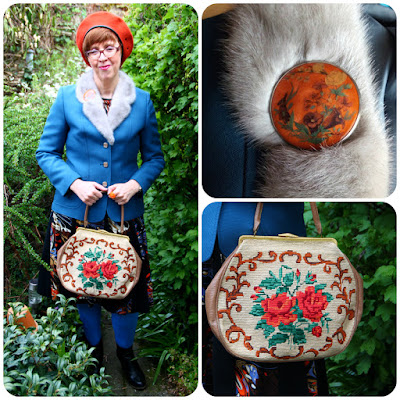 Roses adorn the tapestry handbag which, having featured on the blog before, I'm sure needs no further introduction.

It is big enough for all my essentials as well as some of the smaller treasures we were hoping to find at our destination for the day: our favourite indoor flea market in Mechelen. 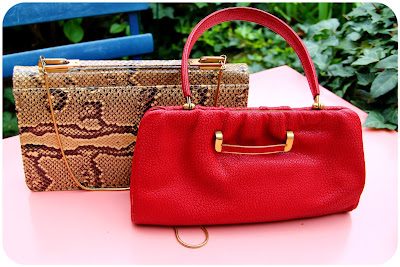 As it happens, we found larger treasures as well. Both of these handbags are vintage and in impeccable condition warranting the slightly higher price tag:  € 10 for the snakeskin clutch and € 15 for the red bag with its unusual closing mechanism. To open it, the tab at the front has to be pulled upwards. 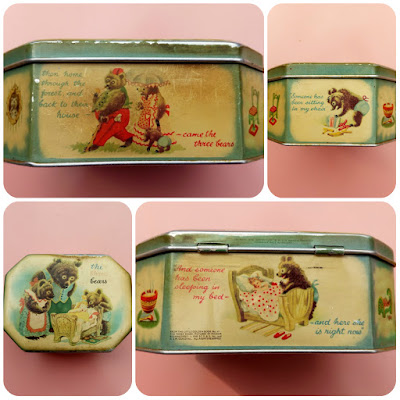 This 1950s tin, depicting scenes from The Three Bears, was picked up at one of our favourite sellers' stall. It is from Belgian chocolate brand Côte d'Or, and usually commands higher prices than the € 10 we paid for it. What's more, the € 10 also included the small wooden trinket box, which you can see in the next collage! 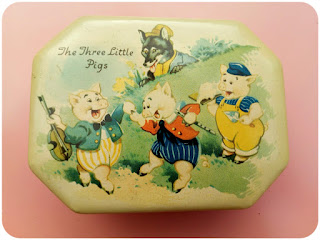 We already own the tin's sibling, displaying The Three Little Pigs. This one is a family heirloom which used to belong to my paternal grandparents, and which has been used to store a set of dominoes for as long as I can remember. In fact, it still has the same domino set inside! 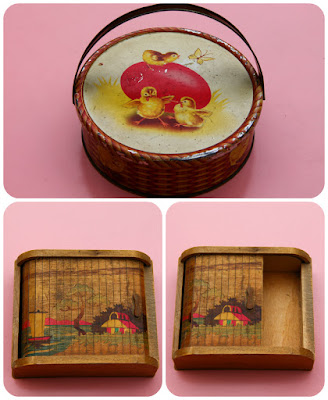 And here's the trinket box I mentioned before. Its roll top cover is intricately painted with a colourful scene.

I couldn't resist the cute round Easter themed tin, its sides decorated to look like a basket. This came from Tanja, another favourite seller, and follower of my blog. 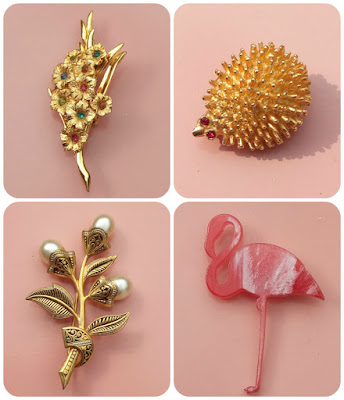 Not too many brooches this time, but still enough to satisfy my collector's hunger. I found the three gold tone brooches at one of the first stalls we looked at. I already have the hedgehog with green eyes instead of red. The flamingo was found in one of the last aisles and no, it isn't Lea Stein! 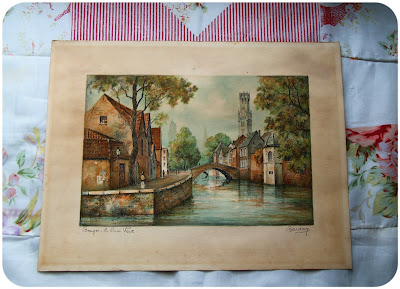 This hand coloured and signed lithograph caught my eye because of its colours as well as its subject matter, a picturesque corner of Bruges. It was ours for € 3. A bit of googling revealed that the artist, Barday, is French, and was active between ca. 1925 and 1945. I came across several of his (or her) original lithographs, the cheapest of which was for sale at $ 60! 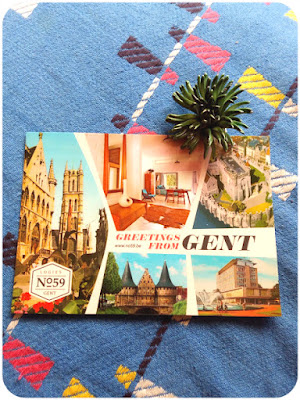 The weather improved steadily during the week that followed, reaching balmy temperatures in the mid twenties by the Easter weekend.

Earlier that week, a package arrived for me from Ghent! It was from the lovely Kezzie, who'd spent a couple of days in Belgium. She sent me a batch of coloured tights she's no longer wearing, knowing I would give them a new lease of life. Also included was a brooch and a lovely greeting card. 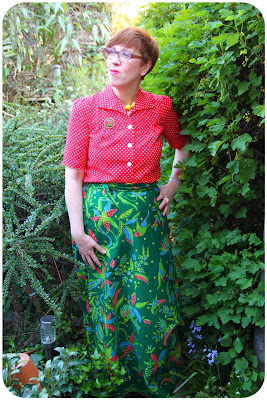 I'm leaving you now with a look at what I was wearing last Saturday to go vintage shopping with my friends Ingrid and Inez.

The maxi skirt was a € 3 Think Twice find from that week. I spent an hour or so on Friday hand stitching the hem which had dropped in several places. The skirt is made from a waxed cotton, marked as Veritable Java Hollandais. I fell head over heels for its crisp and colourful print. 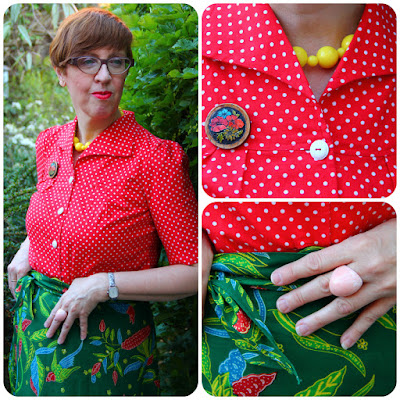 Combined with a red cotton polka dot top, and accessorized with a yellow beaded necklace and wooden flower brooch, it was the perfect outfit for a fun (and successful!) shopping trip.

I will be catching up with you this weekend!