Time keeps marching on relentlessly and, looking through the photos on my camera, I've just realized I forgot to tell you about the flea market we went to two weeks ago!

The weather was its usual fickle self that day, with sunny spells regularly interrupted by heavy showers. It was quite stormy, with sudden gusts of wind, the kind that chilled the air sufficiently to warrant the wearing of one of the unworn pieces of my Winter wardrobe. 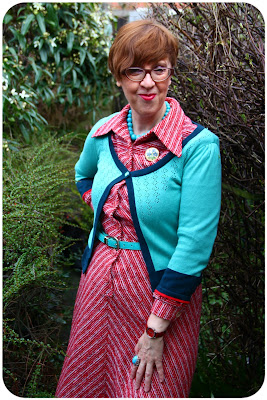 This red textured polyester dress, with its subtle but effective greyish white stripe, was charity shopped back in October. There were a couple of snagged threads in its loopy fabric, which I was able to snip off carefully, but more snags appeared as the day went on. Yes, it's that kind of pesky material!

I added a cropped turquoise cardigan, which closes with one button at the neck. It's trimmed with navy and there's additional red trim at the cuffs. 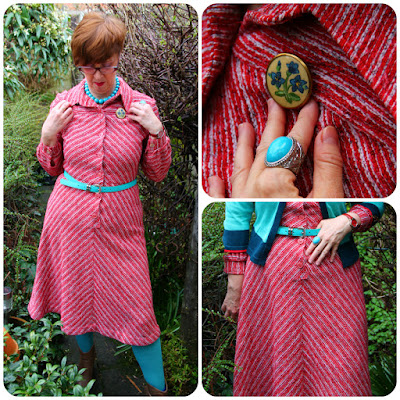 I used more turquoise for my opaques, belt, necklace and ring, which contrasted nicely with the red of the dress. The vintage brooch, with its posy of embroidered gentians, was found in an antiques shop in Carmarthen back in 2017. It was part of a rather huge haul.

I love the chevron pattern in the bodice as well as the skirt. The only disadvantage is that the dress is unlined, and thus requires a slip worn underneath. 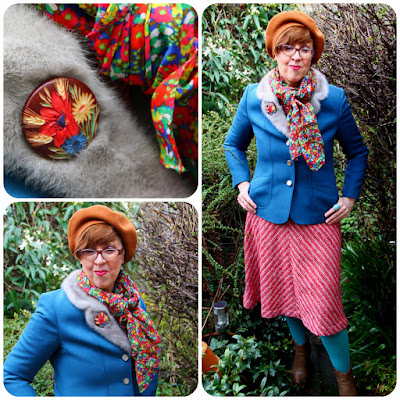 As I know it can be rather chilly inside the flea market venue, I opted for my teal jacket with its grey fur collar, to which I pinned a vintage brooch carved with summer flowers. The floral scarf echoed the colours of the brooch almost exactly. The caramel Burberry beret, a lucky charity shop find from several Winters ago, is my current favourite, and rubs along quite well with my tan ankle boots. 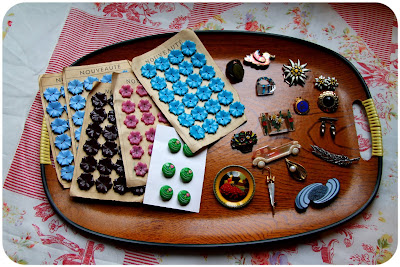 Without further ado, these are the treasures we found at the flea market. They all fit neatly onto the wood effect tray, which by the way wasn't a new buy but has been in our possession for many years.
I often use it for making group photographs of my smaller finds.

I picked up several full cards of vintage flower-shaped buttons, at € 1 each. The green celluloid buttons decorated with dainty flowers were obviously a bit more expensive, but aren't they absolutely delightful? 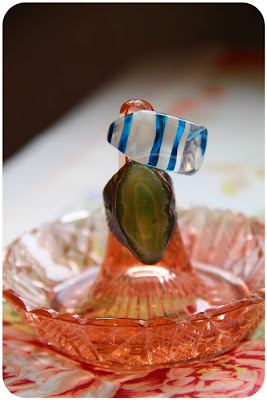 At one of my favourite stalls, which is always heaped with affordable costume jewellery, I bought these two rings as well as several brooches, although I have to admit that I can't remember exactly which ones. As usual, there were several stalls selling jewellery and as luck would have it I found treasure at quite a few of them. 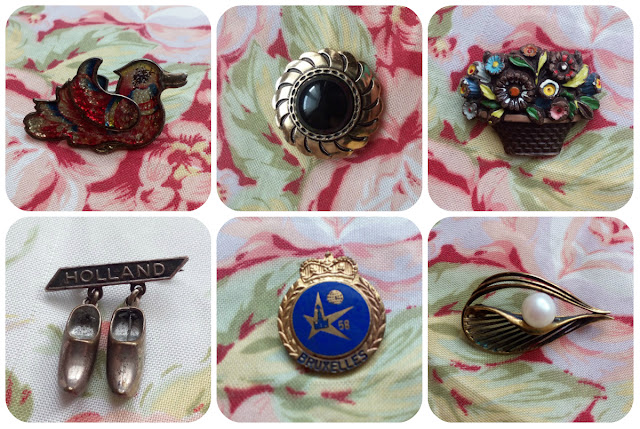 Favourites here are the flower basket and the souvenir brooch from Holland with its two tiny clogs.

In the middle of the bottom row is an Expo 58 brooch for Jos's collection. 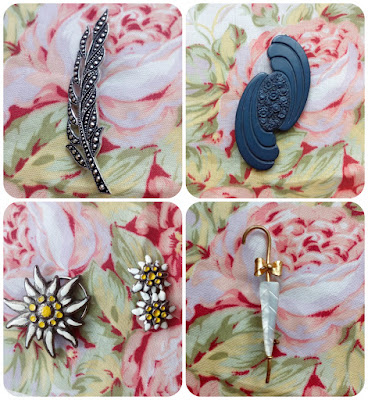 The carved plastic brooch on the top right is the twin of a pink one I already have in my collection, while the Edelweiss on the bottom left are a scarf clip and a brooch with two small flowers respectively. And how cute is the little mother-of-pearl umbrella? 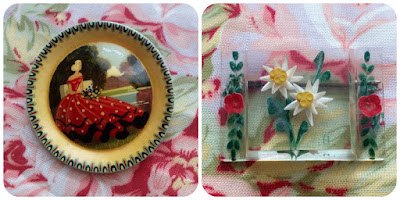 Different materials but both equally charming: a round painted wooden brooch, featuring a lady sat on a bench gazing out over a lake, and a rectangular Lucite one encasing more Edelweiss. 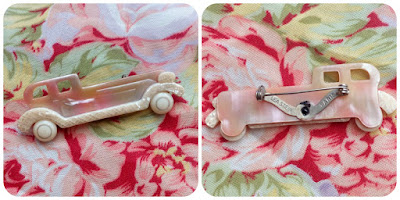 There's a seller specializing in quality vintage jewellery and I'm often drooling over the brooches displayed on her stall. She usually has one or two Lea Stein brooches which are eye-wateringly expensive.

I spotted this one at another stall and snapped it up at a very reasonable price. Me happy! In the week that followed, there was a definite improvement in the weather and, quite uncharacteristically, on the first day of Spring it actually felt like Spring!

Sadly, I had to work that day and, what's more, I couldn't even enjoy the view. They're cleaning the building's facade and, after putting up scaffolding, which already marred my view, they have now blocked it completely by putting up a huge advertising canvas. That's my office building on the left, before they put up the canvas. I'm on the 5th floor. And on the bottom right is my current view! 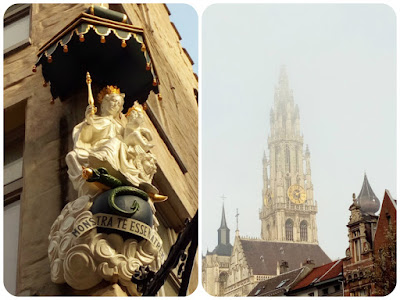 I actually had to step outside to snap the cathedral's tower with the sun breaking through the layer of mist which had been hiding it all morning. On the left, another one of Antwerp's delightful street corner Madonnas, which has been recently cleaned up and restored to its former glory. 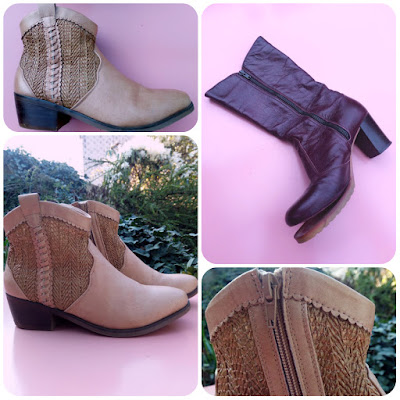 That same week I had a little misadventure with one of my boots. I was wearing the burgundy pair I picked up at Think Twice last Autumn. While I was at work, I almost tripped up when I got up from my chair, as apparently the sole of one of the boots had become unstuck.

There was no way I could walk in it and, apart from using a rubber band to secure the sole to the boot, I had no other way to temporarily repair it. So, wearing an emergency pair of ballerina slippers I keep at the office, I made my way to the nearest, reasonably priced, shoe shop, where I picked up this pair of pinkish tan ankle boots, with decorative wicker-like panels.

The boot, meanwhile, has been to the cobbler's, so that this favourite pair can be worn again. 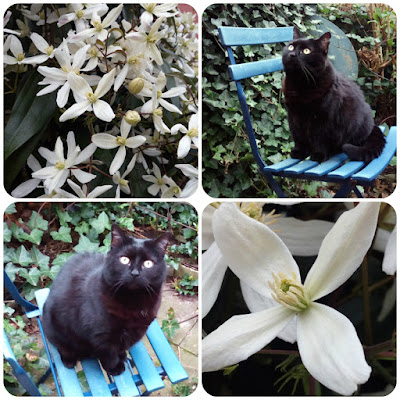 Spring has also arrived in earnest in Dove Cottage's garden by now, and our Clematis armandii is strutting her stuff quite spectacularly, displaying literally hundreds of scented white flowers.

Phoebe clearly is a bit dazed by it all!

Linking my red and turquoise outfit to Patti's Visible Monday once the link is up!