Although I keep claiming that my blog is my on-line diary, it sometimes feels as if I'm writing a piece of history, as my posts are constantly lagging behind real life.

So, dear diary, this is what I did on Saturday 9th of March!

It was the day of that yearly charity shop event called Retrodag (dag is day in Flemish!), the day all Belgian charity shops are selling the vintage stuff they've saved up in the past year, often at ridiculous prices, creating what someone on Facebook aptly called artificial scarcity with stuff they've been given for free!

We used to make a day of it, starting out early and taking a picnic, driving from one shop to another. Disenchanted with the same old-same old overpriced stuff on offer, we have lost some our initial enthusiasm for the event, and only visit some of our favourite shops. 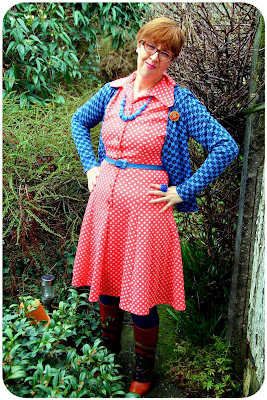 We were both feeling a bit tired as well, which rather put a damper on it all, but as I didn't want to give in and have my day spoiled, I decided to go for full-on colour therapy.

What about coral? I've had this dress in my wardrobe for absolutely ages, but I don't seem to wear it much anymore, as I've sort of gone off polka dots lately.  Still, it is getting at least one outing a year, and I thought this was the perfect day for it.

I'm struggling what colour to wear with it and always seem to end up pairing it with shades of blue. This colour has clearly got me stumped! 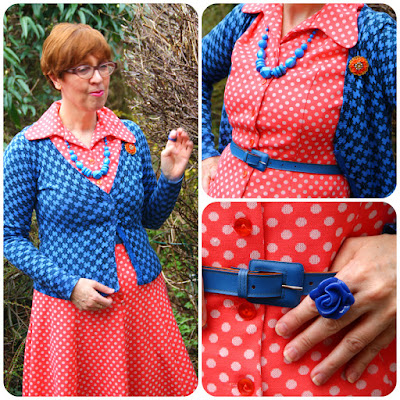 So, blue it is then. I picked cobalt blue opaques, then dug around in my suitcase full of belts, where I found this matching leather one. My beaded necklace and plastic flower ring, both in a similar shade of blue, were flea market finds. 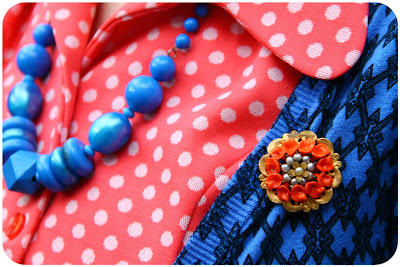 The charity shopped cardigan with its two-tone chequered print provided a welcome contrast to the dress's polka dots. Still staying within the colour scheme, I added an orange vintage brooch bought from the Brooch Lady in November 2016. One of the advantages of blogging is that I can now track down what I bought where, and when! 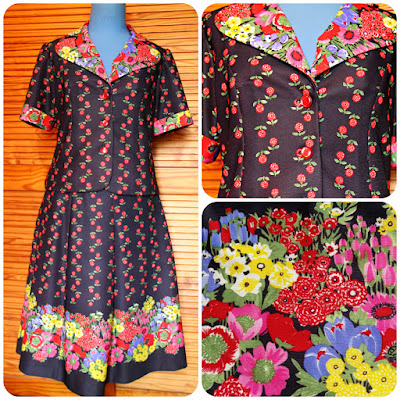 The first shop we were headed to always has a huge rail of vintage clothing. I picked up armfuls of stuff to try on, eventually settling on a skirt suit, a dress and two skirts.

The handmade skirt suit has a wide flouncy skirt and a short, fitted, wide-lapelled jacket. The main part of both the skirt and the jacket is black sprinkled with tiny red flowers, while an explosion of blowsy Summer flowers adorns the skirt's hem and the jacket's lapels and cuffs. 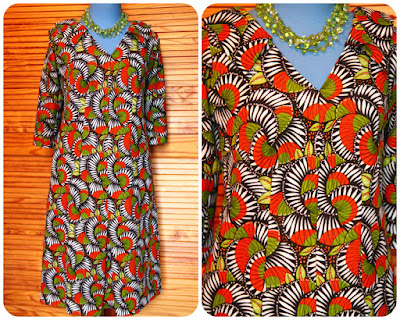 The dress, with its tropical white, chartreuse, orange and yellow print, is handmade as well. It has three-quarter length sleeves, a V-neck with a neat little collar, which in the pictures is a bit lost in the print, and a single pleat at the front. 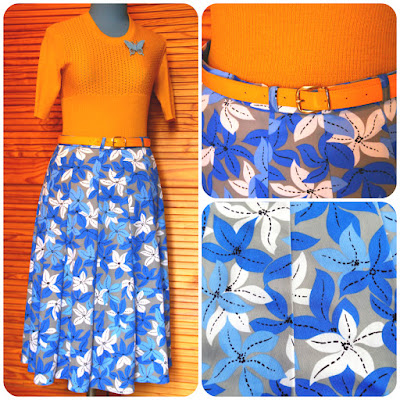 The first of the skirts is a midi length one and has a blue and white flower print on a dove grey background. Angelica is wearing it with a short sleeved yellow knit jumper, to which I pinned a blue butterfly brooch, and a yellow belt. 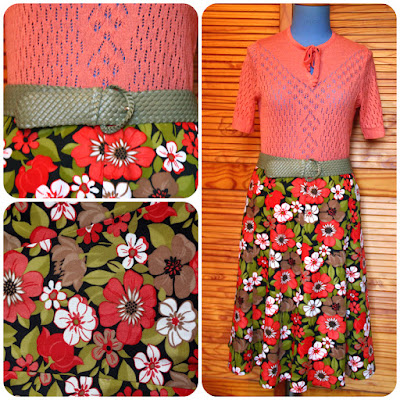 The second skirt is knee-length and its print has a profusion of moss green, orange-red, white and brownish flowers. Angelica is wearing a coral openwork knit jumper and a sage green belt with it.

While queuing at the till, I spotted this set of jewellery, consisting of a brooch and clip-on earrings. 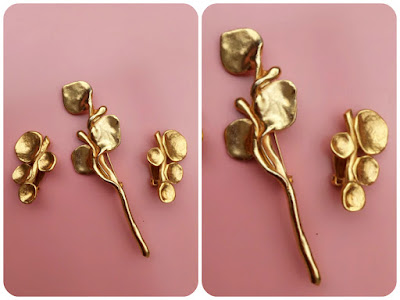 They are stamped on the back with the words "Il Etait Une Fois" (the French equivalent of "once upon a time"), which after some googling I discovered is a contemporary French jewellery company, established in 1987, which produces pewter jewellery plated with silver or gold.  I paid € 5 for the set, which turns out to be more than a good deal, as I found a similar brooch on its own, priced at € 35, on their website. 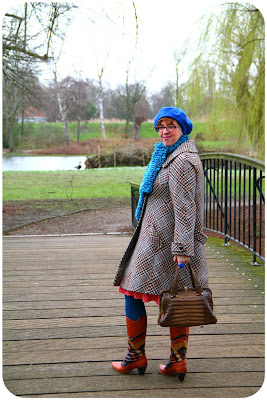 Then we drove down to our second shop, where we had a car picnic, after which we decided to clear our fuzzy heads and make a quick circuit of the park.

The groovy boots I'm wearing were actually picked up on a previous Retrodag event back in 2017.

I bought the vintage plaid swing coat at our most local charity shop a couple of years ago and it has been a firm favourite ever since. I love its shorter length and the half belt.

The frilly blue scarf was another charity shop find, and if I remember correctly the beret was from Think Twice. 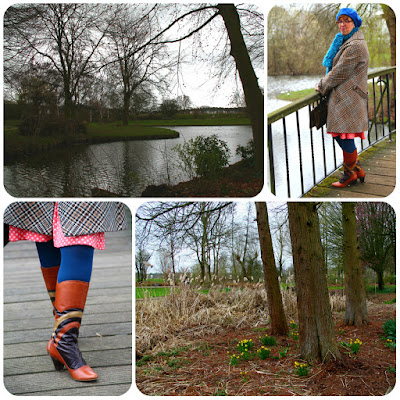 The weather was another disappointment, which was a first for this event. Looking back at the previous years, which my blog enables me to do, we had gorgeous spring weather for three years in a row.

It was chilly and a fierce wind was blowing - a prelude to the storm we'd be having on Sunday - and the park was looking a bit forlorn, as if it had suddenly been shifted a couple of weeks back in time. 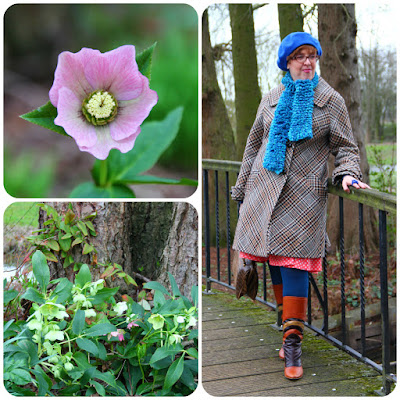 On closer inspection, February's springlike temperatures combined with the recent lashings of rain, had triggered a growing spurt in the park's vegetation.

I was happy to discover a good-sized clump of Oriental hybrid hellebores with delicate pink veined flowers. 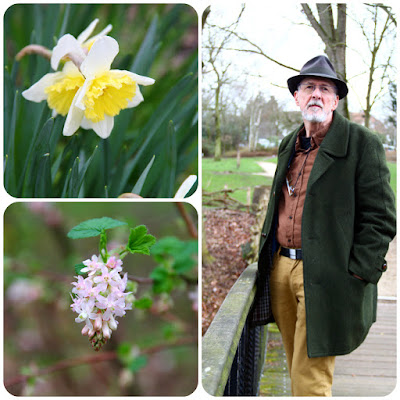 There were daffodils in bloom as well: apart from the usual little yellow daffs which were dotted around the park, there was a host of cheerful white, yellow trumpeted, ones.

Pink blossom decorated some of the shrubs which were bare only a fortnight ago, while ground-hugging Vinca minor was sprouting new shoots and opening the first of its violet-blue flowers. 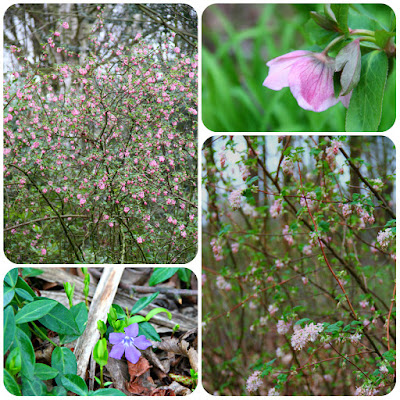 Rain was imminent, so we briefly nipped into the charity shop, but we shouldn't have bothered, really.

Halfheartedly browsing the bookshelves, my eyes suddenly zoomed in on a pictorial travel book with a familiar name on its cover:Victoria. Picking it up for closer inspection confirmed that its subject was indeed Victoria, British Columbia in Canada. 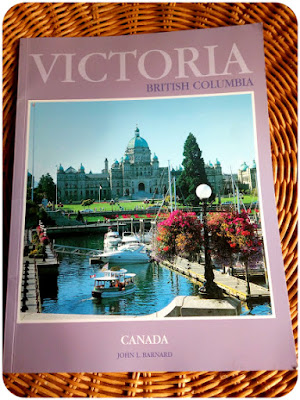 Why all the fuss, you might wonder? Well, I actually know someone who lives there. It's my fabulous blogging friend Sheila, who blogs over at Ephemera! It goes without saying that I bought the book, especially as it's got a chapter on Sheila's castle!

Linking to Patti's Visible Monday over at Not Dead Yet Style, as usual!

Posted by Polyester Princess at 19:36