My wardrobe is a rainbow of colour! No need to tell you that really. There isn't a colour under the sun which isn't represented in one way or another, although some colours are more plentiful than others. Take yellow, for instance. Although I have a couple of predominantly yellow frocks and am the proud owner of a mostly yellow 1960s suit, more often than not yellow is just part of a print, often clinching the deal when I'm in doubt whether or not to buy a garment. 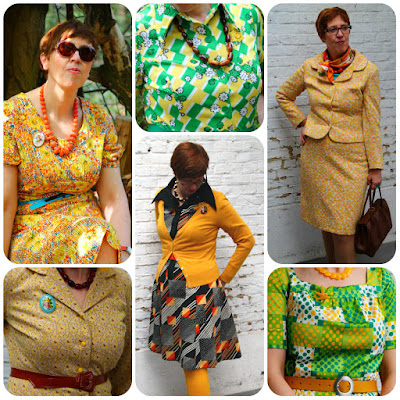 And I'm sure that you've seen my yellow cardigans and opaques enough times for them to incite a little yawn here and there. 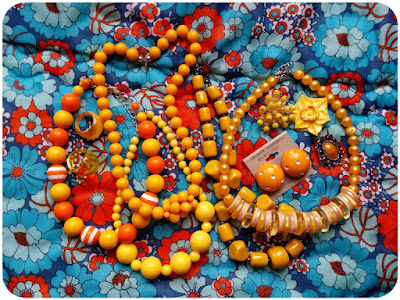 ... and even a pair of much cherished yellow vintage 1970s shoes! 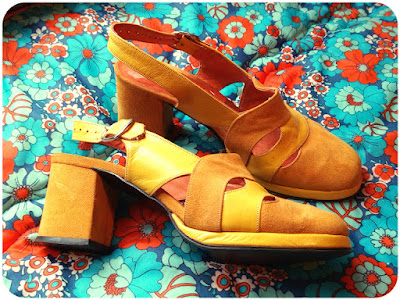 The only thing that was missing was a yellow handbag. Envious of the little handbag belonging to my Twiggy doll, I'd been looking for something similar for many a year. 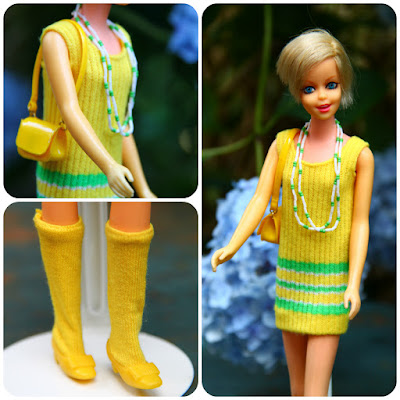 Here I was strolling back to work after a visit to my hairdresser's in the week before last when, passing one of the not-so-very-exciting second hand shops lining this particular street, I detected a flash of yellow out of the corner of my eye. Lo and behold, it was a yellow handbag, and exactly the model I was looking for. Its strap can be adjusted in length, so that it can be worn either as a handbag or a shoulder bag, like Twiggy's! 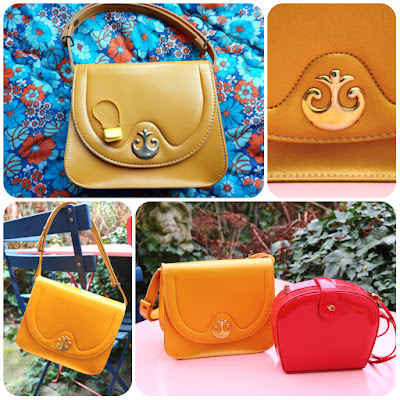 Sitting next to it was a shiny red vinyl bag, which the yellow bag seemed to be friends with. Not wanting to leave it orphaned, I bought them both.

I am now swiftly moving on to the Sunday before last.

It was another sun-drenched day and there was no way the cold I'd developed was going to keep me inside. There's nothing like a breath or two of fresh air to clear those blocked sinuses! 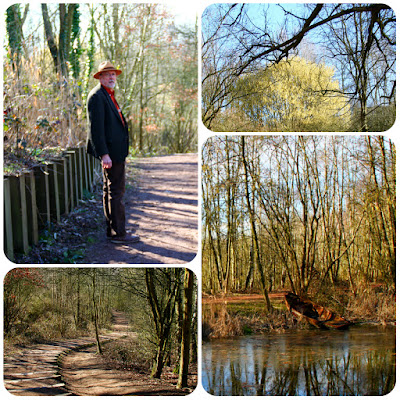 We did, however, ditch our original plans to go further afield, and drove down to De Schorre, which is only a 15 minute or so drive away.

Well known the world over because of  the legendary EDM festival Tomorrowland, people tend to forget that it is also a nature reserve, which was established on the site of a former clay pit. 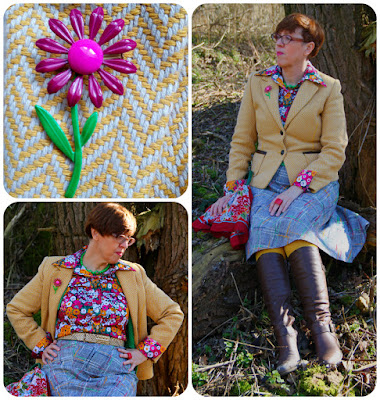 As promised, I was wearing both the vintage blouse and the blazer I'd scored on Saturday, both contributing to the amount of yellow in my wardrobe.

Ah, that blouse! It's easy to fall in love with its busy floral print in pink, green, white and yellow, reminiscent of a Summer garden.

My yellow blazer was adorned with a pink and green flower brooch, a perfect match for the blouse's print. 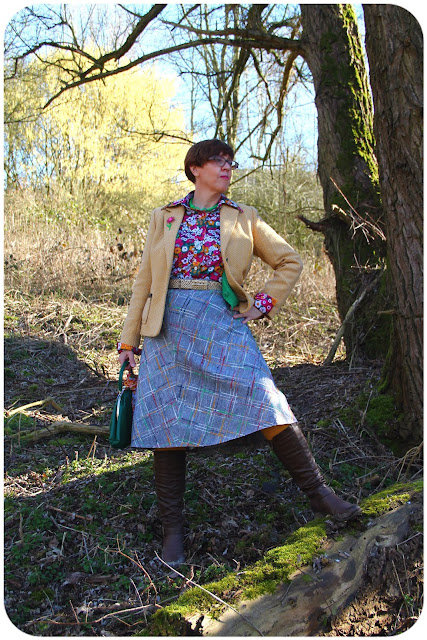 I wore my new-to-me acquisitions with one of my wardrobe staples, an A-line skirt in light grey tweed criss-crossed with red, green, white and yellow stripes. My vintage snakeskin belt came out to play as well.

You can just catch a glimpse of my green cardigan - peeking out from under the blazer - and my jewellery consisting of green beads and a red plastic ring. More green was added by carrying my green handbag, the floral scarf I was initially wearing tied to its handles.

Yellow opaques were the obvious choice, and  my feet were happy I was wearing my old brown boots.  They are slowly but surely falling apart, but they are so comfy and just perfect for walking. Whatever shall I do when they eventually give up the ghost? 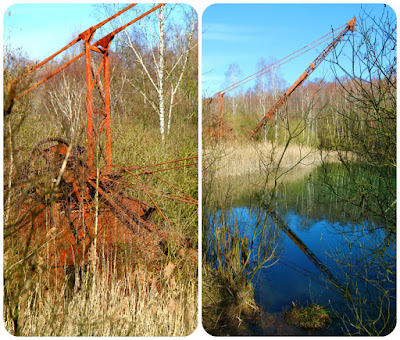 We hadn't been to De Schorre for a while, and took a different route than usual, taking a path sloping down to the deepest part of the reserve, where an old clay dredger majestically reigns over a deep  green pool, a water-filled former clay pit.

The water was reflecting the blue of the sky and the rusty red of the derelict dredger, its body almost swallowed up by the rampant reeds edging the pool. 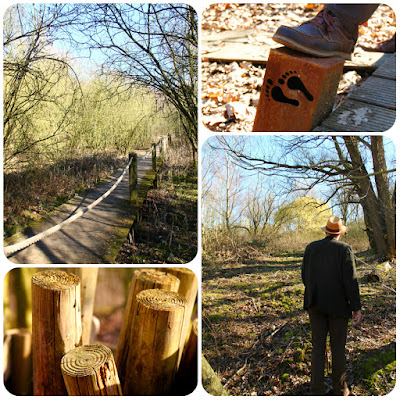 From there, we followed a boardwalk path meandering through the domain.

Once or twice, we veered off this path and explored some of the barefoot paths which have been laid out. Not on our bare feet, obviously! 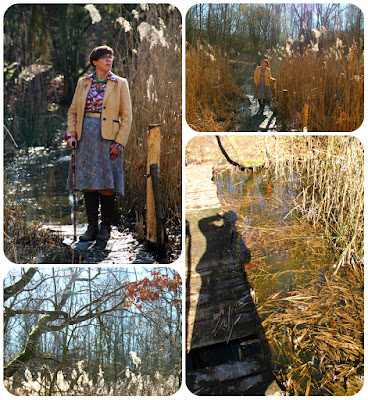 I particularly loved this path, consisting of higgledy-piggledy half-rotten planks of wood floating mere centimeters above the marshy ground. Dwarfed by giant grasses, I walked until the path ended, drowned completely by the swollen waters. 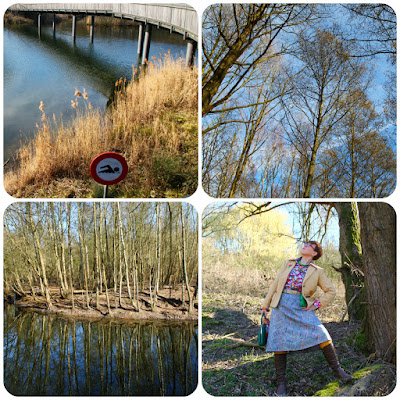 Apparently, new barefoot paths are being introduced shortly, but these were strictly forbidden until the 1st of April, when they are officially opened to the public. 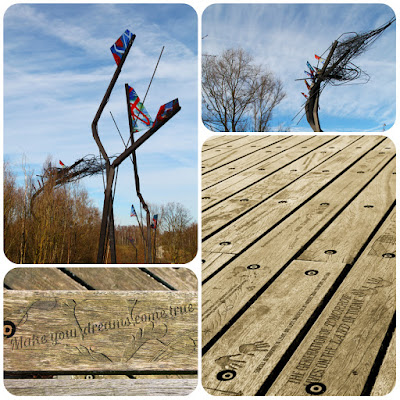 After skirting the main part of the domain, we walked over the 537-metre-long One World bridge, which is actually an art installation created especially for the Tomorrowland festival.

Symbolizing the connection between people and bridging their differences, the bridge has a total of 210.000 inscriptions, based on messages left by the festival visitors, etched on its wooden floorboards, railings, and even on the benches placed at regular intervals. 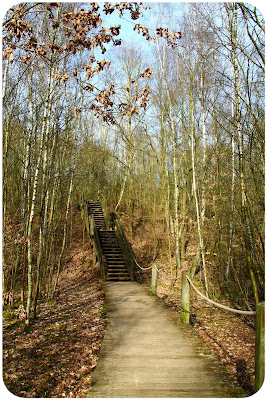 What goes down must come up!

Having taken the gentle descent down into the former clay pit, we now had to climb these steps all the way up again.

Needless to say, my bad knee didn't thank me for this, but I did make it to the top in one piece.