While we are currently enjoying temperatures of 25° Celsius and more, last weekend they were in the single figures, with a frosty start to the day. Well, I guess that's April for you, showing us who's boss and hitting home the fact that we're not out of the woods just yet!

Bad timing, as on that Friday I'd taken the afternoon off to continue the wardrobe change-over I'd started the week before. Putting away the bulk of my Winter dresses - leaving out a small segment of lighter long-sleeved ones for chilly days - and replacing them with a rail full of short-sleeved frocks, took up most of the afternoon. I'll be changing over skirts, coats and shoes later, but at least this means the main part of the job is done! 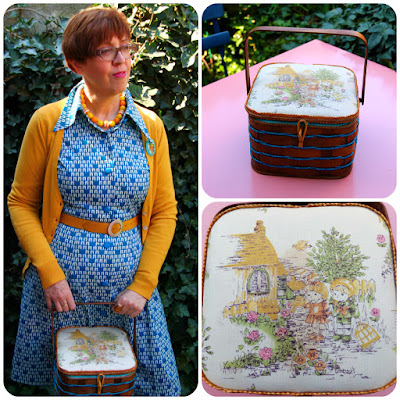 One of the remaining long-sleeved frocks came out to play on Saturday. Outside, an icy wind was blowing, but Dove Cottage's walled garden has a micro climate of its own where, protected from the worst of the wind, it is always about two degrees warmer.

The sky blue dress with its intriguing print, was bought at Episode, part of a Dutch chain of vintage shops, on the day they re-opened in Antwerp after several years of absence, back in 2015. 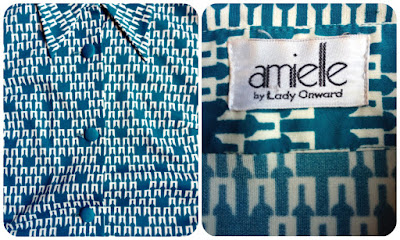 Inspired by Ivana, I dug this sewing box out of my wardrobe. Bought at a flea market last Spring,  with the intention of using it as a handbag, I'd all but forgotten about it! Isn't it sweet?

In the end, I thought it was too bulky for our afternoon plans, but at least it got its outing, even if it was only into the garden! 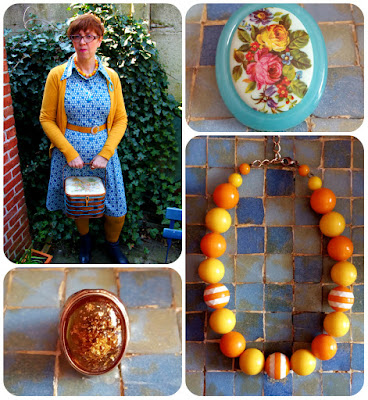 I automatically think yellow whenever I'm wearing this dress, and I don't think I've ever worn it with any other colour. So, my round buckled yellow belt and yellow cardigan and opaques were the obvious choices.

The yellow, white and orange beads, which always remind me of the chewing gum I used to get from the vending machine outside the corner shop back in the early 1970s, came from the sadly missed Blender Vintage Shop. Other accessories were the sparkly yellow ring, a retail buy, and my blue-rimmed plastic flower brooch, which was a charity shop find. 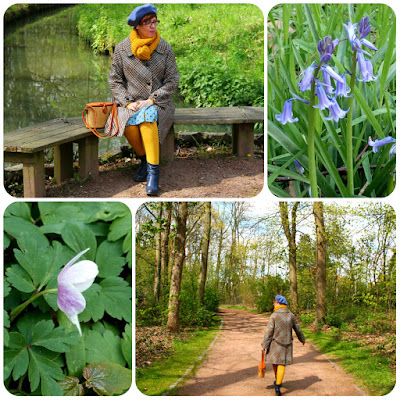 On our way to the charity shops, we stopped for a short stroll and some photos at the large park in Boom, which we hadn't visited since last Summer. I particularly love this part of the park, with its little wooden bridge, reminiscent of the Monet painting, crossing one of the rills.

Wood anemones, some showing their purple streaked undersides, were joined by the first of the bluebells and, in front of the bridge, a small patch of forget-me-nots. 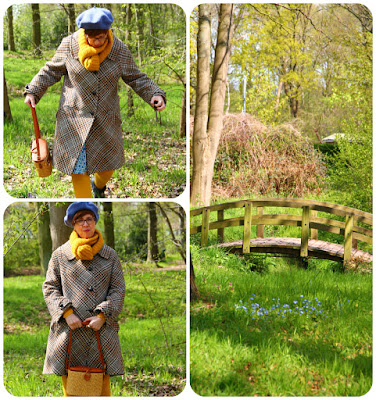 I wore my vintage plaid swing coat with its droopy half belt and it was chilly enough for a beret and woollen scarf, in complementing blue and yellow.

I succumbed to the basket bag I'm carrying in a pop up shop in Antwerp last week. I was looking for a zipped-top cross body bag to take on our trip next week, which I found, but I was very naughty as this one came home with me as well.

If the weather gods were determined to play their devilish tricks on us, the charity shop goddesses more than made up for their foul behaviour! It must have been our reward for all the stuff we've donated lately!

There was a shoe sale going on, with all shoes regardless of whether they were quality or cheapo brands, priced at € 4. 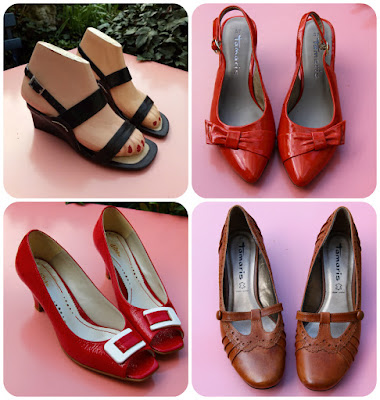 The black sandals are Clarks, while the caramel Mary Janes and the orange sling backs are Tamaris. I have those in pale turquoise as well. The red and white retro style pumps are from Diba, a brand I haven't come across before. All four pairs are as good as new! 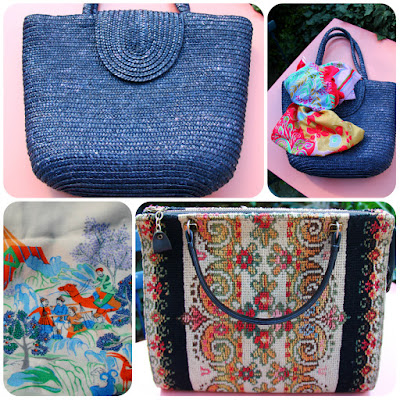 I find it hard to resist straw or wicker bags, so I fell for this navy one, which closes with a tab at the top. The carpet handbag was a snip at € 2, while a rummage in a box full of scarves - always worth a look! - yielded these two beauties. The silk scarf with its delightful print on the bottom left is vintage St. Michael. 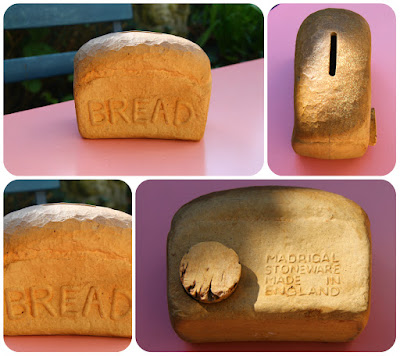 I can see raised eyebrows here! If you are wondering whether I've gone mad and photographed the result of a visit to the local bakery, then I urge you to look twice!

This loaf shaped money box was on the miscellaneous shelf of our most local charity shop for € 0,50. We had no intention of buying it until we spied the back which proudly proclaimed it was  Made in England. Oh go on, it's only € 0,50, we thought! 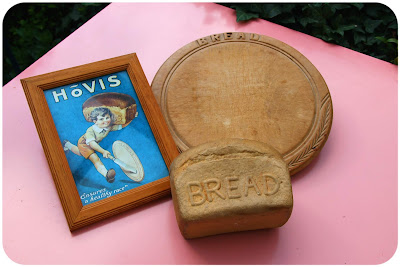 While I was trawling the clothing aisles, Jos plonked himself down in a conveniently placed easy chair and googled the thing on his phone. Turns out it's from around 1940 and that is was made for Hovis. That, in its turn, reminded us of the framed Hovis ad on our kitchen wall. Incidentally, we also have a vintage bread board, very similar to the one the boy in the ad is playing with, which we picked up in an antiques shop in Rye many years ago. 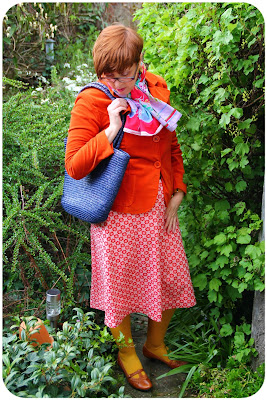 But let's go back to those clothing aisles I was browsing while Jos was doing his detective work.

Did I find something? Well, yes, and here I am wearing my finds. All you can see here, except for the tights and belt, which I was already wearing, was charity shopped that day! 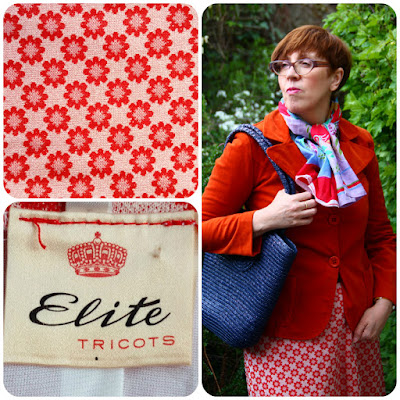 I'm sure you've already spied the shoes, basket and scarf, but let me take you through the rest of my finds.

First up is a deadstock vintage skirt, with a delightful daisy print. As is often the case, I had to plunder a shop display for it. 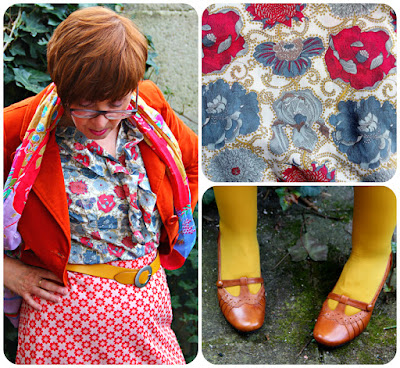 The orange velvet blazer is by Belgian label Avalanche and a trawl on the Internet revealed it must have retailed for well over € 100. I'd been dithering over this, as it was € 10, which I thought was a bit expensive, but in the end I gave in as it's such a nice fit, not to mention a gorgeous colour.

My final buy was this ruffle front skirt from Gigue, an absolute bargain at € 4 as the original retail price for this too was in excess of € 100. 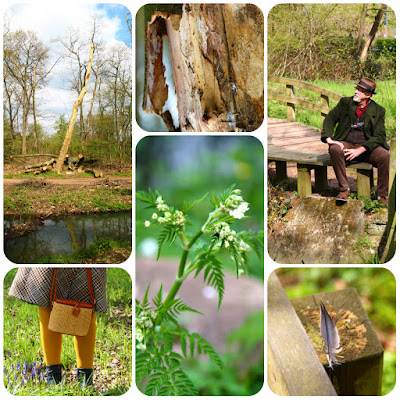 Don't you love a bit of charity shop Karma?

I am actually counting the days, as in only two days we will be going away on a little break.

The weather has made a complete U-turn by now, so hopefully it will stay on the straight and narrow until at least the end of the week! But, knowing our luck as well as the famously fickle Belgian weather, it will probably rain!