I'm continuing my travelogue with what we did on Wednesday, day five of our little holiday back in September.

Our feet still a bit sore from our long walk at the seaside, we wanted to take it a little bit easier the next day.

It was thus that we found ourselves in a place called Lo. At first sight it looks like a small provincial town, or indeed a somewhat overgrown village but, with just over 3000 inhabitants, it is actually Belgium's smallest city. 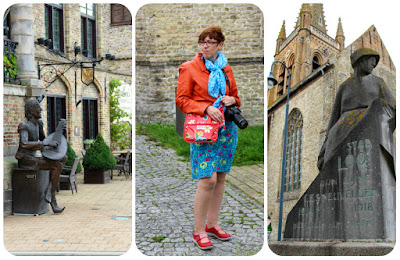 It wasn't my first visit to Lo. Indeed the first time I ever set foot there was back in the early 1980s, when my then boyfriend and I cycled to it by tandem all the way from Antwerp, a ride of almost 155 kilometers. We were visiting a friend who'd bought a dilapidated farm on the outskirts of the town and we stayed for 2 weeks, alternately sleeping in a tent, which had seen better days, and the farm's hayloft.

I hardly remember anything about Lo itself, other than it had a cheese factory where cheese could be bought cheaply directly from their shop. 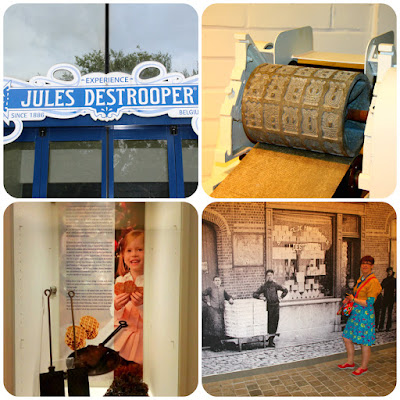 The cheese factory might have moved on but there's another factory only a stone's throw from the market place, called Jules Destrooper.  Founded in 1886, they have been producing biscuits for well over a hundred years and, in order to celebrate their 125th anniversary, a visitor centre was opened in 2011. 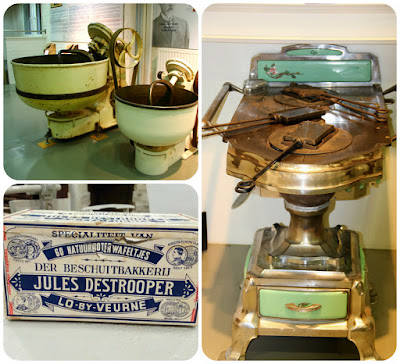 While we were getting our bearings, a delicious smell of baking was lingering in the air, so we decided to follow our noses and make our way to the visitor centre, the mouthwatering aroma getting stronger as we were nearing the factory's premises.

In different rooms, the rich history of the family business and the art of biscuit making in general is laid out. 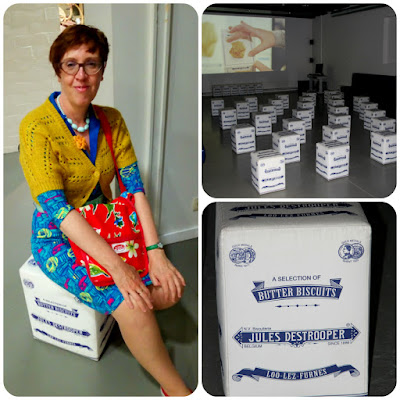 In one of the rooms, a film outlining the factory's history could be viewed, while sitting on stools made to look like boxes of Jules Destrooper biscuits.

At the end of the tour, there's an opportunity to sample the various biscuits on offer, accompanied by a cup of coffee or tea. 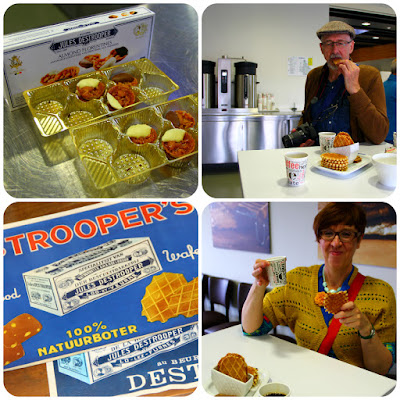 By then it was lunchtime but, having stuffed our faces with biscuits, we weren't at all hungry, so we followed a town trail, a leaflet of which can be obtained in the town's tourist office.

Same as in Nieuwpoort, there were works of art in every nook and cranny. 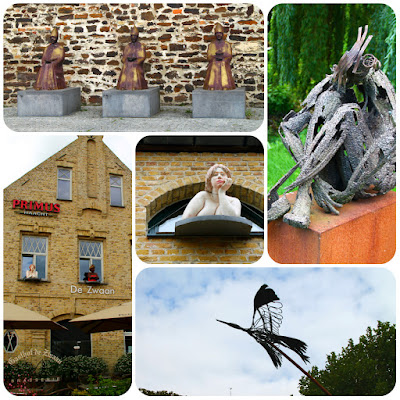 The picturesque West Gate, with its defence towers, is the only remaining gate of the town's original four.  Next to the gate is the Caesar tree where, according to legend, Julius Caesar tethered his horse and rested in its shade on his journey to Great Britain. 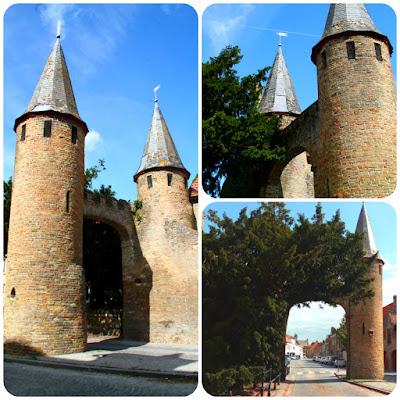 At the end of a cobbled lane lined by yet more works of art, an intriguing tower was beckoning. The tower is actually a tall dovecote, dating from 1710, with 1132 pigeon holes, which used to belong to an abbey. Some pigeons were still nesting there, although allegedly there were Pokémon hiding in there as well. A couple of Pokémon hunters were milling around the tower and rudely spoiling my view, which I proceeded to tell them in no uncertain terms. 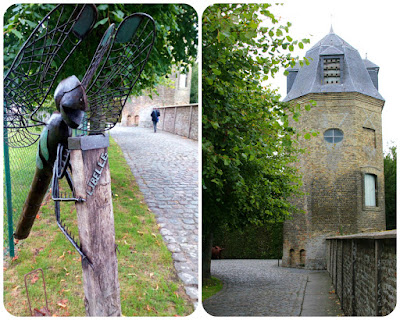 The main square is dominated by the old town hall, complete with belfry tower, dating from the late 16th century, the ground floor of which is now used as a restaurant. On the other side of the square is the abbey of the Poor Clares, established in 1492 after the nuns arrived in Lo to nurse the plague victims. The abbey was enlarged in the 16th and 17th century and now functions as the town hall after the nuns sold it to the town authorities in 2008. 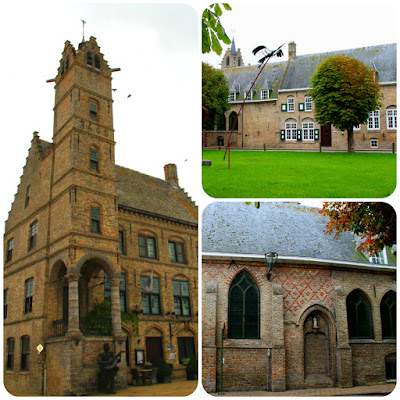 After a late-ish car picnic, we drove on to our next destination, Beauvoorde Castle, a veritable fairy tale moated castle hidden away in a landscaped park in the tiny village of Wulveringem.

After the original castle was burned down by bandits, it was rebuilt in 1617 in Renaissance style. At that time the castle was owned by Jacob de Bryarde, and it remained in the Bryarde family until 1828, when the family fortunes were in decline and the castle was falling into a state of increasing disrepair. 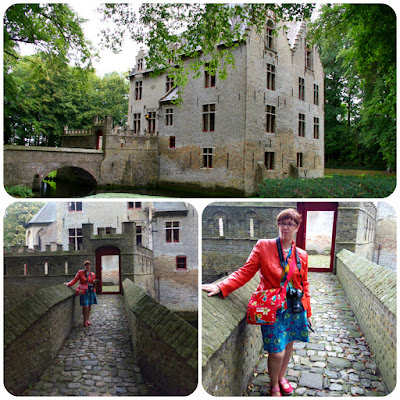 A visit starts at the visitor centre, where there is an introductory exhibition and you are supplied with an audio guide. Then you cross the bridge over the moat where, standing in the small courtyard, you have to pull the bell to gain entrance. 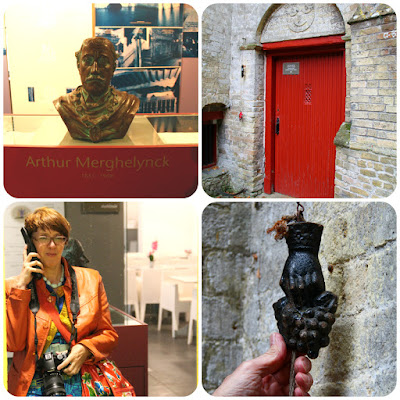 From the outside, Beauvoorde Castle appears to be a perfect example of a 17th century castle. But don’t be deceived. It was actually created in the late 19th century through the romantic vision of one man.

In 1875, wealthy aristocrat Arthur Merghelynck fell in love with the by then ruined castle. He was attracted by its picturesque setting, as well as its potential to fulfill his grand scheme. 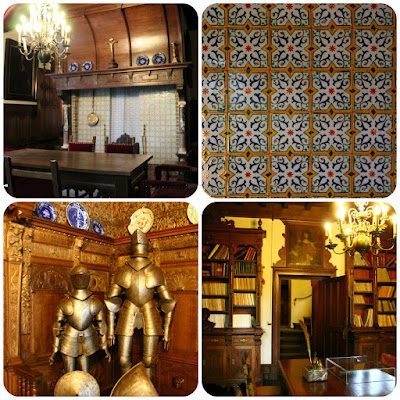 Merghelynck was an incurable romantic who resented the increasing industrialization of Flanders. He wanted to cherish the atmosphere, style and romance of the past, and in particular the 17th century. 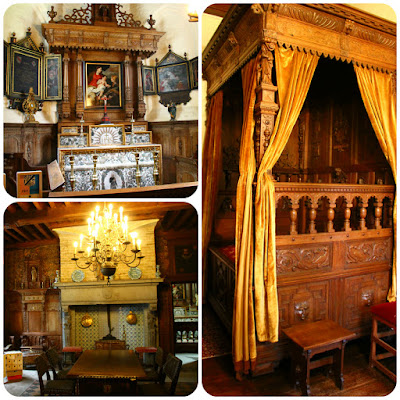 Over the next 27 years he  rebuilt and restored Beauvoorde Castle, and filled its many rooms with original Flemish furniture and art bought at auction, while anything he was unable to find, he had reproduced. The result is a 17th century castle fully furnished in the style of that period. 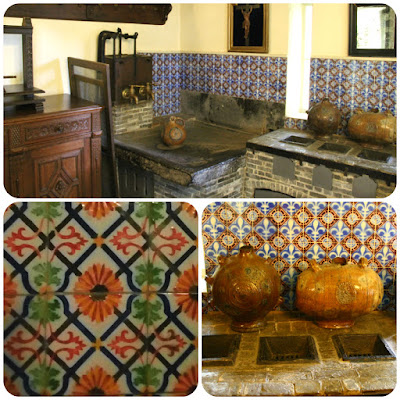 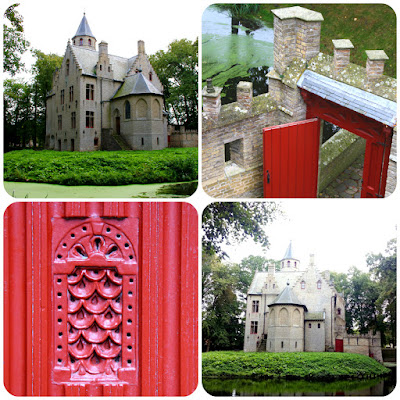 Before putting another lovely day to bed, here is a closer look at what I was wearing. 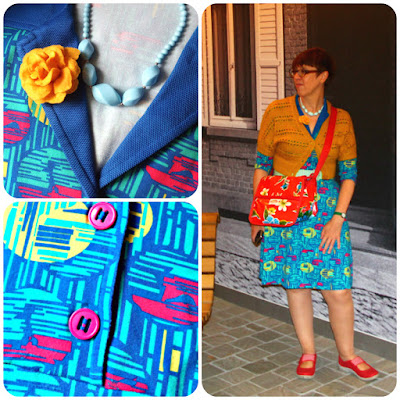 Linking to Patti's Visible Monday at Not Dead Yet Style