About things today and fallen leaves

Lately I've been so busy telling you all about our travelling adventures, that I've been neglecting to properly show you what I've been wearing.

At this time of year, the weather seems to be all or nothing, with the sun working overtime one day - as if to make up for the dreadful Summer - and Autumn at its worst the next. Sometimes it's a struggle to get dressed appropriately in the morning.

I've been trying to make the most of what is left of the season, by wearing items from my Summer wardrobe for as long as I can.

Two weeks ago (how time flies!), this was what I was wearing for a Sunday walk in the park. 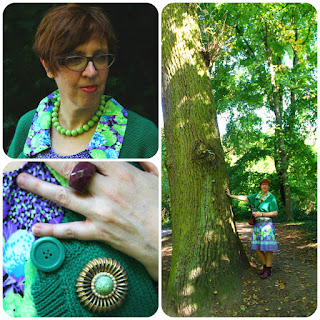 Such a gorgeous day it was, but with a hint of Autumn's earthiness in the air.

I chose a short-sleeved dress printed with flowers and fruits (I detect apples, pears, cherries and grapes) in hues of purple and green. 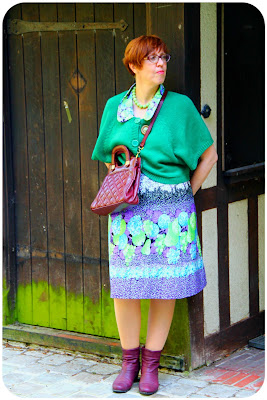 The burgundy booties I was wearing are very comfortable and perfect for a walk in the park. However, when we were walking towards the park I noticed that the top piece of one of the heels was coming loose. There was nothing for it but to continue but by the end of our walk, it had gone, so it must have joined the carpet of crunchy autumn leaves at some point. 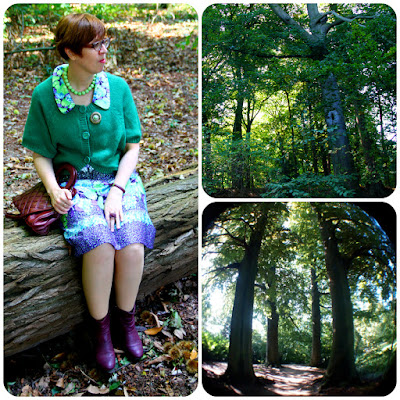 Or maybe I lost it near this weathered tree trunk, among the prickly husks of chestnuts, some of them still harbouring their glossy reddish cargoes. 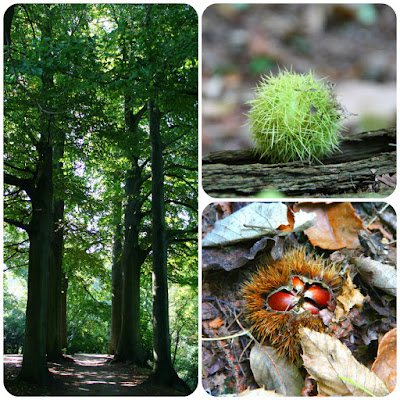 There was no need for a coat, but I did wear a chunky knit green batwing cardigan, which I'd charity shopped the day before (one of three I bought that day). 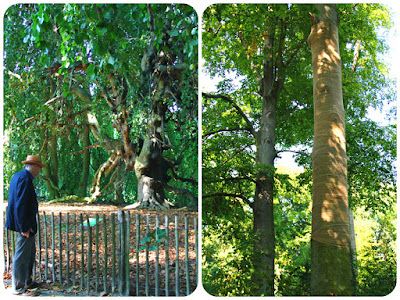 This  majestic 180 year old weeping beech (left) is fenced in to protect its shallow root system and delicate bark.

Elsewhere, several trees were strangely bandaged up, looking like casualties in a hospital. I'm sure there's a reason for this, but I've been too lazy to find out! 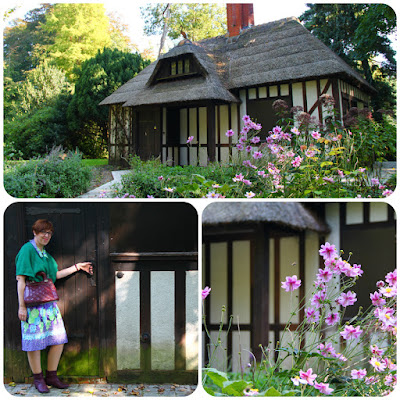 The late September sun was bathing everything in a hazy golden glow, making the park's folly, called the English cottage, look particularly charming and lighting up the Japanese anemones growing in its diminutive cottage garden. 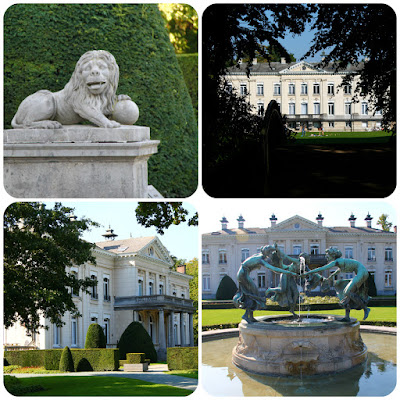 Emerging from the trees, the castle appeared like a mirage on the horizon. The dancing nymphs were dancing their eternal dance around the trickling fountain, with the sun on their backs and their skirts fluttering in an invisible wind. 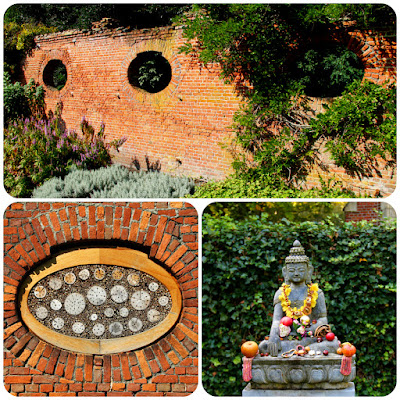 On our way out, we nipped into the walled public picking garden where, when in season, a variety of fruits - apples, pears, cherries and plums, as well as soft fruits like gooseberries and raspberries - can be picked at will.

The Gautam Buddha was presented by the Ambassador of Nepal in 2004, as a token of friendship between Nepal and Belgium. 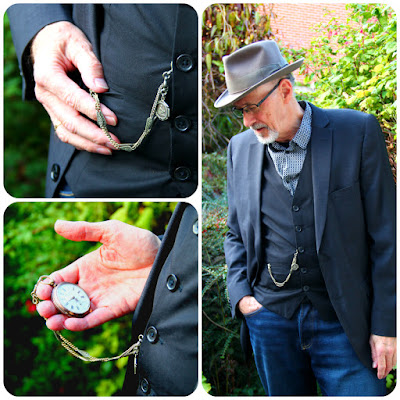 Fast forward one week. On Saturday before last, we were getting ready for a surprise birthday party thrown by Jos's children.

He really had no idea, thinking we were going to have dinner at his son's. I still don't know what made him pull out all the stops and dress up like that. The pocket watch used to belong to his grandfather.

Ok, that's it, he's now been taking over my blog for long enough!

Let me show you what I wore! 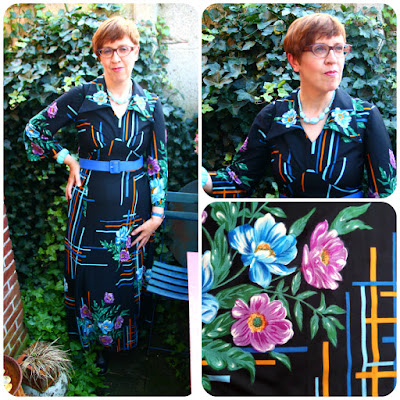 I opted for a maxi dress with three quarter fluted sleeves and a fabulous print of blue and pink flowers and orange and blue stripes. It's got not one but two labels: one says M. Fischer, Paris and the other Femina, Limoges. Sounds posh, but what is that all about? Googling didn't get me anywhere.

We had quite a full-on weekend, as on Sunday we had a flea market to go to. 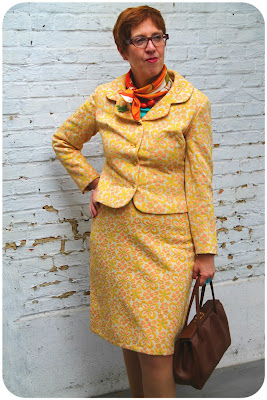 Dithering in front of my wardrobe and  dismissing several options, I finally chose this Lucie Linden two piece with a brocade-like flower pattern in citrus colours.

Underneath, I wore a turquoise three-quarter sleeve top, and I accessorized with orange beads (charity shopped in Wales), an orange and green print silk scarf (charity shopped), turquoise plastic flower ring (flea market) and a green squirrel brooch, which was bought new from a delightful shop in Antwerp. 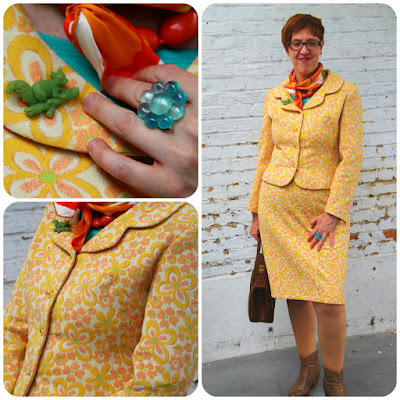 The suit turned out to be a show stopper, and I was complimented on it quite a few times that day.

At first sight, the flea market seemed to be in full swing, but it wasn't very crowded and some of the sellers complained bitterly.

Now, without further ado, let me show you what I found: 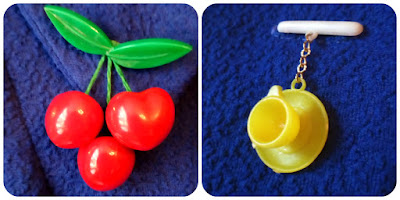 The cherry brooch is 1950s and the cheap 'n cheerful cup and saucer one was found at the bottom of a carton. The seller looked at it as if she'd never seen it before. 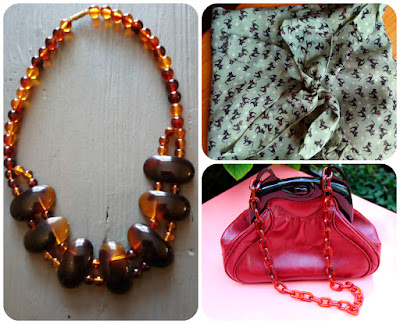 I'm quite taken with the Lucite necklace, which came from the same seller.

I'd seen the burgundy bag, with its Lucite handles, in one of the first aisles, but having quite enough handbags already, I didn't immediately buy it. Before we went home, I went back for it, though. 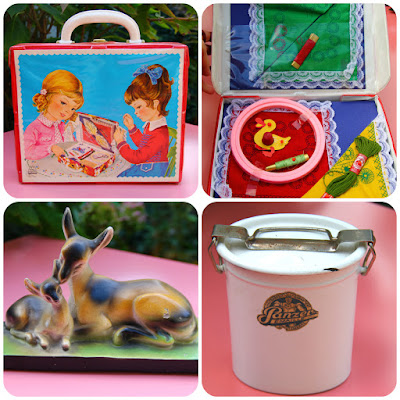 On the bottom right is a vintage enamel lunch box, made in Germany, for our kitchenalia collection.

Our last two finds came from one of our favourite sellers, Ilona.

Top left and right is a child's embroidery set, which came in a cute vinyl case. How I would have loved this as a girl, even though I was rubbish at sewing. It's hard to resist such vinyl cases, and I have several of them in my vintage Barbie doll collection.

Finally, on the bottom left, a plaster Bambi ornament. I really have to stop buying these, as we have run out of space to properly display them. The epitome of cuteness, I couldn't very well leave it behind.

Linking to Patti's Visible Monday at Not Dead Yet Style.

After this little catch up, it'll be time for the final installment of my travelogue in my next post.