There's such a lot of world to see

As last Wednesday was Jos's birthday, I'd taken the day off to commiserate with him!

The sun was shining, which would have been enough to get us out of bed, if it weren't for Phoebe, who 'd brought Jos a present: a mangled spider which she deposited at his side of the bed. Very thoughtful of her, don't you think? 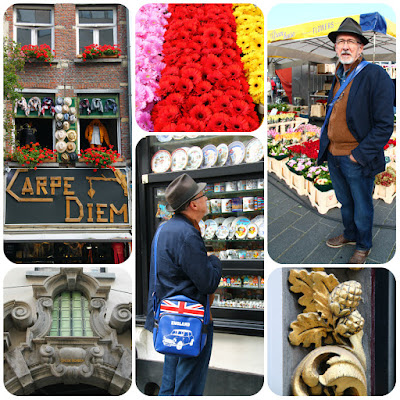 So, up we got and after a leisurely breakfast, we headed to the nearby town of Mortsel, where we parked our car and took a tram into Antwerp.

I had a hairdresser's appointment at 12 o'clock, but we were early, and ambled into the direction of the salon, playing at being tourists. 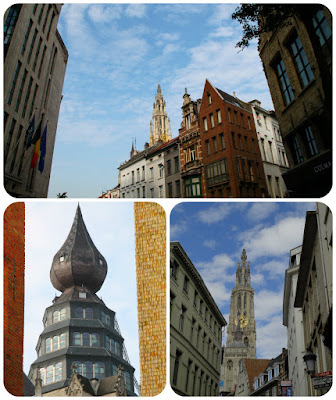 Antwerp's cathedral dominates almost every view and glimpses of it can be caught in the most unexpected of places. 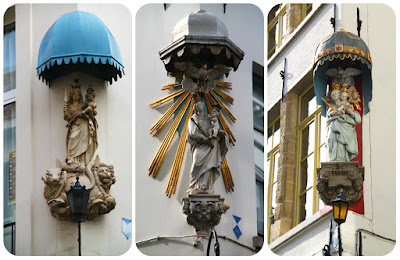 These are just three of Antwerp's elaborate street corner Madonnas, dating from the end of the 17th and beginning of the 18th century. Today, about 160 of them remain, adding greatly to the city's charm.

While Jos was enjoying a cup of coffee, my hairdresser, Michel, who has been looking after my hair for more than twenty years, was working his magic. 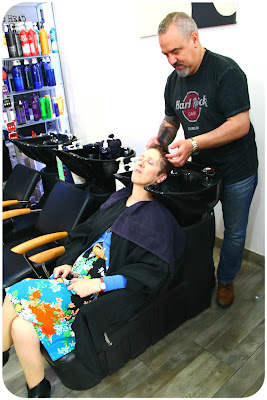 It was Michel who pointed us in the direction of a nice little place to eat, d'Aa Toert, in a narrow street running almost parallel with Antwerp's Grote Markt. "Aa Toert" is Antwerp slang for old woman, its literal translation being "old tart" but without the connotations it has in English! Indeed, the place is renowned for its delicious cakes and tarts, which we as yet have to try out. 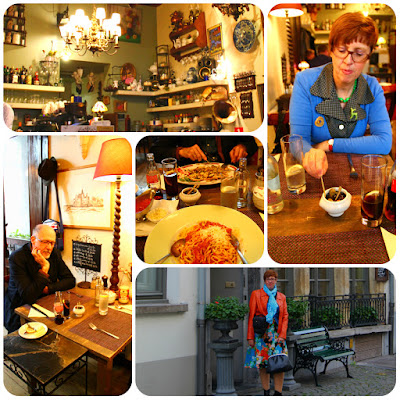 Stepping into the restaurant feels like entering a junk shop, with shelves full of mismatched china and knick-knacks, framed prints, ornate mirrors and an assortment of table lamps.

The place seemed to be full but when we mentioned Michel's name, we were promptly seated at a little table for two. After pasta (for me) and mushrooms on toast (for Jos), we received a complimentary coffee for Jos's birthday! 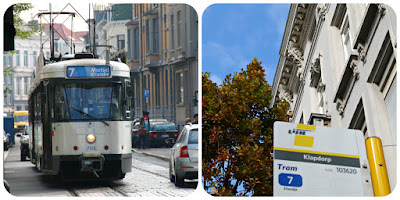 Afterwards, we sauntered towards the tram stop and waited for the tram to take us to our final destination of the day.

Our destination, as can be seen on the tram, was called Eilandje, or to give it its full name, Het Eilandje, which translates as "The Little Island".

Het Eilandje dates back to 1550 and is the oldest port site in Antwerp. During the French Regency (1795-1814), Napoleon ordered the excavation of the first two docks, which would turn Het Eilandje into a flourishing port.

In the 20th century, when the port expanded further to the north, the busy port life disappeared and people moved away from the area. For decades, it was a desolate area, a barrier between port and city. 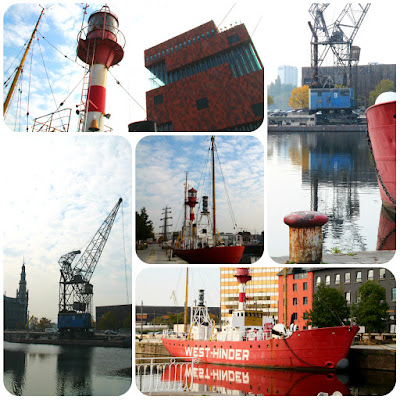 This forgotten corner of Antwerp, with its moody, rundown hangars, has been patiently waiting for a new lease of life along the river, which it has finally been given.

In the last decade there has been a real urban metamorphosis which has turned the once down-at-heel area into an attractive neighbourhood consisting of water, contemporary architecture and culture, as well as a multitude of trendy cafés and restaurants. 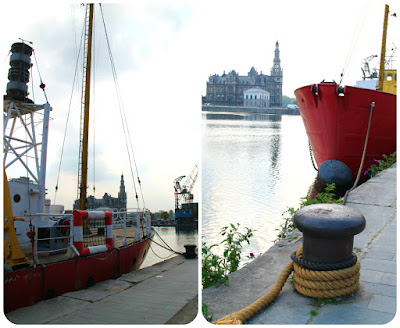 There's a hint of nostalgia as well, in the historic warehouses, rusty cranes, sturdy bollards and old bridges and locks. 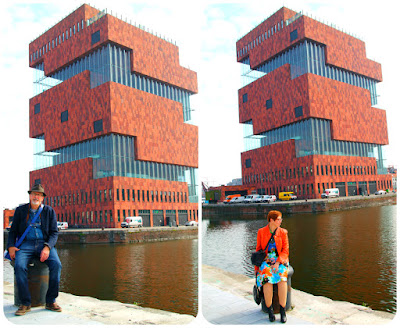 The jewel in its crown is MAS (Museum aan de Stroom, Dutch for Museum by the River), which was opened in 2011, and which was the aim of our visit. 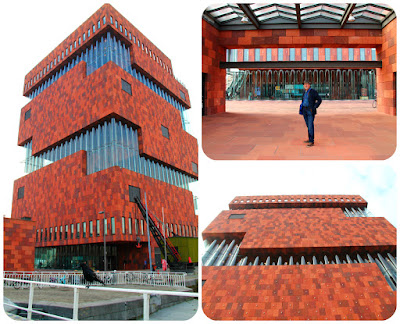 The largest museum in Antwerp and certainly the most visually striking, MAS is a sight to behold, with its staggered rusty red brick levels, looking like a tower of containers stacked one on top of the other and rising to a height of 60 meters.

It houses nearly half a million items, only 180,000 being on display, all focusing on the city of Antwerp. 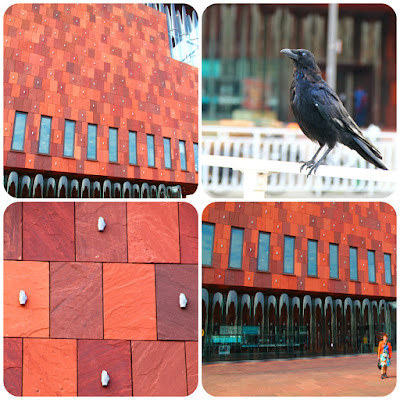 Adorning the façade are 3,185 hand shaped ornaments, a homage to the symbol of the city. 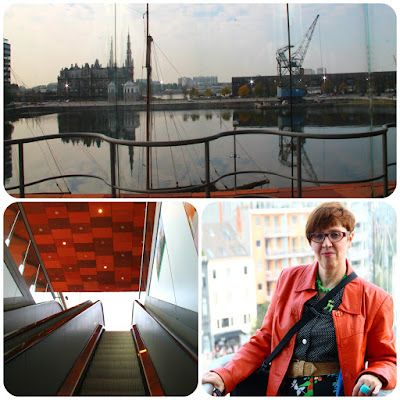 The River Scheldt has been Antwerp's lifeline for many centuries, and water is a key element of MAS, with it rippling glass and watery reflections.

The museum is well worth visiting, even if you are only there for the views!

Escalators, and one final staircase, take you past nine floors to the top, treating you to a wonderful view of the city, which changes constantly as you rise higher, each floor opening up yet more vistas pulled slightly and disconcertingly out of shape by the rippling glass walls. 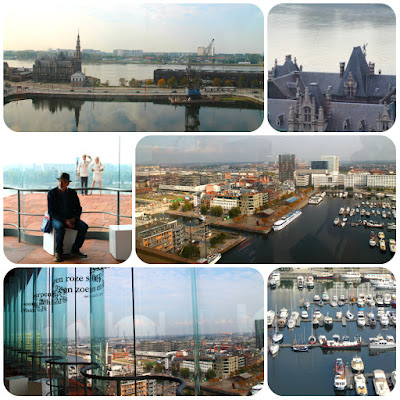 A breathtaking 360-degree panorama of Antwerp awaits you on the roof terrace: the inner city rooftops and its skyline towers, the River Scheldt snaking away beyond its bend towards the rest of the world. 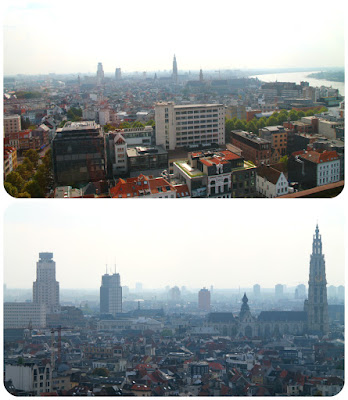 Antwerp's landmark towers, with the cathedral taking its rightful place in a prominent position, seemed to be joined by an encroaching army of high-rise buildings rising up from the city smog. We couldn't get enough of the bird's eye view of Antwerp, the city and port a Lilliput world at our feet.

There was time for some posing too, with me framed by the cathedral's towers. The orange leather jacket must be my best buy so far this year, accompanying me on many an outing. Here, I'm wearing one of my favourite skirts with it, in colourful floral Diolen, and a short sleeved black polka dot top with a notched collar. All vintage, from Think Twice. 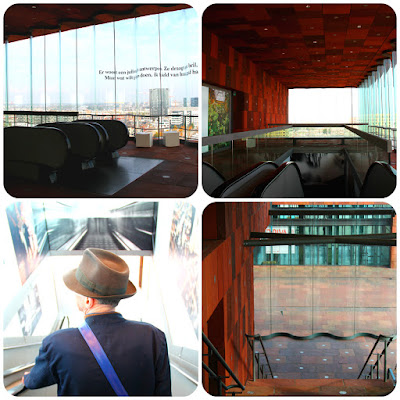 After this visual treat, we descended to the ground floor again, taking in the building's stunning architectural details. 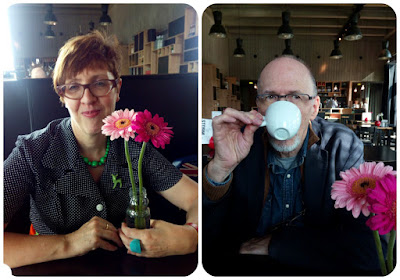 We ended our visit in the museum café, where we treated ourselves to a restorative cup of coffee.