It was clear that the wonderful late Summer weather wouldn't last. We are, after all, nearly the end of October, and already a month into what is supposed to be Autumn!

The forecast for last weekend looked very dire: we were promised wind blown days with lashings of rain.

As there was a charity shop event on Saturday and we expected to be inside most of the time, we didn't really mind, but were nevertheless pleasantly surprised to be greeted by a timid sun when we woke up. 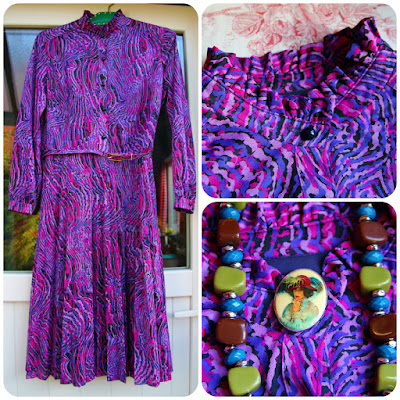 I love the print of this dress, with swirls of purples and pinks, as well as its floaty, lined fabric.

However, once I put it on, I wasn't too sure. In spite of the funky print, the dress's shape is a bit frumpy, especially with its high frilly collar. If I remember correctly, it originally even had a ribbon tie, which was bothersome and therefore swiftly removed.

Wearing the collar open looked a bit silly, but then again, so did wearing it closed! I was about to consign it to the give-away pile, when I thought of a solution: why not emulate those turn of the century ladies and wear it with a brooch pinned to the collar? 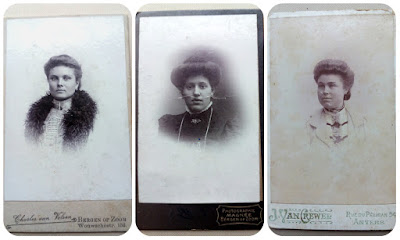 These photographs were all in a box which came from my Mum's side of the family. While I haven't got the slightest idea who the ladies on the left and right are, the one in the middle is my great-grandmother Aloysia. I do wish I'd inherited her hair!

My "brooch" is actually a scarf clip, one of a handful I've picked up while brooch hunting. 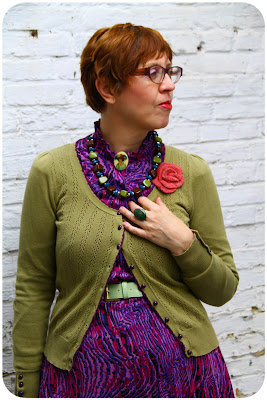 I also replaced the existing narrow self-fabric belt with a wider, green one, breaking up the expanse of  fabric. I chose green, as I already had a cardie in mind to wear with the dress, in olive green trimmed with purple and sporting purple buttons!

Still finding the dress too plain, I then added a necklace, its olive green beads (a nod to the cardie) accompanied by petrol blue and brown ones. 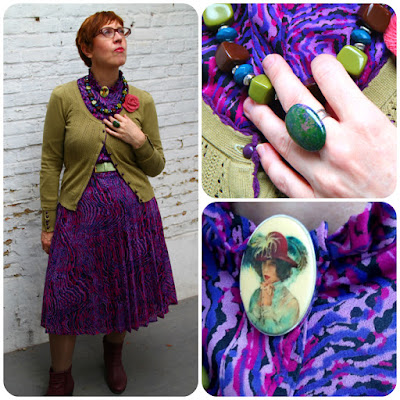 My final piece of jewellery was this green-stoned ring, which has swirls of pink in it, referring of course to the lilacs and pinks of the dress. I also added a pink flower corsage to the cardie. 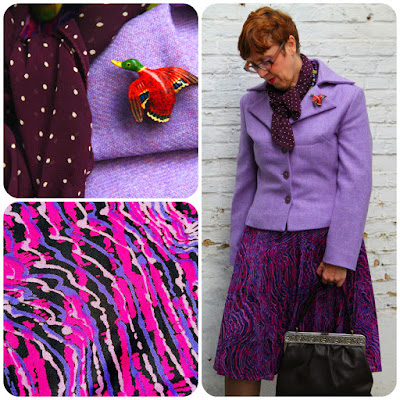 My outerwear consisted of my recently bought lilac woollen jacket, to which I pinned a wooden duck brooch, a spotty aubergine scarf and my burgundy booties, which have been to the cobbler's!

On my arm, the brown handbag with the fishies I found at the flea market a couple of weeks ago. 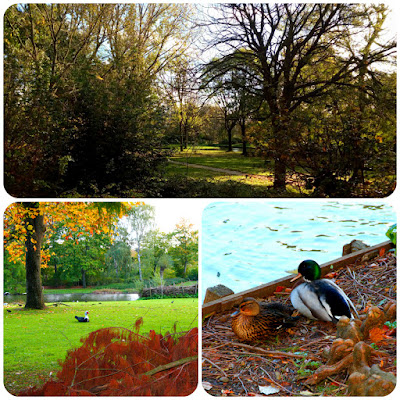 When we returned to our car after our first charity shop, we couldn't resist nipping into the park for a a little turn. The sun had disappeared by now, and we took an umbrella as dark clouds were threatening to release the forecasted rain.

But we shouldn't have bothered as the wind had soon dispersed the clouds and more and more patches of blue sky started appearing.

Autumn has begun in earnest here, painting the leaves in golds, reds and browns. 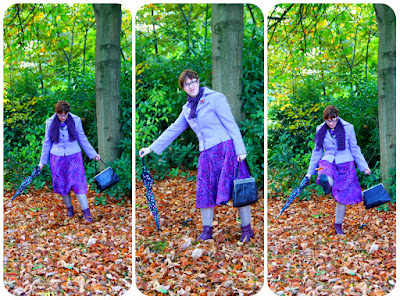 The wind rustling in the tree tops makes them dance, then gently float down to join the thick blanket underneath, prompting a leaf-kicking moment and a bit of silliness. 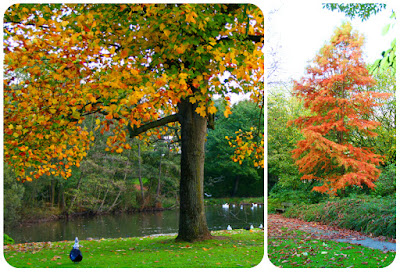 Some of the trees stand proudly ablaze with colour, trying to hold on to their bright Autumn splendour for another day. 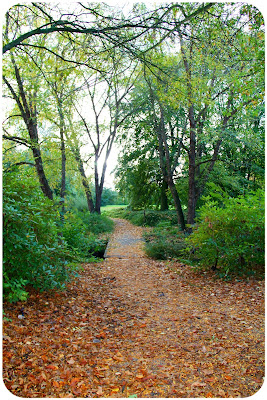 A winding footpath leads you to the heart of the park, leaves crunching beneath your feet with every step and, in spite of the busy road nearby, it's easy to imagine you're walking on a woodland path, about to enter a fairy tale world and leaving civilization far behind. 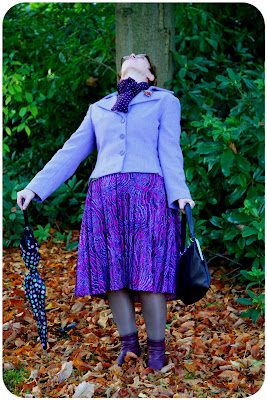 Looking skywards, the majestic trees seem to go on forever, taking on a Jack-and-the-beanstalk quality. Soon, the trees will be leafless and look eerie and forbidden in Winter's twilight. 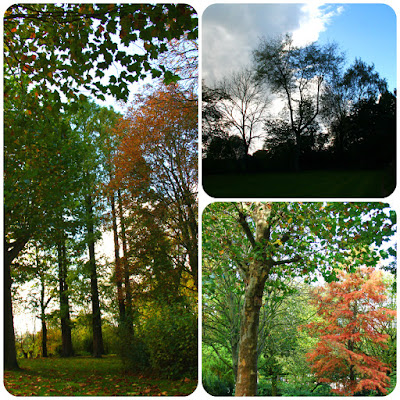 All too soon, we'll be saying goodbye to these bittersweet October days, so we'd better make the most of their sensory delights. 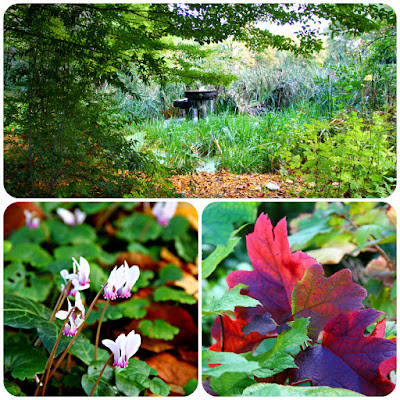 Foliage is dying down, seed-heads turning brown and shabby, while a lonely butterfly pauses on a patch of green to rest its wings and mourn Summer's passing. 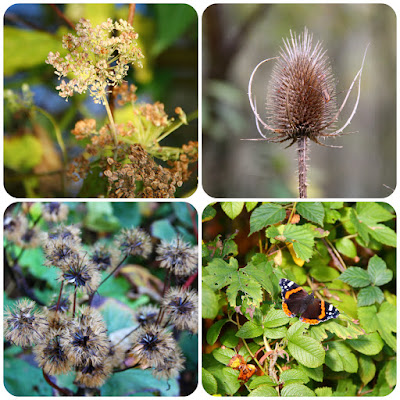 Limbs stretched and heads cleared, we returned to our car, and continued our charity shopping adventure ... 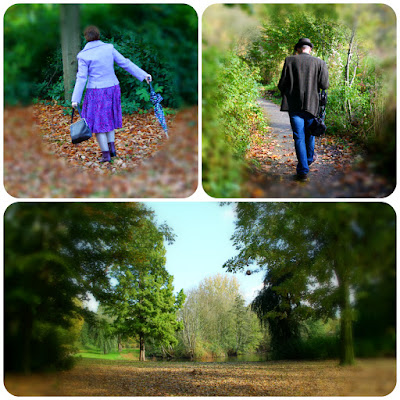 Posted by Polyester Princess at 19:06