Behind the scenes at the museum

With its multitude of collectible items, Dove Cottage doubles as a museum as well as our home! In fact, we keep telling visitors that we ought to charge them entrance fees! 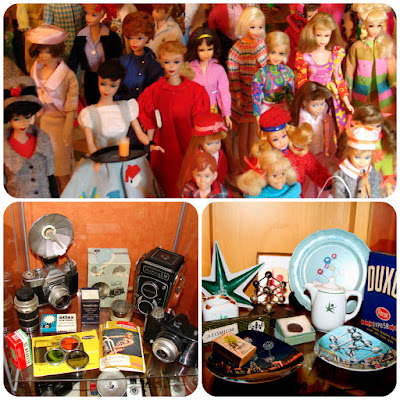 Due to serious lack of space (Dove Cottage is after all just a two up, two down, with extended kitchen and bathroom), some of our collections - vintage cameras, Expo 58 souvenirs and Pre-1973 Barbie dolls and their clothes, to name the most space invading culprits - had to be curbed.

I know I really shouldn't have rekindled my vintage paperback collecting as there is no shelf space left ...

At least, most of our kitchenalia collection is actually being used, though not the soaps and washing powders! 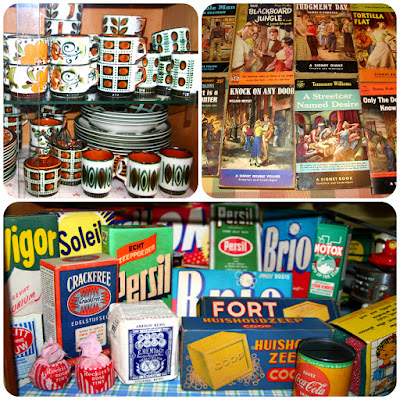 While my ever growing collection of brooches does not present the same problems, as they are small enough not to encroach too much on our space, they do present a problem of their own: that of decent storage.

At first, when I didn't have quite so many, empty cutlery boxes lined with satiny fabric were a great solution. But the number of boxes grew and grew, and - although I'd grouped the brooches by theme - it was hard to find what I was looking for, especially when getting dressed in the morning. 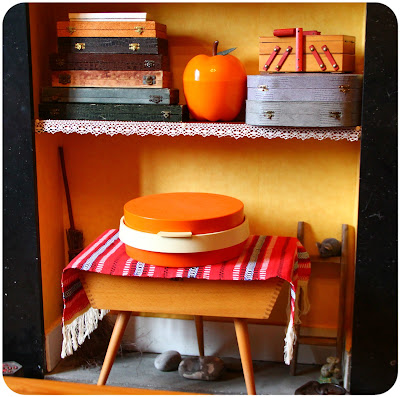 For a while, a 1970s round orange plastic jewellery box I found at a flea market last year, with separate compartments and a removable tray, was a godsend. It was my plan to put my current favourites in it, rotating them every couple of weeks or so. But guess what: it didn't happen. 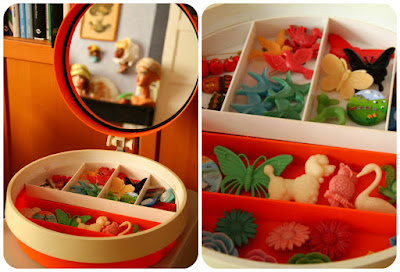 Meeting the brooch lady and a couple of rainy holidays in Wales meant even more growth in my collection, so that I had brooches lying around everywhere, which made me, the eternal Ms. Organized, break out in a sweat!

I had dreams of a storage unit, with shallow pull-out drawers which would hold all my brooches, but the actual thing has so far proved to be elusive.

A couple of week ago, one of Jos's friends, who is re-organizing his coin collection, asked him if we could use some shallow polished dark wooden drawer boxes. They were perfect but unfortunately there were only three of them, but hey, it's a start! 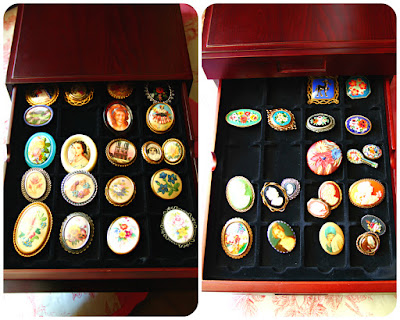 Two of the boxes were pre-lined with velvety dividers. The third one was empty, so I lined it with a  piece of red felt bought in a haberdashery shop, which was almost exactly the size of the drawer. 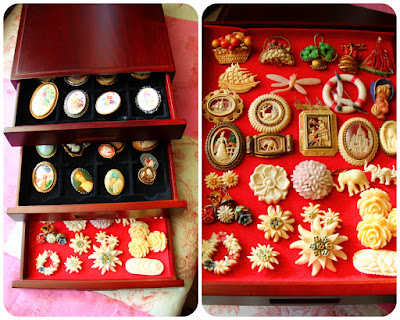 Then, on one of our recent charity shopping trips, we stumbled across these two plastic filing units, with four drawers each. Not exactly what I had in mind, but they will do for now. Especially as they were priced at only € 2 each. 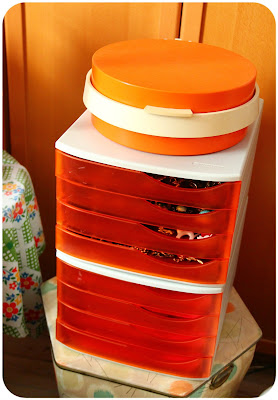 I gave them a good clean, lined them with felt, and spent half an hour or so every evening after work filling them and rearranging my collection in the process.

They actually don't look too bad and kind of match the jewellery box which now contains my modern brooches. 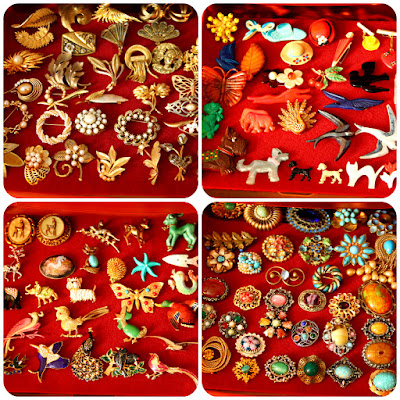 This also created the perfect opportunity to count them, so that I now have an exact figure (300 at the time of writing) instead of the rough estimate I've been bandying about.

On Sunday before last, we drove down to a nearby village, where a friend, who is one of the biggest - if not the biggest - collectors of Expo 58 memorabilia, was having a small exhibition. 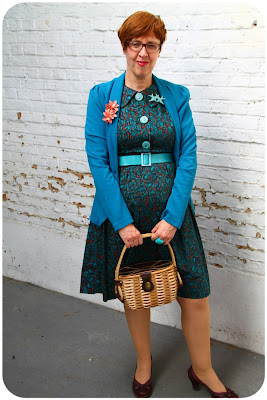 The weather was still gloriously summery, giving me the chance to dress appropriately for this event, in this handmade cotton 1950s dress I found for € 2 at Think Twice back in August. 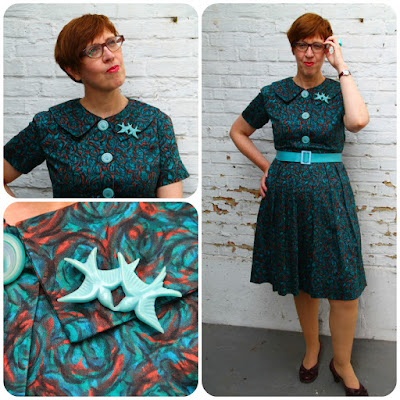 The buttons were replacements as I didn't like the original ones, but they are in keeping with the dress's age, as they came from my stash of vintage buttons. The brooch is modern, but I love its quirky retro feel, and they match the dress's buttons perfectly. 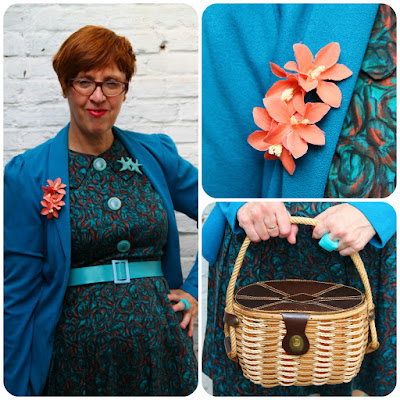 I wore my charity shopped King Louie jacket again, to which I pinned two hair clips in lieu of a brooch, but I took it off after the photos were taken, as it was far too warm for a jacket!

The cute little wicker handbag was the perfect finishing touch! 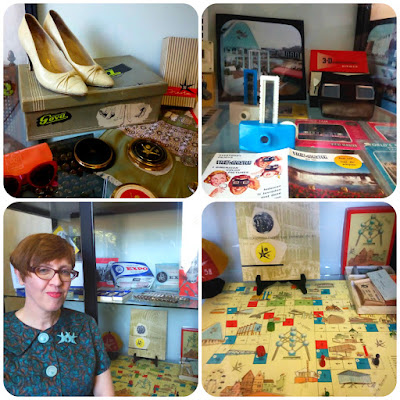 The Expo 58 exhibition was in one of the rooms of a local history museum, and contained quite a few rare items alongside the more obvious and commonly found ones. 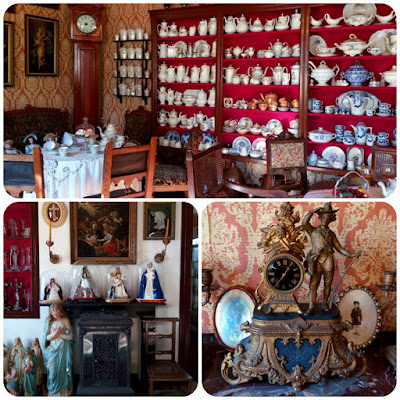 In passing, I'd had a little peek in one of the museum's other rooms, which looked intriguing, so we took the opportunity to visit the rest of the exhibits.

As this was totally unexpected, I didn't have my camera with me, so you will have to make do with photos taken with my phone's camera.

There was a room full of china in all shapes and sizes and another full of devotional objects.

I was quite taken by the ornate clock on the mantelpiece (bottom right), which reminded me of a similar one owned by my maternal grandparents. 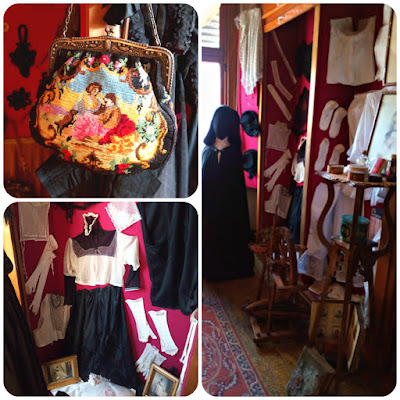 The first floor had some antique fashion displays, with lots of lacy garments and the most gorgeous little tapestry handbag.

The attics were a true treasure trove of kitchenalia, as well as the contents of an early 20th century village shop, the display of soaps being very reminiscent of Dove Cottage's, only on a larger scale. 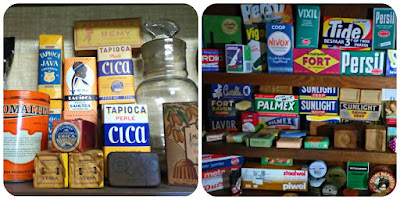 We'll have to go back one day and pay the museum a more extensive visit.

In the meantime, there is of course our very own little museum to enjoy!