It's oh so quiet

It was with more than just a sigh of relief that I got into the car when Jos picked me up on my final working day before the holidays.

However glad I was to leave behind the daily grind, my main source of stress and worry were the hordes of Christmas zombies which had been invading Antwerp that week. The city's main shopping thoroughfare, a wide pedestrianized street called the Meir, is just around the corner from my office. Although the street itself isn't within view from my 5th floor perch, I have been watching the toing and froing of the manic, multiple shopping bag carrying crowds in the lead up to Christmas for 26 years running.

In all those years, I have never known it to be this busy. The main contributors to this unprecedented number of shoppers were our neighbours from across the border.  As everything in the Netherlands is closed due to a lockdown, there's been a true Dutch invasion here, resulting in traffic chaos and streets rammed chock-a-block with throngs of people through which I had to wind my way to our pick-up point while Jos was desperately trying to find a parking spot. 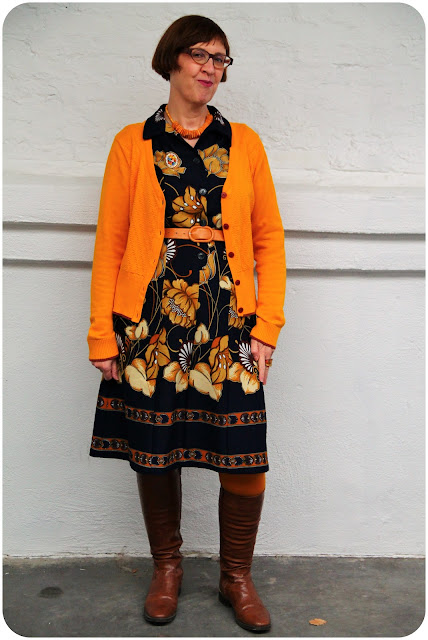 Apart from the 23rd of December being my last office day of the year, there was another piece of good news to brighten my day. That morning, I got a phonecall from Jos letting me know that the invite for my booster jab had finally arrived in our mailbox. As it was scheduled for the 4th of January, the deed will be done by the time you are reading this!
Having finished all the food shopping earlier that week, thankfully there was no need to join the last minute queues on Christmas Eve. If the weather gods hadn't insisted on throwing another spanner in the works, we would have gone for a walk. Alas, it was once again up to me to provide a daily dose of sunshine. Not that I wasn't happy to oblige! 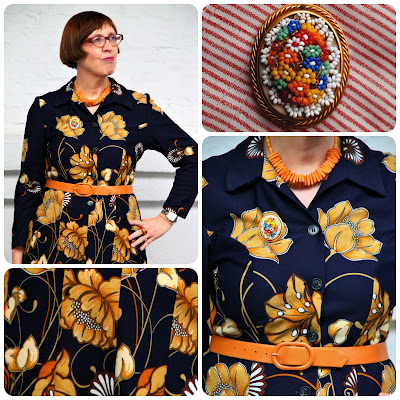 The pattern of flowers and seashells on my navy blue vintage dress set the tone for my accessories - notably my belt and necklace - as well as my cardigan and opaques, for which I picked a bright shade of butterscotch yellow.
The dress itself came from Think Twice, while the cardigan, necklace and belt were charity shopped. Both my opaques and boots were bought on the high street.
My vintage seed-beaded brooch, which Beate once said might be Bohemian, was a flea market find several years ago. 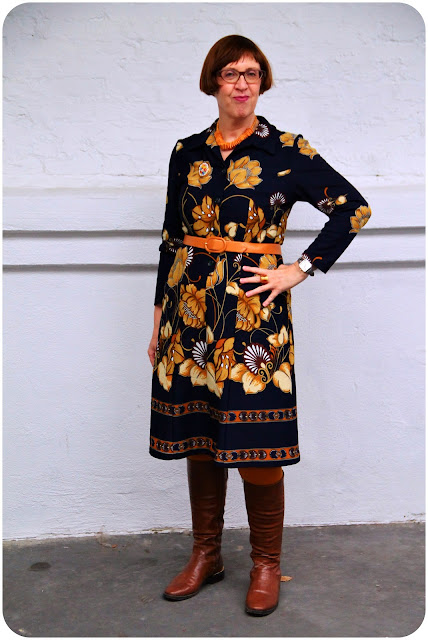 With any outside activities out of the question, we decided to give in to the siren call of the charity shops. We were kind of hoping they would be oases of quiet, which much to our delight they were. Neither was there any sign of the dreaded Dutch licence plates in the parking lot. Phew!
We'd just walked into our first shop of the day when we spotted a vintage sandwich toaster for our kitchenalia collection. It's the one on the left and it was made in France. The one on its right is English, made by Nutbrown, who have been producing traditional kitchen wares since 1932. It was found at a local flea market and has been in our collection for many years. 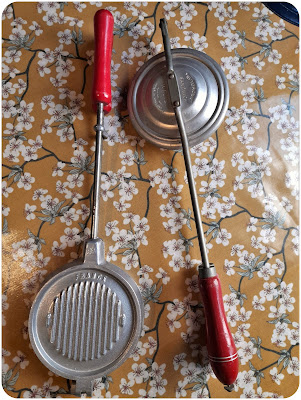 On to the clothing department!
On the left, a funkily patterned long-sleeved top by French label La Fée Maraboutée (a delightful name, which translates as The Good Fairy!).
The chocolate brown jumper on the right is missing most of its label. It has plaid cuffs and a detachable plaid collar, which I suspect were added by a previous owner. 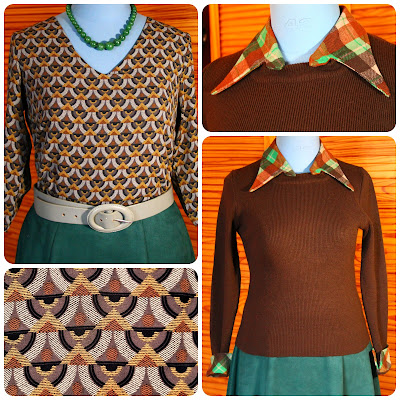 Nothing faux about this fur scarf, it is definitely the real thing. At € 1,25, I wasn't going to leave the poor thing behind, although I did have to wrestle it from a disappointing looking shop dummy. 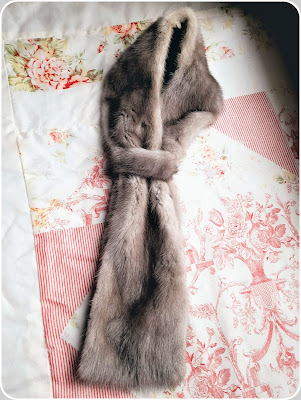 My final find here were the wide-legged Summer weight trousers by Belgian high street label JBC. I've added a close-up so that you can see the green stamens in the flowers which are all but invisible in the photo on the bottom right. 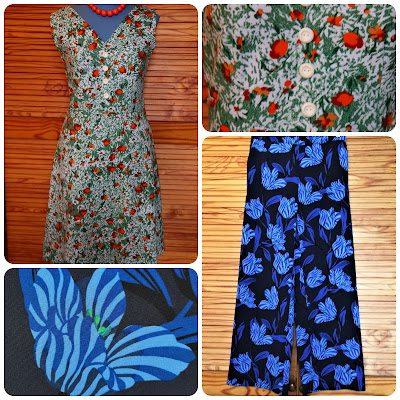 No crowds or Dutch licence plates in the second shop either :-)
Here, my usual rummage in the nightwear department in search of elusive vintage slips unearthed the vintage Summer dress on the top left. 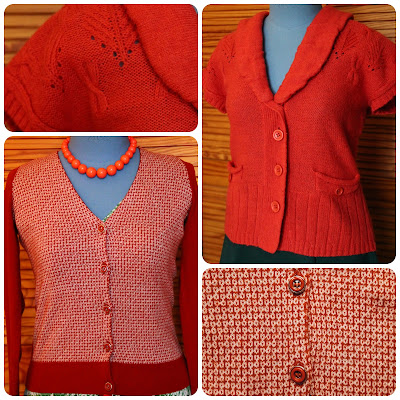 From the same shop are these two orange toned cardigans which have joined my burgeoning collection.
The tangerine short sleeved one with its shawl collar and decorative cable stitch on the shoulders is by the Belgian Terre Bleue label, while the burnt orange one with its patterned front and solid back and sleeves, is by Esprit. 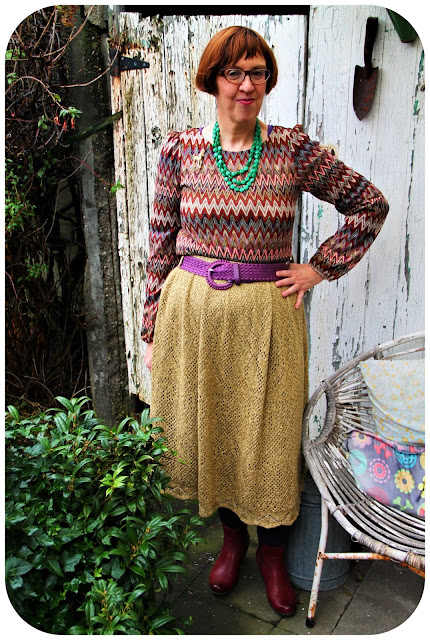 Although Saturday was Christmas Day, it didn't really feel much like Christmas at all. In fact, it started like any other Saturday by having fruit & yoghurt for breakfast and doing a load of washing.
The weather was grey, with a bit of mizzly rain thrown in throughout the day and highs of just 6°C, which ruled out our customary Christmas walk.
I hadn't planned my outfit in advance but when I clapped eyes on the sage green crochet skirt in the first shop we visited on Friday, I had a feeling this was going to be part of it. Not only did it look sufficiently festive, it was comfortable enough for sprawling on the couch with my book and accommodating our Christmas dinner at the end of the day. 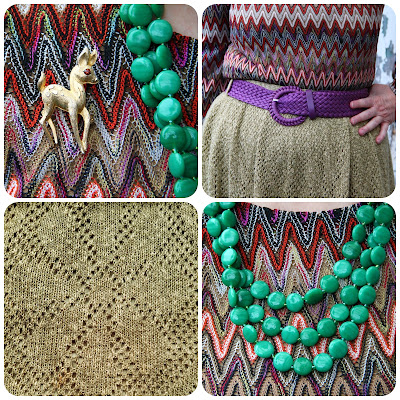 My blouse started life as a mini dress bought from a high street shop many years ago. When I found myself no longer wearing it, I gave it to my friend Inneke, who returned it to me last Summer. As I still loved its lacy zig-zag pattern, I attacked it with my scissors and turned it into a blouse.
I picked up the purple in the zig-zags with my belt, pinned a vintage Bambi brooch to the blouse and added a green multi-strand necklace I'd rediscovered when doing my necklace cull the other week. 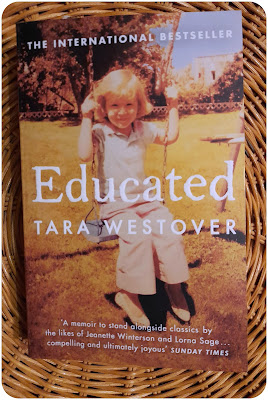 I was determined to finish my book, a memoir which, although enjoyable, was a bit of a distressing  read.
Born in Idaho to a father opposed to public education, Tara Westover never attended school. She spent her days working in her father's junkyard or helping her mother, a self-taught herbalist and midwife. She was seventeen when she first set foot in a classroom. She went on to be awarded a scholarship to Cambridge, where she earned a PhD in history in 2014. 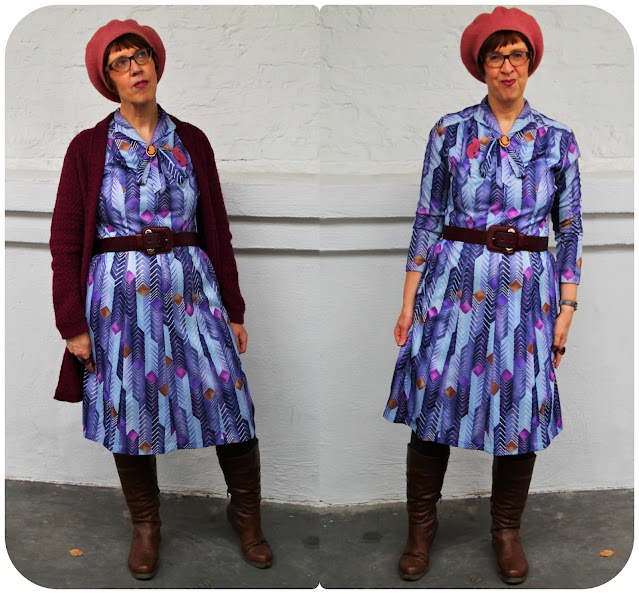 We slept late-ish on Boxing Day, or rather I did, as it was almost 9 am by the time I got up, after which we breakfasted on rolls and soft boiled eggs.

The weather forecast promised sunshine in the morning, followed by yet more rain in the afternoon, so we wasted no time in getting dressed and going for a head-clearing walk.

But let me show you what I was wearing first!

Scored for the princely sum of € 2 in one of Think Twice's famous sales, I still don't know what initially made me dither when I spotted this pussy-bow frock on the rails. When it looked as if a young girl would be beating me to it, I breathed an inward sigh of relief when her friend declared it too granny-ish. 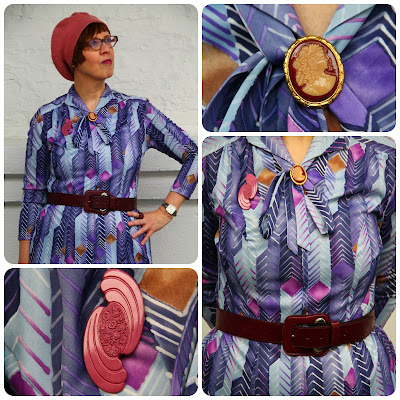 Too granny-ish indeed! Isn't that print, which manages to combine stripes, chevrons and diamonds in pinks and purples with the odd splash of burnt orange, just glorious?

At a mere 6°C, it needed a bit of layering so, apart from the camisole and slip I was wearing underneath, I wore a chunky, plum-coloured long-line cardigan on top. At my waist, a large-buckled belt in the same colour, while the pussy-bow was kept in check with one of my cameo brooches. The latter was joined by a vintage celluloid brooch in the same shade of pink as my beret. 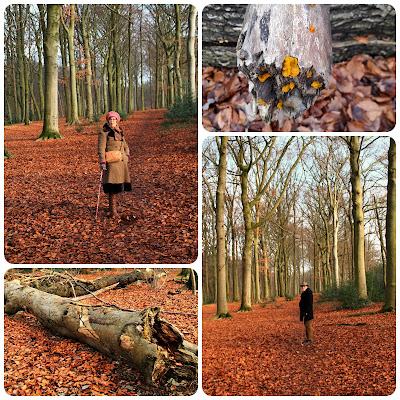 You can just catch a glimpse of my fur collared and hemmed Princess coat, which got one of its first outings this season.
We didn't want to go too far as the sun had already been playing hide-and-seek with the clouds while we were getting ready. The park in nearby Boom was declared the perfect destination.
Fortunately, the sun had stopped playing games by the time we'd parked our car, and was obliging enough to keep us company for the duration of our walk, which started with a good old crunch through a deep pile carpet of russet leaves. 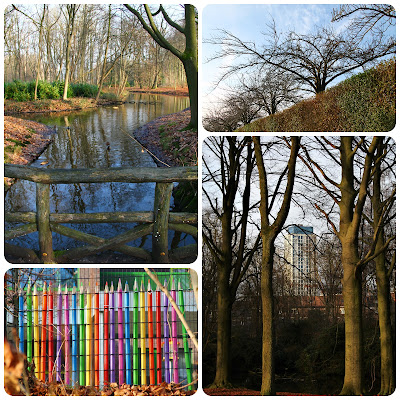 Instead of parking in our usual spot, we left our car at the other end of the park, from where it was only a short walk to its crowning glory: a modernist water and sculpture garden laid out in the early 1930s.
Hidden from view in the Summer months, we spotted the Braem Tower (above, bottom right) on the busy main road beyond the park. A high rise apartment building designed by the architect Renaat Braem - he of the Braem Pavillion in the sculpture park - in 1972, it has recently been declared uninhabitable due to problems with stability and fire safety.
The giant colouring pencils on the bottom left are fencing in a school playground. 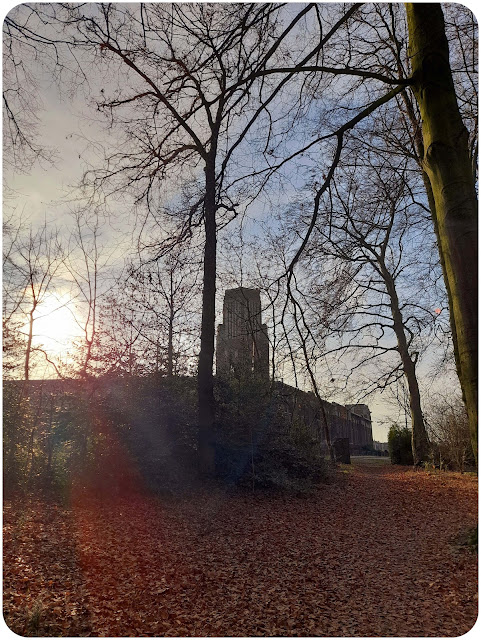 As we approached the water garden, the tower of the Art-Deco building across the road was looking enchantingly spooky in the blinding glare of the midday sun which was frolicking with the skeleton trees.
The building is Jos's old school, and was built between 1926 and 1930. 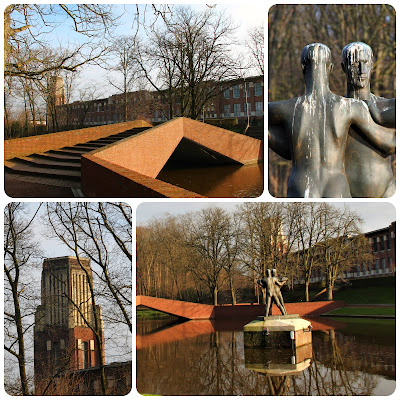 Pigeons were roosting near the top of the tower, and I pitied the bronze men - like all the sculptures here cleaned and restored as recently as 2020 - who seem to be their favourite target. The sculpture is called Solidarity and is by the Belgian artist George Minne (1866 – 1941).
The tapered end of the park is dominated by three sculptures by Ernest Wijnants (1878-1964). These winged creatures are called Victory, Advancement and Reflection. 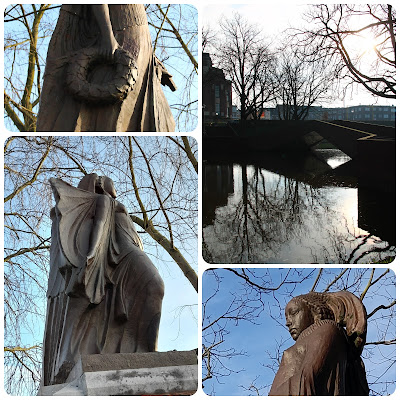 If at first it looked as if the weather forecast for rain in the afternoon was wrong, it soon started clouding over once we got home, followed by the promised rain.
The rest of the day was spent mooching around and eating Christmas leftovers for dinner, As one does on Boxing Day.
I'll be back with more non-adventures of the in-between week in a couple of days. I hope to see you all again then, and in the meantime, please do stay safe!
Posted by Polyester Princess at 19:14