Although my return to the office after the Christmas break wasn't nearly the hardship I'd expected it to be, the week did seem to drag on forever. It wasn't so much my workload, which was more than bearable as, apparently, lots of people were still enjoying their holidays. No, it was getting up at the crack of dawn, which felt akin to being in the middle of the night, that made the week seem to last an eternity.

How I missed those sleep-ins and leisurely mornings of the week before! How I envied Bess who, after her early morning surge of energy, was already back in snooze-mode by the time we left the house.

But yay, I got to go home early on Tuesday, as I was booked in for my booster jab that day. As before, it all went like clockwork and, including the usual 15-minute waiting time afterwards, I was in and out within barely 20 minutes. And apart from a sore arm, which prevented me from lying on my left side that night, I seemed to have escaped any nasty side effects. 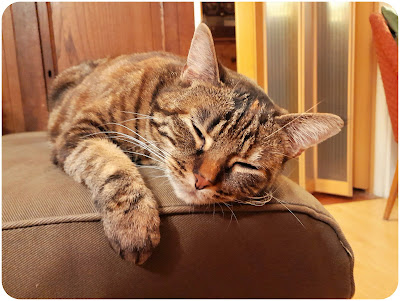 As schools were still on their Christmas breaks, and the sales had been in full swing since Monday, Antwerp was still heaving with shoppers, even if on Wednesday the non-stop rain seemed to have kept the worst of the crowds away. 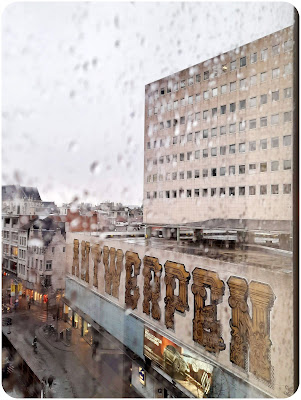 I hadn't bargained on feeling utterly exhausted and somewhat wobbly-legged on Thursday, and at first  my constant need to yawn, the heaviness of my eyelids and the slightly disoriented feeling had me stumped. But then I remembered I'd had exactly the same experience on day two after my second jab.
Somehow, I managed to drag myself through the day, the thought of a sleep-in on Friday keeping me afloat. I was feeling much better, if still a bit wobbly, in the morning, but wild horses couldn't have kept me away from the charity shops. After all, that's what Fridays have been for, lately. 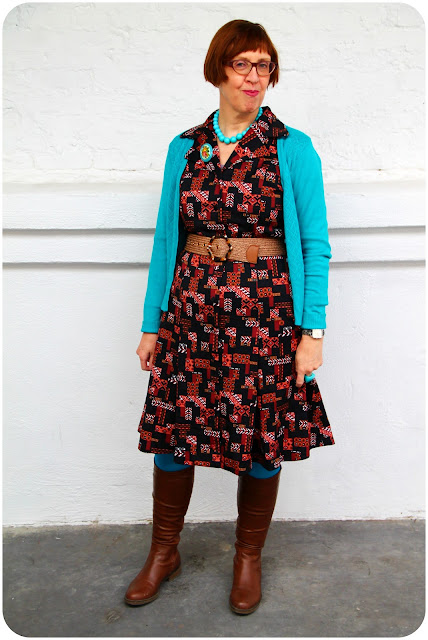 The day's outfit was centred around this black button-through vintage dress with its patchwork pattern in hues of rusts and browns. My blog tells me it was last worn in the week before we lost Phoebe which - eek! - is just two weeks short of one year ago!
I was tempted to wear the same turquoise belt with it as I did last January, but I kept myself in check, opting for one of my stretchy belts instead. This one, with its hexagonal buckle, was a cheeky retail buy last May, and has been worn countless of times since then. 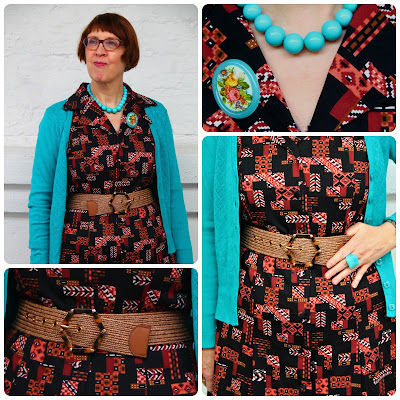 For my cardigan, opaques and further accessories, I opted for shades of cerulean blue. Apart from my ring and opaques - and my trusty brown boots - all were either charity shop or flea market finds. The blue rimmed plastic brooch with its bouquet of pink and yellow roses is a particular favourite.
The dress itself was a Think Twice find, as you might have guessed. 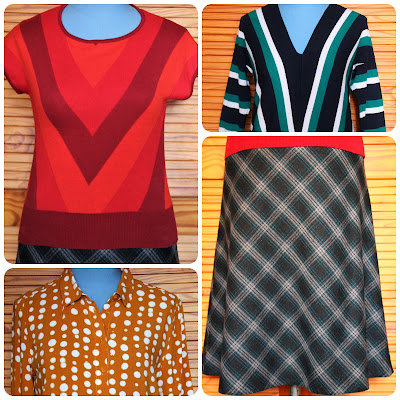 As usual, we visited two shops and, after indulging in some leisurely rummaging, we found treasure in both of them.
Lately, I'm always on the lookout for skirts, so it was practically a given that this grey-based tartan one patterned in off-white and teal, and originally from C&A, came home with me. The navy, green and white chevron patterned jumper with its deep V-neck is from the Danish Only label. You'll see me wearing this one very, very soon!
While Jos was having a cup of coffee from the cafetaria's vending machine, I happily trawled the aisles of the second shop and found another two items of clothing. What were the odds of finding another chevron patterned jumper? This wine, pink and orange cap-sleeved one is from Belgian designer Nathalie Vleeschouwer, and must have retailed for well over € 100. I paid the going price for jumpers in this chain of shops of € 6,50. The mustard yellow blouse with its tie-dye dots is by Monki. 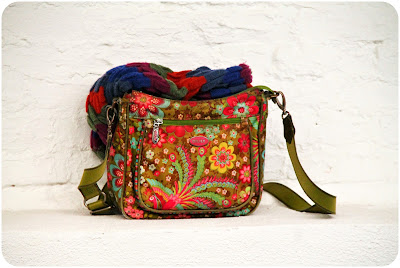 Oh, and I also grabbed this abundantly floral patterned crossbody bag by the Dutch Oilily label, which has replaced the cork bag I've been toting around during the weekends for nearly a year, and which was starting to show quite a bit of wear and tear. 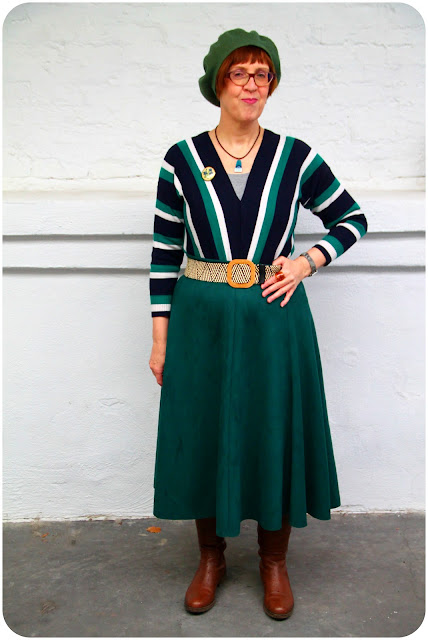 I told you I'd be wearing the Only jumper very soon, and I wasn't lying, as here I am the very next day, Saturday the 8th of January.
In fact, I'd had this outfit in mind only minutes after I'd clapped eyes on the jumper. And although things often do not quite work out the way they do in my head, this one certainly did.
The bottle green faux suede skirt was a sales bargain from Mango a couple of years ago and it's a firm favourite. In fact, its last appearance on the blog only dates from the 31st of December, when I took it for an impromptu walk in the park. 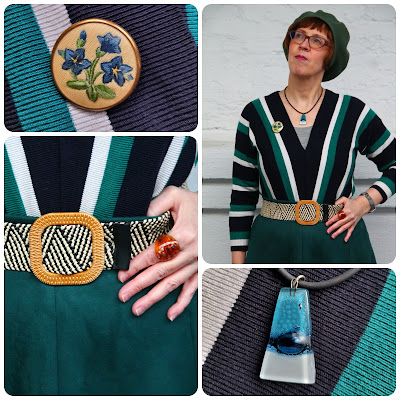 No walking was on the menu that Saturday, though. Same as Friday, it was an utterly grey and miserable day, which felt quite a bit chillier than the 7°C indicated by the thermometer. Not only that, showers were more than rife, so that huddling inside seemed to be our best option.
We had to run an errand, and then stopped off at one of the smaller charity shops in the neighbouring village of Reet. But before I tell you all about that, let's have a look at the rest of my outfit.
Due to the jumper's deep V-neck, I layered a neutral grey t-shirt underneath, for modesty as much as for warmth. The brooch I pinned to the jumper is a vintage one found in a Carmarthen antiques shop during our Welsh holiday in June 2017. It's got tiny embroidered Gentian flowers. The necklace was a flea market find, while both my ring and chevron patterned stretchy belt were retail buys. 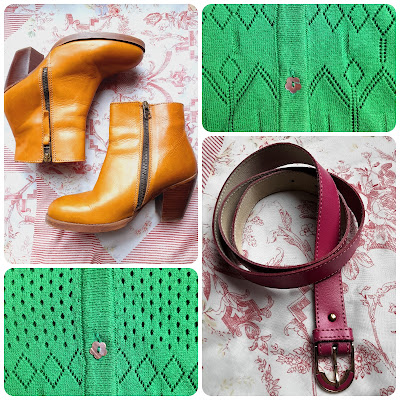 I'm happy to report that we didn't leave the charity shop in Reet empty handed. In fact, our bounty consisted of a rainbow of colour provided by a pair of golden yellow Sasha ankle boots, a fuchsia leather belt and a green ajour patterned cardigan by Belgian label Lucy has a Secret.
Not bad for a small back-of beyond shop! 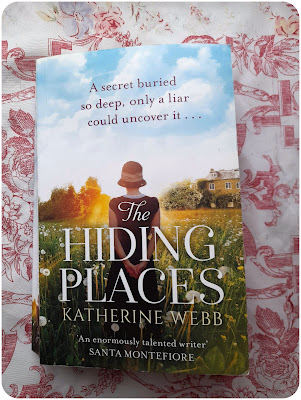 The rest of the day was spent pottering and reading, finishing my previous book and starting a new one. This is already my fourth novel by Katherine Webb and just like the others, it does not disappoint. I haven't finished it yet, though, but expect to do so this weekend. 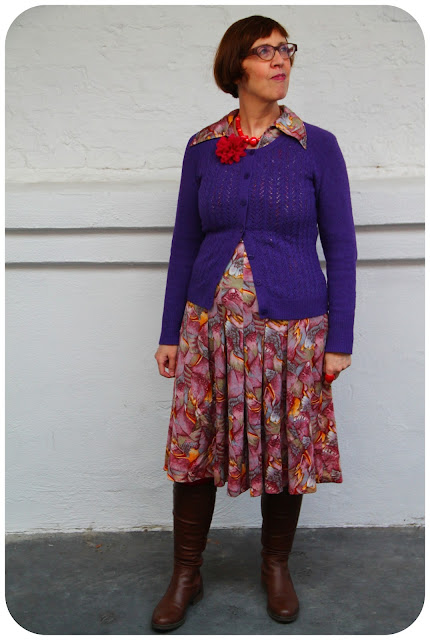 Sunday promised to be the best day of the week,  Although the temperature remained stuck at 7°C, there were patches of blue and the odd sunny spell.
Needless to say, we were off for a walk, for which I donned a warm wool-blend vintage dress to combat the chill.
Its vibrant watercolour print invites the use of many different colours to accessorize it with. This time I picked up the reds in its print with a red glass ring and ditto necklace, while a red plastic cat brooch was pinned to its bodice. 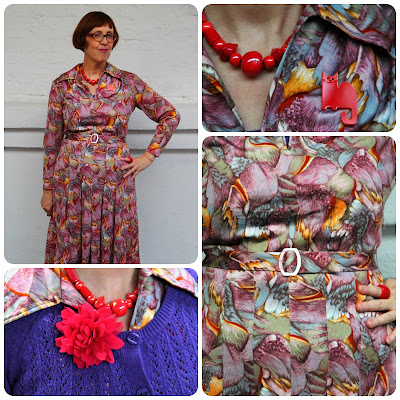 Unusually for me, I decided not to replace its belt and wore its original self-fabric one, which has a delightful transluscent pink plastic buckle.
The chunky purple cardigan I layered on top is Esprit by way of a charity shop. For good measure, I clipped a rose red flower corsage to its collar. 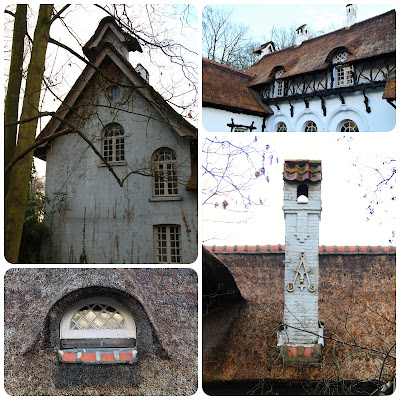 As the sun had been playing her usual game of hide and seek with the clouds, which at times took on an ominous shade of grey, we decided not to venture too far. An almost obvious choice for such last minute walks is, of course, Middelheim, the inimitable sculpture park.
Unusually for a Sunday, there was lots of parking space near the main entrance, although we did have to trample through some muddy patches and puddles to get there.  I'd come prepared and exchanged my brown boots for a similarly hued old pair which resides in the boot of our car.
The fairy-tale like cottage in the above collage is the old gardener's cottage belonging to the former castle domain. The castle itself currently houses a café and the museum shop. 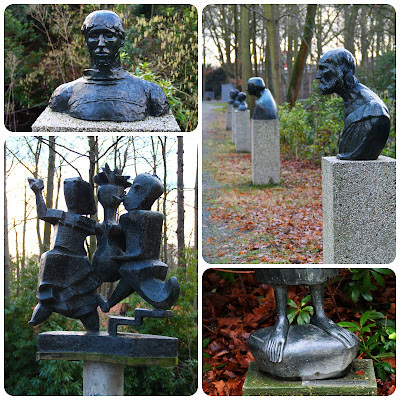 We wandered at will, enjoying the fact that there was hardly anybody around. Even the annoying groups of smartphone gazing Pokémon hunters seem to have dwindled lately.
The strange creatures on the bottom left are called The entomological elopement III. They date from 1957, and are by Swedish sculptor Eric Grate. I was rather intrigued by the strange toes of the creature on the bottom right, but forgot to take note of its identity. 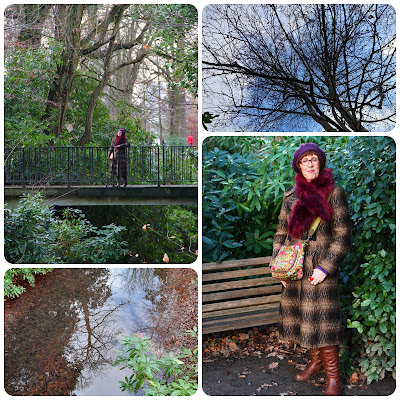 The sky had been steadily darkening until, just as we'd reached the Braem Pavillion, the heavens opened and we had to take shelter under its awning. In spite of the uncertainty of the weather, we hadn't had the presence of mind to bring an umbrella! 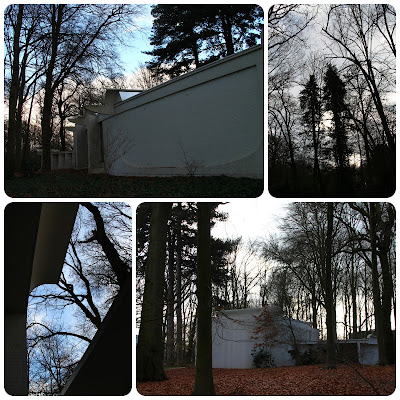 But soon the number of raindrops we could see plinking in the puddles seemed to be lessening, so we daringly left our shelter and continued to the museum café. Here, we had coffee and cakes sitting on the terrace, the canopy supplied by a battery of giant umbrellas keeping us dry. Although it had virtually stopped raining by then. 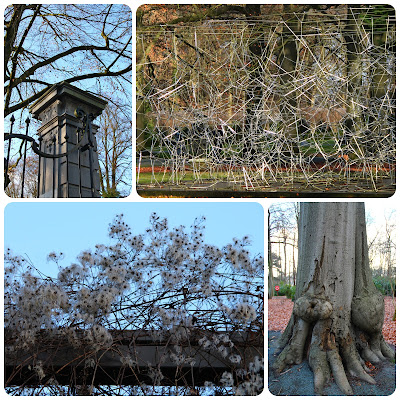 Then we made our way back to our car, passing Antony Gormley's sunlit Firmament III and a firmament of fluffy Clematis seed heads along the way.
Posted by Polyester Princess at 19:09