The high hopes we'd had for going on some outdoor adventures during the Christmas break were soon dashed by the weather forecast. Things were looking pretty dire for the week ahead but we kept hoping, quite possibly against hope, that they got it wrong. After all, it wouldn't be the first time, would it? One can only dream and I, for one, am a pro at living with my head in the clouds!

They didn't get it wrong on Monday the 27th of December, though. There was nothing for it but to grin and bear it and spend the day inside.

As I still had a whole week of freedom ahead of me, I wasn't too bothered about the uncooperative weather gods. I don't get bored easily and there's always a list of chores to be ticked off if needs must. First on my list, however, was getting dressed, indulging in the luxury of time to do so. 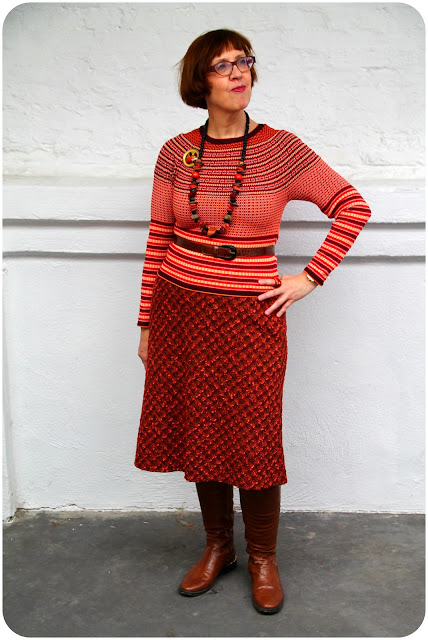 I'd had my eye on this jumper for a while, thinking it was time it got another outing. Although it's from Zara - by way of a charity shop - it has a definite Mid-Century look.
Trawling my blog, as I wanted to make sure I wore it differently, I noticed that funnily enough its last wears dated from December 2020 and December 2019 respectively. I'm such a creature of habit!
The skirt I went for this time was this recently charity shopped bouclé one, its colours harmonizing with those of the jumper. 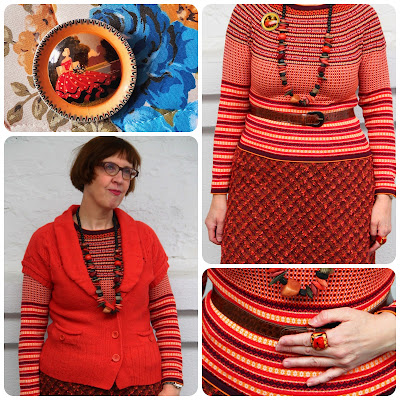 Same as in its two previous incarnations, I wore it belted on top of my skirt, although I did have the presence of mind of wearing a different belt each time. Funnily enough, I've only just noticed that I pinned the same brooch to it as I did two years ago, a small wooden plaque painted with a lady wearing a red and white polka dot frock. It was a flea market find, if my memory serves me right.
Both my beaded necklace, which is made of painted wood too, and my chunky short-sleeved cardigan, are recent charity shop finds. The boots are the ones I succumbed to after spotting them at a local shop back in November. They've been one of my most worn pairs so far this season. 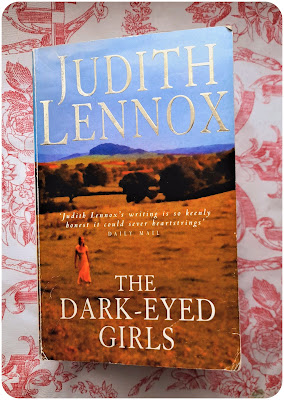 After Jos dropped off his supermarket purchases that afternoon, I accompanied him back to the garage so that we could make use of its white painted brick wall for outfit photos. We found a spot where the natural light - or what little there was of it - streaming in through the skylights was even much better.
Having finished my previous read on Sunday evening, I selected Judith Lennox's The Dark-Eyed Girls from my reading pile. Set in the late 1960s and 1970s, it tells the story of three friends and their changing relationships over the years. An absorbing and very enjoyable read, which I've all but finished by now. 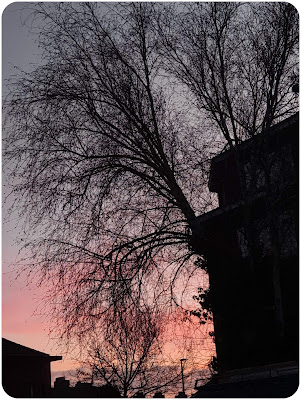 Waking up to a pink sunrise just after eight on Tuesday morning, we started getting our hopes up.
Needless to say, it didn't last, as a blanket of clouds soon moved in and it started drizzling while we were getting ready.
The weather forecast having promised a mild 11°C, I plucked this Swedish made vintage frock from my wardrobe, in a metallic polyester mix called Asplene + Sildorex. The latter, I guess, is a relative of  Lurex, as the dark olive green dress with its off-white, pink and lilac print and dropped waist, has quite a bit of sparkle in it. 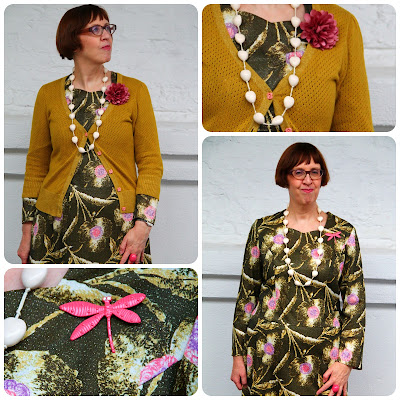 I took the lead from the pink in its print for my opaques, ring and dragonfly brooch as well as the flower corsage pinned to my cardigan, and wore an off-white beaded necklace.
One of my favourite pairs of boots, the green ones I charity shopped about two years ago, came out to play again.  The mustard cardigan with its pale pink buttons is by retro label Zoë Loveborn and was a charity shop find back in August.
We had an errand to run in a nearby town where, due to new shopping restrictions, we had to queue outside a telecom shop for at least half an hour. In spite of the supposedly mild temperature, there was an icy wind, so that I was half frozen by the time we were finally let into the shop. I won't mention the altercation we'd had in the meantime with an aggressive woman with a walker who was trying to jump the queue. Now, if only she'd asked nicely ... 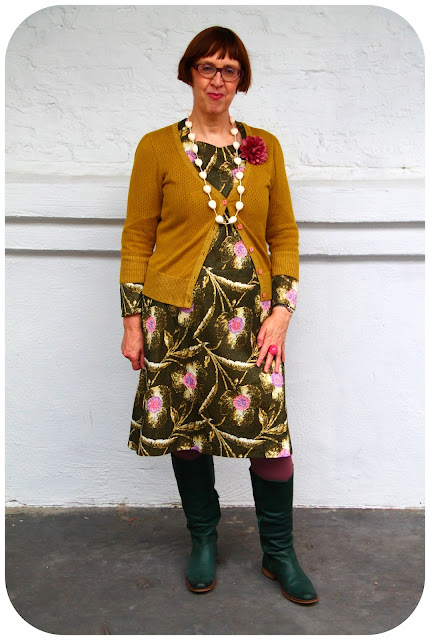 Before returning home, we nipped into an electricals shop as I needed a new hairdryer and we were looking for a replacement for our coffee machine which was on the blink.
Again, we made use of our garage's facilities to make outfit photos when returning our car after lunch.
On the way back, it started bucketing down so that we were soaked by the time we eventually made it home, having to hang up our dripping wet coats in the shower. 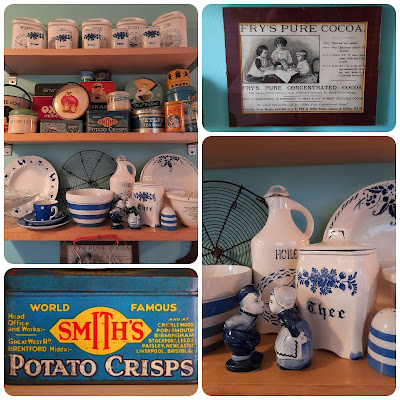 The couch was calling for another afternoon of reading, but I decided to ignore this for now and start ticking off at least one of the chores on my list.
I'm the first to admit that, apart from the odd cursory dusting, our kitchen shelves and their kitchenalia treasures hadn't seen a cleaning cloth for a while. I probably won't have to tell you that taking everything off the shelves, cleaning both the shelves and their contents and putting everything back approximately the way it was is quite a time-consuming task.
The fun thing is having a chance to look at everything as if with fresh eyes and indulge in the memories which are part and parcel of collecting. The Smiths crisps tin, for instance, takes me back to a delightful shop called Utter Clutter in Leominster, Herefordshire. 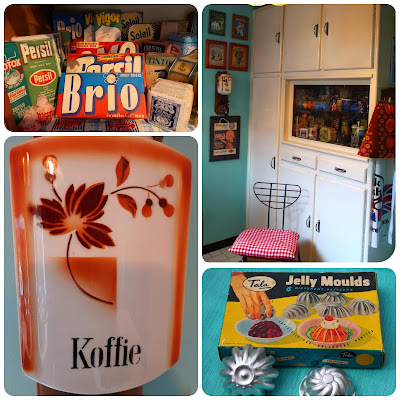 The packets of soaps and washing powders were picked up at various flea markets, while the 1930s ceramic coffee grinder was a present from my friend Inez.
The Tala jelly moulds came from an antique centre in Newcastle Emlyn in Carmarthenshire, Wales, a favourite wet weather option when holidaying in nearby Pembrokeshire. 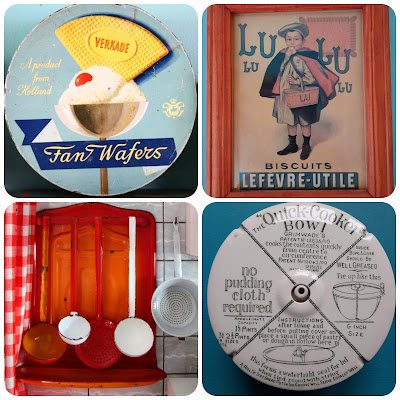 There are tins galore, including the ice cream wafers one from the Dutch Verkade brand, which was a charity shop find.  There's lots of enamelware too. The orange utensils rack and some of the ladles and strainers came from a vintage shop.
What were the odds of finding the Grimwades Quick Cooker pudding bowl, previously only seen in the kitchens of National Trust properties, on a local flea market here in Belgium?
The framed ad for the famous Belgian Lu biscuits is a reproduction found in the decoration aisles of a garden centre. 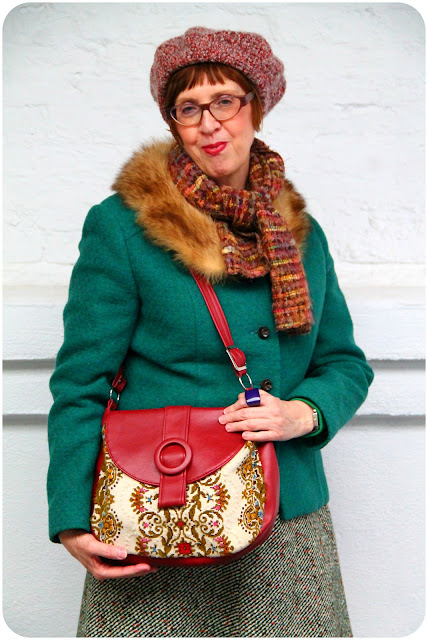 There was still no improvement in the weather on Wednesday, which was dark and rainy, and generally miserable, even if the mercury had climbed to 13°C by then.
With no obligations penned into our diaries for the day, we decided to do a round of the charity shops.
In spite of the mild temperature, I wasn't to be fooled again, so I wore my green with a bit of red tweed skirt and green fur collared vintage jacket. My scarf of many colours has featured here countless times before, but it has been a while since I wore the pink and white speckled knit beret. 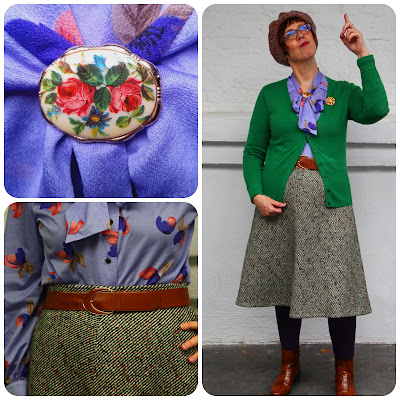 While searching through my flea market boxes for something which I've probably sold on a long time ago, I came across this vintage lilac Diolen pussy-bow blouse. And no, I haven't got the faintest idea why I decided to part with it, but it must have been in a moment of madness. With its pattern of purple and orange flowers, I thought it was just perfect with the skirt.
I tamed the bow with a flower infused vintage scarf clip and added a tan belt at my waist. A green cardigan added extra warmth layered over the rather flimsy blouse. To tie in with the purple bits in the blouse's pattern, I wore a pair of purple opaques. 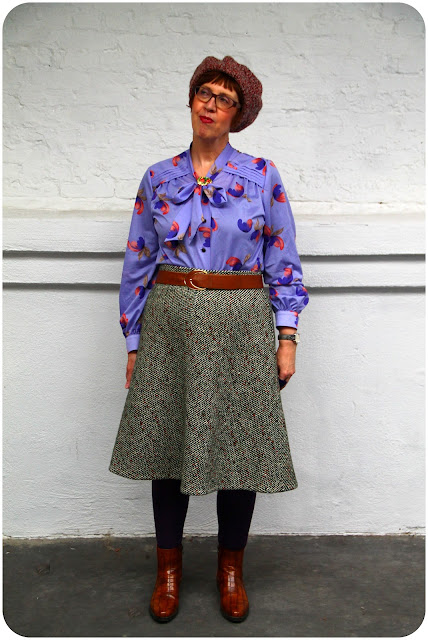 As usual, we visited two shops that day, starting with the Oxfam one in Wilrijk. Although pickings weren't plentiful, finding this tailor made vintage skirt suit more than made up for this. Both Angelica and me are doing the honours of modelling it for you. 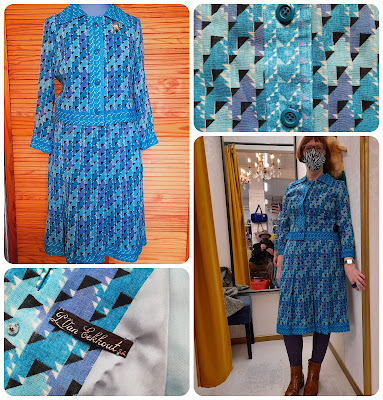 There was also a vintage coffee tin, from the Belgian coffee brand Rombouts, which was founded in Antwerp in 1896. It dates from the late 1950s, and this one has some iconic Bruges scenes on it, with the belfry on one side and the city hall on the other.. 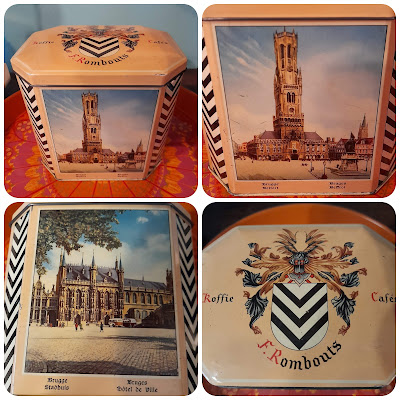 Our shopping trip ended at our most local charity shop. Here, I was in luck again, as I found a vintage C&A jumper in a lilac and silver cable knit with an asymmetrical collar.
A mustard yellow knit beret and a chevron striped Summer skirt by Belgian retro label Who's That Girl were my final finds. 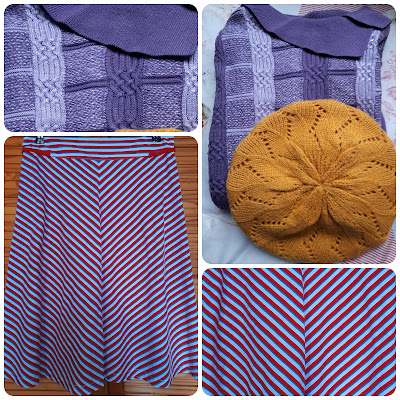 I'll be back with the rest of the in between days later this week.
With the Omicron virus rampaging out there, please do take care to stay safe!

Posted by Polyester Princess at 18:33