The mists of time

The weather continued to be a mixed bag in January's second week, with temperatures not exceeding 5°C, and culminating in a fog cloaked day on Thursday the 13th.

This was my view just minutes after arriving at the office.  Antwerp's cathedral should have been taking pride of place in the photo on the right, but the fog had obliterated it completely. Although quite disconcerting, the denseness of the fog meant that I didn't have to look at the scaffolding which has been disfiguring the cathedral tower for the better part of three years. 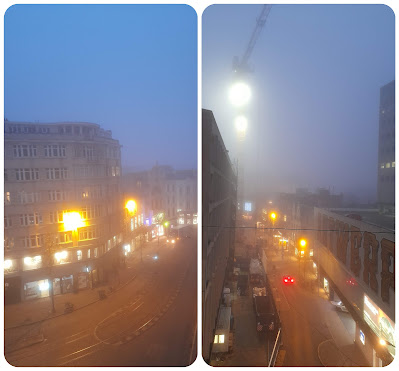 Sadly, the view from my office window is further marred by a tower crane and a building site, as the Art Deco skyscraper which faces it is undergoing major renovations. Accompanied by an almighty racket from morning until evening, I should add. But even the tower crane was hardly visible that morning, the halo of its floodlights joining the general cacophony of city lights. 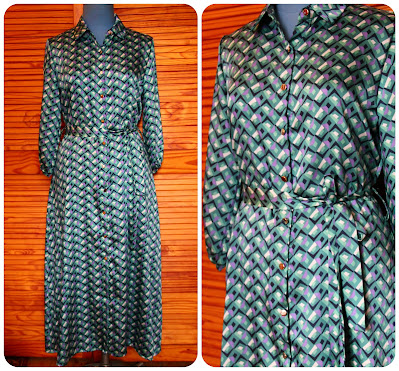 The school holidays finished on both sides of the border, Antwerp was no longer under siege from an army of shoppers, so that I tentatively left the safety of the office during one lunch break.
I even did some shopping of my own, snapping up a dress - one I'd previously lusted after - from a high street shop - at half price. 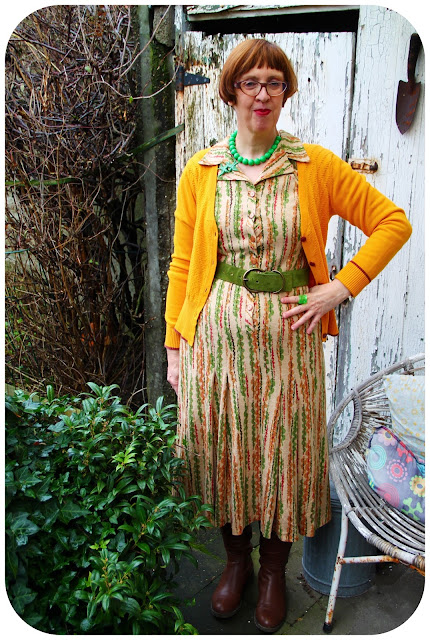 The fog persisted overnight and was still with us on Friday morning, although the sun would be making several attempts to find a chink in the armour. With the world outside reduced to greyscale, it was once again up to yours truly to provide a smidgen of colour.
It had been a while since I last wore this wool and polyester blend dress, snapped up for € 4 in the Think Twice sales in December 2019. It was a lucky find, deadstock with its Made in Austria label still attached. 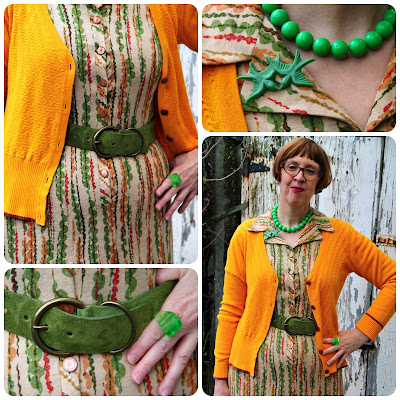 It was its pattern, featuring green, red and orange squiggles on a beige background, which attracted me in the first place, offering a plethora of accessorizing possibilities.

This time, I took my lead from the green squiggles, using that colour for my necklace, belt, ring and birds-in-flight brooch. I was wearing green opaques as well, but they're not visible in any of the photos, not even a cheeky peek!

I thought the outfit needed an extra dose of sunshine, so I opted for bright orangey yellow for my cardigan. Charity shopped back in November, it has proved to be surprisingly versatile. 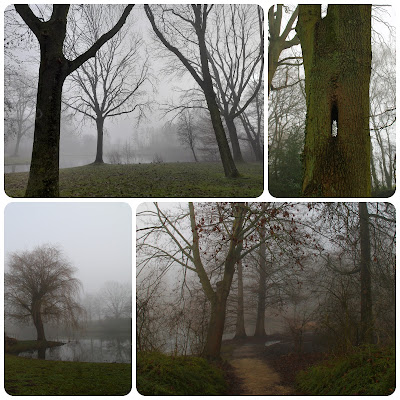 We did our weekly round of the charity shops that morning and finds were plentiful. If you'll bear with me, I'll show you some of them later in this post.
However, I was determined to stop off at the park in Duffel in between shops in order to go for a stroll and capture some of the day's misty magic. 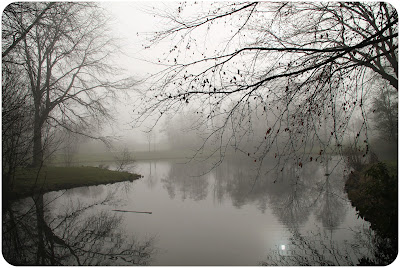 The blanket of fog swaddling the park was opaque and almost impenetrable, the sun a mere pinprick reflected in the pond.
The grassy field beyond the bridge, which is set alight by a fiery carpet of bald cypress leaves, suddenly appeared like a Fata Morgana, a sole splash of colour in a monochrome world. 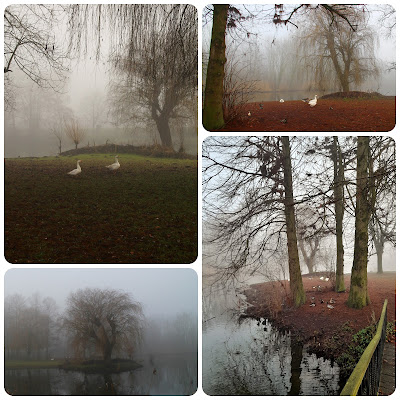 We walked along the towpath of the River Nete which runs next to the park. The fog was even denser here, the opposite bank of the river completely obscured from view. Not even any silhouettes were visible in the distance, so that it felt as if I was walking towards the end of the world. It was a truly otherworldly experience eliciting both claustrophobia and elation. 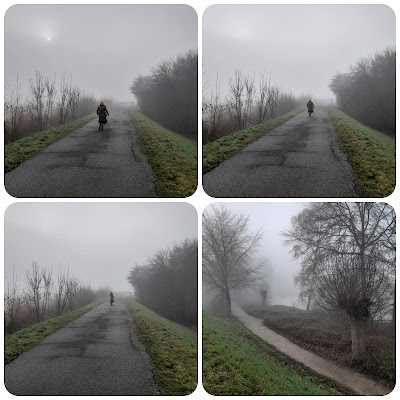 We descended from the towpath as we neared the castle ruin at the end of the park.
Here, visibility was greatly improved, and there might even have been some hesitant rays of sunshine penetrating the fog. In hindsight, the sudden sunny outlook might have been greatly improved by the pools of yellow supplied by my scarf and woolly hat, which were a gift from my lovely and colourful blogging friend Monica! 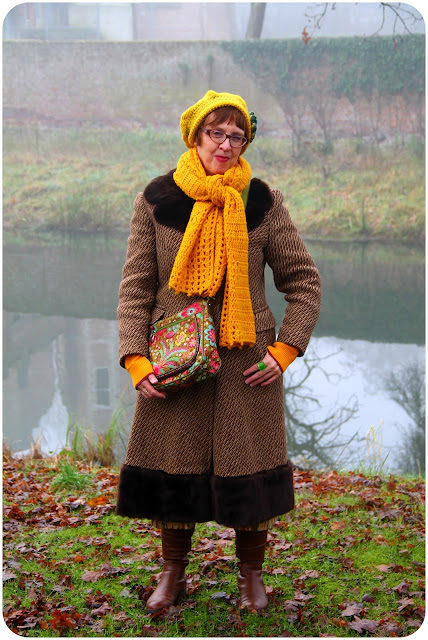 We are always glad to see the picturesque castle ruin still standing. There has been talk of renovating this evocative piece of history, whose origins date back to the 12th Century, and indeed fortifications were duly erected on the inside a couple of years ago, so that at least the tallest of the towers, which was leaning precariously, is prevented from toppling over completely. 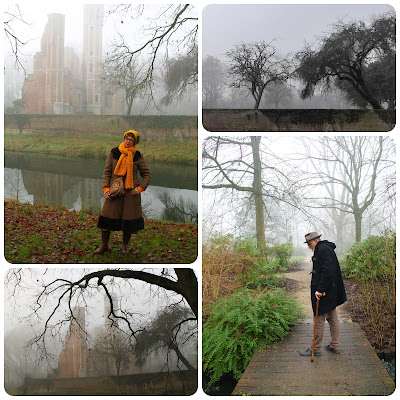 We were as captivated by the crooked skeleton trees jutting out above the castle walls and preening themselves in the water of the moat as we were by the fairy-tale like ruins themselves.
The trees on our side of the moat are reminiscent of ancient giants stretching out gnarled arms which, while offering dappled shade when fully clothed in Summer, now frame the castle ruin and lend it a haunted air. 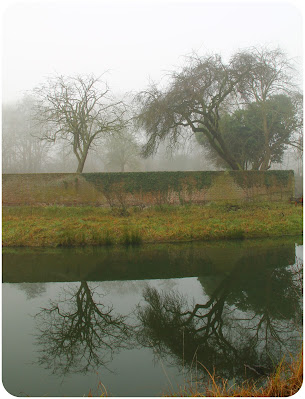 In spite of the greyness of the day, our walk definitely put a spring in our steps. As the rest of the weekend would be a complete washout, we were glad we'd made the effort.
There wasn't even enough daylight to properly photograph our finds, so these are the best of the bunch. On the bright side, I did have a little helper at some point ...
There were clothes and jewellery too, but I'm keeping these for another post. 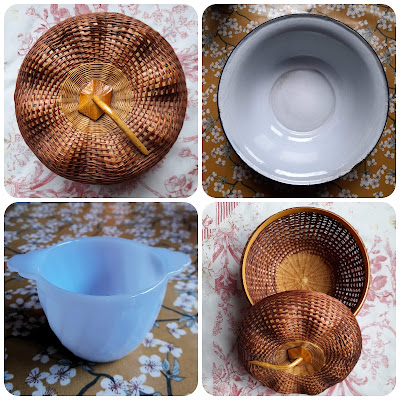 I was charmed by the wicker apple-shaped trinket box on the top left and bottom right. It hasn't found its purpose yet, but at € 1 it would have been silly to leave it behind.
Joining our collection of enamelware is the slightly battered old basin on the top right, its bottom proudly proclaiming that it was made in Belgium.
The small blue bowl on the bottom left is a Fire King sugar bowl in a colour I believe to be Azurite.
Fire King dinnerware and glassware products were produced by the Anchor Hocking Glass Corp. based in Lancaster, Ohio who, in 1942, began producing their now-famous line of ovenproof glassware products. 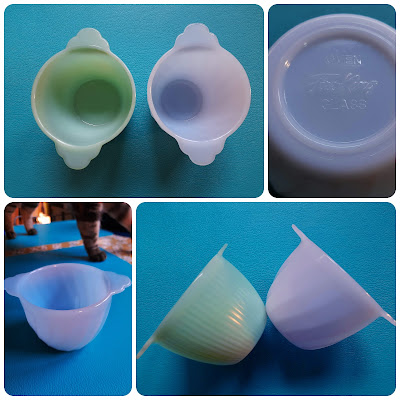 Their most popular design must be their Mid-Century Jadeite range, made in a delightful jade green opaque milk glass. Although we do not collect these as such, we have picked up some Jadeite cups and saucers, as well as a sugar bowl and milk jug, over the years. I'd never seen any blue Fire King in real life before, and the Azurite sugar bowl will probably remain a one-off at Dove Cottage, but I'm sure you'll agree I needed to give it a loving home. Especially at the silly price of € 0,50! 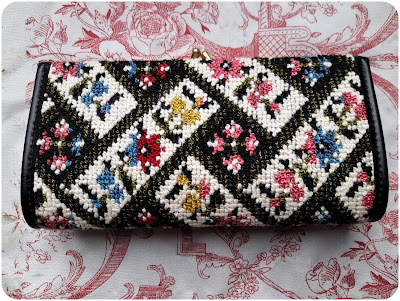 Nor could I resist this pristine tapestry purse or the beaded clutch, which were both priced at € 1,50. It's been ages since I found anything decent in that direction in the charity shops. 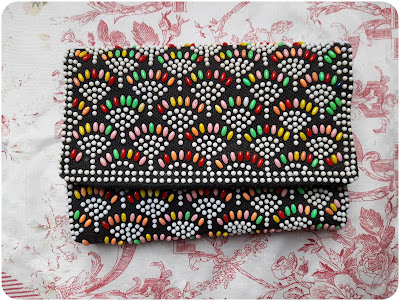 That's all I've got time for now. I'll be back with more January tales and finds in a couple of days.
In the meantime, I do hope that you are all staying safe! Who'd have thought we'd still be telling each other that after almost two years!

Posted by Polyester Princess at 18:59