It quite boggles my mind that we're almost half-way through January by now. Like it or not, I'm back to the same old working week routines and the benefits gained by the no-schedule pace of life in the in between days are slowly but surely wearing off. Secretly, I am glad that the silly season is over for another year, but I could definitely have done with an extra week of semi-hibernation.

My blog schedule, of course, is as topsy-turvy as it always is, as I've only just arrived at December's penultimate day. To make things even more complicated, these photos were taken a day later as the weather on Thursday, which had started out with a handful of sunny spells, soon deteriorated, reverting to the usual menu of granite grey skies and lashings of rain. By the time we made it to our garage, the dregs of the daylight would have made for poor photos, so I wore it all again the next day. 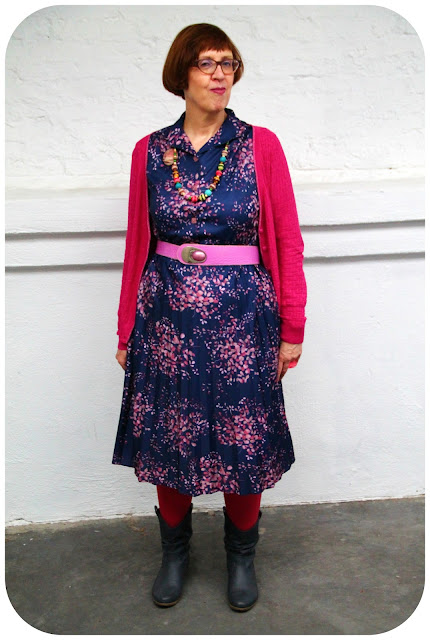 The fit and flare dress with its pleated skirt was yet another Think Twice find from way back. I fell for its purplish blue colour and sprinkling of pink flowers, but didn't care for its original buttons. Luckily, my stash of vintage buttons came up with these pink square ones which turned out to be a perfect match.
I added a fuchsia textured cardigan for warmth, although the mercury would climb to 15°C on the year's final days. Matching tights and a pair of greyish blue Western style boots completed my outfit. 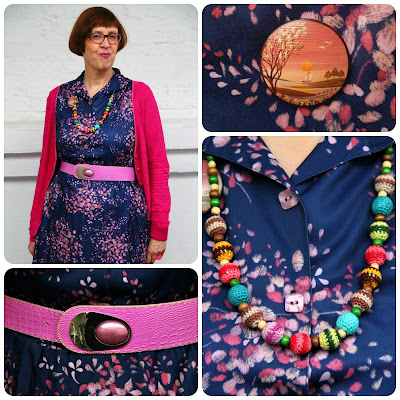 Now, let's have a look at my accessories which are, of course, an integral part of my outfit.
The starring role was played by the bubblegum pink textured belt with its white metal and pink gemstone trim. It has the 1980s written all over it but I can't for the life of me remember whether it was a Think Twice or a charity shop find. It isn't the first time I paired it with this particular dress.
The beads of my necklace, which are wearing woolly jumpers, added a bit of extra colour to my dress's profusion of pink flowers. My wooden brooch with its painted landscape was picked up in a charity shop in Middelburg while on holiday in Zeeland in November 2019. 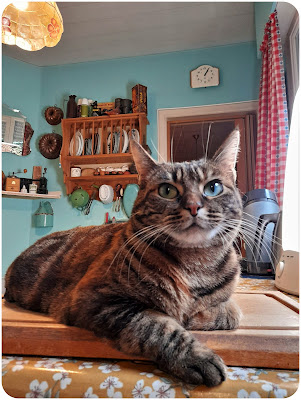 While Jos was out doing the year's final supermarket run on Thursday morning, I thought I'd made myself useful and continue with the gargantuan kitchenalia cleaning job I'd started on Tuesday.
I'm not sure if Bess was meant to help, but it is more likely that she was just supervising her staff. Whatever the case, although she might look very awake here, she was fast asleep by the time Jos came back with the shopping. 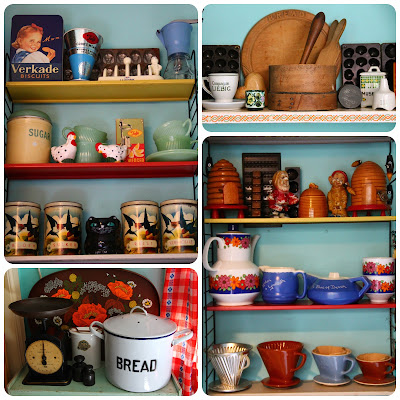 The shallow shelves on the top left and bottom right are by Tomado, a Dutch kitchenware company. Dating from the 1950s, they are collector's items in their own right.
Their contents are a jumble of heirlooms and collectibles as diverse as a Tala measuring cup and egg wedger, a set of 1930s canisters decorated with swallows, a range of Melitta coffee filter holders, a Devon Blue ware jug and teapot, a Lurpak toast rack and some metal chocolate moulds.
More chocolate moulds, in Bakelite this time, adorn the mantelpiece (top right), where they share space with a wooden flour sieve, butter pats, potato masher and bread board.
The 1970s St. Michael's serving tray, early 1900s scales, weights and enamel bread bin on the bottom left are displayed on top of a doll's wardrobe made for me by my Dad in the early 1960s. I was just in time to rescue it from the skip. 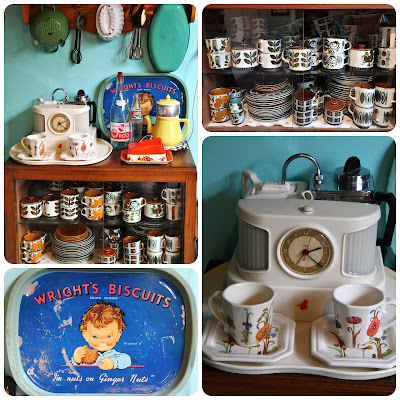 Proceeding to the glass-fronted cupboard which holds my collection of late 1960s Boch crockery. Although we set out to collect the iconic Rambouillet design -  the leaf patterned ones on the left of the top shelf - issued in 1966 for the pottery's 125th anniversary, we gathered some of their other designs along the way. They are in regular use and we tend the alternate the different patterns.
The cupboard itself was a € 8 charity shop find!  The contraption which lives on top of it is a 1950s Goblin Teasmade and was a flea market find back in April 2017. The slightly battered tray advertising Wright's Biscuits Ginger Nuts and featuring their mascot, Mischief, was a flea market find as well, predating my blog with many years. Having my blog has proved to be a useful tool for dating our finds but my memory often draws a blank for things we found before March 2016. 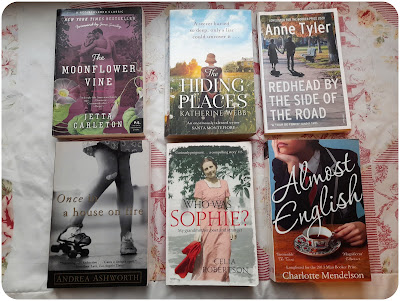 After lunch, the lure of the charity shops once again proved to be too strong, so we grabbed our coats and went off. Again, we visited two shops, starting with the one in Mechelen.
Here, the bookshelves came up trumps with no less than six books, although in hindsight I suspect I have already read one of them before. 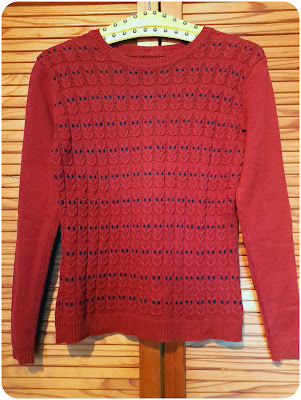 While Jos was taking a coffee break at our second shop, the one in Duffel near the park, I browsed the rails of clothing, falling hard for this jumper with its rows of cheeky knitted owls. There's no label whatsoever, but the remains of a care label in a side seam indicates that it wasn't somebody's handiwork as I'd originally suspected.
We're having a bit of a cold snap right now, so I've already worn it to work this week. Now that the worst of the hot flushes have subsided, I can wear jumpers again without having a sweat fest. 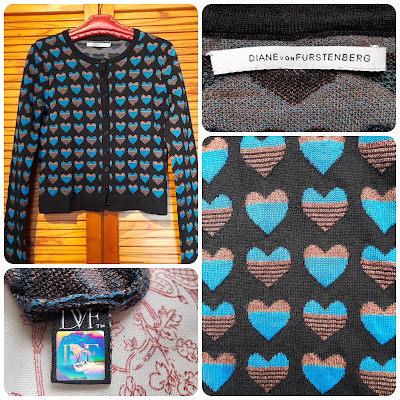 Before joining Jos, I plucked this heart patterned cardigan from a rail of plain black ones - the clothing is colour coded in this shop - and did a double take when I saw its label. I guess nobody'd heard of Diane von Furstenberg here, as it wasn't even on the more expensive luxury label rail. 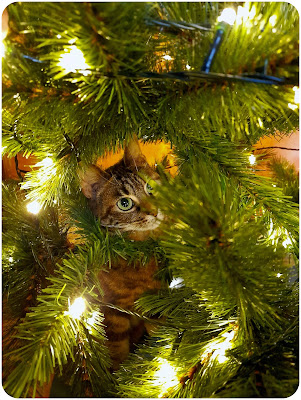 Back at home, we had one more task to tick off our list before calling it a day. For the last day or two, Bess's tree antics didn't confine themselves to merely dislodging the ornaments. No, she'd started chewing the fairy light and the faux fur branches with their dangerously prickly needles. She'd also managed to worm her way onto the lower branches of the tree. Therefore, there was nothing for it but to prematurely dismantle it. Oh well, it was fun while it lasted. 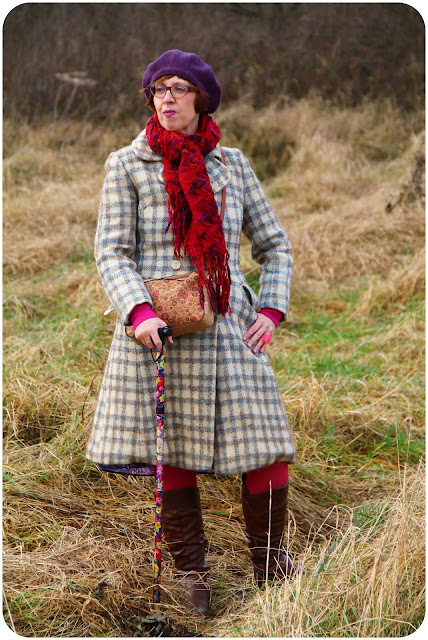 The sun had decided to grace us with her presence on Friday the 31st of December which, together with the forecasted 15°C, offered the perfect conditions for a walk.
Soon after our fruit & yoghurt breakfast, however, clouds had gathered once again, darkening the day as if with imminent rain. We dithered, and when we got a text from the shop we'd visited on Tuesday telling us the coffee machine we'd ordered was ready for collection, we decided to go and pick it up instead.
The sun came out again while we were having lunch, so without further hesitation, we donned our coats - in my case my old favourite cream, blue and fudge plaid one - and drove off. 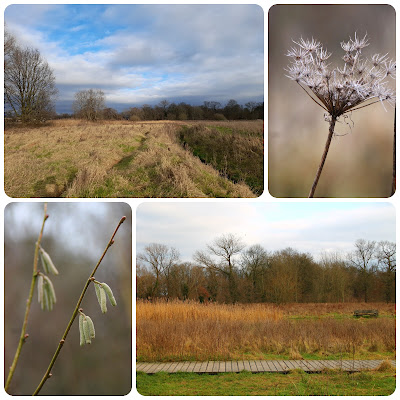 In spite of this only being in the next village to ours, we'd never been to the 15 hectares landscape park called Frijthout, which is only a stone's throw from the village's centre.
The word "park" is a bit of a misnomer here, as it's not really a park in the exact sense of the word. The emphasis clearly is on the landscape part of its name. The open space, where villagers used to be allowed to harvest logs, has been bought by the council and nature preservation as recent as 2007 and has been developed into a semi nature reserve. 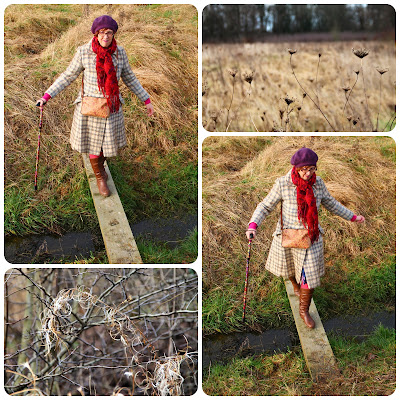 The Koude Beek (transl. Cold Brook) runs through the area and when I saw a man walking his dog cross the brook by way of this rather primitive bridge, I was adamant to follow his example.
At that exact moment the sun, tired of her game of tag with the clouds, decided to honour the occasion by spotlighting my clumsy attempts at keeping my balance. 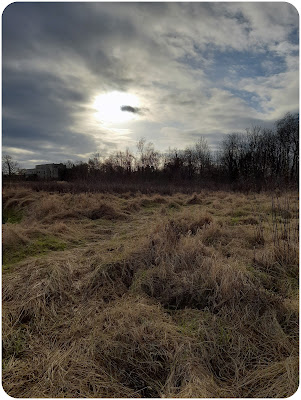 The weather gods kept taunting us and after a couple of attempts at clearing up the sun gave up altogether, transforming the landscape into a bleak midwinter one.
We wandered at will, getting the feel of the area, and vowing to return to see the changes forged by the seasons. 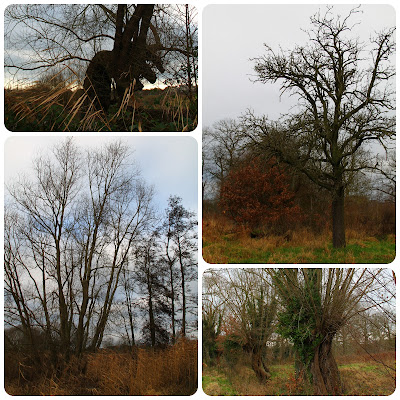 The dying sunshine threw eerie shadows making the pollarded willows look like unearthly creatures and the leafless trees mighty giants reaching for the sky.
We'll have to return too to walk across the boardwalk which bridges the marshland, but it was getting later and darkness would soon descend on the final day of the year. 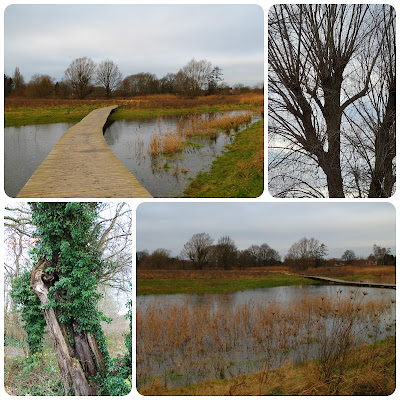 We spent New Year's Eve just like any other Saturday night and didn't even toast the new year as we'd forgotten to buy bubbles. We just stayed up until the midnight fireworks had run their course, making sure that Bess didn't take fright. In the end, she didn't even prick up her ears, taking it all in her stride.
I'll be back with our New Year's Day shenanigans in a couple of days. Until then, do stay safe my friends and don't let the virus catch you unawares!
Posted by Polyester Princess at 18:54