As I'm writing this post, both our September holiday and my birthday, which fell on its final day, are making their descent into the mists of time.

Trawling through the myriad of photographs and trying to decipher my diary entries hastily scribbled down at the end of each day has been a joy in more ways than one. As usual, my series of travelogue posts have been keeping the memories alive, while at the same time alleviating the serious case of post-holiday blues I've been plagued with ever since we came back. 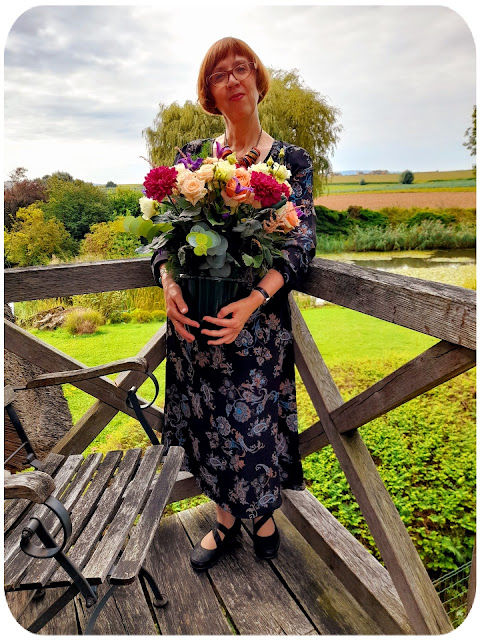 So, it's with a bit of a heavy heart and a more than my usual amount of procrastination that I'm finally settling down to the task at hand, and tell you about Sunday, the 12th of September.
There was a distinct lack of sunshine when we opened our curtains that morning, the sky a dull and solid grey, which the sun would try in vain to break through all day.
The gorgeous bouquet I'm holding in this photo was an early birthday present from my lovely bosses, Victor and José who, cunningly employing the assistance of my equally lovely ex-colleague Kris, had tracked down my holiday address and ordered its delivery from Miami. 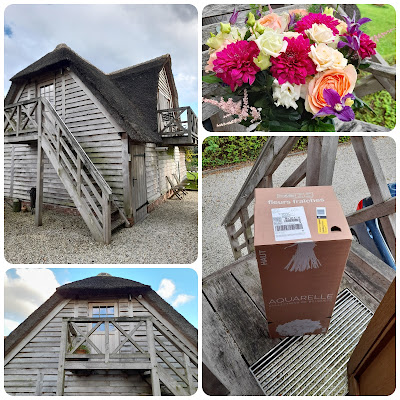 It was when we briefly came back to the cottage for lunch in between the day's activities on Saturday that owner Marino rang the bell and deposited a mysterious carton box with my name on it on our doorstep. At first we were mystified as to who the flowers were from, but then all was made clear when we spotted a card taped inside the box revealing the senders' identity. I confess to having shed a tiny tear or two. Haven't I got the most wonderful bosses? 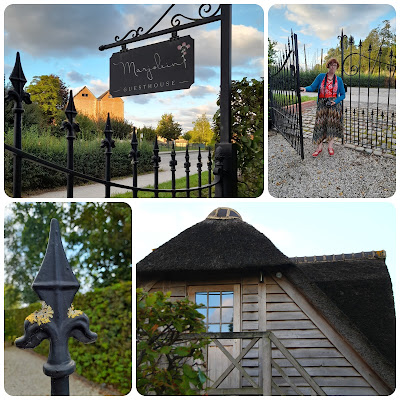 But back to Sunday! We'd booked lunch at a restaurant about 12 kilometers from the cottage, so we had a leisurely morning of lounging around until it was time to leave.
With all that time to spare, why don't I show you around the cottage? As I already mentioned, our little home away from home is an all-in-one first floor studio apartment in a delightful oak-framed and  thatched cottage, situated above the owner's car port. In spite of backing on to the owner's property, it feels completely private. The cottage even has its own monumental wrought iron entrance gate! 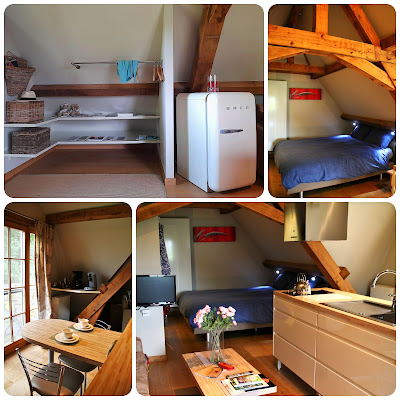 The studio is very spacious, and has a dressing area, sitting area, kitchen block and breakfast nook, with a comfortable and cozy bed and separate small but perfectly formed bathroom at its far end.
The view from the breakfast nook and adjacent balcony is of course unsurpassable, but I'm sure you already know that. 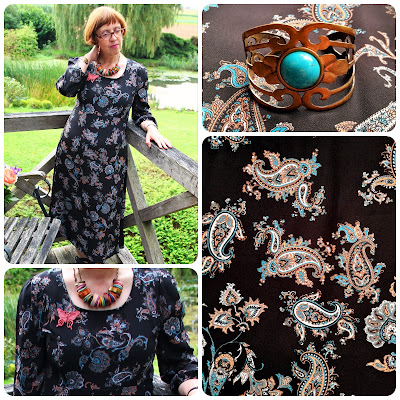 I'd packed this festive almost but not quite maxi dress especially with my birthday lunch in mind. Originally from a high street shop, it was charity shopped a couple of years ago. I've heard this length called midaxi, a term which like most new fashion trend words gives me the heebie jeebies. Well, if needs must: on vertically challenged yours truly, most midi length dresses can be considered midaxi!
I kept my accessories simple, choosing my faithful old wooden discs necklace from Accessorize, and a modern plastic butterfly brooch from my travelling jewellery capsule. I also thought it was the perfect opportunity to wear the copper and turquoise cuff I picked up at the local charity shop earlier that week.
I did think of Sheila when I spotted it! 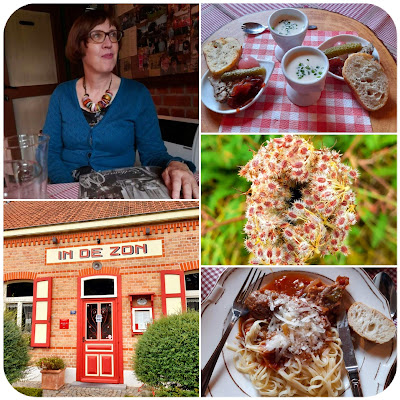 Our choice of restaurant was a posh-ish establishment called In De Zon, in a place called De Klijte in the foothills of the hilly countryside south of Poperinge. It probably doesn't take a linguistic genius to surmise that the restaurant's name translates as in the sun, and it would be about the only sunshine we'd see that day!
We had a free appetizer of cold cauliflower soup and scrumptious paté on toast. For our main meal, Jos had rack of lamb, while I went for a most delicious Osso Bucco.
Then we briefly returned to the cottage and lounged around until the clock struck 2, and we were ready for the day's next installment. 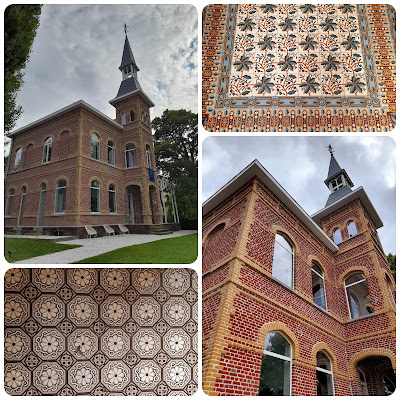 The second Sunday of September is Open Monuments Day in Belgium - I since learned from Beate that there's an equivalent in Germany on the same day! - offering the opportunity to visit historic buildings which aren't usually open to the public. As I knew we'd be in Poperinge that day, I'd perused the event's website and secured a visit to a local landmark many weeks ago.
The place we visited was a private property, a newly renovated villa built in 1900, previously known as Chalet Schabaillie, a mansion whose romantic tower gives it the appearance of a castle. 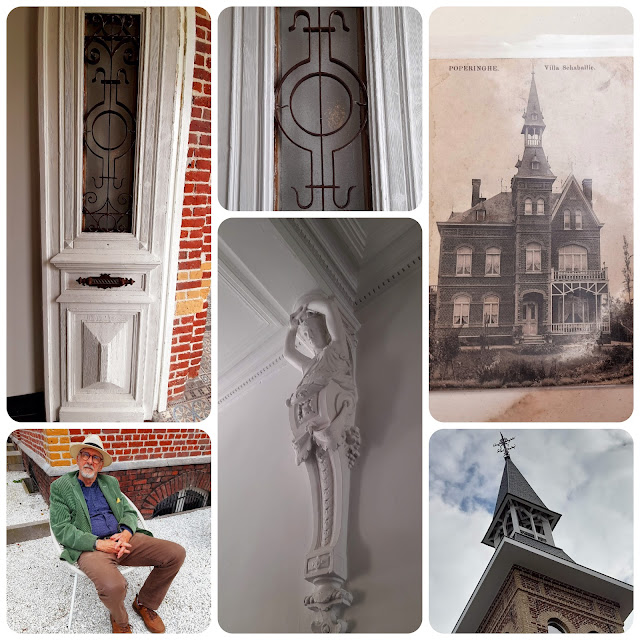 The house was named after its original owner, brickmaker A. Schabaillie. During the First World War, he was suspected by the British of espionage: they thought he was passing messages to the enemy at night! But it was just the moonlight reflecting in the tower windows of his little castle.
We were taken on a tour by its current owner, a young architect who, against all odds, trials and tribulations, managed to restore the villa to its former glory.
So, that was the final day of our holiday wrapped up. And although we said goodbye with heavy hearts on Monday, those same hearts were making little leaps of joy at the thought of seeing our little rascal, Bess, again! 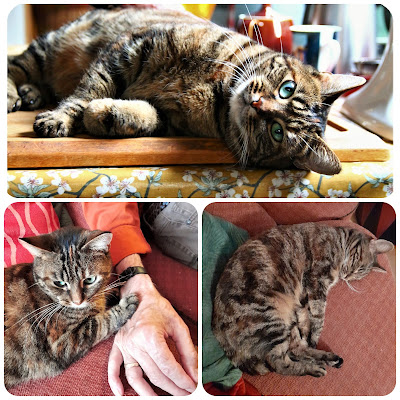 Apparently, she'd done really well during our absence, making friends with catsitters Inneke and Maurice, who'd kept us informed with daily WhatsApp messages complete with photos!
Still, she seemed pleased to have us back and hardly let us out of her sight for the first couple of days. I was glad I'd taken Tuesday and Wednesday off as well, so that we could both give her the attention she deserved. 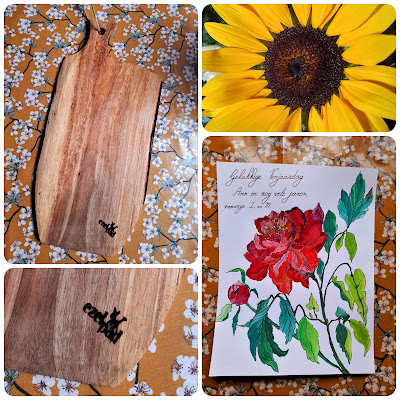 Inneke and Maurice also left me birthday presents! Apart from a pot of small Sunflowers and a gorgeous card, handmade and painted by Maurice, there was a gorgeous wooden board. This was handmade as well, by the husband of Inneke's cousin who are serendipitously running a donkey farm together in Poperinge, called Het Ezelspad. 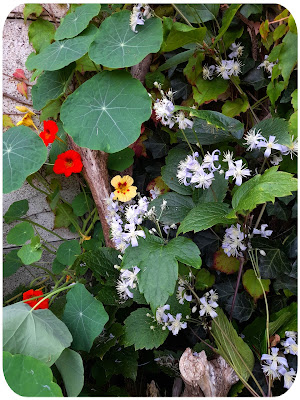 Then it was time to quench the thirst of our long-suffering patio plants and hanging baskets, as the poor things had to contend with a minor heatwave while we were away. I'd given everything a thorough soaking before we left and grouped together as many pots as possible in the shady passageway next to the kitchen. Nevertheless, there were one or two casualties, while the hanging baskets were now definitely looking well past their best.
The Nasturtiums seemed to be in their element, though, taking advantage of the state of neglect to further colonize the garden. Here, they were looking quite pretty scrambling through the now fully flowering herbaceous Clematis 'Mrs. Robert Brydon'. 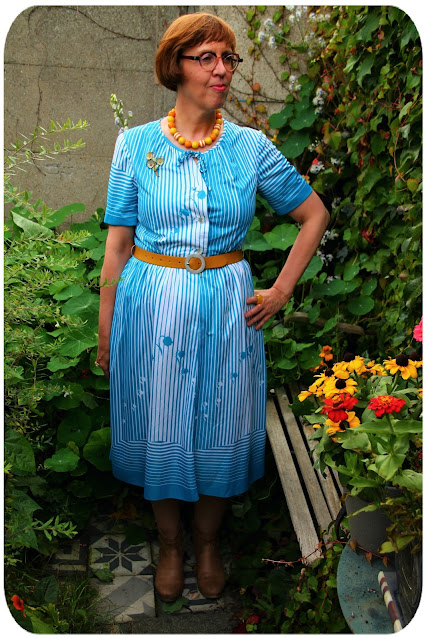 Tuesday was spent unpacking, doing a first wash load, and spending time with Bess, obviously.
While rummaging in the linen chest, where my out of season clothes are stored, I was surprised to find this vintage Summer dress, which hadn't even made it into my wardrobe yet. As time for my Summer wardrobe was ticking, I took the opportunity to wear it on this glorious late Summer's day, on which the mercury effortlessly climbed towards the mid-twenties. 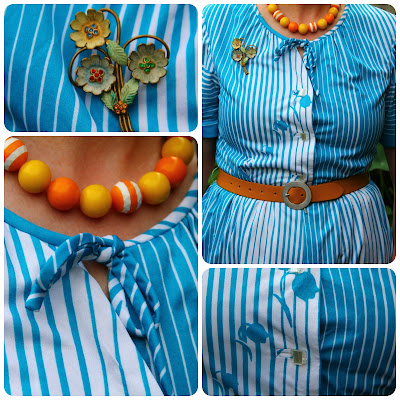 As usual, when I'm wearing this dress, with its crêpe-like, lined material, cute square buttons and tiny bow at the neckline, I'm wondering why I'm not wearing it more often. No, don't answer that. There are simply not enough days in a season for wearing its entire designated wardrobe! 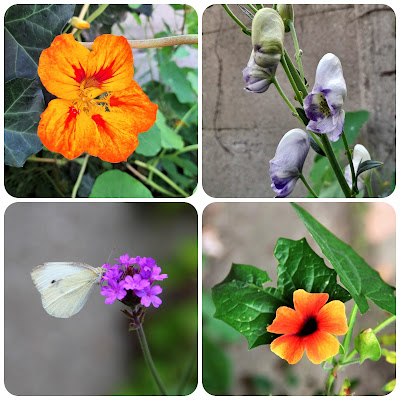 Time for another garden inspection. Apart from the old stalwarts still blooming their heads off, I was delighted to see that our Monkshood (Aconitum carmichaelii 'Cloudy') had finally deemed to open its first flowers (top right). 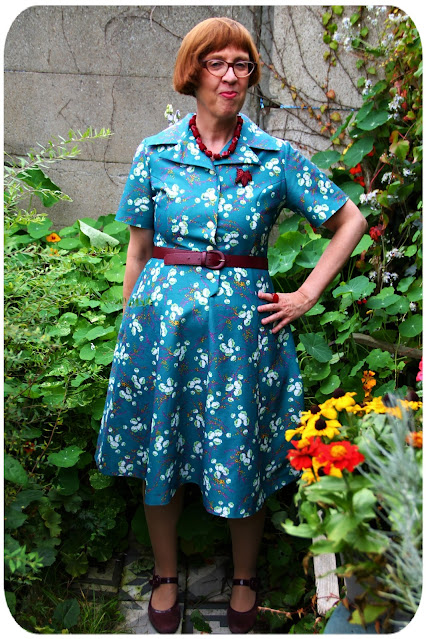 Another day, another outfit! This was what I wore on the final day of my time away from work.
The sun was again conspicuous in her absence, and although the temperature was still quite reasonable, I decided to give one of my good old Diolen Delights an outing. One of my favourites at that, in jade green sprinkled with white, light green, yellow and pink flowers. 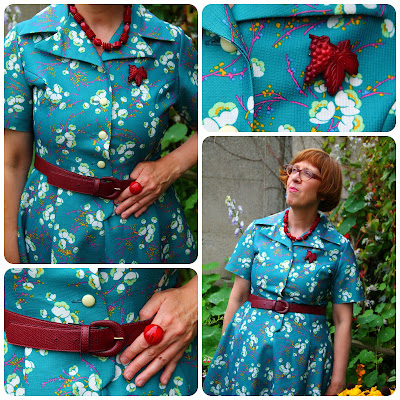 Instead of pink, my usual go-to colour for its accessories, I opted for dark red and burgundy, which I think offered the perfect contrast.
It was back to work on Thursday, but I'm skipping both Thursday and Friday here. After all, apart from catching up at work and finding my way again among the chaos created while I was gone, there's nothing exciting to tell. 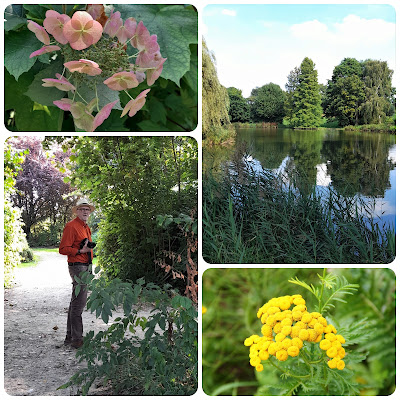 The same goes for Saturday, when we just mooched around until we hit upon the idea of going to the charity shop near the park in Duffel. In pre-Covid times, visiting both the shop and the park had been one of our regular Saturday outings. Until now, we'd steered clear of charity shopping on a Saturday in a bid to avoid the crowds. However, going on holiday had given us a taste of something verging on the old normality, and about time too, so off we went. 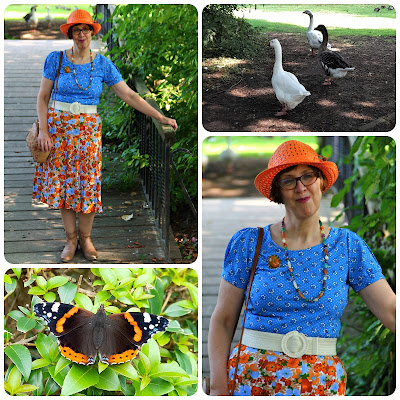 The sun had come out of hiding by then, and with the temperature again climbing well into the twenties, I wore a skirt and top combo, both vintage pieces, from Think Twice and the charity shops respectively. The cream woven belt is a recent addition and a cheeky retail buy at that.
For our walk, I grabbed the orange hat, bought as an emergency at the seaside, from the car. 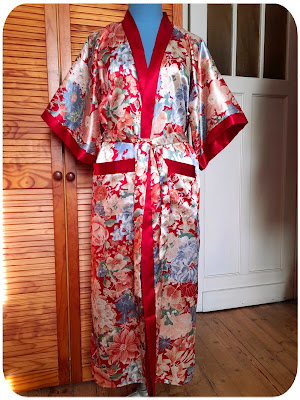 As for our visit to the charity shops, we needn't have worried, as it was quieter than we'd known it to be on a weekday. On the downside, finds were far from plentiful, but I was still happy to come across this silky floral dressing gown!
That's it for now. I hope you'll join me again for another catch-up in my next post.

Posted by Polyester Princess at 19:05