In the Summertime, when the weather is hot

The weather has made a complete U-turn at the time of writing, back to April-ish tempestuousness and lukewarm temperatures, complete with showers and the odd warm and humid day mixed in to throw us off guard.

But all that was still in the future on Tuesday the 15th of June. After a scorcher of a Monday, when the mercury gleefully climbed to 29°C, the office's aircon offering some welcome coolness, we'd woken up to a moody, overcast day. 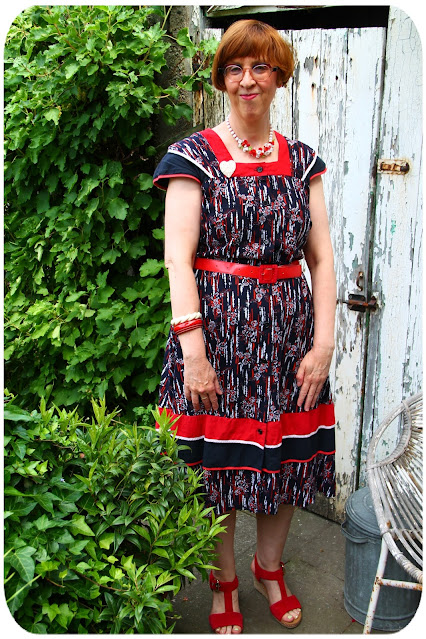 The clouds did not prevent the temperature in making its ascent towards the mid-twenties and the accompanying humidity made me reach for one of my cotton frocks. This delightful 1950s navy blue, red and white cap-sleeved frock was yet another Think Twice sales bargain, snaffled at the same time as last post's curtain couture skirt in June 2019. 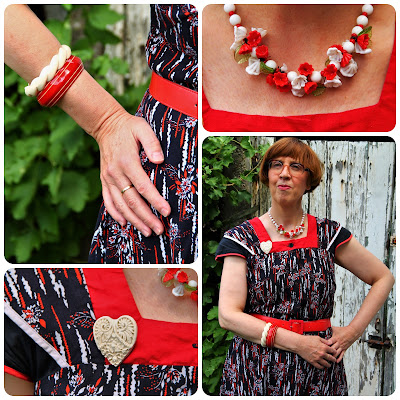 My flower necklace is vintage Murano glass and was a flea market find back in the mists of time, while the ceramic heart brooch was picked up in a craft shop in Cardigan during a memorable and particularly wet holiday in June 2017.
The red vinyl belt with its rectangular buckle, as well as the bangles, in Bakelite and wood respectively, were charity shopped. 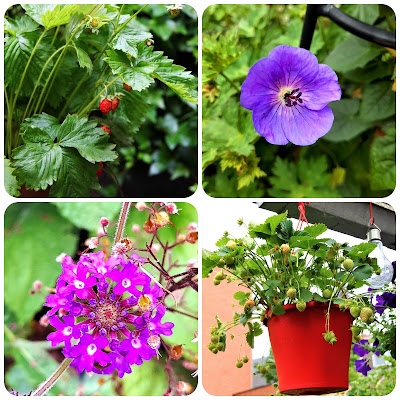 In spite of having stocked up on insect repellent in order to avoid sustaining more itchy bites, we weren't really in the mood for a walk that day.

Instead I treated the garden to some TLC, involving a thorough deadheading and cutting back session.

I was delighted to see that the first of the deep blue flowers had opened in Geranium 'Rozanne' (top right), while our Verbena rigida - a compact variety lacking Verbena bonariensis's lofty heights - had managed to worm its way through the jungle of plants (bottom left).

There were the first of the wild strawberries to feast on, while the repeat fruiting variety in the hanging bucket we acquired last year was simply dripping with berries, still green at the time, but slowly but surely starting to ripen. 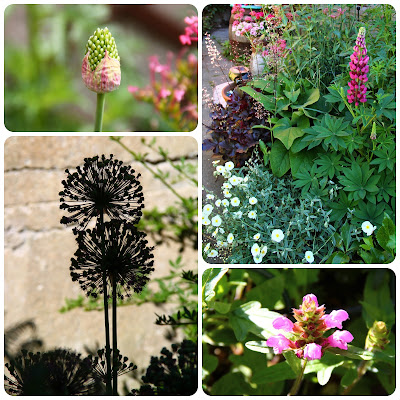 Seed-heads were all that remained of Allium 'Purple Sensation' (bottom left), but Allium sphaerocephalon, better known as Drumstick Allium (top right), is following closely in its tracks, springing up all over the garden, some of them ready to shed their skins. 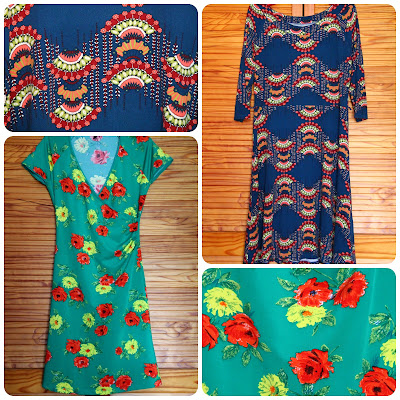 The sun only managed to get a look in by mid-afternoon. Raring to escape Dove Cottage's confines, we drove down to the Oxfam shop in the nearby town of Wilrijk for a rummage.

The clothing aisles were a bit uninspiring, but I still managed to find not one but two King Louie dresses, a short-sleeved one infused with red and yellow Summer flowers in their best-selling faux-wrap style, and a long-sleeved royal blue one with an Art Deco style print. 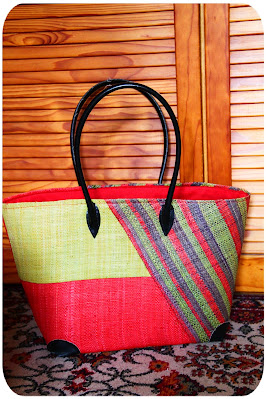 This woven sisal tote bag was winking at me from across the shop, so it was almost a given that it came home with me. Not that I haven't got enough of these bags already, but I'm sure I'll find a use for it. 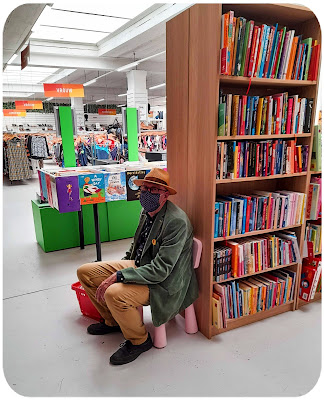 By then, the eternal mask wearing had made Jos feel a bit dizzy so, never minding its diminutive size, he plonked himself down on a conveniently placed chair while I did a quick perusal of the bookshelves. 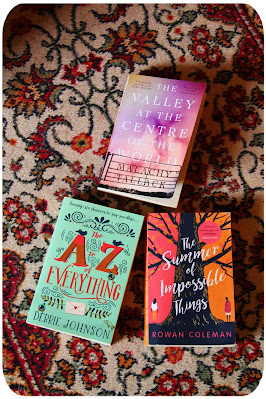 These three made it into my basket. I'm currently reading The Valley at the Centre of the World by Malachy Tallack. In a nutshell, it deals with the emotional journey of a man who returns home to remote Shetland and the viewpoints of the people who live there. I'm only about halfway in, so I'm not sure yet if it's a keeper. 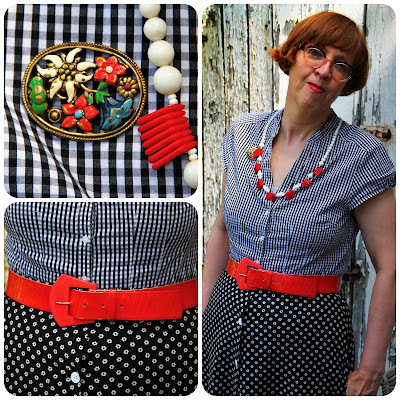 We're skipping Wednesday's office day, which was another sweltering one at 30°C and with full-on sunshine all day. Needless to say, the aircon had to work overtime to keep brain melt at bay and concentration levels up.

This was followed by a suffocatingly hot and sweaty night. We'd exchanged the Summer weight duvet for an empty duvet cover used as a sheet. This resulted in the odd ouchy moment whenever Bess did her usual tail-chasing across the bed. In spite of all this, I did sleep OK-ish, but unfortunately Jos did not. He had to get up really early again to take the car to the garage to have its windscreen replaced. If this sounds familiar, please don't worry: I'm not suffering from memory-loss and repeating myself. The first attempt of a couple of weeks ago came to nothing as the replacement windscreen hadn't been delivered to the garage. 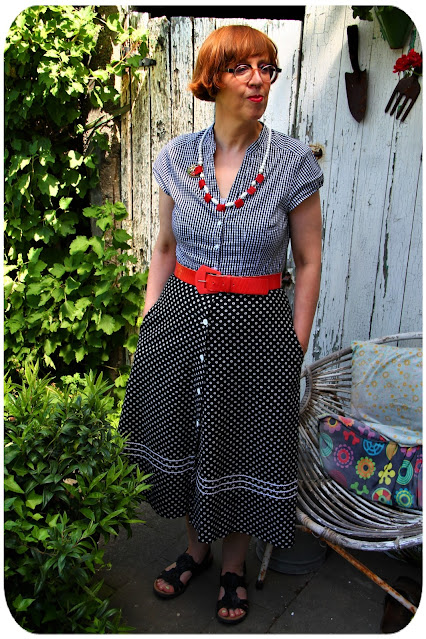 With another day of +30°C ahead of us, I dressed in cool cottons again, this time combining a vintage skirt with a charity shopped H&M skirt in a pattern mix of polka dots and gingham.

Pops of red were added with my accessories: a charity shopped red vinyl belt and a vintage necklace and brooch, both of which were flea market finds.

My feet were happy in my most comfortable sandals, a pair of Clarks bought in the sales during our 2018 UK holiday. 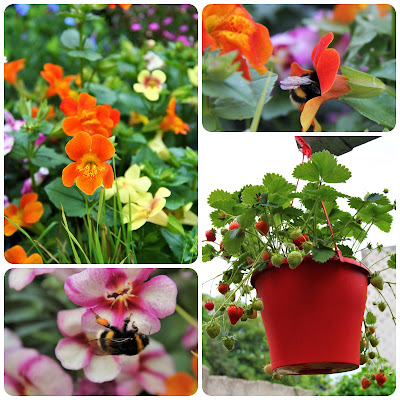 Bees are buzzing in our garden, relishing the variety of flowers on offer. Judging from the amount of pollen collected on its hind legs, the bumblebee on the bottom left seemed to be ready to fly home and deliver its precious cargo.

And look at those strawberries! This is what happened in just two days time! 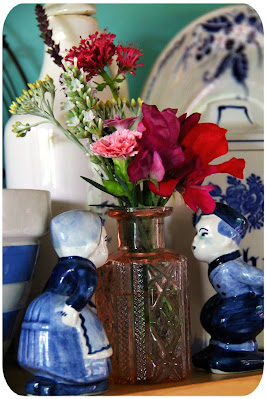 With the heat trapped between our garden walls, the only times we venture out there on hot days is in the early morning or late at night.

That morning, I picked a posy of Sweat Peas, Dianthus, Red Valerian and curry plant (Helichrysum italicum) for the kissing Dutch boy and girl on our kitchen shelves to enjoy! 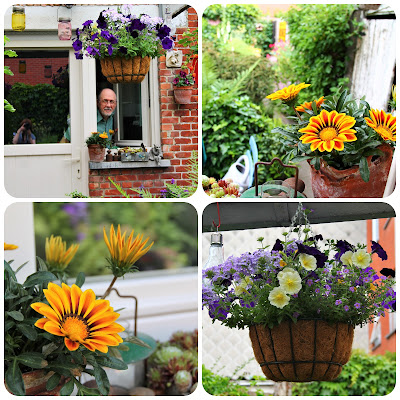 Watering time is between 8.30 and 9 pm, when the heat of the sun has become bearable. We've got the watering process down to a tee, with Jos pumping up well water by way of the hand-pump in our bathroom, and me making several journeys into the garden with the watering can.

The hanging basket with its cream, lilac and purple colour scheme is a huge success and as long as the sun is shining, the Gazanias on the kitchen window sill are showing their fiery yellow, orange and brown faces, which remain stubbornly closed on cloudy days. 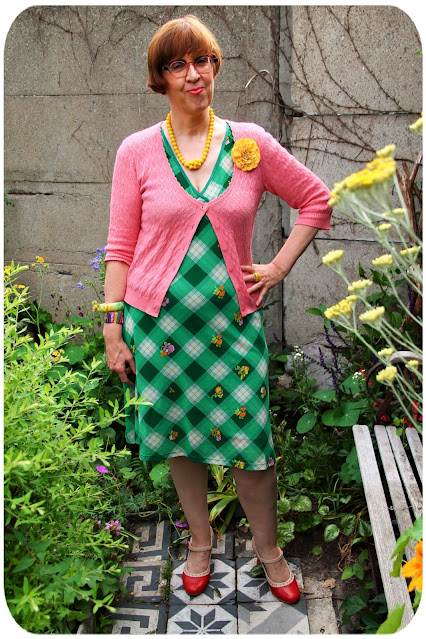 Apparently, it rained heavily overnight. Not that I noticed, as I slept like a log right through it.

The rain had brought some initial and relative coolness but once more we were in for a very hot day on Friday, with highs of 30°C. Work was quite hectic, but thankfully the office's aircon kept me going and helped me get through my workload.

Then, finally, on Saturday the day went off with a cloudy start and temperatures nose-dived to the low twenties. I even had to wear a lightweight cardigan on top of the King Louie dress I'd picked out that morning. 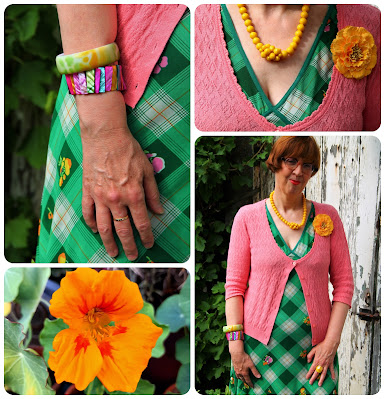 A charity shop find back in October, I was drawn to the dress's green based checks dotted with yellow, pink and orange flowers. At the time, I mentioned I would probably have forgotten all about by Summer, which indeed I had until I came across it again when rummaging through a bag of what Sheila would call "jammy dresses".

Apart from the sugar pink cardigan to which I pinned a yellow flower corsage, I accessorized the dress with a yellow beaded necklace from a long gone vintage shop and a bangle and bracelet which were both charity shop finds.  On my feet, a pair of orange and cream slingbacks which have been in my wardrobe forever.

We were greeted by the cheerful face of the first of undoubtedly many Nasturtium flowers when we stepped into the garden. Apart from those I sowed back in April, more and more self-seeded ones from last year's climbing variety keep popping up all over the place. In order to keep them from once more engulfing that part of the garden, I had no choice but to pull up some of the seedlings. 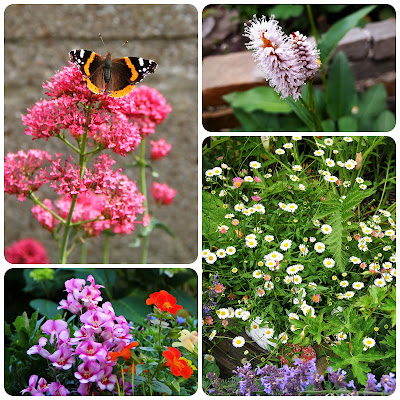 This Red Admiral butterfly was kind enough to pose for me while breakfasting on our Red Valerian, which is flowering almost as exuberantly as Erigeron 'karvinskianus'  (Mexican fleabane, bottom right).
Meanwhile, the Persicaria bistorta we planted next to the log path has produced one or two fluffy flower spikes, which seem to be another magnet for the resident population of bees.
More rain, accompanied by a thunderstorm, was forecasted for later that day, leaving the garden saturated and bedraggled on Sunday, and sorely in need of a helping hand.  But that will be for another post! 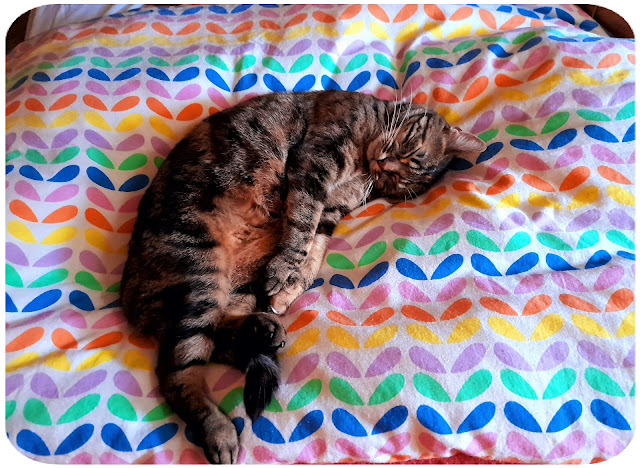 In the meantime, guess who hasn't got a care in the world?

Bess says to stay safe, sane and, of course, fabulous, wherever you are!