Reasons to be cheerful

I've got every reason to be cheerful these days. The sun has been gracing us with her presence, for starters. Then, last Friday, I finally got my first Pfizer vaccine jab, leaving me with no nasty side effects apart from a slightly sore arm on Saturday. And last but not least, as if to put the icing on the cake, I became a step-nana courtesy of Jos's son, whose partner gave birth to a beautiful baby boy called Cas  on Saturday! Who said life couldn't be sweet, even in these uncertain times! 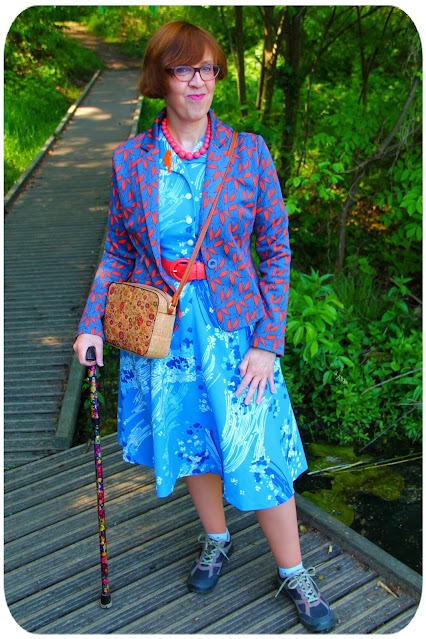 But while the two last events were still almost a week's worth of days away on Sunday before last, we had already been enjoying a handful of gorgeously sunny days by then.

Fully aware of the weather's fickleness, we wanted to make the most of the balmy temperatures by going for a walk before the weather gods would change their minds.

Going for a hike, however, is no excuse for not getting dressed up, the only concessions I'm making being in my footwear - I opted for a comfortable pair of lightweight walking shoes - and my trusty walking stick. The latter does make all the difference, offering the necessary support for my rickety knees and back. 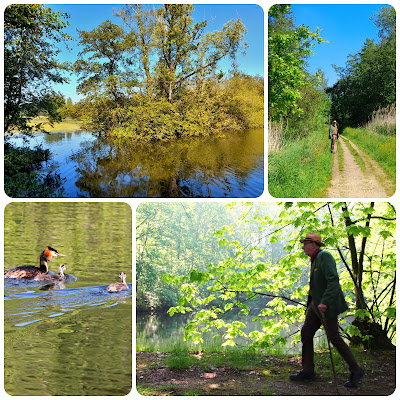 Our destination of choice was once again Blaasveldbroek, the magical nature reserve which some of you have accompanied me to quite a few times before.

With its 675 hectares and myriad of paths to choose from, we were practically assured of some solitude, even if more people seemed to be out and about than usual. And who could blame them, really, after those wet and miserable couple of weeks? There's more than enough room for social distancing and, apart from the odd group who, mind-boggling as it is, still seemed to struggle with the concept, people were generally courteous and well-behaved. 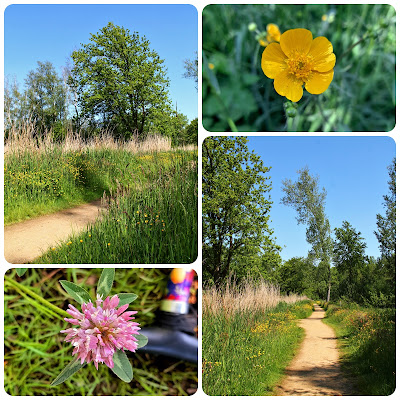 Mere minutes after we started out, we veered left towards the jetty I'm standing at the end of in the opening photo. This is a quiet and enchanting place to stop and stare for a minute or two.

A fancy duck glided by, two playful ducklings in tow, when all of a sudden the stillness was shattered by squabbling and squawking when the family unit came across a rival hiding in the undergrowth.

Continuing on our way, we soon approached a T-junction, where we turned left again, the path snaking between lush summer meadows and reed bordered ponds. A chorus of frogs erupted in song when we passed, their ear-shattering whirring and croaking drowning out the far-away calls of a cuckoo. 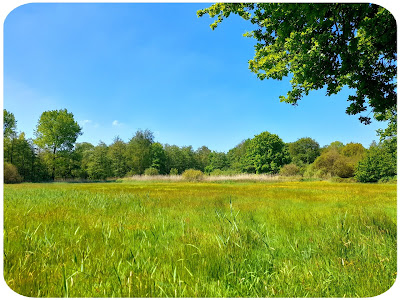 Even if the majority of this watery wonderland is barely above sea level, I don't think we have ever seen it this waterlogged, except perhaps one Winter many years ago, when this meadow had turned into a shallow lake. Don't be fooled by its current appearance, though, as the grassland and its abundance of wildflowers are up to their ankles in floodwater. 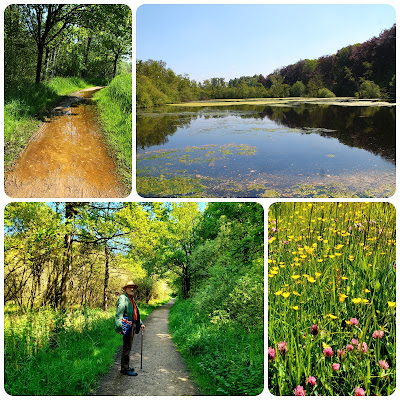 Parts of the network of paths had been flooded too, so that we had to alternately wade through the resulting puddles or try to skirt them by way of the grassy verges, with treacherous brambles often lying in wait.

We enjoyed a picnic sitting on a bench overlooking one of the main lakes, then continued along a path which lead us through other-worldly half-submerged woodland. 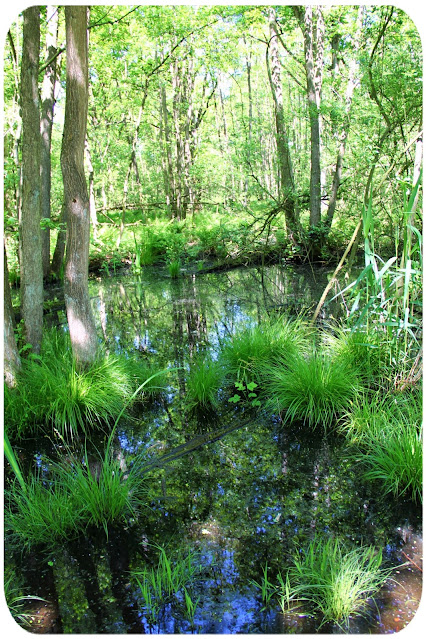 The path we took eventually passes a large, tree-bordered meadow where we usually stop for outfit photos. Here, the grassland was waterlogged too, which rather limited our options.

Still, we found a dry-ish area, where I could prance around in my Diolen frock of choice, with the high grasses tickling my legs. I should have known better, as in spite of wearing tights, one or two hungry insects which preferred to remain incognito, had a field day on my left leg. 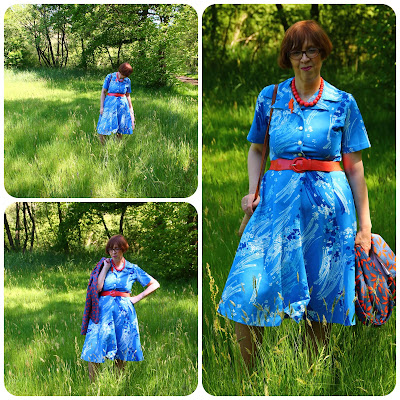 I love how the impressionist print of my dress, and in particular the white brush strokes, seems to echo the meadow grasses.

Orange is my default colour to wear with this dress, and if my memory does not fail me both the orange belt and the blue blazer with its pattern of orange leaves have accompanied it here on the blog at least once before. 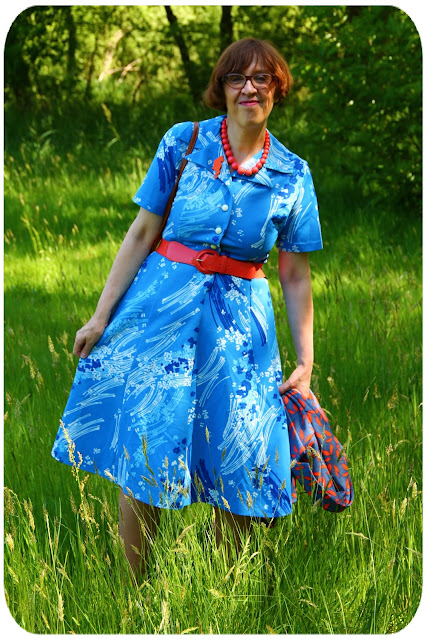 Perhaps I was even wearing the same orange beaded necklace? The orange cat brooch is a recent purchase, so at least that one is a first. 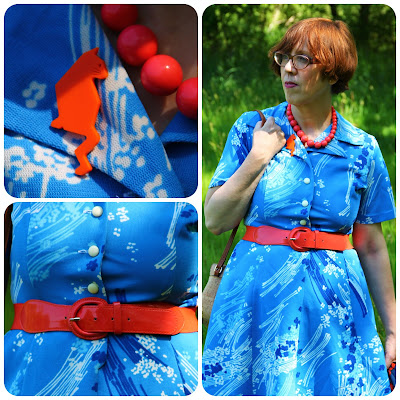 Back at home, we delighted in the variety of blooms in the garden. The warmth of the sun on top of all that life-giving rain had caused quite a growing and blooming spurt!

Clockwise from top left are the first of the pastel coloured Sweet Peas, which have joined Aquilegia 'Crimson Star', Trollius 'Lemon Queen' and Aquilegia alpina. 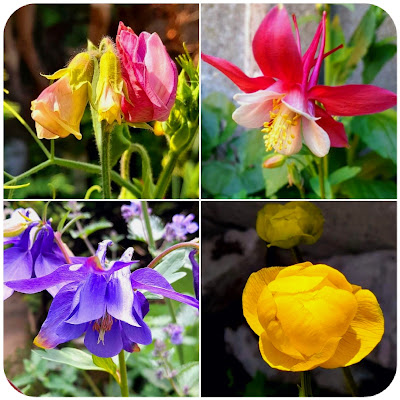 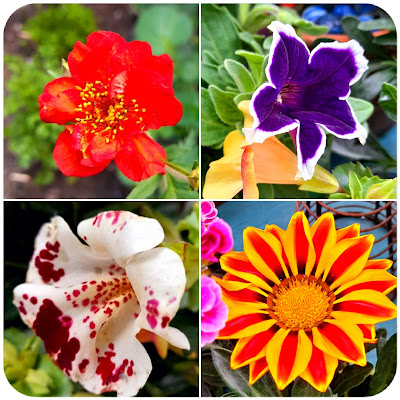 Yet another reason to be cheerful followed on Monday.

A quiet office day courtesy of Memorial Day in the US, the continuing sunny weather lured me outside during my lunch break. A spring in my step carried me to my favourite Think Twice shop, which I used to visit on a weekly basis before Covid threw a spanner in the works.

I hadn't been there since September, and my 10 minute walk there from the office felt strange and familiar in equal measure. 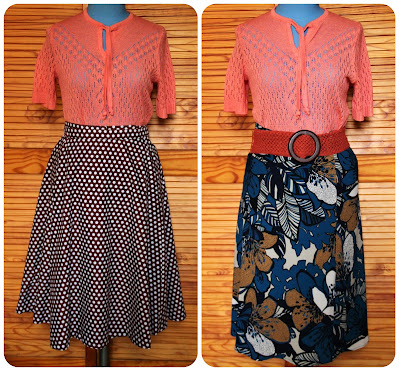 As the shop had reached its full capacity, I had to wait outside for a couple of minutes. No surprise there, as they were in the middle of one of their famous sales. That day, everything was going for € 5.

Feeling like a child in a toy shop, I browsed the aisles, finding several things that tickled my fancy.

My catch of the day included a 1970s chocolate brown polka dot wrap skirt and a blue, russet and white exotically patterned skirt in a lined, viscose-like fabric, which I suspect is somebody's handiwork. 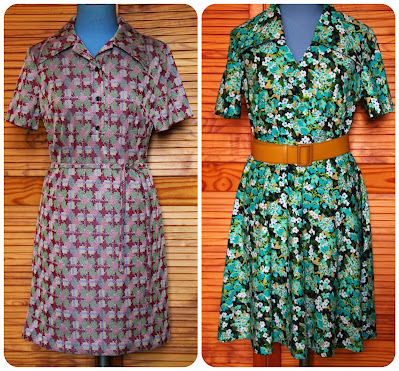 From the full to bursting rail of dresses, I selected a Crimplene multi-coloured jigsaw print one and a delightful floral cotton frock in delicious shades of green and blue. The latter's crisp fabric and label, proudly proclaiming its Austrian origins, leads me suspect it has never been worn. 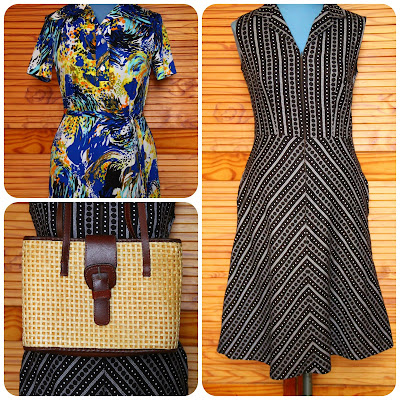 Judging from the stiffness of its 100% cotton fabric and pristine label, the same can be said for the brown and grey sleeveless dress. On top of its dotty stripes, sewn into a chevron pattern in the skirt, it zips down the front and, best of all, boasts two inseam pockets as a bonus.
The tunic/blouse with its riotous yellow, blue and cream pattern, was the only top which made the grade.
Last but not least, I fell hard for this wicker and faux-leather shoulder bag, which I'm planning to us as my working bag this Summer. 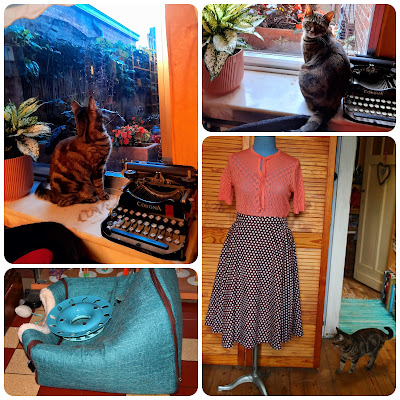 A final reason to be cheerful, and one which has been a constant for three months now, is the presence of Bess in our lives.

She loves sitting on the dining room window sill, from where she can keep an eye on what's going on in the passageway. Jos found her making friends with a grey neighbourhood tabby sitting on the adjacent kitchen window ledge the other day, We had to rescue the houseplant sitting to her left, as she started digging its soil, and she even managed to "type" on my grandfather's Corona typewriter sitting to her right!

Just like Phoebe, she loves helping (bottom right) but unlike Phoebe she can be quite rowdy. One morning we woke up to this (bottom left). Apparently, she'd made another dent in Snooze Bay, turned it sideways and dumped an interactive cat toy topsy-turvy on top of it!

And on that cheerful note, we've come to the end of my post. Hope to see you again next time. Do stay safe, sane and sensational until then, my friends!

Posted by Polyester Princess at 19:07