Hello June, first of the Summer months! Traditionally our holiday month, it always set our hearts aflutter whenever we turned the calendar's page. As obviously we will once again be unable to go on our usual UK holiday, there is a tinge of heartache instead.

The good news is that the company we are renting our holiday cottage from - Sykes Cottages, which I'm linking as they've been most obliging -  in agreement with the cottage's owner, have consented to switching our two-week holiday, which was originally meant to happen in 2020, to next year. The owner has jokingly mentioned he's expecting a big box of Belgian chocolates, though!

In other news, my boss has decided that we'll continue working 3 days a week until the end of the month, which I can't say I mind very much. Au contraire! And oh, yes, before I forget: by this time tomorrow, I'll have received my first dose of Pfizer vaccine. Who'd have thought that getting a jab would be the cause of so much excitement? Perhaps it won't be such a bad June after all. 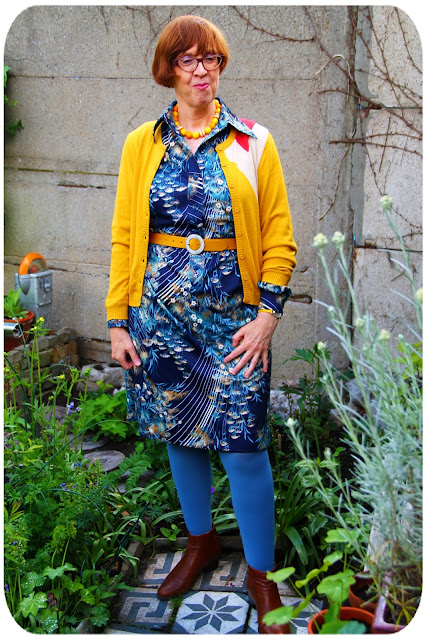 I'm sure it won't come as a surprise that my blog hasn't reached the month of June yet. Always lagging behind real life, I still need to tell you about the last week of May.

So, without further ado, let's start with Tuesday the 25th of May, which was my first non-office day of that week. Any plans for spending time in the garden had to be shelved when we could hear the rain battering down the minute we opened our eyes.

At barely 13°C, I dejectedly rescued one of my long-sleeved frocks from the pile I'd put aside for hibernation in the linen chest. 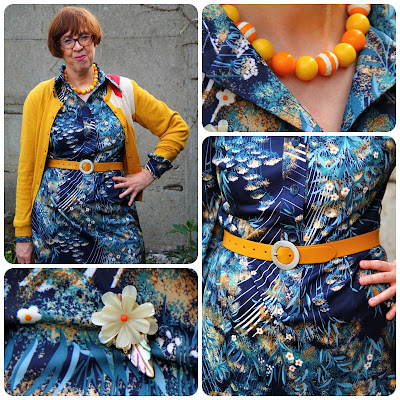 Part of my Think Twice birthday haul back in September, this navy, flower infused dress came with a tie belt which, taking my lead from the pattern's daisy hearts, I replaced with a marigold yellow leather one. Then, browsing my drawers of brooches, my eyes alighted on this vintage Daisy pin, which matches the dress's daisies almost exactly.

Further accessories were my yellow, orange and white bubblegum necklace, a yellow cardi with red and white detail on one shoulder, a pair of sky blue opaques and a pair of cinnamon ankle boots. 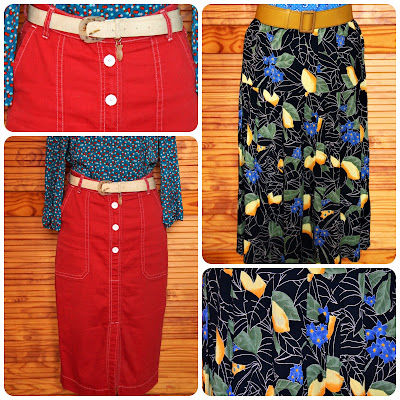 We'd originally intended to go to the garden centre to pick up some more annuals, but as the day was too much of a washout to do some actual planting, we opted to go charity shopping instead.

Browsing the clothing basement of the three-storey charity shop in Duffel, I was about to give up and go home empty-handed when I noticed a rail of newly arrived skirts. From this, I selected a brick red denim skirt from Zara and a flouncy black viscose skirt printed with lemons and forget-me-nots. The latter has already been a blessing on a warm Summer's day at the time of writing. 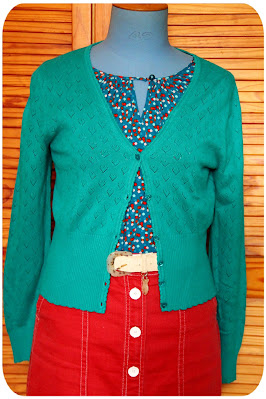 I also managed to add to my collection of heart-patterned King Louie cardigans with this bright turquoise one. I now have these wonderful cardigans in seven different colours, all of them charity shopped over the years!

When I was dressing up Angelica in my new finds, it dawned on me that I forgot to show you two items from our previous shopping trip, as they were still in the laundry basket at the time.

First up is a pair of exotically patterned palazzo trousers, which I can't wait to give an outing. The other item is a sleeveless Diolen frock in a delicious flower pattern. In fact, I already have a frock in exactly the same pattern: this 1970s does 1940s one, which is a firm favourite. I also have a butterfly sleeved dress in an alternative colourway. 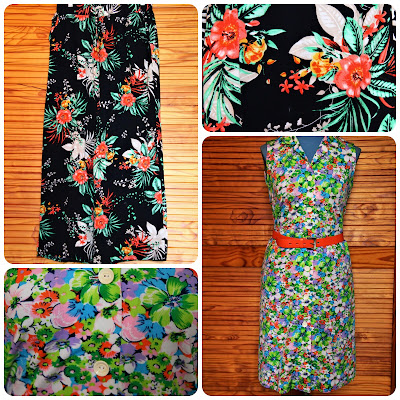 A brief reprieve from the rain at the end of the day allowed us to take outfit photos and inspect the garden's progress.

The dark maroon leaves of Heuchera 'Black Sea' and the Allium globes were saturated with raindrops but overall the garden seemed to thrive on all that heavenly moisture.

I was delighted to see the first rose-like bud appearing in the Geum chiloense 'Mrs. Bradshaw' we planted back in April (bottom left) while the size of the saucer-like magenta flowers in Geranium 'Tiny Monster' (top left) took us quite by surprise! Not so tiny after all! 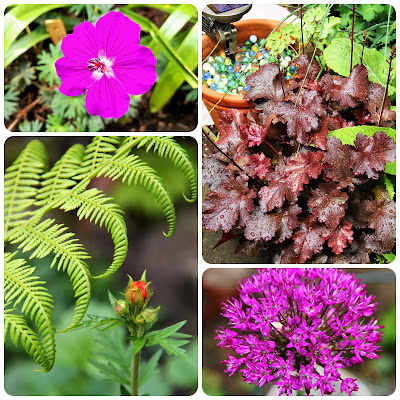 We think that the 'Tiny Monster' moniker would be far better suited to Bess! Her voyage of discovery has now lead her on top of the kitchen table, from where she is able to watch the wildlife visiting the passageway. Creepy crawlies, beware! 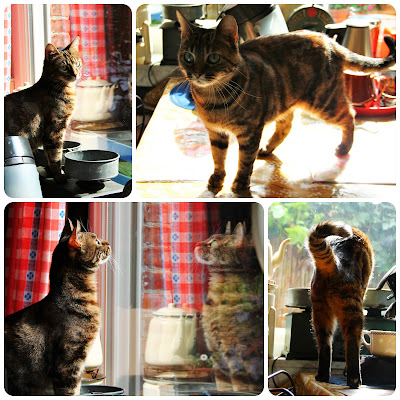 Wednesday's weather was another mixed bag of sunshine and clouds, with some showers thrown in, the temperature making a tiny jump to 15°C. Not that I noticed much of this, as my workload at the office kept me fully occupied.

We'd been looking forward to Thursday, as the weather forecast looked rather promising, only to be disappointed as those bothersome weather people got it wrong again. Mercifully, we were spared another rainy day, but it was quite blustery, and only 14°C. 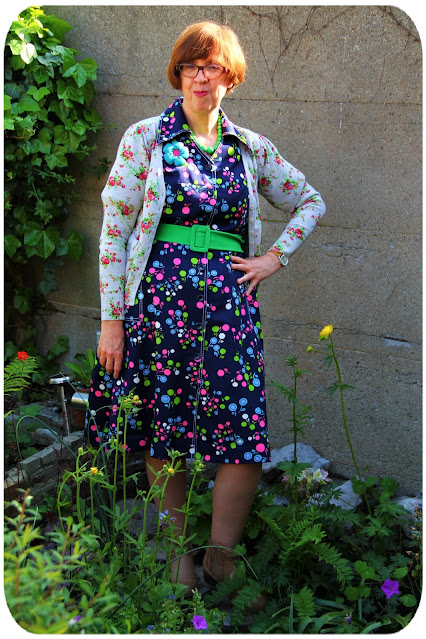 Although once quite poetically likened to balloons flying up into the evening sky, it are actually stylized flowers which constitute this short-sleeved dress's pattern. It has graced my wardrobe ever since I laid eyes on it in a charity shop in March 2017.
Again, it came with a self-fabric tie belt, which this time I replaced with a green stretchy fabric one. The latter was a charity shop find as well, sold separately although I expect it once belonged to a dress. One of my green beaded necklaces - I have them in several shades - kept the belt company. 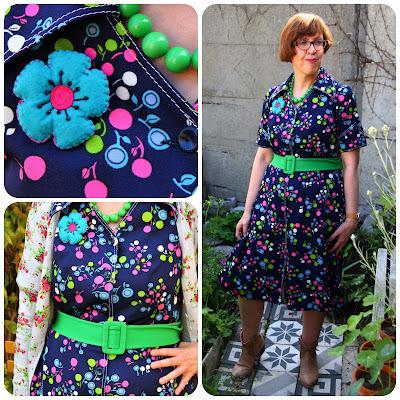 I needed a large brooch to compete with the dress's busy pattern, and found the perfect one in my box of flower corsages. This blue felted flower with its bright pink heart fit the bill - and the dress - perfectly. The flower sprinkled cardigan is another recently charity shopped King Louie one.

First outing this year for my wicker panelled oatmeal ankle boots. Once bought as an emergency replacement pair after having a footwear incident at work, I liked them so much that I bought them twice. They are perfect for those not-quite-yet-Summer days. 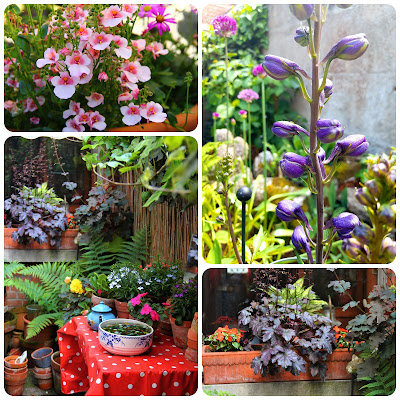 After our usual fruit & yoghurt breakfast, we made that postponed trip to the gardening centre, picking up a box of selected annuals and bedding plants. These included two pots of coral Busy Lizzies to replace the spent pansies in the window box at the end of the passageway. Watched by Bess from her scratching post, which we'd moved in front of the window, I planted these on both sides of the box's permanent resident, Heuchera 'Can Can'. 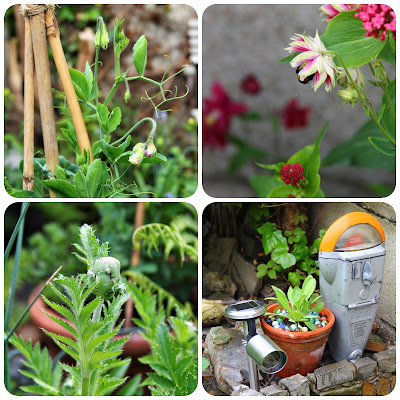 My other garden accomplishment that day was finally planting up the Gaillardia we'd bought a couple of weeks ago. Its home for the Summer is a terracotta pot which fits nicely between the solar spotlight and the parking meter above the rock garden.

Meanwhile, the garden was showing lots of promise and potential, waiting to be fulfilled once the weather warms up. While the Aquilegias are still going strong, there are the first of the Sweet Peas and five big fat flower buds in the Oriental poppy! 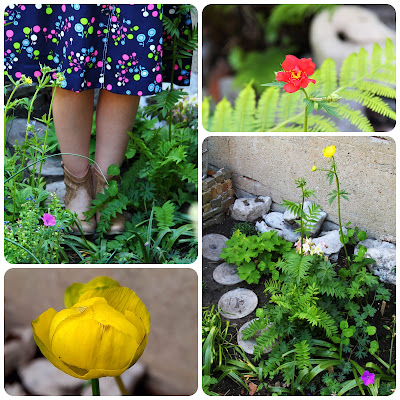 This gorgeous yellow flower has got me stumped. Does this look orange to you? Not to me either. It's Trollius 'Orange Princess'. Or at least, that's what it said on the label! Apparently, there's a Trollius 'Lemon Queen' too, so they must have got their labels mixed up at the garden centre. 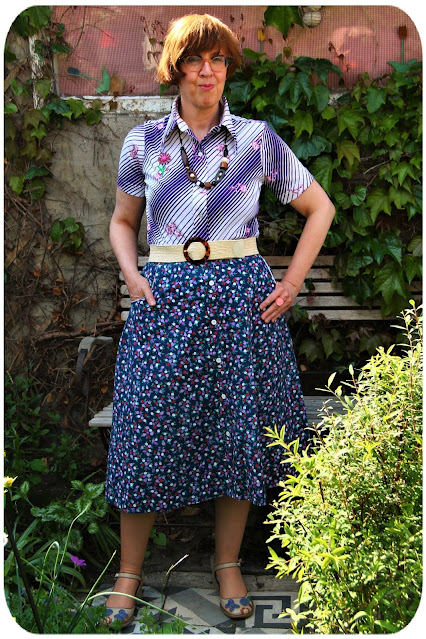 There was a considerable improvement in the weather on Friday, and by Saturday, we were able to finally enjoy a gloriously sunny day. The temperature soared to 21°C, and even the fact that the sun hid behind the clouds at regular intervals couldn't stop play.

The first of my 1970s vintage cotton skirts came out to play, joined by a vintage short-sleeved blouse. The latter's purple on white diagonals, dotted with magenta flowers, complimented the skirts's millefiori pattern. Again, my brooch collection came up trumps with the perfect flower brooch. 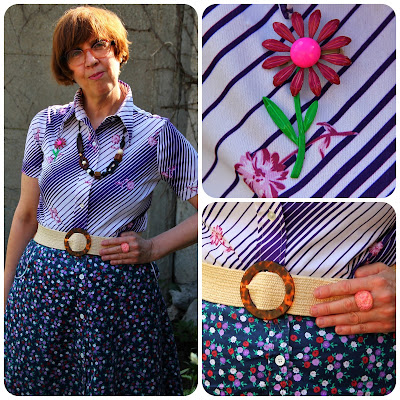 Trying on a handful of necklaces, nothing looked right until I hit upon this one, which is an old retail buy, from Accessorize. To tie in with its brown shades, I opted for a stretchy belt with a faux tortoiseshell buckle 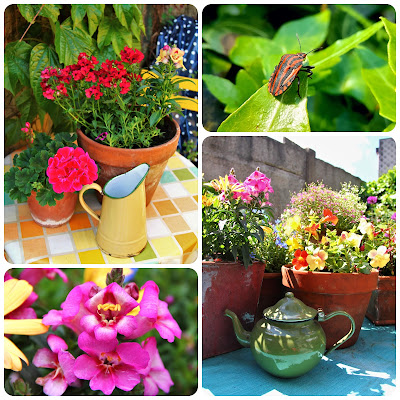 Needless to say, the better part of the day was spent in the garden.

I started by thinning out the ferns and cutting back some of the Winter Jasmine to give more space to the plants underneath, after which I planted up all the patiently waiting annuals. 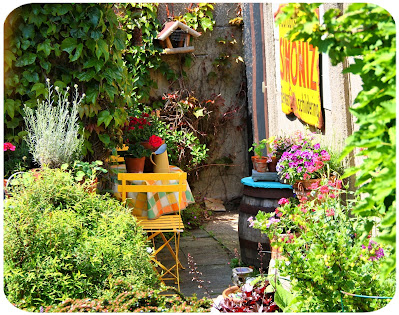 The garden is at its exuberant best now, and the best part of not travelling in June is that we can enjoy it to the full and give it the care it deserves.
I'll be back, partly vaccinated, and with more garden and other sunny weather adventures, in a couple of days' time.
Stay happy and healthy, everyone!