A maze of rainy days

It seems that the weather gods have finally answered our prayers by sending a handful of sunny days our way. And about time too! In just a matter of days, we'll turn another page on the calendar and soon Spring will be well and truly over. Whether to make up for this year's cold April and wet May we can look forward to a warm and sunny June remains to be seen, but for now, I am making the most of the sunshine to catch up with some garden chores and top up my seriously depleted vitamin D levels. 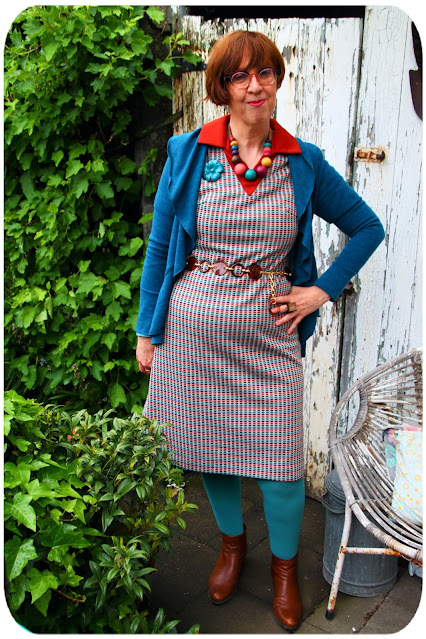 It is a bit of a wrench having to revisit that maze of rainy days for the sake of my blog, but here I am, late afternoon last Saturday, when a sudden break in the solid layer of grey clouds drove us outside for a couple of hasty outfit photos.
I am wearing a short-sleeved dress picked up from Think Twice last September - incredibly, one of only a handful of garments bought from my favourite chain of vintage shops in well over a year. Underneath, I am wearing a teal long-sleeved T-shirt in almost exactly the same shade as my opaques. 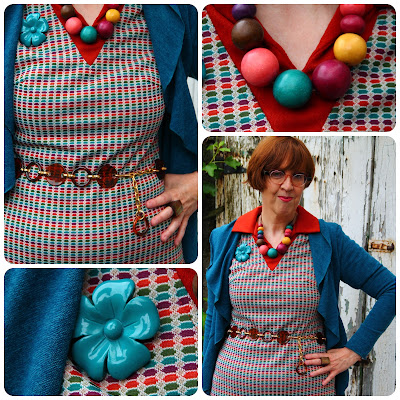 The temperature that day didn't climb higher than 13°C, so I never removed the darker teal waterfall cardigan - charity shopped in December 2019 - I threw on earlier to put the chills at bay.

I struggled a bit finding the right necklace to go with it, as nothing seemed to work with the dress's collar, so originally I just went with the flower brooch, bought from the Brooch Lady in April 2019. It was only at the end of the day that I thought of this wooden beaded necklace, which turned out to be just right. If it looks familiar, it's because I was wearing its slightly different coloured sister in my previous post!

The vintage chain and tortoiseshell plastic belt was a charity shop find in May 2019. 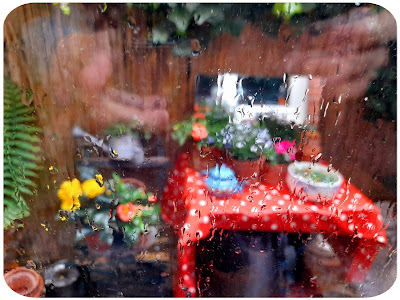 We had an early start that morning, as Jos was due at the vaccination centre just after 9 am. Instead of a leisurely breakfast, he  grabbed a quick sandwich, took the recommended dose of Paracetamol, and went off in the pouring rain.

With the sound of the rain pitter-pattering against the kitchen window, the rivulets it created all but obscuring my view, I breakfasted on a fruity medley of banana, juicy peach, grapes, strawberries and raspberries, keeping half for Jos to eat upon his return. Cradling a mug of ginger and lemon tea, my eye on the kitchen clock, I almost literally watched time go by until Jos sent me a text it was over and done with and he would soon be on his way home. 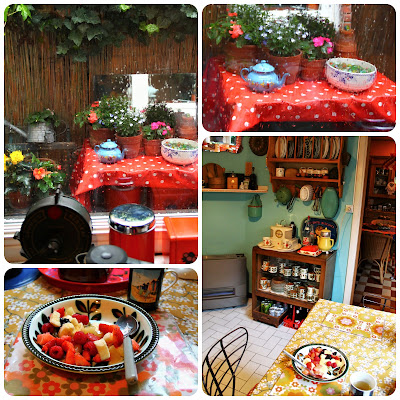 With still no let-up in the rain, I decided to crack on with the seemingly never-ending wardrobe changeover, this time concentrating my efforts on the shelves in my main wardrobe.

This was a quick and easy task, as I only had to take out the Summer stuff (a jumble of tops, jumpsuits and cotton skirts) which was lurking at the back of the bottom shelf and move the Winter stuff, mainly consisting of thick woollens, to the back. This gave me the opportunity to appraise every single item and put aside the no-no's for donation. 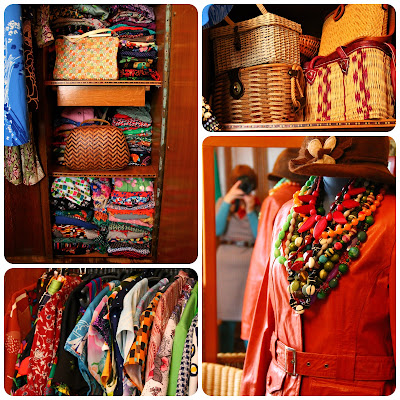 The middle shelves hold long-sleeved and short-sleeved blouses respectively and are being kept out all the time.

On the top shelf, a plethora of wicker bags hides a multitude of cardigans. I can't remember when I last used any of these bags, but it must be going on two years now. For the last couple of months, I have only been using the cork cross-body bag I charity shopped in February whenever we go somewhere, alternating it with the yellow leather bag - another charity shop find, from last September - for my office days. 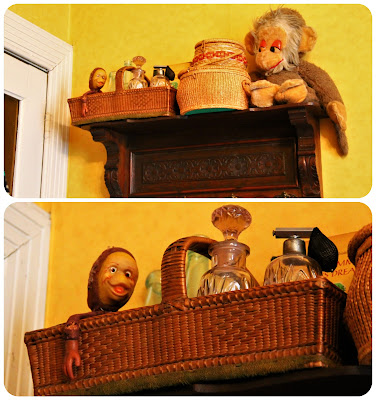 To the right of my main wardrobe, which is in our bedroom, is a hell-hole of a built-in cupboard which is stuffed to the gills. It is hiding behind the door you can just catch a glimpse of the cornicing of in the above collage.
Adjacent to it is a wall-mounted antique carved wooden coat rack for our dressing gowns. On top, in an ancient wicker basket bought in an antiques shop in Leominster, Herefordshire, lives my beloved childhood monkey Gustje, whom I've had since I was four years old. A cheap toy from a fairground stall, he is all but falling apart. Ear-less, leaking straw stuffing and with a wooden skewer holding his cheerful plastic-faced head upright, he is enjoying his retirement in the company of another monkey which came from Jos's side of the family. 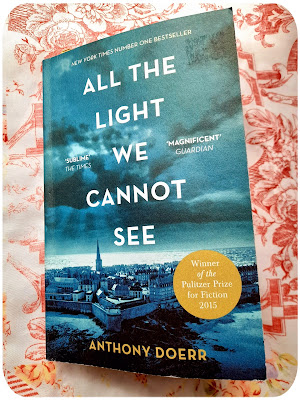 The afternoon was spent curled up on the couch with my current read. Recommended by three of my bloggy pals (Sheila, Sally and Vronni) after I shared my charity shop haul of books a couple of weeks ago, it went straight to the top of my reading pile. I'm just over half way in now, and I'm completely hooked. It's beautifully and imaginatively written and very haunting, and I can't stop picking it up and reading a couple of pages at the oddest of moments. 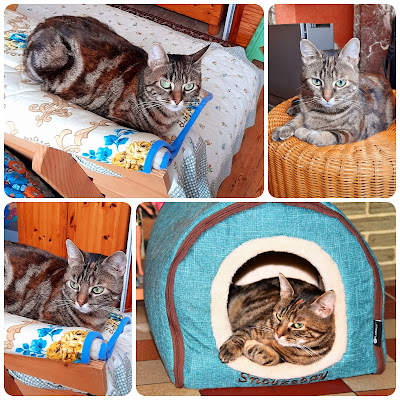 Now, before we proceed to Sunday, the 23rd of May, how about some cat spam?

Never having had a cat who actually made use of the cat beds provided by us, we can't help being delighted every time we catch Bess having a cat nap in her Snooze Bay. At the same time, it is odd to see here picking some of Phoebe's favourite places too, such as the back of the sofa in the spare room and the wicker footstool in the sitting room. 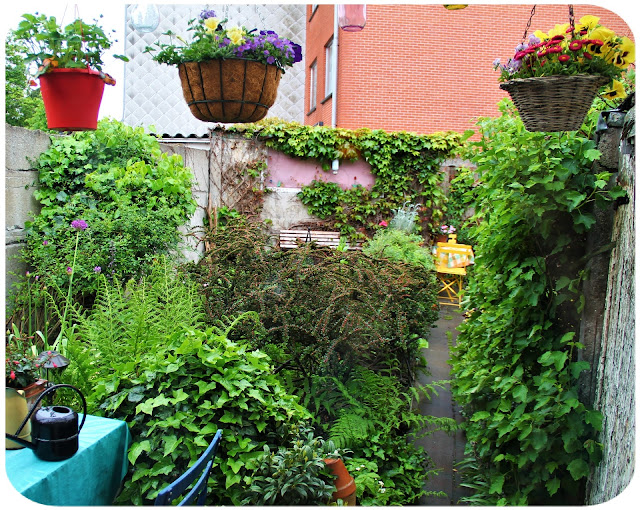 For once, we had a blue-skied and sunny start of the day on Sunday, The sun came and went a couple of times, and it was a bit windy so that it felt quite a bit chillier than the 16°C stubbornly indicated by the thermometer.

But who were we to complain, as mercifully, it remained dry for once! Nevertheless, the garden was still recovering from the watery onslaught of the past couple of days, so that I put off my plans for cutting back some of the ferns which will soon turn it into a minor rain forest. 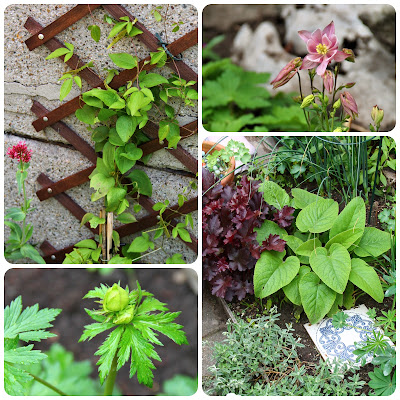 There's an upside to the maze of rainy days too, as everything is looking luxuriously lush and verdant.

A round of inspection revealed quite a few surprises. While the lavender flowered Clematis we planted last year seems to have given up its attempts to outwit the slug attacks, its cream flowered neighbour ('Guernsey Cream', top left) is making great progress in scrambling upon its designated trellis.  Aquilegia 'Biedermeier' (top right) is a mass of pale pink flowers, and the first flower buds are appearing in Trollius 'Orange Princess' (bottom left). 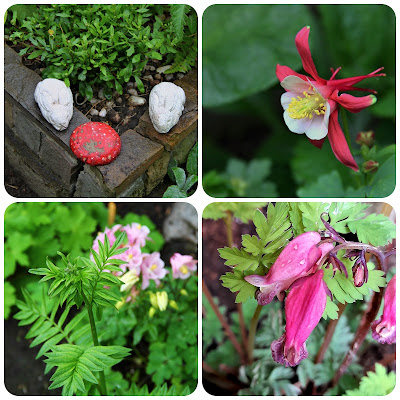 Aquilegia 'Crimson Star' (top right), while not as abundant as the pink ones, are doing well too. I wish the same could be said for the recently planted Bleeding Hearts (bottom right), but the poor things are suffering from slug damage. After having tried to catch some of the slimy creatures unawares, I'm afraid I had no choice but to revert to using eco-friendly slug pellets in the worst affected areas. 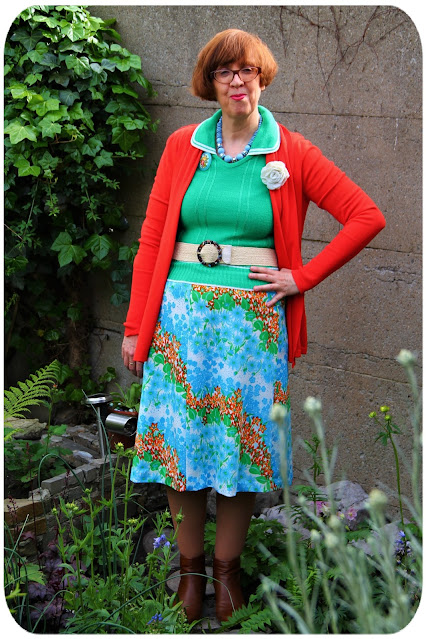 Although it may not be evident from the outfit photos, I did opt for short sleeves again that day, picking a green short-sleeved jumper with white accent stripes at the collar, cuffs and hemline.

Both the jumper and the skirt featuring diagonal bands of orange flowers and green foliage on a sky blue floral background, are vintage items found at Think Twice. The skirt originally had a matching blouse, which I sold on as it was too large for me. 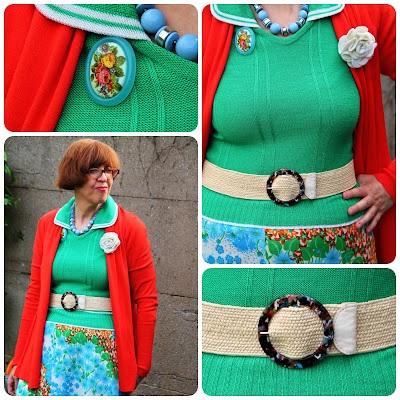 Apart from perhaps the sky blue beaded necklace, you've seen my accessories of choice many times before: the stretchy belt with its multi-coloured round plastic buckle, the blue-rimmed oval flower brooch and the white felted flower corsage pinned to my cardigan are all old favourites featured many times on the blog.

The bright orange long-line cardigan was a charity shop find from the tail end of last year. 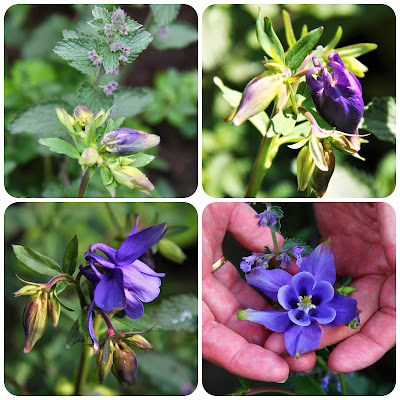 Another new-comer to the garden, and yet another Aquilegia, is the alpina variety, which might very well eclipse frilly 'Nora Barlow' as my favourite. Their vibrant violet-blue flowers, the tips of their petals tinged with a faintest of green, are absolutely stunning!

Apart from adding two more perennials to the borders, not much gardening was being done that day as, in spite of the sunny spells, a blustery wind soon drove us inside. Our garden's solar lights, however, lapped up every last ray of the available sunshine, treating us to a magical display once darkness fell. 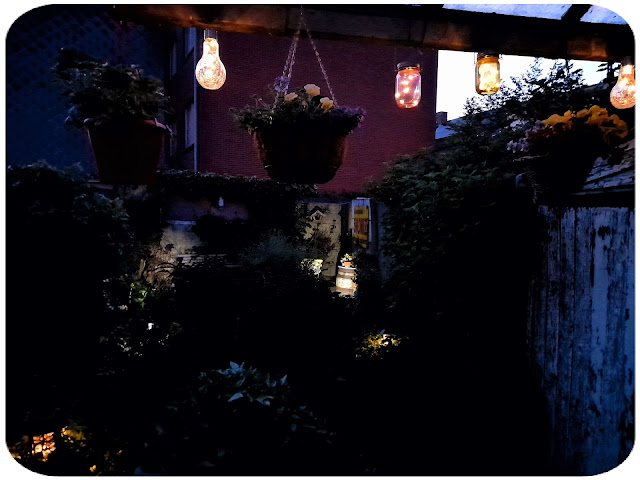 We can't wait to spend some warm Summer evenings out there!

Hope to see you next time!